The Curious Past and Uncertain Future of the Original 'Meander' - Atlas Obscura
Want to see fewer ads? Become a Member. 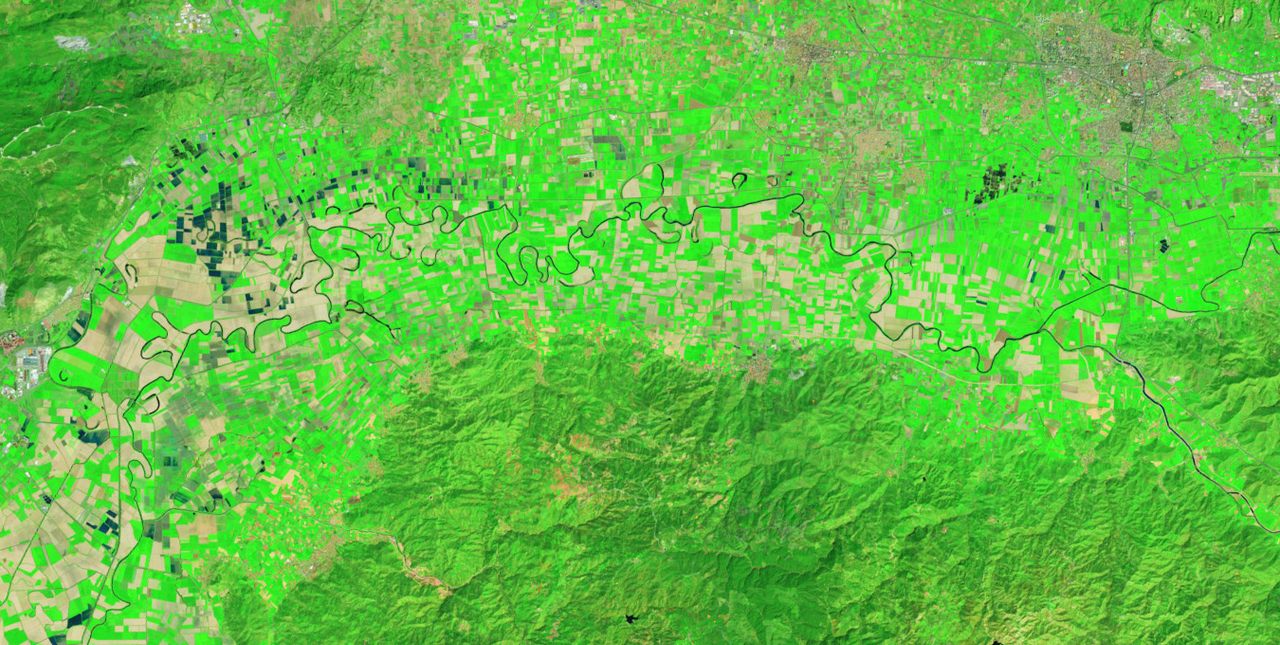 In a false-color satellite image, the winding Büyük Menderes is a dark ribbon snaking through the Turkish countryside, with many oxbow lakes—created when the river changed course—visible. NASA Earth Observatory/Public Domain
In This Story
Destination Guide

The water begins its 400-mile journey gushing from a spring tucked in a rocky Anatolian slope. Following the narrow channel, it rushes past grazing lands and olive groves, and then through a steep, half-moon canyon carved by the currents before it. The water then enters a flat valley that stretches to the Aegean Sea. Across this wide plain, it curves and curls like a dark snake. Along the way, smaller tributaries feed the flow. Other things enter the river: sediment, agricultural runoff, and chemicals from tanneries and other industries, all of which have an impact. But the river itself has also had an impact, one far beyond its banks.

This is the Büyük Menderes, the longest river to flow into the Aegean. In antiquity, it was known as Maíandros, and gave us the word “meander” to describe sinuous curves in a river or stream’s course, as well as a repeated pattern common in art and architecture. The river was important enough to be featured on some of the first coins ever minted, more than 2,600 years ago in the ancient Lydian city of Tripolis. The Büyük Menderes has also influenced its landscape, and the humans who depend upon it: Its waters have dumped massive amounts of sediment, moving Anatolia’s coastline roughly 20 miles west over the last 3,500 years, creating new lakes including the 10-mile-long Lake Bafa, and leaving once-vital trading ports high and dry.

For scientists, the Büyük Menderes is a source of continuous fascination—and puzzlement. The river’s meandering pattern even intrigued Albert Einstein, who in 1926 pondered the physical laws that might explain its serpentine curves. Despite its significance, the river is just a baby, and no one is quite sure why it has carved such a winding path.

“The river had a short course at the beginning,” says Ankara University geological engineering professor Nizamettin Kazanci, who coauthored a 2019 geological history of the Büyük Menderes. What are now its upper and middle courses were originally separate streams that fed into small lakes during the last Ice Age. At some point a little over 10,000 years ago, the streams joined, and flowed westward. Adds Kazanci: “The Büyük Menderes is a relatively young stream.”

It’s unclear what caused the different streams to unite into a single river—erosion is one possibility—but the river does run through a seismically active area. It follows a series of graben: long depressions, such as rift valleys, that form along faults in the planet’s crust.

Despite its youth, the river has built up, literally, some impressive achievements. In the span of about 3,000 years, it deposited enough sediment to fill what was once the Aegean’s longest estuary. That’s because the river carries a lot of alluvium: loose particles of silt and clay that are easily transported downstream. A combination of the graben—which Kazanci has described as having a “hoe-like” shape—and the large amounts of alluvium may explain why much of the Büyük Menderes has a curlicue course. The alluvium is both easily transported and easily eroded, and, unlike a steep slope, the shape of the graben allows the sediment to accumulate and form curves in the channel. Each curve redirects the water flow in a way that encourages an opposing curve to form downstream, resulting in the river’s wiggly course. “To my opinion,” says Kazanci. “The stream on a plain had to have a winding channel.”

The river’s course has changed frequently over the millennia. Satellite imagery highlights numerous oxbow lakes, earlier channels eventually cut off from the river by sedimentation. The largest lake the Büyük Menderes created, Lake Bafa, is not an oxbow, but rather a slice of the sea, cut off from the Aegean by sedimentation. Nearby are the ruins of the ancient port city of Miletus, which was built on an island but is now about six miles inland. The city, once a wealthy trade center, was abandoned in the 16th century after its harbor became hopelessly silted.

The river’s map-changing days are over, however. Dams have reduced the amount of sediment carried downstream and, along with drought and irrigation demands for thirsty cotton crops, have shrunk the river’s volume. At the same time, increased agricultural and industrial runoff have introduced high levels of heavy metals and other toxins into both the river and Lake Bafa, home to more than 250 species of waterfowl and the critically endangered European eel. The textile industry in particular poses a threat: A documentary produced by WWF Turkey described wastewater released from factories as hot enough—about 84 degrees Fahrenheit—that it “leaves no room for life.” Today, more than 10,000 years after the river began making its mark on the Anatolian countryside—and human history—what lies beyond the next curve in the river’s story is unclear.

The Alaskan delta, one of the world's largest, is a ‘mosaic’ environment best visualized with a psychedelic palette.
islands

A researcher says her award-winning image of a swirling school of fish is also a metaphor for the oceans' health.
lakes

The revival of Lake Menindee is the latest chapter in a battle over water management, environmental protection, and indigenous rights.
Video • PinDrop