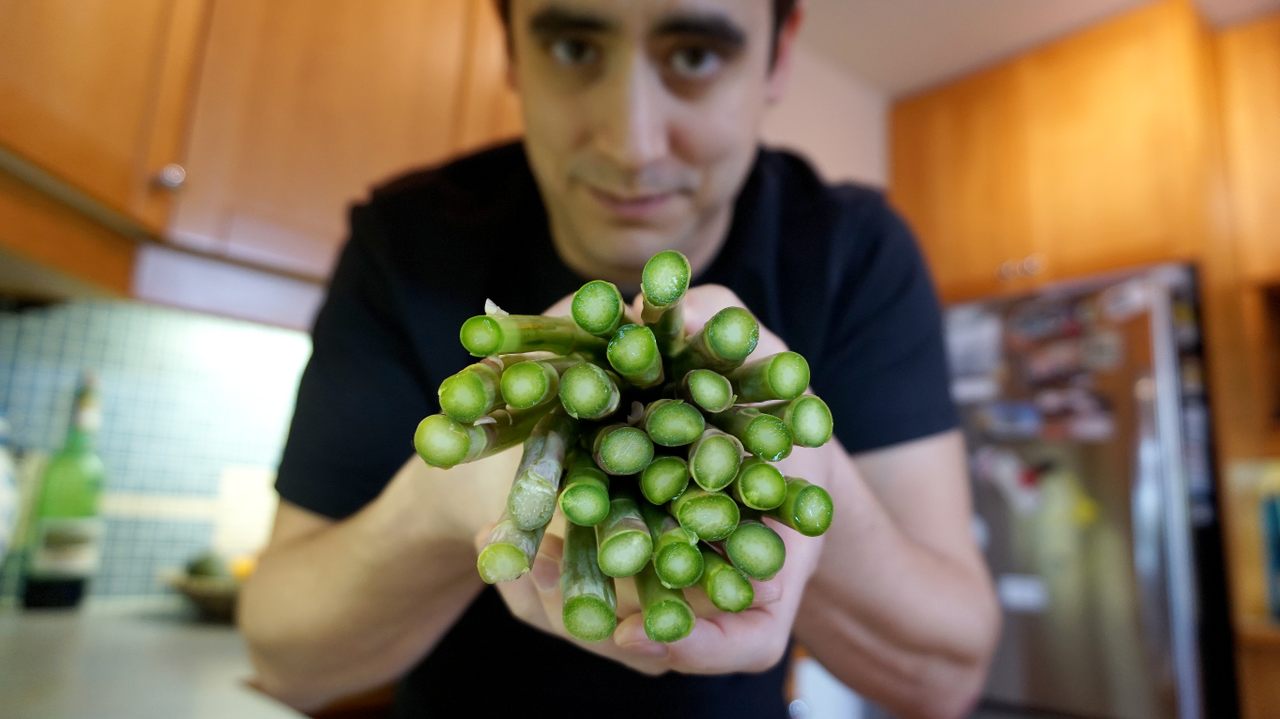 Pelling in the kitchen with asparagus, the veggie that inspired his work on spinal cord injuries. Andrew Pelling

His lab is filled with apples, asparagus, broccoli, celery, mushrooms, red peppers, strawberries, and tomatoes. “Honestly, it looks like a farmers market,” says Andrew Pelling. “I’m not joking … the students just go to the grocery store and buy whatever.”

Around 10 years ago, Pelling, a biophysicist, started thinking with his team about materials that could be used to reconstruct damaged or diseased human tissues. Surrounded by a rainbow of fresh fruits and vegetables at his University of Ottawa lab, Pelling and his team dismantle biological systems, mixing and matching parts, and put them back together in new and creative ways. It’s a little bit like a hacker who takes parts from a phone, a computer, and a car to build a robotic arm. Or like Mary Shelley’s Dr. Frankenstein, who built a monster out of cadavers. Except Pelling’s team has turned an apple into an ear and, most recently, a piece of asparagus into a scaffold for spinal-cord implants.

Pelling believes the future of regenerative medicine—which uses external therapies to help the body heal, the same way a cut heals by itself or a broken bone can mend without surgery—is in the supermarket produce aisle. He calls it “augmented biology,” and it’s a lot less expensive—by thousands and thousands of dollars—than implanting organs donated by humans, taken from animals, or manmade or bioengineered from animal tissue.

The seeds of Pelling’s inventions come from an unexpected source: the iconic musical and film Little Shop of Horrors. In the movie, a large plant, Audrey II, comes alive and survives on human blood. “I asked, ‘Could we grow Audrey II in the lab somehow?’” Pelling says.

Well-funded scientists don’t typically spend their time recreating Hollywood props, but Pelling, who attended a school for the performing arts as a child, describes this as “par for the course” for his lab. “Play is a key part of my scientific practice,” he says. “It’s how I train my mind to be unconventional and creative.” He encourages his team to goof off and try “weird biology.”

The plan for building Audrey II was to grow muscle cells onto a leaf scaffold and then grow a mouth. It didn’t work. At all. But Pelling says these kinds of “colossal failures” allow him to ask good questions and learn. The directive in his lab is to ask, “Can I change the environment of a cell and control its biology?” The Audrey II fail allowed him to ask whether muscle cells couldn’t grow on the leaf because its waxy coating prevented it from being properly decellularized.

So, Pelling switched from plant leaves to produce. “We spent two years goofing around,” he says, decellularizing fruits and vegetables and growing mammalian cells onto them. And, “it just kept working, working, working. It was hard to find something that didn’t work.”

Decellularization as a process for implantation is fairly new, developed in the mid 1990s primarily by Doris Taylor. By washing out the genetic materials that make an apple an apple, for example, you are left with plant tissue, or a “cellulose mesh,” explains Pelling. “What we’re doing is washing out all the plant DNA, RNA proteins, all that sort of stuff that can cause immune responses, and rejection. And we’re just leaving behind the fiber in a plant—like literally the stuff that gets stuck in your teeth.”

When Pelling noticed the resemblance between a decellularized apple slice and an ear, he saw the true potential of his lab games. If he implanted the apple scaffolding into a living animal, he wondered, would it “be accepted” and vascularize? That is, would the test animal’s body glom onto the plant cells as if they weren’t a dangerous, foreign body and instead send out signals to create a blood supply, allowing the plant tissue to become a living part of the animal’s body? The answer was yes. “Suddenly, and by accident, we developed a material that has huge therapeutic and regenerative potential,” says Pelling. The apple ear does not enable hearing, and it remains in the animal-testing phase, but it may have applications for aesthetic implantation.

Soon after his breakthrough apple experiment, which was published in 2016 and earned him the moniker of “mad scientist,” Pelling shifted his focus to asparagus. The idea hit him when he was cooking. Looking at the end of a spear, he thought, “Hey, it looks like a spinal cord. What the hell? Maybe we can do something,” he says.

When he imaged an asparagus spear in the lab, what he saw reminded him of blood vessels and the structure and organization of nerves and the spinal cord. It led him to ask the question: “Can we use asparagus and its vascular bundles to grow a spinal cord?”

To find out, Pelling implanted decellularized asparagus tissue under the skin of a lab rat. In just a few weeks, blood vessels flowed through the asparagus scaffolding; healthy cells from the animal moved into the tissue and turned the scaffold into living tissue. “The surprise here was that the body, instead of rejecting this material, it actually integrated into the material,” says Pelling. In the bioengineering world, getting that to happen has typically been a major challenge.

And then came the biggest surprise of all. Rats with severed spinal cords that had been implanted with the asparagus tissue were able to walk again, just a few weeks after implantation. “I just remember … total shock,” says Pelling of the night his researchers texted him to come see the rats ambling around the lab. “I mean, an apple to an ear, whatever. But, like a walking rat. Like, come on! This has got to be nonsense … [So], we did it again, and again to convince ourselves.”

While using asparagus tissue as scaffolding to repair spinal cords is not a “miracle cure,” says Pelling, it’s unlike the kinds of implants that have come before. Donated or manufactured organs are historically both more complicated and more expensive. Pelling’s implants were “done without stem cells or electrical stimulation or exoskeletons, or any of the usual approaches, but rather using very low cost, accessible materials that we honestly just bought at the grocery store,” he says, “and, we achieved the same level of recovery.” (At least in animal tests.) Plus, whereas patients usually need lifelong immunosuppressants, which can have negative side effects, to prevent their body from rejecting an implant, that doesn’t seem necessary with Pelling’s plant-based implants. And, so far, the plant-based implants don’t seem to break down over time like traditional spinal-cord implants. “The inertness of plant tissue is exactly why it’s so biocompatible,” says Pelling.

Originally, Pelling expected his asparagus experiments to be another of his goofs that lasted a few months. He believes he’s able to push scientific boundaries this way because he’s a man. “I’m half Chinese, but like, I look like a white guy,” says Pelling. “I’m a man in science. I do get away with more, and I’m held to different standards.”

In October 2020, the asparagus implant was designated as a “breakthrough device” by the FDA. The designation means human trials will be fast-tracked and likely begin in a few years. If all goes well, Pelling is confident that he’ll see humans walking around with asparagus scaffolding in their spinal cords well before 2040. Daniel Kraft, Chair of Medicine for Singularity University, whose background is in stem cell biology in regenerative medicine, describes Pelling’s work as “refreshing. It sparks a lot of imagination and inspiration.”

Pelling, who calls himself a biohacker, says he will continue pushing boundaries. “What I’m really curious about is if one day it’ll be possible to repair, rebuild, and augment our own bodies with stuff we make in the kitchen.”

Woods was prolific, but was largely forgotten for many years after his death.
objects of intrigue

The cucumber straightener was a marvel of British horticulture.
Video • Object of Intrigue