Why Were Medieval Europeans So Obsessed With Long, Pointy Shoes? - Atlas Obscura
Want to see fewer ads? Become a Member. 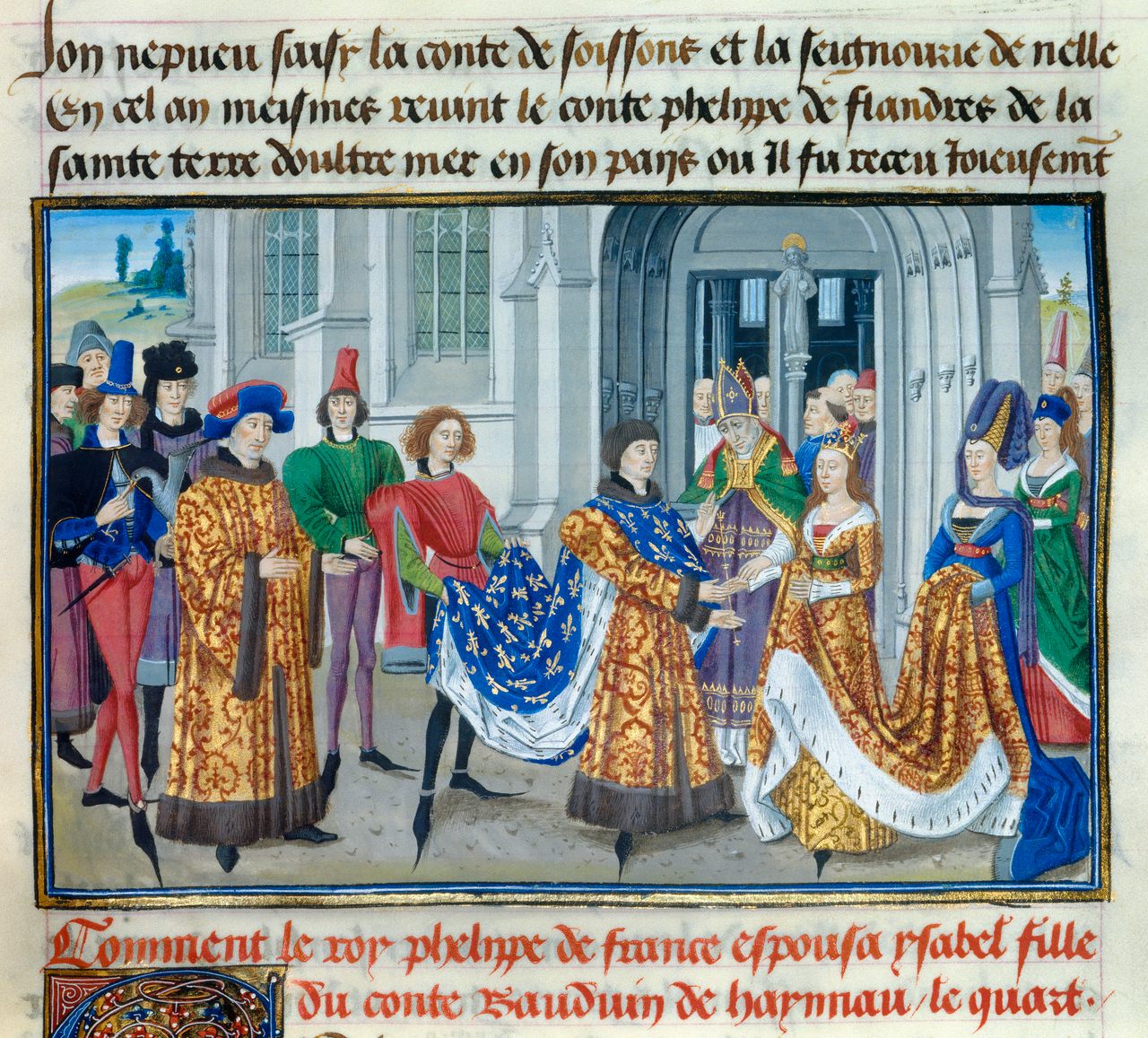 At a royal Parisian wedding the standard footwear was very pointy. Christophel Fine Art/UIG via Getty Images
In This Story
Destination Guide

In 1463, London outlawed the shoes of its fanciest men. These dapper lords had grown ridiculous in their dapperness, and had taken to ambling streets shod in long, carrot-shaped shoes that tapered to impish tips, some as long as five inches beyond the toe. These shoes were called “crakows” or “poulaines” (a term also used to refer to the tips alone), and the court of King Edward IV eventually found them offensive enough to pass a sumptuary law prohibiting shoe tips that extended over two inches beyond the toe.

Perhaps one of the silliest and most fascinating trends in medieval fashion, these shoes probably first emerged around 1340 in Krakow, Poland—both names refer to this origin—according to Rebecca Shawcross, the author of Shoes: An Illustrated History. Shawcross also serves as the shoe resources officer at Northampton Museum and Art Gallery in England, which claims to have the world’s largest collection of shoes (at 12,000 pairs, but alas, just one intact pair of poulaines).

Europe had flirted with long-toed footwear since the 1200s, but never to this length, or with this saturation. The lords and, to a lesser extent, ladies of 15th-century Europe wore these shoes almost exclusively for over a century. Every person who could afford shoes wore poulaines, though the longer tips were generally reserved for nobility who could afford to wander around in footwear seemingly designed for pratfalls.

For the glitterati of medieval Europe, poulaines were less a fad than a symbol. “If you were a man of status and you had enough wealth, you wanted to show that off,” Shawcross says. “And to do that, you had to take the toe to the extreme.” Shoes with absurdly long toes were expensive and would clearly impair the wearer from efficiently partaking in any kind of physical labor. So they were also an indicator of leisure and luxury, free of extraneous effort or the tyranny of practicality.

Poulaines—like babies or uncorseted bosoms—could not support themselves. In order to keep the tips erect, medieval shoemakers stuffed them with soft organic material, often moss, hair, or wool. “Without a stuffed toe, it gets quite floppy,” Shawcross says. “It doesn’t look like it would have been worn by someone of status at all.” The material also helped prevent the tip of the poulaine from curling when wet, according to Jackie Keily, senior curator at the Museum of London, which boasts one of the most impressive collections of poulaines. One shoe in particular, recovered from an archaeological excavation on the waterfront, boasts a modest tip but a delicate leaf pattern.

Another surviving example Shawcross mentions includes an uncomfortable-looking hunk of whalebone used as a stiffener (also a feature of high-end corsetry). Poulaines also had a sort of sex appeal, being cut to show off the colored hose around a lord’s ankle—considered quite sexy at the time. “It’s a time when tunics are getting shorter and young men would have been showing off their legs,” Keily says. “So low-cut shoes would have accentuated and elongated the leg, all down to that long point.”

Most poulaines that survive today were made of leather, but medieval Europeans would have used every possible fabric, Keily says. The upper echelons of society, for example, used embroidered textiles, velvets, and silks. Such shoes might be hand-painted or etched with intricate patterns. Though these opulent poulaines appear in many medieval paintings, no actual examples survive. The Museum of London has some of the fanciest known poulaines in its collection, all remarkably preserved by the saturated mud of the River Thames.

Poulaines stand out even more because medieval fashion was often governed by clean lines and a practical, chaste minimalism, Shawcross says. (Poulaines also marked a rare period in history when men’s fashion outshone women’s in terms of sheer frill, according to Keily.) Perhaps the best explanation for this confounding flamboyance is that the shoes emerged soon after the Black Death killed 30 to 60 percent of the population of Europe. “It may have been a reaction to a type of austerity,” Keily says. “The plague left a landscape with a lot of people who had lost close family members, a generation of mourning. Suddenly there were less people who had more money to spend on clothing.” So poulaines may have been a kind of retail therapy for coping with the surprise disappearance of 25 million people. Keily points to other fashion trends that followed widespread losses of life, such as the conspicuous designs that emerged in the 1950s and 1960s, following World War II.

By today’s standards, poulaines were a long-lived fad. But Shawcross says medieval trends often lasted for a century or more, due to the slow, protracted passage of culture across towns and countries, in the absence of any widely distributed media. Until the 18th century, fashions emerged at the top of society and then slowly trickled down, class by class, often taking years to reach rural areas.

Eventually, the English crown felt the need to intervene, in part because of the lascivious connotations that the increasingly extended toe-tips carried. “People thought the longer the toe, the more masculine the wearer,” Shawcross says. “But some people weren’t keen on that connotation.” Parliament equated wearing the shoes to public indecency, and stepped forward to put limits on a variety of racy fashions: “No person under the estate of lord, including knights, esquires, and gentlemen, to wear any gown, jacket, or coat which does not cover the genitals and buttocks. Also not to wear any shoes or boots with pikes longer than two inches. No tailor to make such a short garment, or stuffed doublet, and no shoemaker to make such pikes,” the 1463 law reads. The only other city known to have taken a stand against the shoes was Paris, which had banned them in 1368.

It was a fashion, and fashions come and go. By 1475, the poulaine had vanished, Shawcross says. Under the reign of King Henry VIII, European footwear made a hard pivot into the wide, box-toed shoes. In response, England later passed sumptuary laws restricting the width of these blocky shoes. “The king had men who would go around trying to catch people, measuring the width of their toes,” Shawcross says.

Pointy men’s shoes had a surprise reprise in England in the 1950s, with the nattily named winklepicker. Though far less extreme than the most dramatic poulaines, winklepicker wearers also stuffed the toes of their shoes with cotton or tissue paper to keep their tips aloft—like medieval lords. The style has had several revivals over the ensuing decades, and luckily for the British music scene, parliament has yet to make an official statement on winklepickers.

The Makeshift Mosques of Athens Are About to Disappear

The Glamorous Pearl Earring King Charles I Wore to His Execution

Since childhood, he refused to part with it.
objects of intrigue

In Guna Yala, indigenous women sew stories of legend, revolution, and even Minnie Mouse into the elaborate textiles known as molas.
objects of intrigue

A prescient relic of the Islamic Golden Age.
medieval

Found: A Fancy Baby Boot From the 14th Century

Archaeologists in Switzerland unearthed a fragment of a very small shoe.
Video • Object of Intrigue