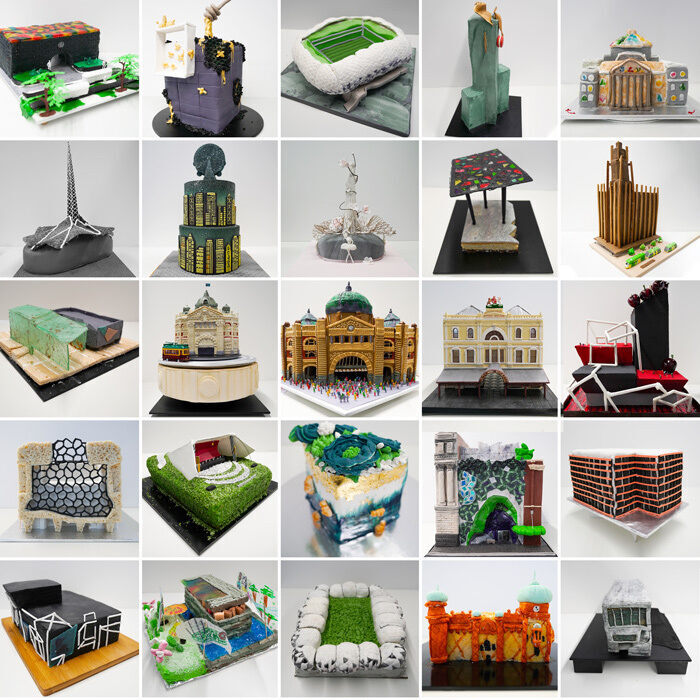 Feast your eyes. Courtesy University of Melbourne
In This Story
Destination Guide

If you’re an architecture buff, then consider the cake. Baking is really, in essence, just an exercise in engineering. Taste is only part of an equation that involves tricky feats of texture, temperature, and more often than not, a dash of visual panache.

Recently, to commemorate the 150th anniversary of its built environment education program, the University of Melbourne hosted a competition in celebration of the similarities between baking and architecture. “Batter, Bake & Build” challenged bakers to faithfully replicate iconic structures from Melbourne’s City Centre in cake form, and more than 140 contestants (many from beyond the university) answered the call. On August 17 and 18, judges from the University, as well as the culinary and architectural communities, narrowed the entries down to a shortlist of 30, then 12 finalists, and finally the five winners below, each one a feast for the eyes.

Noriel, a pastry chef in a self-described “love affair with Cake Decorating,” even added a mobile tramcar to her exquisitely precise rendering of the iconic train station. Flinders Street Station itself was based on a design that also won an architectural contest, back in 1902. Had a different design won, this cake would have never existed.

Nam, an artist, calls her Black Forest cake “Structures in Chaos,” and said it represents “the geometrical white frames of the Southbank Theatre.”

Sharyn Frantz of Blackbird Cakes took on quite a challenge by baking a building which fuses rather divergent architectural styles. Storey Hall, part of the Royal Melbourne Institute of Technology (RMIT) campus, was originally built in a classical style in 1887. Since 1995, it has sported an audacious modern annex.

Lee, an architecture student, used the Australian staples of Lamington cake and Vegemite to replicate Southbank’s Arts Centre. She said that the mixture of the two iconic flavors represents an ode to Melbourne’s multiculturalism.

To render the behemoth 12-story office building and shopping center, Choo—a self-described “architect by day; baker by night”—used sugar paste and ginger biscuit on the outside, chocolate ganache-coated lemon cake with Italian meringue buttercream and lemon curd on the inside.

Can the university hold a cake-eating contest next year? Asking for a friend.

The Founder of America's Earliest Lesbian Bar Was Deported for Obscenity

The British Bake Off That's Resurrecting a Forgotten Medieval Cake

And they're stingless!
dolphins

Researchers are hoping to use the opportunity to get a better handle on their language.
music

The Rise and Fall of North Carolina's National Hollerin' Contest

Hollers are sort of like the yodels of the American South.
Video • Gastro Obscura

These cake-laden tables fueled community meetings that helped bring Southern Jutland back into Denmark.
Want to see fewer ads? Become a Member.
Thanks for sharing!