Found: A Message in a Bottle That Went Clear Around the World and Back - Atlas Obscura
Want to see fewer ads? Become a Member. 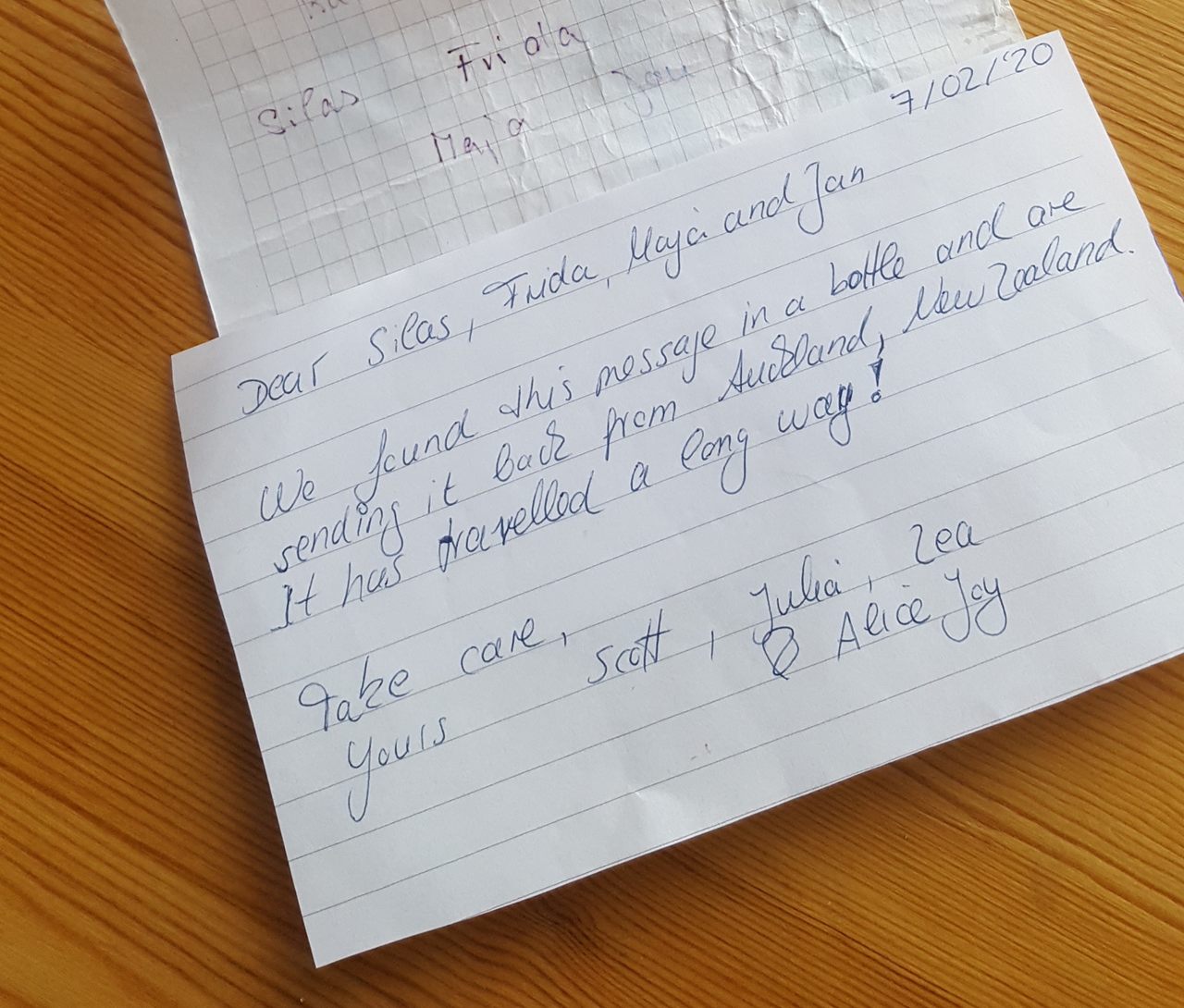 She didn’t say so to her kids, but Julia Gogos thought the bottle would get stuck in a shrub after just a few minutes. In the absolute best-case scenario, she figured, it might drift in the Rhine River for a bit and just wash up in the Netherlands.

Seven or eight years later (it’s hard for her to remember the date with precision), Gogos was stunned to learn that this unassuming message in a bottle—deposited in the Rhine near Bonn, Germany, by Gogos, her children, and a friend and her children—had traveled much farther than she could have imagined.

“Dear Silas, Frida, Maja and Jan,” begins a letter Gogos received in the mail, addressed to the four children. “We found this message in a bottle and are sending it back from Auckland, New Zealand. It has travelled a long way!” At first, Gogos didn’t even remember what the letter was referencing. Within just a few days of having sent the bottle on its way, she says, “I never thought about it again.” Her daughter, Maja, was so young at the time that she didn’t remember sending the message at all, and Gogos had to explain what the response was.

Gogos says she got the original idea when she received an invitation in the same bottle. It wasn’t the unusual method of delivery that inspired her so much as the bottle itself. It had certain qualities—flat and rectangular, not curving and bulbous, and turquoise, rather than clear—that called to mind images from children’s storybooks. Despite being made of plastic, it looked like it would have been right at home in the hand of a pirate. And that got Gogos thinking of another storybook trope: the message in a bottle. Her children—between four and seven years old at the time—were just the right age for those kinds of stories.

So, on a sunny day, Gogos, her friend, and the kids walked to the center of town and dropped the message-bearing bottle into the Rhine. “Dear Finder,” the message read, “Please send us a letter when you find our message in a bottle.” From there, the actual journey it went on is anyone’s guess.

The Rhine originates in eastern Switzerland, then flows through much of western Germany and the central Netherlands and into the North Sea. There are many ways to drift from the North Sea to Auckland, all of them long. Gogos, of course, has no idea which route the bottle took, but each imagined possibility is better than the last.

North toward the Arctic Ocean, and then around the entire top of Russia, through the Bering Straight and all the way through the Pacific? Or did it go via the English Channel, out into the Atlantic, and from there either around the Cape of Good Hope and through the Indian Ocean, or the other way past Cape Horn and the long way across the South Pacific? Could the Northwest Passage have been involved? Or the Panama Canal? Seven or eight years is a long time to be at sea. Whichever route (or routes, because maybe it went around twice), amazingly, the message was found within a few hundred miles of Bonn’s antipode—literally the opposite side of the planet from where it started.

Scott, Julia, Lea, and Alice Joy—the Auckland signatories—can’t answer these questions either, but Gogos and her family badly want to get in touch. Unfortunately, there was no return address, so the Gogos family has reached out via a Facebook post that has been shared nearly 2,000 times so far. “[We] would really like to thank them,” writes Gogos’s husband, Christian, in the post.

That the message has traveled to the far side of the world and back is “a little miracle,” Gogos says. So many things—weather, currents, sea life, there actually being people there where it washed up—had to happen just so. Imagine if the Gogos family had moved? There was even a mistake in the address written on the bottle message, so it’s a wonder that the reply arrived at all.

Scott, Julia, Lea, and Alice Joy: If you by chance get this message, too, the Gogos family wants to hear from you again.

How a fiery bowl of booze became a Christmas classic.
Want to see fewer ads? Become a Member.
From Around the Web
THE GASTRO OBSCURA BOOK
Taste the World!
An eye-opening journey through the history, culture, and places of the culinary world. Order Now