See Yourself As You Truly Are in This Mysterious Metal Mirror - Atlas Obscura
Want to see fewer ads? Become a Member. 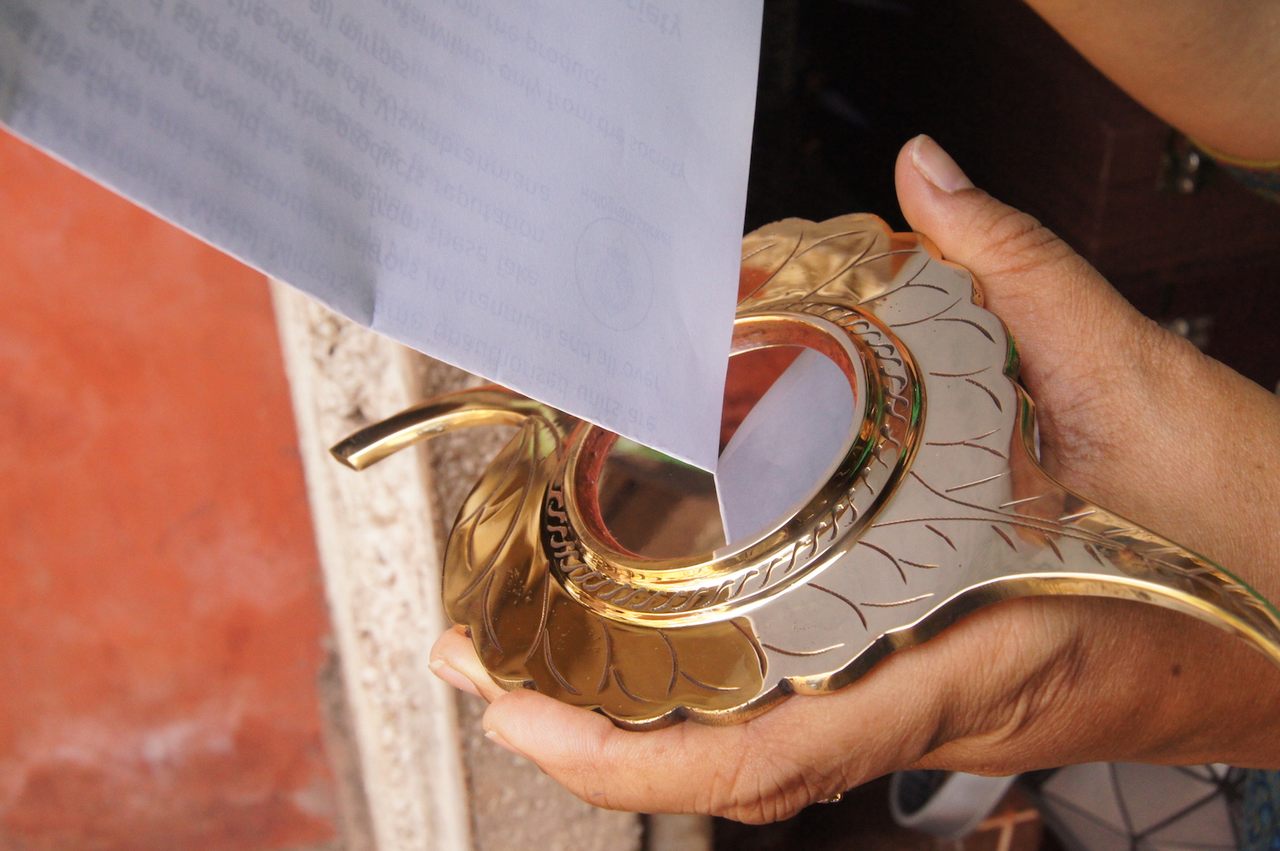 In Aranmula, Kerala, a heritage village on the banks of the Pamba river, a group of skilled, metal-casting artisans spend their days in hot and dusty workshops, crafting metal mirrors, a tradition that goes back five centuries.

For centuries, the craftsmen, who belong to the Vishwakarma community, have been working in the Aranmula Parthasarathy Temple. It is one of the oldest temples in South India, dedicated to Lord Krishna, an avatar of the Hindu god Vishnu. Originally, these artisans were known for creating exquisite bronze idols of deities. But around 500 years ago, they handcrafted a special mirror known as the Aranmula kannadi, which surpassed the idols as their most famous product.

It is believed that keeping an Aranmula kannadi in the house brings prosperity and luck to the owner. For this reason, it is given as a gift during weddings and housewarming ceremonies. People are typically intrigued that a mirror made of alloy has reflective properties like a plane glass mirror, and also surprised that the alloy is brittle.

As historical information related to the origins of the mirror are sketchy and unreliable, the legends have become the story told about these unique artifacts.

According to the main legend, centuries ago, the high priest of the temple noticed a crack on the crown of the deity. The King ordered the craftsmen to make a new crown in three days. The craftsmen were worried, as they didn’t have the requisite raw material. The head craftsman’s wife prayed and had a dream, in which the deity appeared and gave her the secret proportion for creating an alloy that would shine like a mirror. The next day, the women of the community surrendered their gold ornaments. The men sold them to buy the raw material and a crown was made. It shone bright, and when polished, showed reflective properties like a mirror. The crown was called the kannadi bhimbom (mirror image).

The King was pleased. The artisans then created a vaal kannadi (hand-held mirror) using a similar composition, which was popular with Kerala’s royalty and aristocracy. The King decreed that the mirror be part of the ashtamangalyam set, a brass plate featuring eight auspicious items that is used in religious rites.

The uniqueness of the Aranmula kannadi is that it is front reflecting, unlike plane glass mirrors where reflection takes place on the back surface of the glass, where the reflective coating is applied. In plane mirrors, light travels through the glass and back, so it gets refracted and changes direction. This can cause aberration or distortion of the image, and this distortion can vary depending on the quality of the reflective coating. In the case of the Aranmula kannadi, the light does not penetrate any refractive medium like glass: The reflection is on the top metal surface.

To this day, the composition of this alloy remains a closely guarded secret, passed from one generation to the next. Sharada Srinivasan, a professor at the National Institute of Advanced Studies in Bengaluru, has spent years studying the mirrors. He has concluded that its unmatched reflectivity comes from a specific copper-tin alloy with a high tin content–but that the true magic of the mirror lies not in the metal but with the artisans. “The challenge is that the alloy is brittle and breaks as easily as glass,” says Srinivasan, “and hence the skill of the traditional craftspeople lay in the ingenious methods of casting and manipulating the alloy using low-tech materials to get a high-tech product.”

In a thatched-roof workshop, with the summer sun bearing down and the fire from the furnace raising the temperature several degrees, the artisans toil, focused on their tasks. The process of crafting the mirror starts with the making of the alloy. The next step is molding, then casting the mold with the alloy in the furnace stoked by a fire. The molds are cooled and then broken, to reveal the rudimentary mirror that is formed from the molten alloy. This is then cut, filed, polished, and finally mounted on a brass frame. The entire process is time consuming and painstakingly done.

Creating the mirror is a relatively green process. The material used is eco-friendly and obtained locally. There is minimum waste and most of the material is recycled, as the mold bits can be ground again, and the alloy pieces re-melted.

Not long ago, the craft was languishing. According to Pazhani Gopakumar, secretary of the Viswabrahmana Aranmula Metal Mirror Nirman Society, which is a society of artisans, there was no patronage and no promotion of the product. In the past 15 years, however, there has been a slow revival. The industry suffered another setback in the fall of 2018, when Kerala experienced massive flooding, which damaged the traditional workshops, destroyed countless mirrors, and left debris on the paddy fields where artisans collect the mud used in production. But media attention after the floods helped the craftspeople rebuild.

Sheela Chandrachudan, an 81-year-old musician who is passionate about Indian crafts, owns a big kannadi, and has had it for the past 35 years. It occupies a place of pride in her home. Having moved several times over the years, she says, it is still in perfect condition. She laments the fact that many people from Kerala don’t know about the mirror’s cultural existence. She treasures her piece, now a family heirloom, and plans to pass the possession down to one of her daughters.

Aranmula kannadis are expensive. A small three-inch mirror costs, at a minimum, Rs. 3,000 (around $50). The price can go up to Rs. 100,000 (around $1,550) depending on the size of the mirror. Since they are expensive, cheaper fakes are flooding the market. These are made with tin sheets, and for a buyer, it can be difficult to discern if it is a genuine piece or a fake.

But like a plane glass mirror, this metal mirror does break. So for a non-expert, the only way of knowing if their mirror is genuine, and not a counterfeit tin version, is to drop it. If it breaks, well, it was a genuine mirror.

This story was updated in July 2022 to include current information about the science behind Aranmula kannadis and the state of the industry.

The Art of Dressing Mannequins in Rare and Historic Garments

This British Bird Is Watchful, Whimsical, and Very Victorian

The 19th-century ceramic work by London's quirky Martin Brothers is now smirking at museum-goers in NYC.
objects of intrigue

This traditional art from Guangzhou can never be produced legally again.
objects of intrigue

The Coast Salish wool dog has been extinct for a little over a century.
objects of intrigue

Meet the 'Comet Egg,' Which Definitely Did Not Come From Space

Investigating the old myth that cosmic events can have a fowl impact.
Video • Wonder From Home

3:09
Want to see fewer ads? Become a Member.
From Around the Web
Atlas Obscura Trips
India: Desert Festivals of Rajasthan
View This Trip
Thanks for sharing!