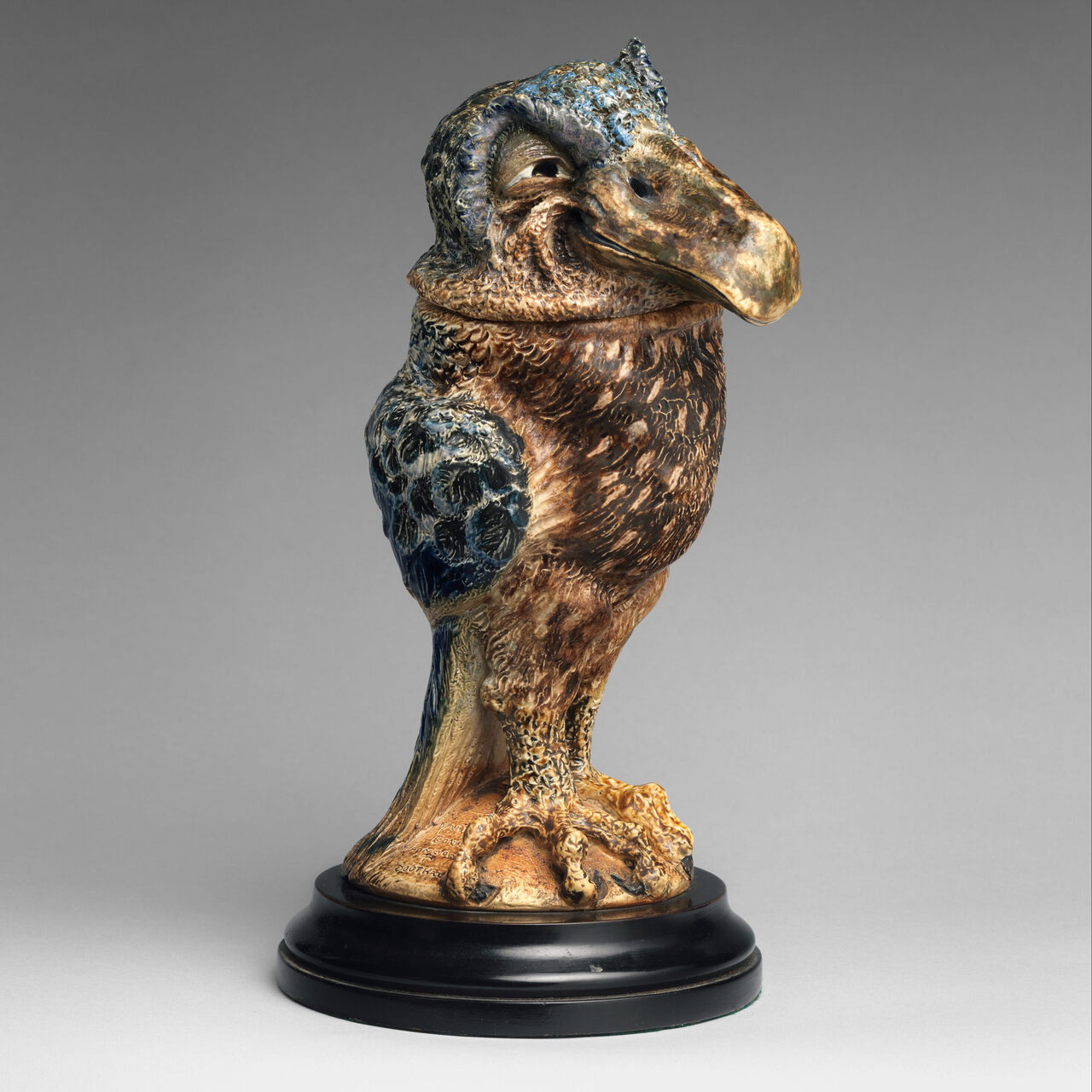 The strange ceramic jar from 1888 is on view in the Met's newly renovated British Galleries. Courtesy The Metropolitan Museum of Art
In This Story
Destination Guide

Walk past the perfectly preserved 17th-century staircase, the multitude of delightful English teapots, and the 700 other works of decorative art. Then turn to your right. That’s where you’ll see it, leering at you near the door: one very strange bird.

The foot-tall specimen on a glass-encased perch is a “Jar in the Form of a Bird,” a straightforwardly named but startlingly curious ceramic piece on view at the Metropolitan Museum of Art’s newly revamped British Galleries.

Dating to 1888, it traces its provenance to London’s Southall neighborhood. There, in the later part of the 19th century, an idiosyncratic potter named Robert Wallace Martin ran a ceramics shop with his brothers, Walter, Edwin, and Charles. Known, aptly, as the Martin Brothers, the quartet—who had grown up extremely poor—became successful and prolific for many years, turning out a wide variety of vases, sculptures, jugs, and more.

But the Martin Brothers were known especially for their birds. Nicknamed “Wally Birds” after Robert Wallace, who conceived them, the beaked creations are so expressive, it’s hard to ignore—or forget—them.

“The Wally Bird fixes its viewer with a gimlet-eyed stare, curling the corner of its enormous beak either in amusement or disdain,” writes Yale University art historian Tim Barringer in an email. “The viewer wants to laugh at this peculiar creation, but leaves the encounter with an uncanny sense of being watched.”

After training at the Doulton & Co. ceramics studio in Lambeth, the four Martin brothers banded together—with Robert Wallace as lead potter—in the early 1870s and opened their own shop in a former soap factory. The shop was “dusty and Dickensian,” says Met assistant curator Iris Moon, who oversees ceramics in the museum’s Department of European Sculpture and Decorative Arts. It was full of “odds and ends,” but became well known as the Martin Brothers’ reputation grew. By the end of the 19th century their pottery—made mainly with a porous, salt-glaze stoneware—had become popular with collectors, and even some wealthy patrons.

Perhaps this is because their work stood out in a time of mass manufacturing. The Martin Brothers, says Moon, “represent the fault line between industrially produced ceramics and the move toward studio pottery.”

The material they worked with was also special. “It was an old material used in England as early as the 15th century,” says Moon—very different from the bone china typically used in the era’s industrial ceramics.

The bird—technically a tobacco jar—on display at the British Galleries is certainly no exception. Deliberately showcased at the end of the exhibit, the grotesque anthropomorphic bird is seemingly waiting for visitors to notice it. When they do, says Moon, they’re usually surprised. “When you leave the galleries and turn to your right, you unexpectedly see this little guy winking at you—this smirking weird bird that you wouldn’t want to run into in an alleyway.”

Despite that vaguely sinister quality—and the decidedly muted color palette that typifies most of their pieces—the Martin Brothers’ pottery has only grown in value. In December of 2018, a particularly ghoulish, grinning crustacean made by the Martin Brothers in 1880 made headlines when it was sold at the Phillips auction house in New York City for $275,000—the highest price a Martin Brothers piece has ever fetched at auction.

“The human face that [Robert Wallace] has locked within the body of a crab wears an expression of faux jollity mingled with embarrassment and even terror,” states the catalog essay accompanying the piece on the Phillips website. “That [he] has managed to convey such a subtle mix of human emotions, in the context of a grotesque composition, is a tribute not only to his awareness of the philosophical angst besetting contemporary intellects, but to his technical ability to translate this angst into common stoneware.”

The Wally Bird at the Met’s British Galleries, which was acquired from the Robert A. Ellison collection of European pottery, does not have a sale price listed—but you can bet it went for more than a song.

A Tale of Survival, Wrapped in a 19th-Century Reindeer-Skin Sleeping Bag

Twenty-five travelers departed for the Arctic. Six made it home.
museums

Thanks to support from the community and the world, the Doctor Who villain is rising again.
nazis

The Museum Where Racist and Oppressive Statues Go to Die

Germany has found ways to display problematic monuments without elevating them.
museums

Why Doesn't Iceland Have a Museum of Napkins?

An investigation.
Video • Wonder From Home

Masks, ventilators, and Zoom recordings may one day be the artifacts of our time.
Read more
Thanks for sharing!