Beautiful Miniature Books That Are Worth Sacrificing Your Eyesight For - Atlas Obscura
Want to see fewer ads? Become a Member. 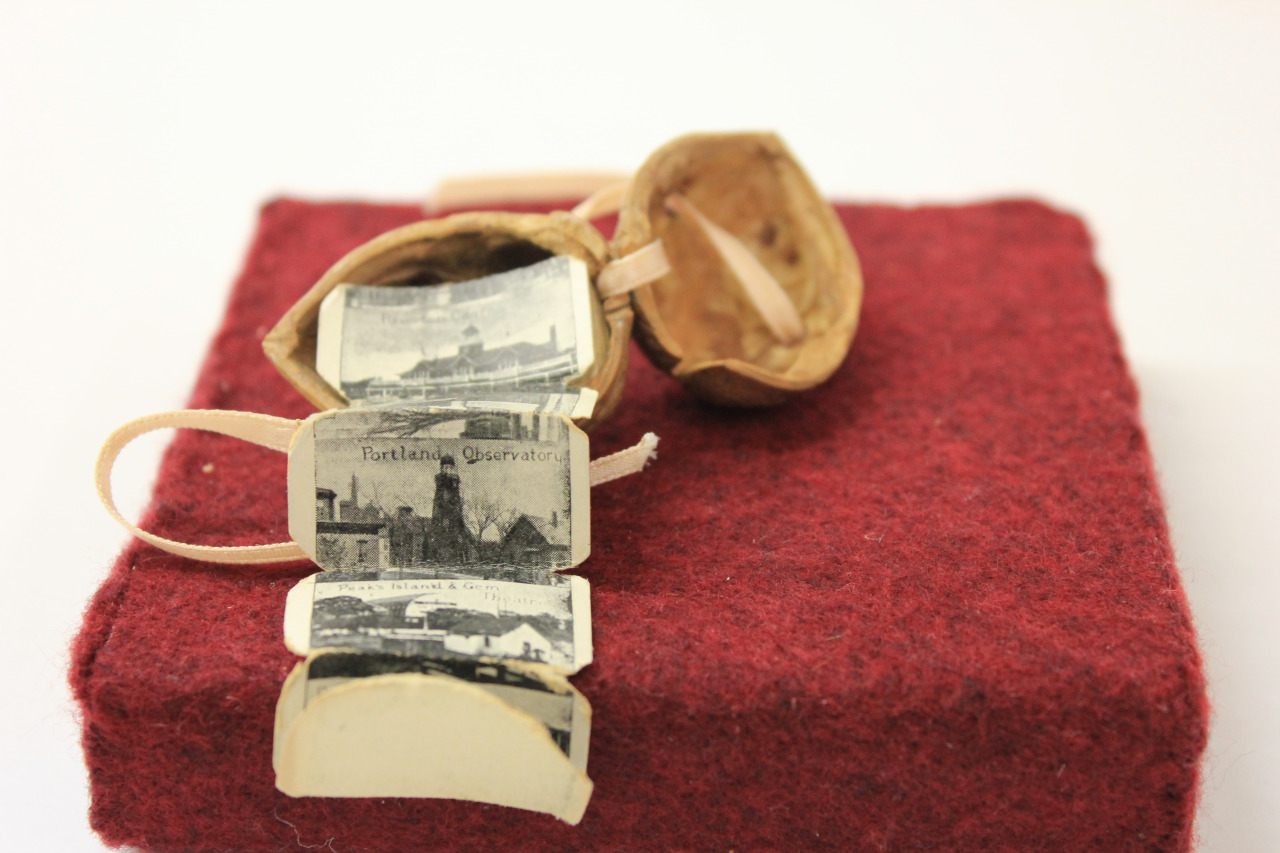 Popular in the early 20th century as souvenir books, these tiny books of travel photos (Maine, in this case) had tags attached so they could be dropped in the mail. Laura Hampton/University of Iowa Special Collections

In 1896, the Salmin Brothers, a Padua-based publishing company, produced Galileo a Madama Cristina de Lorena (Galileo’s Letter to Christina). It had an embossed cover and slipcase, but it had another, exceptional feature: It was sized at just 0.7 by 0.4 inches. Within, the text is printed in “fly’s eye type,” which is so small that when the Salmin Brothers first used it, for Dante’s Divine Comedy, it reportedly damaged the eyesight of the typesetter. This time, it was used in a title about one-third the size of the previous example—the smallest book ever printed with hand-set, movable type.

Galileo’s tiny tome is just one of some 4,000 miniature books held at the University of Iowa, most of which were gifted to the institution from a single collection. The donor, Charlotte M. Smith, was an avid collector of rare books, but as volumes began to overwhelm her bookshelves, she turned to miniatures. Her first purchase was a 3.75-inch-tall edition of Clement Clarke Moore’s A Visit From St. Nicholas (more commonly known by its opening line, “‘Twas the the night before Christmas … ”).

Admittedly, this title would not now be classified as a true miniature, which must be three inches or smaller. And it seems positively gargantuan compared with the books on the tinier end of the scale. The University of Iowa holds a collection of what are known as “ultra-microminiatures” (measuring less than 0.25 inches), including a Book of Genesis that can be worn as a pendant and read only with a magnifying glass. (The world’s absolute smallest—Teeny Ted From Turnip Town—was etched using an ion beam at Simon Fraser University and requires a scanning electron microscope to read.)

If there are challenges to reading some miniature books, just consider the process for creating them. “Working with the type, creating it and cutting it, setting it, and proofing it, seems be one of the biggest challenges,” says University of Iowa special collections librarian Colleen Theisen. “Remember, you set type backwards and upside down. Now add on the challenge of trying to do that when it’s a two-point font and still ‘mind your p’s and q’s!’”

Given these functional constraints, what is the point of books so small? For starters, says Theisen, “They’re darned cute. We humans seem to be obsessed with cute things.” From cuneiform tablets to tiny medieval texts to the intricate little books produced today, small manuscripts have an enduring popularity.

But miniature books also have practical uses. It’s convenient to have a pocked-sized almanac of key dates, for example, or religious texts for devotional reading. “Just like an e-reader, small books have always been better for reducing weight while traveling,” says Theisen. “Napoleon famously had a traveling library that fit in a small box.”

Small books have also lent themselves to use as contraband. In 1832, American’s first book on contraception, The Fruit of Philosophy, or The Private Companion of Young Married People, was published in miniature for easy concealment. Despite these efforts, its author, Charles Knowlton, was prosecuted for obscenity, fined, and sentenced to hard labor.

From religious texts to fairy tales, Shakespeare to flirting guides, there’s a miniature book for every subject, ready to be concealed, collected, or carried. Atlas Obscura delved into the University of Iowa’s Charlotte M. Smith miniature book collection, which is also documented in the library’s “Miniature Mondays” blog posts—to bring you a selection of itty-bitty reading material.

The Scandalous Life of Nurse and Adventurer Kate Marsden

She spent 11 months trekking to Siberia to find a cure for leprosy, but her love life overshadowed everything.
miniaturesvisualphotographybooksliteraturecollections

Open the covers to a world of holloways, moonlit leaves, and forest creatures.
objects of intrigue

Distinctive designs from the "Golden Age" of roller-skating.
models