Can the Mighty Bankhar Dogs of Mongolia Save the Steppe? - Atlas Obscura
Want to see fewer ads? Become a Member. 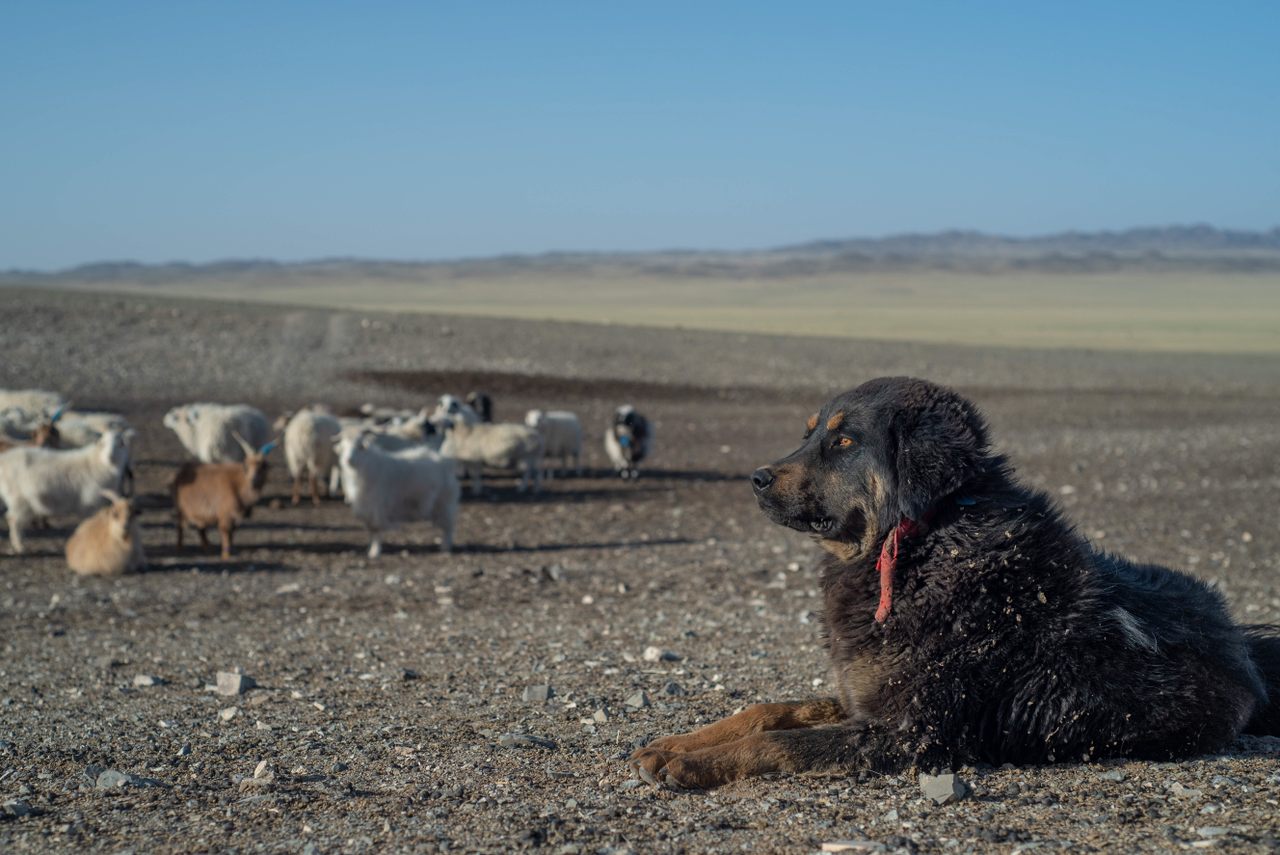 For 15,000 years, bankhar dogs protected livestock and livelihoods on the Mongolian steppe. Nearly lost, the revered dogs are making a slow comeback. Soyolbold Sergelen
In This Story
Destination Guide

On the Mongolian steppe, there are predators, there are prey, and there are the bankhar. These large, powerful dogs weigh up to 125 pounds, with shaggy, thick coats that give them a bear-like appearance. For 15,000 years, bankhar dogs have been the guardians of the steppe.

In these grasslands, sheep and other livestock kept by traditional nomadic herders are under constant threat from wolves, eagles, and even snow leopards. For millennia, the bankhar safeguarded both animals and the family’s livelihood. In acknowledgement of their importance, bankhar dogs are the only animals that nomadic herders name. The bond is so special that herders believe humans can be reincarnated as bankhar, and bankhar as humans, another unique honor.

“What our ancestors used to tell us, and what our elders used to say to us, and what we believe in the community, is that having a bankhar is spiritually beneficial,” says traditional nomadic herder Nasantsetseg Battulga, through a translator. “There are four people in my household but, if we add our two bankhars, we consider ourselves a family of six,” she adds.

That special connection between herder and bankhar dog was nearly lost, along with the bankhar itself. Soviet-era socialist campaigns that sought to collectivize herds and encourage families into more sedentary patterns of subsistence had no place for the dogs. Let loose, exterminated, and turned into fur coats for fashionable Muscovites, the bankhar all but disappeared. The dogs survived only in isolated pockets scattered around the country.

When nomadic families began returning to their traditional way of life in the 1990s, it was without the guardian of the steppe. Without bankhar to protect livestock from wolves and other predators, herd losses increased, so the nomads began keeping more animals just to make a living. Larger herds, along with increasingly severe winter storms and temperatures, have led to extreme desertification of the steppe. Combined, these economic and ecological pressures threaten to do what the Soviets could not: wipe the nomadic traditions off the map.

Now, an ambitious project aims to return bankhar dogs to their traditional role as livestock guardians. It’s an endeavor that may also give the Mongolian steppe, and its rich cultural traditions, a chance to thrive again.

Bankhar dogs evolved in this often harsh environment. They are not a breed but a landrace, meaning they adapted over generations with little human intervention. In addition to their size, bankhar dogs have a few unique characteristics: extremely dense coats, relatively small feet that stay warmer in winter, and caloric requirements lower than that of a similarly-sized Western guardian breed, such as the Great Pyrenees.

The dogs don’t herd livestock like, say, border collies, but they do shift the animals as a group across the landscape, which reduces overgrazing. Bankhar live with, sleep with, and fiercely protect their herds; just their presence is enough to discourage most predators. When wind brings the scent of danger, bankhar dogs mark their territory, creating an invisible boundary of urine and pheromones. And they bark, a lot. An old nomadic saying, “I can’t sleep without the dog barking,” reflects the wisdom that something is surely very wrong when the dogs fall quiet.

Since the 1990s, herders without bankhar dogs have resorted to less effective tactics, such as scarecrows, lights, and guns, to keep their livestock safe. It’s a losing battle: Even with these defenses, wolves and other skilled predators can kill more than half a dozen animals a night, taking a chunk of a family’s annual income with them.

With a bankhar, everything is different. Humans, livestock, and the environment benefit. When herds become less attractive prey, there is a reduction in conflict between humans and wild animals. Less likely to be shot, predator populations stabilize, which in turn balances the steppe’s ecosystem—and may even protect species such as the critically endangered saiga antelope. Meanwhile, with livestock protected and losses minimized, a herder derives the same revenue from a smaller herd. And with fewer livestock on the landscape, the steppe recovers faster from grazing and trampling.

The only thing missing from this potential solution to many of the steppe’s problems was the dogs themselves. To that end, Bruce Elfstrom, a biologist and filmmaker with almost two decades of experience in Mongolia, launched the Mongolian Bankhar Dog Project in 2014. By breeding and distributing the dogs, he believed the initiative could help nomadic families, decrease the impact of livestock on the Mongolian steppe, and revitalize indigenous traditions disrupted during the Soviet era.

“If we can stop their animals from being preyed upon, (herders) will hedge their bets less,” Elfstrom says. “They know if they have a dog they don’t need as many animals.”

Now, with 20 genetically diverse breeding males and females at a facility outside of Ulaanbaatar, the Mongolian Bankhar Dog Project is slowly rebuilding the bankhar population. On average, they distribute around 15 bankhar puppies annually. Nonprofit partners such as the World Conservation Society’s Sustainable Cashmere Project often use the gift of a bankhar to incentivize families to join and stick with projects combating desertification and protecting endangered species.

In 2020, on the southern edge of the Gobi Desert, the Mongolian Bankhar Dog Project established a new partner breeding site at the ecotourism hub Three Camel Lodge to better engage with herders in the region. “We were so familiar with the families in the Gobi and the need around us, it just made sense,” says Undraa Buyannemekh, president of Three Camel Lodge’s sister company Nomadic Expeditions.

In December, Three Camel Lodge had their first bankhar litter. Soon after birth, the pups were placed in a large fenced enclosure with sheep and goats to begin learning their life’s work. Those that are successful students will be placed with families at around five months of age. It’s not nearly enough to meet demand, but it’s a start. “We could breed 10,000 of these (dogs) a year and still give them all away,” Elfstrom says.

The project’s results so far are impressive. Since receiving her dogs Hotoch and Bankhar in 2018, Battulga hasn’t lost a single animal from her thousand-head herd to predators. Khishigtogtokh Budsuren, a candidate for the one of the Three Camel Lodge puppies, is hoping for a similar outcome. Wolves have killed so many of his sheep, goats, horses, and cows that he’s lost count.

“It will be really helpful to protect the livestock and it will help us in our everyday labor. We could leave the bankhar dog with the herd and it will protect them,” Budsuren said through a translator, via email.

In time, the hope is that the bankhar dog population will rebound to the point where a formal breeding project is no longer needed. Instead, herders will exchange animals, and knowledge about them, among themselves, as their ancestors did for millennia.

“The knowledge to train these dogs can only be passed by practice and by doing it,” says Buyannemekh. “And that’s the best way probably, making sure that cultural expression is being sustained for future generations.”

On the Arabian Peninsula, Jubbah holds clues to how humans adapted in the past.
holiday

Don't forget about Big Al the Alligator and Scramble the Duck's predicting powers either.
floods

Beavers can reshape the North American ecosystem—if we let them.
animals

The artificial nests could shield the endangered seabirds from rising temperatures.
Video