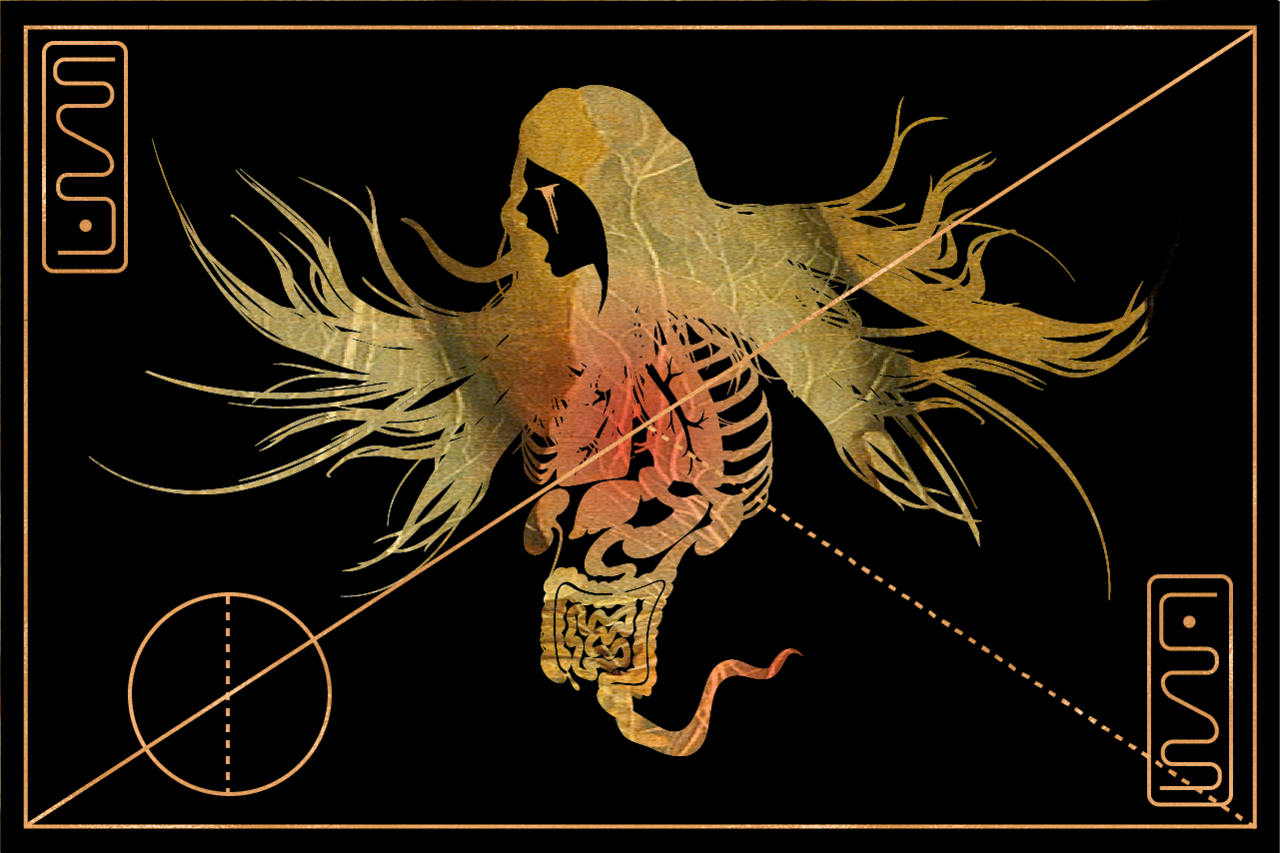 A young mother is rocking her newborn to sleep when suddenly the smell of vinegar fills the air. She quickly pulls the curtain back, and sure enough, the disembodied head of a woman is floating just outside the window, with long, finger-like tendrils slithering out toward her child. In a panic, the mother slams the window shut, just before the apparition reaches her, and breathes a heavy sigh of relief.

While folkloric monsters are numerous in Southeast Asia, one flying head soars above the rest: the Malay penanggalan, a vampiric creature that, by night, detaches its head and organs from its body to go hunting for humans. To her victims, she appears as a detached head with a long, invisible tongue and exposed, tentacle-like entrails. As pervasive as she is terrifying, the penanggalan has popped up throughout Laos, Cambodia, and Thailand, down through Malaysia and throughout Indonesia and the Philippines. She goes by different names and carries conflicting stories, but one thing is constant: She’s always hungry.

In Malaysia, where she’s also known as the Hantu Penanggal and Balan Balan, she’s alleged to be the product of women who’ve dabbled in black magic. As the legend goes, in return for keeping a vegetarian diet for 40 days, a woman is granted exceptional beauty. But upon breaking her meat fast early, the woman is cursed to spend her nights as a grotesque creature with an unquenchable thirst for pregnant women and newborns.

Naturally, she seeks work as a midwife, where she coddles her meals by day and haunts them by night, floating outside their home and using her invisible tongue to snatch the infant through the windows or using her intestines to reach up through the floorboards. Parents hoping to avoid a kidnapping are encouraged to lock their doors and windows at night, and cover seams throughout the home. Or, for a more proactive approach, one might seek out the monster’s headless body and fill it with glass, so that upon her return, the penanggalan will die while attempting to reattach herself. The key giveaway of a penanggalan is that she smells like vinegar, as she has to soak in the liquid to shrink her innards enough to fit back into her body. (Other versions of the tale also suggest that a woman can only become a penanggalan by meditating in a vat of vinegar.) So the ambitious might follow that sour scent back to her home, and then wait until the sun goes down and she drifts off in her monstrous form.

Another option is to follow the model of a popular Malaysian folktale. Recounted in 1834 by Officer Peter James Begbie, who served in the region as a part of the East India Company’s Madras Army, is the tale of a Malay man with two wives with different skin tones. Upon suspecting his wives of being penanggalan, he hatches a plan and tells them he is leaving for a trip. Believing he is gone, the penanggalan transform and go out hunting. The hiding husband then switches their headless bodies, which the wives do not notice upon returning from their feast. One can only imagine the confusion (and either hilarity or horror) of the next day, when each wife showed up with her head attached the wrong body.

Stories of the penanggalan persist today, but Malaysian documentary filmmaker Justin Ong suggests the legend really belongs to past generations, mostly in rural areas. He adds that it is likely a variant of the pontianak, a spirit with the same motives but more tragic origins: Most stories state she is either the spirit of a woman who died in childbirth or a stillborn child. Other versions of the legend suggest a more violent death and a desire for retribution. Unlike the penanggalan, the pontianak appears as a beautiful woman with long hair and pale skin who smells like a plumeria flower, which helps to mask her rotting flesh. Also unlike the penanggalan, she doesn’t expose her own innards, but rather her victims’ to eat.

Variations spawn from there. The penanggalan is likely the same monster as the Laosian kasu, Cambodian ahp, Thai krasue, Filipino manananggal, and the Balinese leyak, all of which are associated with childbearing and birth.

Take the Sumatran palasik. One local Indonesian woman, Azka Namirah, explains that the palasik isn’t a flying head or a beautiful woman, but rather a normal, old woman, whose only tell is that she doesn’t have a philtrum, the little groove between the nose and upper lip. The woman recalls a story her grandmother told her about encountering a palasik as it feasted on a young child. Fortunately, she says, her grandmother chased the palasik off, and the child was treated and saved by a shaman. (Those looking to stop a palasik should know that the creature is partial to its own family, and can be dissuaded by telling her that her prey is actually her own grandchild.)

Another variation comes as the manananggal in the Philippines. While typically female, it isn’t always. It also doesn’t expose its entrails, but rather detaches its entire upper torso and sprouts wings. One local, John Villegas, explains that it’s mostly a provincial superstition, but added that it is a favorite scary story among grandmothers, including his own. He further differentiated this creature as a scorned lover who hunts brides and grooms out of jealousy.

No matter the penanggalan’s form or name, they seem to hover around the anxieties of risky childbirth in remote, rural areas. Most agree it is a spirit to be avoided at all costs—lest its floating head be the last thing you see.

To believe in them and other djinns is to acknowledge there is a world beyond our own.
forests

At least until Christian missionaries made them more purely devilish figures.
mythology

It was an English "translation" that turned a wise, if mischievous, figure into a bloodsucker.
Read more
Thanks for sharing!