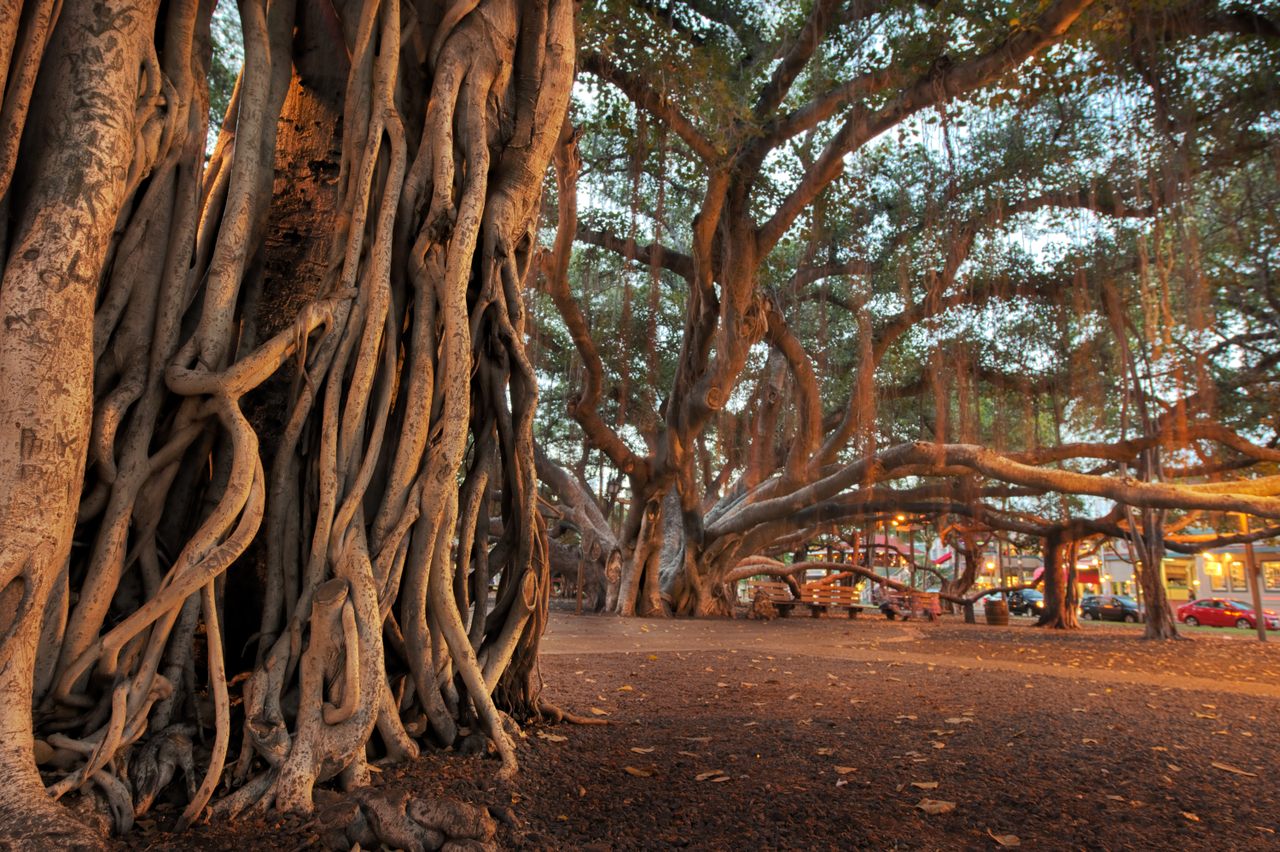 An exceptional Indian banyan growing in Lahaina Courthouse Square in Maui. Samantha Levang/CC by 2.0
In This Story
Destination Guide

According to the state of Hawaiʻi, all trees are important. But some are more than that. Some are exceptional. There are certain requirements to attain this designation, according to the state’s Exceptional Tree Act. Is a tree big, old, or—better yet—rare? Is it located somewhere unusual? Does it have a particular, unique aesthetic quality not seen in other trees? Is it endemic to the state? If it meets enough of these standards, it just might be exceptional.

For Hawaiʻi’s trees, this is no empty title. The state legislature passed the Exceptional Tree Act in 1975, responding to community calls to save the islands’ trees from deliberate damage or destruction. Local environmental groups, including the Mokihana Club of Kauai and The Outdoor Circle, lobbied hard in favor of the act. The program was likely the first of its kind in the nation, according to Myles Ritchie, programs director for The Outdoor Circle. Now the state of Washington has a similar program.

Before a tree can be named exceptional, it must pass a stringent vetting process. Though the act lists seven possible criteria—age, rarity, location, size, aesthetic quality, endemic status, and historical or cultural significance—a tree need only fulfill one for a chance to be named exceptional. But most trees don’t stand a chance. “In order to maintain the high standards set for the program and prevent diluting its reputation, only truly exceptional trees will be added,” Ritchie writes in an email. “The nomination and approval process can last several months.”

You can check out every exceptional tree in the state on The Outdoor Circle’s interactive map and database.

The first exceptional tree in Hawaiʻi became exceptional in 1975, after the Mokihana Club rallied to protect a large banyan tree on Kauai. The Indian banyan planted by the Moana Surfrider resort in Waikiki Beach was another early entrant. Planted as a mere seven-foot sapling in 1904, the banyan’s canopy has grown into a green-crested chandelier that towers over the hotel’s courtyard. Now 75 feet tall and 150 feet wide, its multiple trunks ripple out among the guests.

Trees can be added or removed from the list only once a year, during the annual ordinance change. As expected, new trees regularly join this exclusive club. By the same token, some trees inevitably lose their exalted status if they no longer have the qualities that made them exceptional in the first place, or if they’ve become a significant threat to public safety, Ritchie says. Take the banyans that line Banyan Drive in Hilo, which were planted by celebrities such as Franklin Roosevelt, Babe Ruth, and Amelia Earhart. They’re gone from the list. No one, not even Ritchie, is clear on why these trees lost their status, according to a story in the Honolulu Civil Beat. But Ritchie says they’re currently undergoing another evaluation.

Some trees are celebrities in their own right, beyond the bureaucratic designation. Take the world’s most famous monkeypod, which grows in Moanalua Gardens. It even has a nickname, the Hitachi Tree, because its image and silhouette became corporate symbols of the Japanese electronics titan. The monkeypod’s distinctive umbrella shape shades an enormous swath of the park and sees thousands of visitors a day, including many visitors from Japan, who grew up with Hitachi commercials and their signature jingle.

Some of Hawaiʻi’s exceptional trees earned their designation because they are the largest examples of their respective species in the United States, including the mammee apple, baobab, queen flower tree, cannonball tree, doum palm, nawa, narra, and Queensland kauri, according to the Exceptional Trees of Hawaiʻi site. A Mindanao gum, or Eucalytpus delgupta, growing in the Wahiawa Botanical Garden, holds the title of tallest exceptional tree, towering over 200 feet. And several banyans growing by the International Marketplace in downtown Honolulu likely vie for the title of largest overall.

Hawaiʻi’s oldest exceptional tree is a 227-year-old orange tree that grows in South Kona, planted in 1792 after British captain George Vancouver visited the islands on HMS Discovery, according to the site. The ship’s surgeon and naturalist, Archibald Menzies, distributed citrus seedlings to local chiefs, left over from the ones he kept on board to keep scurvy at bay.

Other trees earned their status due to mystical significance, such as the sacred fig, Ficus religiosa, known as the Bodhi tree. Found in Honolulu’s Foster Botanical Garden, it’s said to be a direct descendant of the tree under which Prince Siddhartha Gautama sat in the sixth century B.C. to reach enlightenment and become the world’s first Buddha, according to Honolulu Magazine. The tree arrived on the island in 1913 after Sri Lankan monk Anagarika Dharmapala befriended Mary Mikahala Foster, a theosophist and royal descendant. Another exceptional tree—in this instance, an entire sacred grove—grows at Pu’u o Hoku Ranch on the island of Molokaʻi. The circular kukui grove spans five acres and is believed to be the burial site of Kahuna Lanikaula, a renowned Hawaiian priest, according to a 1955 story in The Honolulu Advertiser.

And some are much more humble, such as the lychee tree growing in the corner of a parking lot by a strip mall on the corner of Nu’uanu Avenue and School Street. It was the first of its kind in the state, according to The Honolulu Advertiser.

Exceptional trees pepper all the islands except for lightly populated Niʻihau and unpopulated Kahoʻolawe, but Oahu leads the list in terms of sheer quantity—more than 1,000 in total. While Oahu is not inherently more arboreally exceptional than the other islands, Ritchie says, more residents there know about the program than on other islands. On the Big Island, for example, the Arborist Advisory Committee long languished in inactivity, but has just begun to re-form, Ritchie told the Honolulu Civil Beat.

Citizens also have quite an incentive to identify any exceptional trees on their own property—a $3,000 tax credit every three years, intended to subsidize proper arboreal maintenance. If you live in Hawaiʻi and know a tree you think deserves recognition, contact your County Arborist Advisory Committee and fill out an application. A committee will later decide the fate of your tree and, if you’re lucky, adorn its trunk with a small plaque that tells the world—or at least anyone who comes close enough to read it—just how special it is.

Environmentalists see small reforestation pilot sites around the capital of Amman as a first step to a greener future.
Video • Object of Intrigue