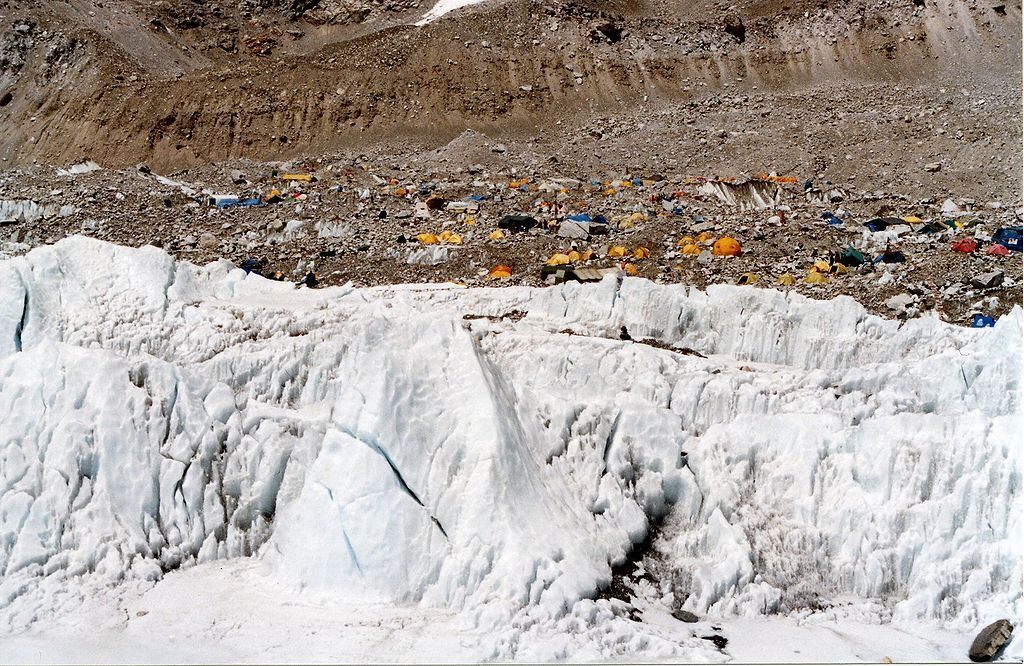 A base camp on the Nepalese side of Everest. Uwe Gille/(CC BY-SA 3.0)
In This Story
Destination Guide

Mount Everest, with a summit more than 29,000 feet above sea level, means something special to mountaineers. The mountain’s popularity has grown over the decades since it was first scaled in 1953 by Tenzing Norgay, a Nepali-Indian Sherpa, and Edmund Hillary, a New Zealander, culminating in this year’s startling queue of people waiting for their turns to reach the peak. Along the way, this mass of mountaineers—close to 1,000 a year—leave countless bits of trash on the trail or at one of the high-altitude base camps. In an attempt to address this increasingly troubling issue, Nepal recently announced that single-use plastics will be banned from Mount Everest and the surrounding region, starting in January 2020.

According to CNN.com, only plastic water bottles will be exempt. “Not leaving any trash on the mountain is imperative,” says Gordon Janow, of Alpine Ascents, which guides climbers and aspiring mountaineers all over the world. While the ban is aimed at reducing waste on Mount Everest, it’s difficult to see how it will actually be applied. Understandably, hikers have to bring lots of gear with them to the base camps—including toiletries, those exempt bottles of water, and lots and lots of other equipment that they don’t intend to use again—so it’s hard to say what plastic will be considered “single-use.” But, “The idea that there are rules to make the mountain more clean is probably the most important part,” says Janow.

Though debris is a problem on the slopes, it’s not soda cans and candy wrappers. “It’s more tarps and oxygen bottle parts and things like that,” says Janow. “Travelers are a pretty good crowd overall in terms of the environment … but [Nepal] just needs to start limiting the different types of things that go up there.” Most of the trash found on Everest is left behind because of the focus on survival—and there are times when the weight of a pack can make the difference between life and death. Local Nepalese cleaning crews often sort this trash into piles around the various base camps. In fact, earlier this year, 14 volunteers collected more than 6,000 pounds of material.

“It’s not a place for anything left up there, [the mountain] is a harsh environment where things will last for a long time,” says Janow. “A lot of the effort needs to be on the idea that if you bring it in, you’ve got to bring it out, whether its biodegradable or not.” (Unfortunately that includes the bodies of climbers who died along the way.) Similarly, in Tanzania, local officials announced a country-wide ban on single-use plastics, motivated in part by the trash being left on Mount Kilimanjaro. Says Janow, “That may be a nice model for how the future will look.”

Fort Belvedere, where he gave up the throne, has seen both historic romance and political crisis.
plasticenvironmentexplorationmountains
Keep Exploring
oceans

They're few and far between.
science

In Search of Rare Birds and Glory in Colombia

We're All Citizens of the Garbage Patch State

An Italian artist has created an imaginary homeland for all of our plastic waste.
science

In the 19th century, the romance of mountains met the desire to quantify the natural world.
Read more
Thanks for sharing!