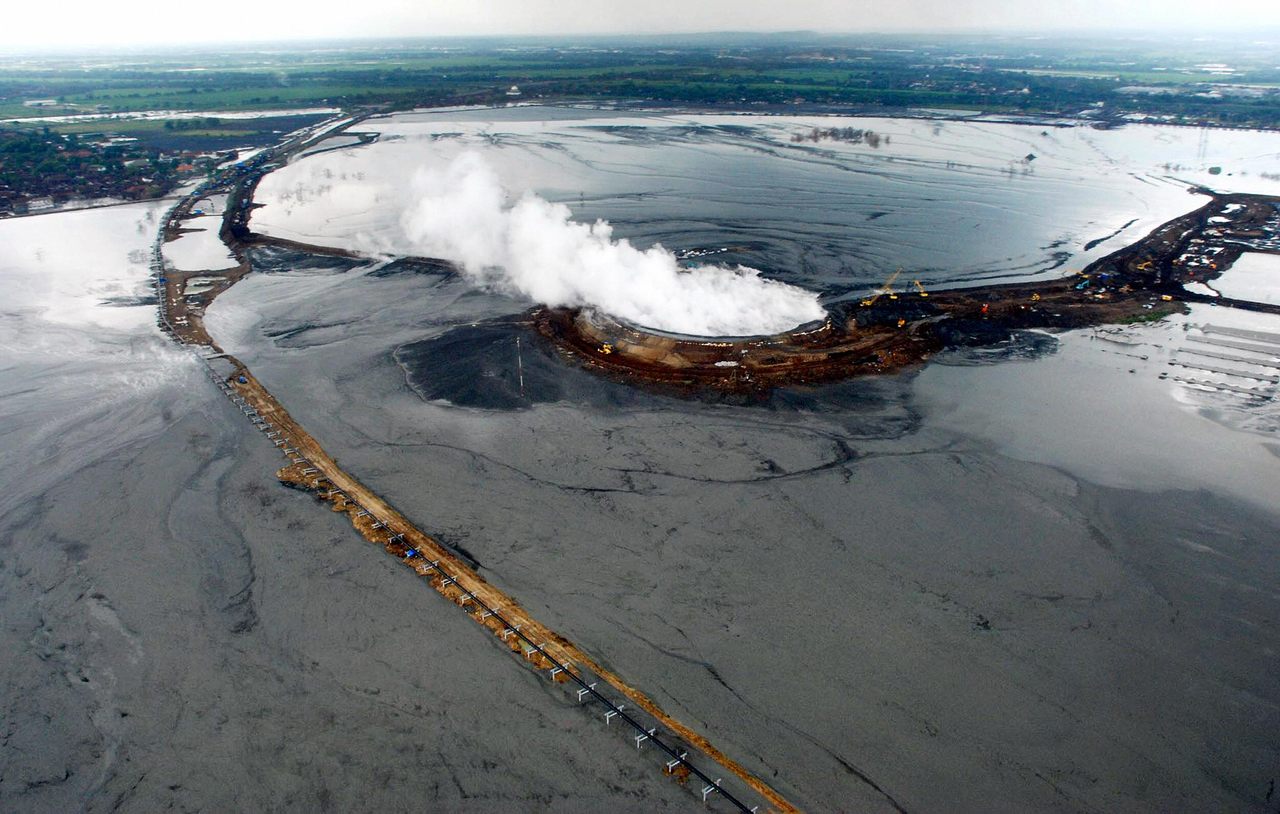 Engineers have tried to corral a mud volcano in Indonesia that has covered more than 1,700 acres with mud. Eka Dharma/AFP via Getty Images
In This Story
Place

A mud volcano in Indonesia spews out 50,000 cubic meters of mud every day.
Destination Guide

Rice farmers living in Sidoarjo Regency, Indonesia, awoke to a strange sight on May 29, 2006. The ground had ruptured overnight and was spewing out steam.

In the following weeks, water, boiling-hot mud, and natural gas were added to the mixture. When the eruption intensified, mud started to spread over the fields. Alarmed residents evacuated, hoping to wait out the eruption safely.

Except that it didn’t stop. Weeks passed, and the spreading mud engulfed entire villages. In a frantic race against time, the Indonesian government began to build levees to contain the mud and stop the spread. When the mud overtopped these levees, they built new ones behind the first set. The government eventually succeeded in stopping the mud’s advance, but not before the flows had wiped out a dozen villages and forced 60,000 people to relocate.

Why would the Earth suddenly start vomiting forth huge quantities of mud like this?

The Lusi structure—a contraction of Lumpur Sidoarjo, meaning “Sidoarjo mud”—is an example of a geological feature known as a mud volcano. They form when a combination of mud, fluids, and gases erupt at the Earth’s surface. The term “volcano” is borrowed from the much better known world of igneous volcanoes, where molten rock comes to the surface. I’ve been studying these fascinating structures on subsurface seismic data for the past five years, but nothing compares to seeing one actively erupting.

For mud volcanoes, in many cases the mud bubbles up to the surface rather quietly. But sometimes the eruptions are quite violent. Furthermore, most of the gas coming out of a mud volcano is methane, which is highly flammable. This gas can ignite, creating spectacular, fiery eruptions.

Mud volcanoes are little known in North America, but much more common in other parts of the world, including not only Indonesia but also Azerbaijan, Trinidad, Italy, and Japan.

They form when fluids and gases that have built up under pressure inside the Earth find an escape route to the surface via a network of fractures. The fluids move up these cracks, carrying mud with them, creating the mud volcano as they escape.

The idea is similar to a car tire containing compressed air. As long as the tire is intact, the air stays safely inside. Once the air has a pathway out, however, it begins to escape. Sometimes the air escapes as a slow leak; in other cases, there’s a blowout.

Overpressure within the Earth builds up when underground fluids are unable to escape from beneath the weight of overlying sediments. Some of this fluid was trapped within the sediment when it was deposited. Other fluids may migrate in from deeper sediments, while still others may be generated in place by chemical reactions in the sediments. One important type of chemical reaction generates oil and natural gas. Finally, fluids may become overpressured if they are squeezed by tectonic forces during mountain building.

Overpressures are commonly encountered during drilling for oil and gas and are typically planned for. A primary way of dealing with overpressures is to fill the wellbore with dense drilling mud, which has sufficient weight to contain the overpressures.

If the well is drilled with insufficient mud weight, any overpressured fluids can rush up the wellbore to explode out at the surface, leading to a spectacular blowout. Famous examples of blowouts include the 1901 Spindletop gusher in Texas and the more recent 2010 Deepwater Horizon disaster in the Gulf of Mexico. In those cases it was oil, not mud, that burst out of the wells.

In addition to being fascinating in their own right, mud volcanoes are also useful to scientists as windows into conditions deep inside the Earth. Mud volcanoes can involve materials from as deep as 6 miles (10 kilometers) below the Earth’s surface, so their chemistry and temperature can provide useful insights into deep-Earth processes that can’t be obtained in any other way.

For example, analysis of the mud erupting from Lusi has revealed that the water was heated by an underground magma chamber associated with the nearby Arjuno-Welirang volcanic complex. Every mud volcano reveals details about what’s happening underground, allowing scientists to build a more comprehensive 3D view of what’s going on inside the planet.

Today, more than 16 years after the eruption began, the Lusi structure in Indonesia continues to erupt, but at a much slower rate. Its mud covers a total area of roughly 2.7 square miles (7 square kilometers), more than 1,300 football fields, and is contained behind a series of levees that have been built up to a height of 100 feet (30 meters).

Almost as interesting as the efforts to stop the mud have been the legal battles aimed at assigning blame for the disaster. The initial rupture occurred about 650 feet (200 meters) from an actively drilling gas exploration well, leading to widely publicized accusations that the oil company responsible for the well was at fault. The operator of the well, Lapindo Brantas, countered that the eruption was natural, triggered by an earthquake that had occurred several days earlier.

Those who believe the gas well triggered the eruption argue that the well experienced a blowout due to insufficient mud weight, but that the blowout did not come all the way up the wellbore to the surface. Instead, the fluids came only partway up the wellbore before injecting sideways into fractures and erupting at the surface several hundred meters away. As evidence, these proponents point to measurements made in the well during drilling. Furthermore, they suggest the earthquake was too far away from the well to have had any effect.

By contrast, proponents of the earthquake trigger believe that the Lusi eruption was caused by an active hydrothermal system in the subsurface, somewhat akin to Old Faithful in Yellowstone National Park. They argue that such systems have a long history of being affected by very distant earthquakes, so the argument that Lusi was too far away from the earthquake is invalid.

Furthermore, they suggest that a pressure test in the well conducted after the eruption started showed that the wellbore was intact, not breached by fractures and leaking fluid. Consistent with this interpretation, there is no evidence that any of the drilling mud ever came out of the Lusi eruptions.

In 2009, the Indonesian supreme court dismissed a lawsuit charging the company with negligence. The same year, police dropped criminal investigations against Lapindo Brantas and several of its employees, citing a lack of evidence. Although the lawsuits have been settled, the debate continues, with international research groups lining up on both sides of the dispute.

Michael Hudec is a senior research scientist at the Bureau of Economic Geology, University of Texas at Austin.

They come in pairs more often than you might think, but generally aren’t twice as dangerous as the solo acts.
disasters