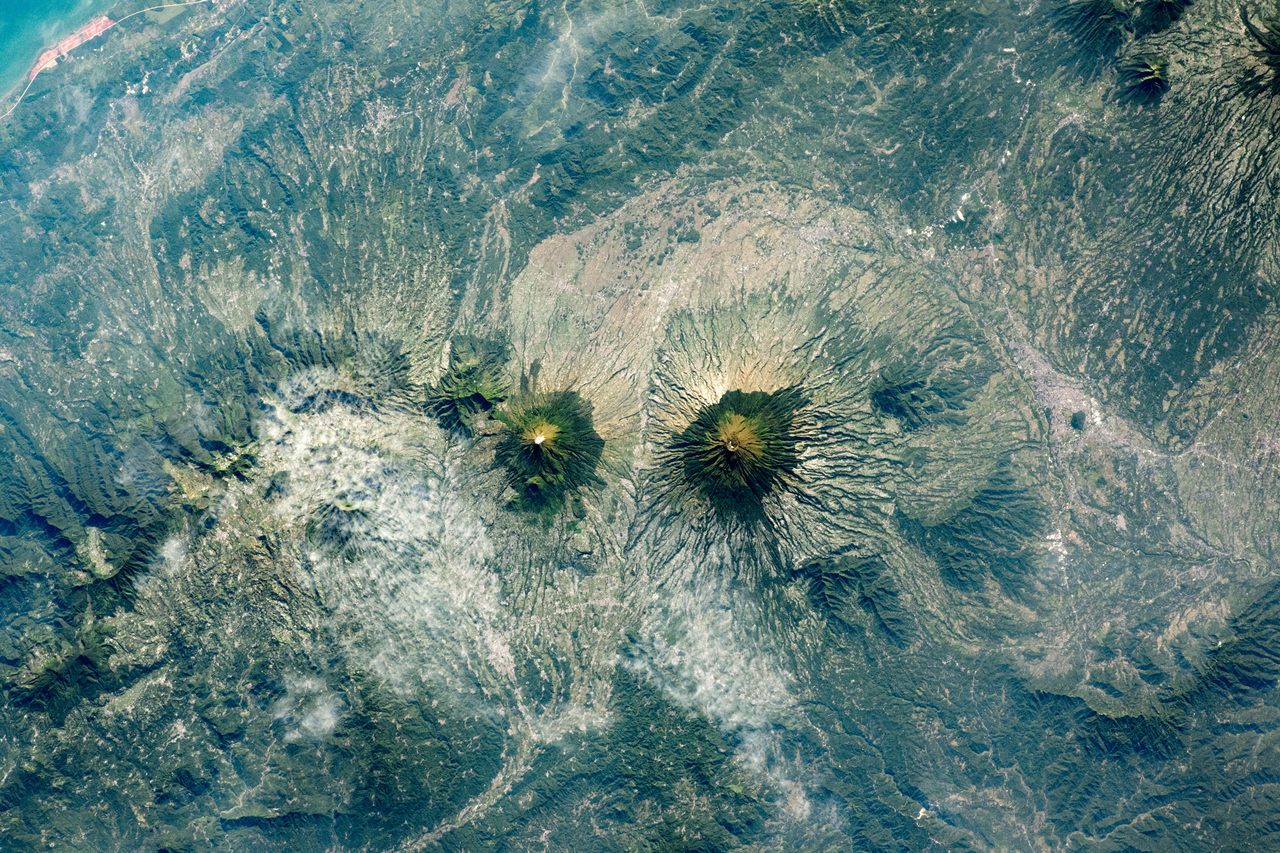 Seen from the International Space Station, twin volcanoes Sundoro (left) and Sumbing on the Indonesian island of Java. NASA/Public Domain
In This Story
Destination Guide

Rising more than 10,000 feet from lush forest and fields in the center of Java in Indonesia, two perfectly shaped stratovolcanoes stand side by side. The summits of Sundoro and Sumbing are less than 10 miles apart, surrounded by countless small farms that grow rice, sugarcane, and other crops in the fertile volcanic soil. A narrow highway between the peaks is dotted with guesthouses, cafes, and outfitters: Each year, thousands of hikers pass through on their way to tackle the trails that lead up on either side. From the ground, the two dormant cones might be mistaken for benevolent guardians that enrich local agriculture and attract tourists from across Indonesia and beyond.

Seen from more than 250 miles above Earth’s surface, however, the twins are a little more menacing. In an image taken earlier this year by an astronaut aboard the International Space Station, the volcanoes suggest the baleful stare of a skull-faced creature rising from the landscape. The photo offers a stark reminder that Sundoro (sometimes spelled Sindoro) and Sumbing were created by one of Earth’s most destructive (and creative) processes. Volcanologists and other researchers who study twin volcanoes around the world say the paired peaks are not necessarily double trouble for populations nearby—but they can present special concerns.

Franck Lavigne, a geographer at the University of Paris 1 Panthéon-Sorbonne, has studied many of Indonesia’s volcanoes, including these two. He has also studied another set of twins nearby: Merapi—one of the most active volcanoes in the world—and dormant Merbabu. Much of Lavigne’s work focuses on risk assessment and popular perceptions.

“The main problem is that when one of the twin volcanoes is very active, like Merapi, the other is considered a dead volcano by the local people,” says Lavigne. Merbabu is not actually extinct he adds, but “in (the event) of volcanic unrest at Merbabu, all the attention will (still) focus on Merapi. The risk perception of Merbabu is very low and that could be a problem in case of an evacuation order.”

Like Merbabu, Sundoro and Sumbing are classified as dormant. Sumbing has had just one eruption in historical times, in 1730; Sundoro has had a half-dozen small eruptions in the last three centuries, most recently in 1971. While the term “twin volcanoes” sometimes refers to a pair of edifices—the cone-shaped build-up of material around a central vent—that share a single magma chamber, there is no strict geological definition. The eruption patterns of the Indonesian twins suggest they are probably two separate volcanoes that just happen to be close neighbors.

According to Haraldur Sigurdsson’s Encyclopedia of Volcanoes, double cones of all kinds are fairly common, from Pomerape and Parinacota, on the Chilean-Bolivian border in the Central Andes, to Kamchatka’s Klyuchevskoy and Bezymianny in Russia. Triplet volcanoes and even higher cone-counts are possible: Siggurdsson noted that New Zealand’s Tongariro contains as many as 30 edifices, many of them nested or overlapping.

Whatever their structure and relation to each other, paired volcanoes always signify an especially restless Earth below, says Fabrizio Marra, a researcher at Italy’s National Institute of Geophysics and Volcanology. “Such ‘twin’ volcanoes testify to the occurrence of fast deformation along particularly active fault lines,” he says. Sundoro and Sumbing, for example, are just two particularly close volcanoes in a line of peaks stretching across Java. The island is home to scores like them, both dormant and active, including Semeru, which unleashed a deadly eruption earlier this month. Despite their proximity, Marra says, “This doesn’t imply that such volcanoes are more dangerous, necessarily.”

Twin volcanoes, regardless of internal structure, often take turns erupting on a smaller scale, which may actually reduce the overall hazard. “Continuous magma release may be less dangerous than a long-time accumulation underneath an isolated volcano, which may give rise to a huge explosive eruption,” Marra says.

Some twin volcanoes do erupt at the same time, though it’s unclear if one triggers the other. In 2020 in Nature, Marra and colleagues described the legacy of the twins that led to the founding of Rome—not Romulus and Remus, but Colli Albani and Monti Sabatini, two massive, now-dormant volcanoes that have exhibited what Marra calls “coupled eruptive behavior, including huge, explosive eruptions” in the past 600,000 years. Lava flows from the volcanoes created the rich soil that made the land between them attractive to early human farmers. It’s there, on rumpled volcanic outcroppings famously known as the Seven Hills of Rome, that the heart of an empire took shape.

For the citizens of Rome then and now, much like the people living close to Sundoro and Sumbing today, the quiet volcanoes might seem benign. And that, says Lavigne, is the danger. “In my opinion, the main problem is not related to the fact that they are twins,” he says. “The main issue is that they are dormant volcanoes, so they are less studied than the active ones, [and are] not considered as dangerous by the local people.”

A look back at the ingenious ways scientists advanced our understanding of the world in 2021.
forests

Decades of work has revealed a "megadiverse" ancient landscape in northern Peru that was destroyed in a volcanic eruption.
science