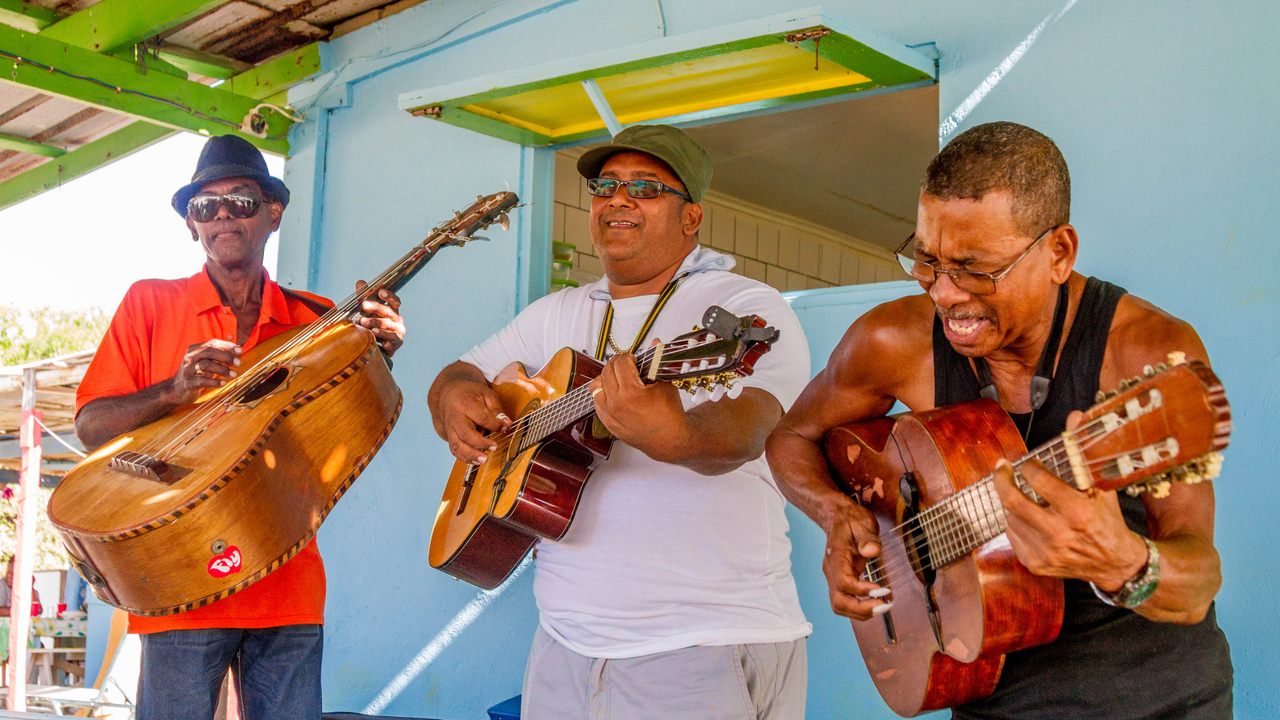 Like an athlete, Juan “Nochi” Coffie maintains a strict diet for two weeks before his big event. He shuns alcohol, goes to bed early, and starts collecting dried cactuses. He is preparing for a marathon—the 26 hours of gleeful musical mobs and soul-cleansing fire jumps that mark the festival of San Juan on the tiny, turquoise-fringed Caribbean island of Bonaire.

Every June 23 four villages on the island—Nikiboko, Nord Saliña, Antriol, and Rincon—erupt in song at 8 pm and the performances don’t end until 10 pm the next night. Roving musicians seek out islanders named Juan to serenade. The Johns, Juanas, Juanitas, and Johannas of Bonaire are also honored with a visit. Then, five days later, on the festival of San Pedro, the same tribute is paid to the Pedros, Peters, Pablos, Pauls, Paulus, Piets, Petras, Petricas, and Petronelias.

And the music doesn’t end there. Folkloric songs echo across the island during fall’s Barí celebration, Maskarada on New Year’s Day, and the Simadan sorghum harvest festival in April.

Juan Coffie receives performers at his compound every year on the festival of San Juan. While they play, Coffie sets the kindling he has collected aflame, says a prayer of thanksgiving, and starts the bonfire leaps that are another signature of the celebration. “They visit for about an hour and a half and normally want to stay longer but they have to continue with their route for the night,” he says. Coffie delights in following the musicians from spot to spot as they complete their musical tour but despite his best intentions, he has only lasted the full 26 hours once. “The best thing about the night is the vibration between the musicians, how we all take shots of rum, the jumping over the fire and how everybody is just in harmony,” he says.

This little-known custom takes place on an island few have heard of. Bonaire is located in the Caribbean 50 miles north of Venezuela. Along with St. Eustatius and Saba, it is one of three islands that make up the Caribbean Netherlands municipality. Upon discovering it in 1499, the Spanish enslaved the first inhabitants and took them to work in what is now Dominican Republic and Haiti as they deemed Bonaire “useless” because it lacked gold and other minerals. The Dutch later sailed to the island looking for salt to power their herring industry and struck white gold. With little defense from the Spanish, they took possession of it in 1636. African slaves were then brought to work on the salt flats and sorghum fields in the late 1600s. Further contributing to its diversity, the British also occupied the island for a period in the 1800s. The Bonairians of today—of which there are about 20,000— are culturally eclectic and four languages are spoken. Dutch is the official one but Papiamentu—a Creole language with roots in Portuguese, Spanish, Dutch and English—is more commonly spoken among locals.

During San Juan and San Pedro, named celebrants are first serenaded with a Papiamentu song titled “Habri Porta” which beckons them to open their doors for the performers and threatens them with death if they do not. “The song says ‘Open the door Juan or Pedro. Please open the door otherwise God will punish you and you will die today’ but these are just the song lyrics and it’s not a literal threat,” says Izaïn Jezus “Gaspar” Mercera. For over a decade, Mercera has led historical tours and provided Bonairian music lessons at Mangazina di Rei, a cultural center providing education about the island to locals and visitors in person, and to the world via online broadcasts. “Normally as soon as the person hears that song, doors, windows, everything gets opened and everybody sits together to play,” he says.

The musical serenades are only quasi-compulsory. “There is a greeting song and a farewell song as well for when they aren’t home or if they don’t open the door,” Mercera says. “The musicians keep playing the same song over and over outside and if the person doesn’t open up, they switch to another one that essentially says ‘Goodbye, so long, we will see you next year’ and then they move to the next house.” Mercera says that most named celebrants are happy to receive the musicians except those they visit very early in the morning. “When you’re in your pajamas and a few crazy clowns are standing outside your door, I think you won’t be opening it for them even if it’s tradition, right?”

Not much is known about how this annual tradition evolved into a lengthy roving concert with the Juans and Pedros playing host. What is known, however, is that the flame jumping on those dates was brought to Bonaire by the Spanish. “This is a Spanish tradition related to the Catholic saints and the meaning behind the fire jumping is to purify your soul,” Izaïn explains.

Upon closer inspection, Bonaire’s San Juan is reminiscent of La Noche de San Juan which is celebrated with ardent fervor on Spain’s beaches and streets on the same night. Spain’s fire-focused summer celebrations are driven by various superstitions. Some people write down things they wish to eradicate from their lives in the coming months and then torch their notes in the fire to symbolize new beginnings. Others jump over bonfires at least three times to purify and protect themselves from evil spirits that are believed to lurk around during the longer summer nights.

In Bonaire, San Juan is said to be a holiday for sorghum farmers who jump over flames to summon rain for the next planting season. San Pedro purportedly is for fishermen who perform a fire-jumping act to ask God to tame the extraordinary winds that are typical during that time of the year so that they can safely go fishing for wahoo, mahi and masbangos (big eye mackerels).

Wind, rain, or shine, musicians like Gonsalvo “Kora” Goeloe happily assemble their goat skin-topped “barí” drums, “wiri” metal scrapers, and other local instruments for the lengthy moving concerts. (Goeloe also goes by the name “Juni.” Due to the familiarity and intimacy of the community in Rincon, many people have sobriquets and artistic names that take precedence over their given ones.) Now in his 50s, Goeloe first played at the festival when he was 13 years old and today his group, Sonora Rinconero, is one of three that performs in Rincon. “There are certain people whose houses we visit every single year,” he says, but the festivities aren’t limited to a few well-named individuals. “Sometimes we visit your house because we know you are called Johanna or Piet, but normally we go to people that ask us to come and play.” Transfixed by the energy that pulsates through this singing ritual, bars and restaurants have started requesting the bands, too.

At many of their stops, the musicians are compensated in kind for songs. “Usually if people know you’re going to play for them, they prepare something for you to eat and drink like salt fish, goat stew, chicken soup, soft drinks, beer, and rum,” Goeloe says. “We only drink a little bit of alcohol during those 26 hours because you want to be able to keep going.” The day before each event, he eats goat soup, iguana soup, and lots of bread or sorghum pancakes to prepare for his big test of endurance. Goeloe has played for the full 26 hours many times, but some musicians treat it as a relay race: “Sometimes a few will sleep for a while, wake up, and then come back to enjoy themselves.”

When he Is not performing at a festival, Goeloe is an educator at the Mangazina di Rei cultural center, where he works to ensure these celebrations carry on for generations. “Every Saturday from 3 to 5 pm we show children how to make and play the instruments and tell them everything about our culture so that we can keep it alive,” he says.

Their efforts seem to be working. Helen Mercera-Thode is a Rincon resident whose love affair with the festival began when she was just a child; her paternal grandfather, Juan, regularly received visits on June 23. She now sings with Sonora Rinconero, and her husband Meleno “Pachi Pe” Mercera blows the conch. These days, her son, Jeadan, plays along, too. “We love this event and it’s our passion and I think it is something that everybody looks forward to every year,” she says. “There is lots of joy from the elderly and also young people, men, women and teenagers—especially the teenagers.”

Once a colonial tradition, a creative festival has been elevated to new heights.
music

Or maybe it was the cigars that gave us this New Year's Eve staple.
music

Heaven and hell, music and dance at the Carnaval de Oruro.
vikings

The historian behind an online database of eccentric traditions has already visited more than 550 events.
Video • Gastro Obscura