Finding a Muse in the Supernatural - Atlas Obscura 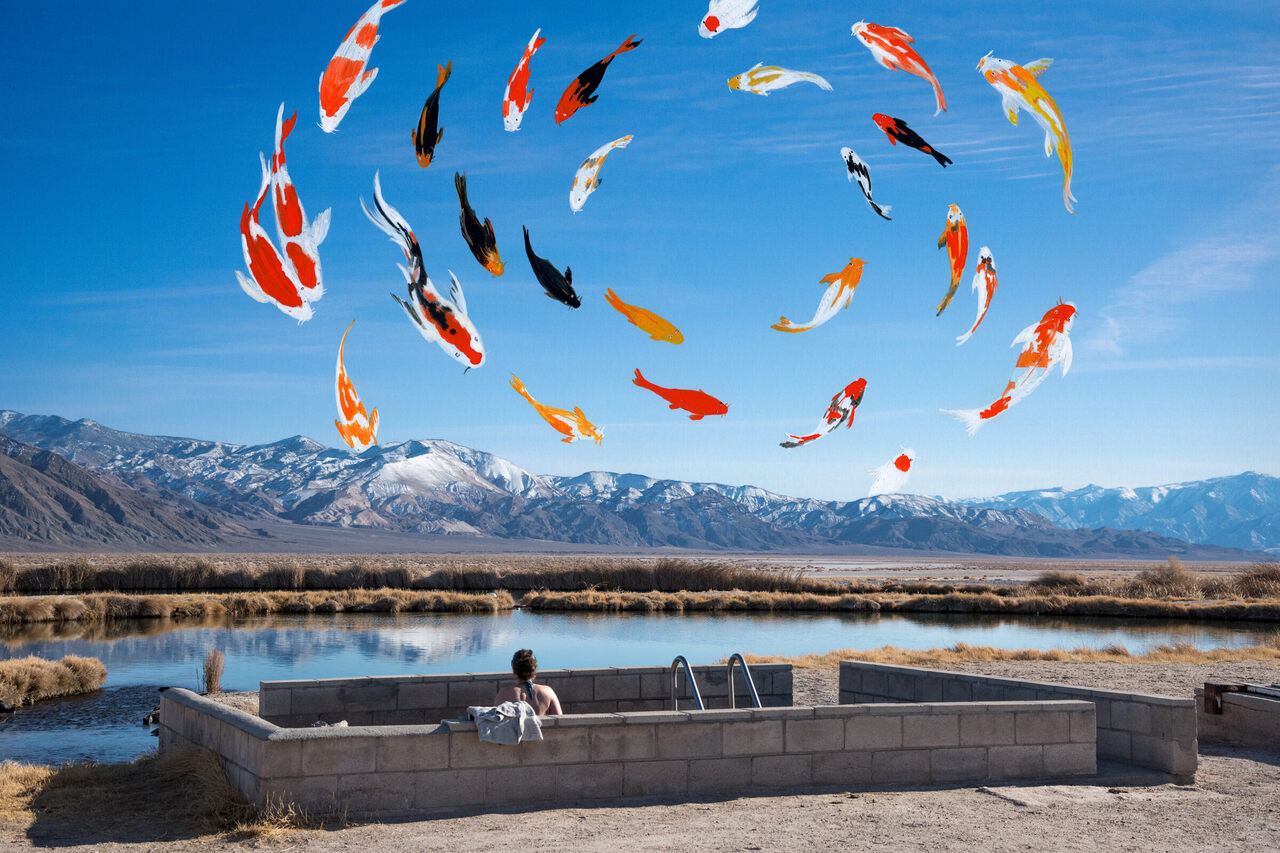 You’d be hard-pressed to find a community in Nevada that doesn’t possess a local legend or two. This is especially true of the state’s many ghost towns, nearly all of which are said to be haunted by former residents. With Goldfield, Tonopah, and Fish Lake Valley on the itinerary for days three and four of their journey from Las Vegas to Reno on “The Fellowship of Highway 95”—a week-long artistic collaboration on Nevada’s “Free-Range Art Highway”, organized by Atlas Obscura and TravelNevada—the collage artist Francesca Berrini and the photographer Lindsey Rickert were heading deep into “ghost country,” as Berrini described it in the day’s travel journal.

En route to Goldfield, the first stop was the International Car Forest of the Last Church. Covered in a thin blanket of snow, the sight was both serene and spooky. Rickert snapped an off-kilter photograph and collected a handful of snow from the ground. Later processing the film with this water, she produced an image that captures the eerie essence of the place. How many times have ghost-hunters presented photographs with similar imperfections as photographic “proof” of a ghostly presence?

“I’ve always thought believing in ghosts is something I’d like to take up, like wearing lots of crystal jewelry or keeping a dream journal to predict the future, but somehow my inner skeptic always undermines my excitement of unexplained phenomena,” Berrini wrote.

Goldfield’s unique history provides plenty of fodder for stories. Wyatt and Virgil Earp lived here for a year in the early 1900s, until the latter brother died of pneumonia. In 1907, the town’s mine owners convinced President Theodore Roosevelt to send in 300 federal troops to help manage a bitter labor dispute. And in 1923, the explosion of a moonshine distillery destroyed most of the town’s wooden structures.

For Berrini and Rickert, a pleasant chat with the owner of a local antique shop soon slid into sordid tales from the town’s past. “Yet the conversation was never melancholy,” Berrini noted. “The town and the folks we talked with were all optimistic about the possibilities of sharing the past with future visitors.”

After stopping by the cemetery in Tonopah just before nightfall, the two artists settled in at the Mizpah Hotel. Built in 1905 and shuttered in 1999, the Mizpah represents the oldest permanent structure ever built here. The hotel was finally restored to its literal purple glory in 2011. Solarized glass bathes the dark interior in lavender light. Elegantly carved velvet furniture transports visitors back in time.

It’s said that not even the renovations could exorcise “The Lady in Red.” The alleged ghost of a prostitute murdered by a jealous lover, the Lady in Red is purported to haunt the hotel’s fifth floor. Though she’s been known to coo “Hey You…” into men’s ears in the elevator, she’s harmless. The Mizpah has embraced its wandering soul and proudly advertises room 502 as its “Lady in Red” suite.

Berrini and Rickert pay homage to the lady in their collage titled Protection From the Unknown, which depicts her as an angelic benefactor. The illustrations were found in a book purchased just down the street from the hotel in downtown Tonopah, and the frame resembles the decor of the hotel. The letters were clipped from a local newspaper.

After a luxurious evening at the Mizpah, the duo woke up refreshed and ready for an adventure out to Fish Lake Valley Hot Springs, a large open-air bath fed by a thermal spring and surrounded by mountainous scenery. But fate had a more banal adventure in store for them.

“Day four brought a lesson I have learned time and time again: it’s never a good road trip without some sort of car problem,” Rickert wrote in the day’s travel journal. Their car keys’ fob had stopped working, meaning they couldn’t lock their equipment-filled van.

Determined, the women headed to the hot springs anyway, getting lost on a dirt road along the way. A friendly local flagged them down and pointed them in the right direction.

By the time they arrived, the warm water and tranquil ambience was a welcome relief.

To top it off, having spent the previous day keeping their eyes and ears peeled for ghosts, they experienced something if not supernatural, at least hard to explain at Fish Lake Valley. The living organisms they encountered in the area were stranger than anything they’d seen the previous day.

Amid flocks of predatory birds, the women saw unusually large, brightly-colored fish swimming in the ponds near the bath. Colorful fish are difficult to raise even in suburban environments because their appearance make them vulnerable prey. How they could survive in a hot spot for migratory birds is a mystery.

Rickert snapped a photograph of her friend basking in the placid waters, and Berrini embellished it with hand-drawn fish in their photo collage titled Oasis (displayed at the top of this article) to portray the serene, surreal experience.

Read about the final days of Berrini and Rickert’s journey along Highway 95 here.

On the final days of "The Fellowship of Highway 95," Lindsey Rickert and Francesca Berrini process what they experienced in Nevada.
Sponsored by TravelNevada
fellowshiphighway95seriesfellowshiphighway95travelnevada

Atlas Obscura and TravelNevada are offering $10,000 for pair of artists to embark on a traveling fellowship along Nevada’s Highway 95.
Sponsored by TravelNevada
Video • PinDrop

On day two of "The Fellowship of Highway 95," Lindsey Rickert and Francesca Berrini hit their stride as collaborators.
Sponsored by TravelNevada
Thanks for sharing!