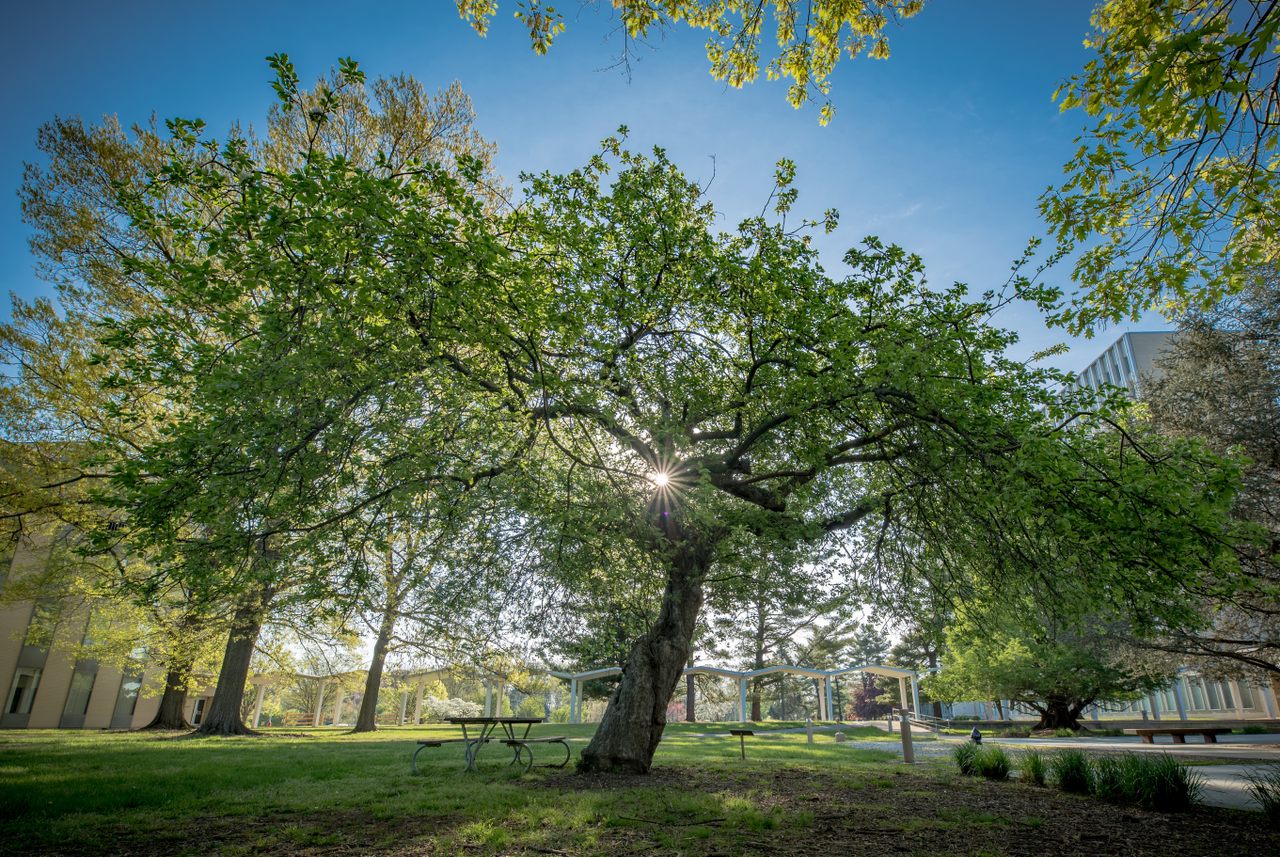 At the National Institute of Standards and Technology in Maryland, their Newton tree has grown since 1966. Jason Stoughton/NIST
In This Story
Place

A clone of a cloned tree that was so important it allegedly had its own guards.
Place

At Woolsthorpe Manor in Lincolnshire, England, the ancestral home of Sir Isaac Newton, sketches drawn by the revolutionary physicist, mathematician, and astronomer still adorn the house’s walls. Outside, a gnarled apple tree has been growing for centuries.

A genetically identical tree is growing at Newton’s alma mater, Trinity College, Cambridge. Several more grow at Parkes Observatory in Australia, and another at the Massachusetts Institute of Technology. Descendants and clones of the Woolsthorpe Manor tree dot college campuses and research centers on every continent, except Antarctica. I myself took long college naps under one such tree at Occidental College in Los Angeles. “Newton’s Apple Tree,” the plaque read, like many others across the globe. “Grown From An Apple From The Estate of Sir Isaac Newton, Lincolnshire, England.”

Newton’s apple tree holds a special place in the annals of science. In 1665, the just-graduated Newton fled to his family home to avoid a plague outbreak. After observing an apple fall from the then-young tree, Newton considered what force could pull objects in a straight line towards the earth. It was the first step towards his theory of gravity, which he would publish in 1687.

The story is widely believed to be false, like the myth of a child George Washington chopping down a cherry tree with a little axe. But Newton himself said his theory arose from seeing a falling apple while he stayed at Woolsthorpe. In physicist R.G. Keesing’s exhaustive history of Newton’s apple tree, he records sources (from the writer Voltaire to Newton’s niece) relating the tale of the apple tree. Newton may have embellished his story. But due to multiple sources of the tale, Keesing writes, there’s little doubt that there’s a seed of truth to it.

The tree has led a long, interesting life. Likely planted around 1650, it partially collapsed after a storm in 1816. While it re-rooted itself, Newton’s fame and that of his apple tree were increasingly mythologized. Part of the fallen tree was made into a chair, and chunks of the wood were taken as souvenirs. Living wood was also taken and propagated elsewhere. One shoot was taken to nearby Belton Park in 1820. The Fruit Research Station in East Malling took part of that tree in the 1930s. From there, the tree spread across the world, as universities, observatories, particle accelerators, botanical gardens, and research centers clamored for a Newton tree of their own.

These institutions receive a piece of history—not delicious fruit. Whether the trees are clones made by grafting or descendants grown from seeds, they are Flower of Kent trees, a variety that is rare today. Their fruit is green-red and big, but the texture is mealy and the flavor undistinguished. Mostly, it was used for cooking.

Getting a Newton tree can be hard. East Malling still is the main source, but getting trees over borders can be difficult. Fears about invasive pests and plant diseases can hold up plant deliveries for inspections or even quarantine. Worse, Newton trees are sometimes proven to be inauthentic. In 2016, the National Research Council in Canada discovered that their prized Newton trees were neither original nor Flower of Kent. Uncovering the truth felt like “killing Bambi’s mother,” joked the NRC’s secretary-general Dick Bourgeois-Doyle. York University in Toronto quickly offered the council offspring of their Newton trees, which are growing there today.

The greatest apple-tree sagas, though, come from people trying to grow a tree far from Newton’s temperate, shady garden. One hopeful grower was the Inter-University Centre for Astronomy and Astrophysics in Pune, India. Statues of famous thinkers—Albert Einstein, Galileo, and Aryabhata, a 6th-century Indian mathematician and astronomer—decorate an inner courtyard of the campus. A statue of Newton is there too, beneath a banyan tree. According to IUCAA director Somak Raychaudhury, the visual incongruence of Newton beneath a banyan rather than an apple tree spurred a past director to act.

Starting in 1994, then-director Jayant V. Narlikar received Woolsthorpe tree descendants at the Centre. But a combination of long post office delays and the Pune heat meant successive trees withered over and over. Finally, in 1997, they rooted two apple trees in the courtyard. Raychaudhury remembers the enthusiasm. “Everybody thought that it would be a wonderful thing” to grow the trees, he says, especially since so much astronomy is rooted in Newton’s thinking. Like the tale of Adam and Eve, he says, “the origin of physics also has an apple.”

The trees lived like kings for a while. Raychaudhury’s wife Aleika McAllister, who is from Vermont (“she grew up with apple trees”) volunteered to maintain them, and the Centre built canopies to shade them from the sun. One tree even bore fruit, which the academics sliced up and shared. Raychaudhury found the moment meaningful and symbolic, even though he thinks the apple story is “probably apocryphal.”

IUCAA’s Newton trees lived for a decade. But then they withered again. Raychaudhury believes Pune’s increasing heat, due to the city’s booming population and pollution, was the culprit. “Today, it was 105 degrees,” he says. “Twenty years ago, when this was being done, it wasn’t this hot.”

Yet Raychaudhury wants to grow the apple trees again. The IUCAA is currently experimenting with making Flower of Kent hardier, one idea being to graft a Newton tree shoot onto Indian apple trees. It’s almost a trend: Institutions that have lost their Newton trees, whether due to drought or disease, usually plant new ones in even greater numbers. Some universities and research centers now have tiny groves of Newton trees. Raychaudhury thinks that with the increased heat, that might not be possible in Pune. Yet, due to the tree’s symbolic meaning, they’re going to try. Countless others who work in fields touched by Newton—and live in places far from England—feel the same. Mathematics and physics are often seen as dry. But the worldwide love of Newton’s apple tree is almost romantic.

It’s ironic that a fruit tree is so influential to Newton’s legacy, since one reason why Newton received a higher education was that his mother thought he would be hopeless as a farmer. Instead, he pioneered optics and calculus. He set down the three laws of motion, essential for calculating the movement of earth and of the planets. He invented the reflecting telescope, and his work paved the way for astronomers today. Perhaps it’s fitting that seeds from Newton’s tree even visited the International Space Station in 2016, making it one of history’s most well-traveled trees.

Atlas Obscura has built a map of Newton trees around the world. Is there one near you?

A global map of science's most important tree.
genetics