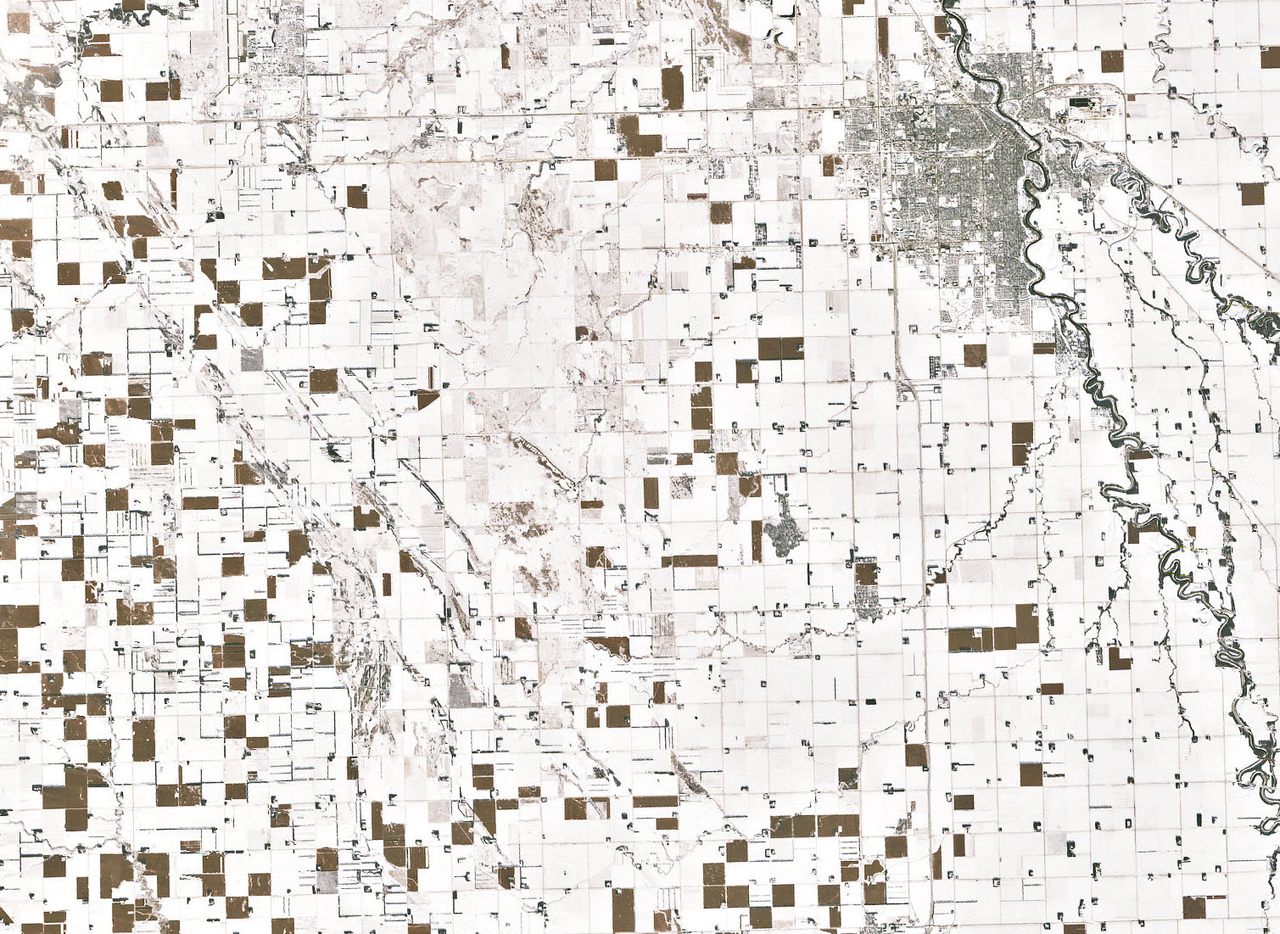 The patchwork shows expanses of snow, interspersed with fields of corn that are toughing out the winter weather. NASA Earth Observatory
In This Story
Destination Guide

Recently, a heavy snow carpeted the fields that stipple eastern North Dakota. Afterwards, satellite images captured wispy clouds and shadows above swaths of white. Images of agricultural communities near the squiggly Goose River, such as Hillsboro and Mayville, also revealed something else: a slew of little brown squares among the white ones, which made the landscape look like a patchwork of pixels. The flecks of brown turn out to be vast expanses of corn that never made it out of the field, and that will now spend the winter under a blanket of snow.

Despite the tidy beauty of the image, which was taken on the Landsat 7 satellite and published by the NASA Earth Observatory, this was a frustrating year for North Dakota’s corn farmers. Over the past five years, the state’s farmers have harvested an average of 85 percent of their corn by the middle of November, says Chris Hawthorn, a statistician in the crops branch of the National Agricultural Statistics Service. But this year, 57 percent of North Dakota’s corn was still in the fields in early-December, according to a Department of Agriculture report. That’s 1.88 million acres of corn lingering in limbo, according to the agriculture news site AgWeb.

Generally, by this time of year, satellite images of the open prairie would reveal either bare soil or “a sea of white,” says Daryl Ritchison, director of the North Dakota Agricultural Weather Network, a project run out of the School of Natural Resource Sciences at North Dakota State University. Now, because the corn is still standing in rows, stalk to stalk, the plants squeeze out the view of the snow from the air, writes Kathryn Hansen, a science communicator at the Earth Observatory. NASA’s photographs were taken from roughly 438 miles above the Earth’s surface.

Local farmers faced a double whammy of misfortune in 2019. “Corn was planted late due to a cold spring, so the crop started off behind,” says Joel Ransom, an extension agronomist at North Dakota State University. Then, a cold October and wet November slowed the drying process. Farmers usually harvest field corn when it has lost roughly half its moisture, and it’s typically turned into animal feed, ethanol, or corn syrup. “To do anything with the corn, it has to be dry,” says Ritchison—otherwise, “it’s just a bunch of mush,” and may get moldy. Farmers can nudge the drying process along themselves, with propane and other tools, but it’s costly. Ideally, Ransom says, “we depend on nature.”

Still, corn generally fares pretty well under its chilly comforter. The crop soars several feet above the surface of the soil, so it can hold up okay if heavy snow and biting winds don’t splinter the stalks. Then again, roaming animals might chow down. Some kernels will split, Hawthorn says, and others might mildew.

Assuming that the winter doesn’t loosen its grip, farmers will simply have to wait. “There’s nothing farmers can do except leave the corn in the field,” Hawthorn adds. In the meantime, we can enjoy this high-tech view from high above.

When a winter storm wallops a region, an army of volunteers springs into action—but exact totals can be tricky.
science

It's a beautiful, if imperfect, antidote to crop-damaging cold.
Video • PinDrop