North Korean Officials Had No Idea What Their Hostages Were Signaling in This Photo - Atlas Obscura
Want to see fewer ads? Become a Member. 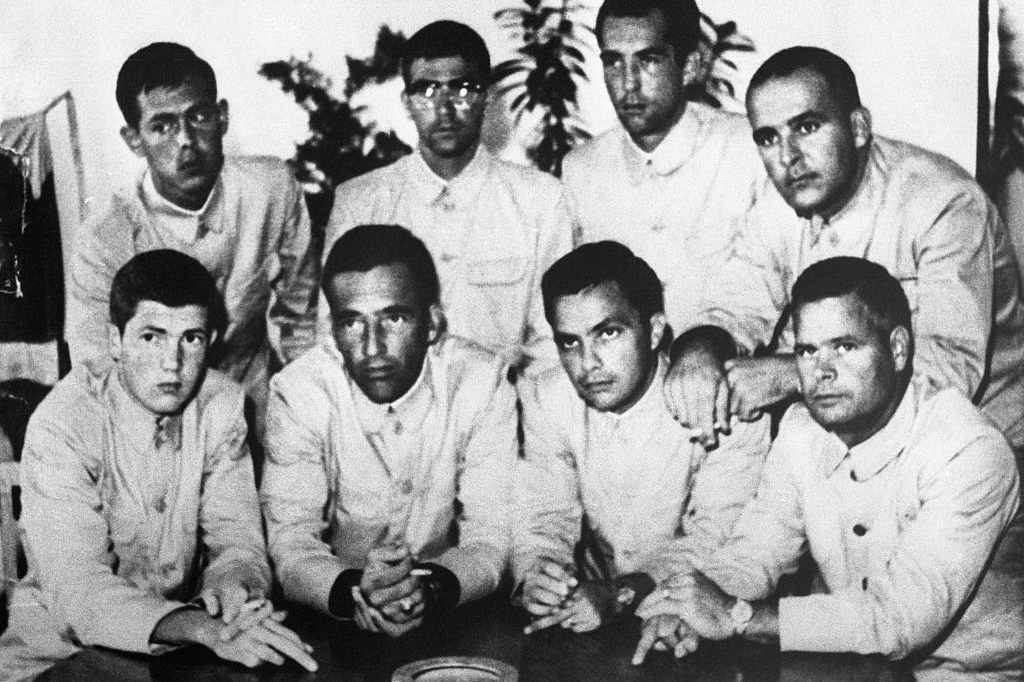 The captured crew of the U.S.S. Pueblo. Bettmann/Getty Images

The men in the photos look a little bored and awkward, maybe uncomfortable or even tense. The more you know about the photos, the more you read into them. But without context, what you see is young men assembled in rows for a formal group photo, staring into the camera or glumly off to the side. It could be a group photo of colleagues or a social club—a hum-drum setup. But stare longer and it’s obvious: In each photo, one or more of them is giving the finger.

All of these men are prisoners, pawns during a politically tense time, and they’re defying their captors in one of the only ways available to them: By flipping the bird.

It was 1968 and the United States was solidly mired in the Cold War, spying on the Soviet Union and its allies and being spied upon in return. The U.S.S. Pueblo was a Navy intelligence ship whose cover was collecting oceanographic data (of the 83 crewmen there were two civilian oceanographers aboard), but its actual duty was collecting intelligence on Russia and North Korea.

On January 23, 1968—just 18 days into its first mission—the Pueblo was approached by a North Korean vessel near the port of Wonsan. The vessel asked them their nationality, and the Pueblo hoisted the American flag. They were told to slow and prepare to be boarded; the Pueblo crew responded that they were 15.8 miles from land, and thus in international waters. But the situation quickly grew dire—three more North Korean boats appeared, and fighter jets flew overhead.

The North Korean ship opened fire on the Pueblo, killing one of the crew and wounding others. The Pueblo was barely armed; rather than fight back they began to frantically burn and dump documents, smashing equipment with axes and hammers. The ship was boarded and the crew taken captive. Bedsheets were cut up into blindfolds; they were tied up, punched, kicked, and prodded with bayonets.

“My mother’s prediction that I would die in dirty sheets was about to come true,” wrote one crew member, Stu Russell. “And to make it worse, I had my boots on.”

Soon they were being sped toward North Korea. It was the beginning of what would be a 335-day ordeal. (The crew has written extensively about their experiences, much of it collected on a website maintained by the U.S.S. Pueblo Veterans Association.)

The crew dubbed their first quarters “The Barn.” There they were housed in dim, cold cells, and beaten and tortured routinely by their captors. The men grew malnourished as they ate scant meals of turnips and a foul-smelling fish they derisively called “Sewer Trout.” One man’s shrapnel wounds were treated sans anesthetic; his tonsils would also be removed without pain relief.

Russell recalled a day when he and a few other men were transported to a shed out in the woods where they were told they would take a bath. Thoughts of World War II gas chambers fresh in his mind, Russell tried to come to terms with his impending death. “I had my ticket out of Korea, I was going home,” he wrote, “I could smell the pines and actually taste the cold night air, being alive was great.” Fortunately, the men had actually been taken to a rustic bathhouse.

As the crew suffered, cut off from outside contact, the public panicked. Washington demanded the return of the ship and its crew, North Korea rebuffed such requests, insisting the boat had been in North Korean waters. U.S. officials entreated President Lyndon B. Johnson to deploy the military, if necessary, to retrieve the men. In a television appearance days after the capture, Johnson demurred that “We shall continue to use every means available to find a prompt and a peaceful solution to the problem.” (Behind the scenes, the U.S. government was considering everything from a naval blockade to a nuclear attack.)

The public bristled, they felt the men had been abandoned. The New York Times declared the incident “humiliating” and the The San Diego Union began publishing a daily counter that ticked upward with every day the crew remained in captivity. A group of citizens calling themselves the  Remember the Pueblo Committee gave speeches, churned out bumper stickers, and tried to keep the media interested in the captives.

Meanwhile, North Korean officials were launching a media campaign of their own. They filmed and photographed the men for propaganda—even putting them through the bizarre experience of re-enacting their own capture for North Korean cameras, to be distributed as propaganda. They were forced to participate in staged press conferences, where they performed exercise routines before an audience. They were made to sign false confessions and write letters to family declaring their support for North Korea.

Occasionally, the men were the audience. One day in June, the group was assembled to watch propaganda films. One was about the North Korean soccer team’s visit to London, another about the body of a U.S. soldier being returned to officials. In both films, something extraordinary happened: Someone flipped the cameraman off. In both instances, it seemed clear that the gesture didn’t translate; their captors didn’t realize that they were being insulted, and so the action was not edited out of the reels.

So began The Digit Affair.

“The finger became an integral part of our anti-propaganda campaign,” wrote Russell. “Any time a camera appeared, so did the fingers.”

You see it in a shot of three bored looking men, two of them casually propping their heads up by clearly extended middle fingers. In a group shot of the men seated in two rows, as if for a school photo, a man in the front looks directly into the camera, his hands folded in his lap, and his top middle finger popped out. In another, a fellow looks like he’s chewing his fingernail—on his middle finger.

If their captors ever noticed the gesture, they had a story prepared: It was a “Hawaiian Good Luck sign,” a cousin of the “Hang Loose” sign, comprised of thumb and pinky extended.

This wasn’t the only way the crew defied their captors. In fact it was just one of several methods they had for coping with their plight through jokes. The finger was part of a larger campaign that included embedding in-jokes in forced confessions and letters home, giving their captors mocking nicknames, and even a bawdy poem.

“It could be considered pretty sick humor,” said crewmember Bob Chicca in a Westword story detailing the way the Pueblo men launched a laughter offense. “It helped us survive and kept morale up. For that little period of time, we were in charge of our own lives.”

The triumphant reign of the Hawaiian Good Luck sign came to an abrupt end when Time magazine published a photo of the men and pointed out their ruse, writing in the caption that “three of the crewmen have managed to use the medium for a message, furtively getting off the U.S. hand signal of obscene derisiveness and contempt.”

When the crew’s captors read this, they kicked off what the men would come to call “Hell Week,” beating the crewmen mercilessly for days. During this especially bleak period, the men had no way to know they were actually close to going home.

On December 23, 1968, U.S. officials finally agreed to sign a “confession” declaring that the Pueblo had trespassed in North Korean waters, although they did so only after formally stating that they didn’t believe in the statement they were signing. Satisfied, North Korea released the prisoners, who arrived back in the states on Christmas Eve.

The crew’s relief from their ordeal was brief. A weeks-long Naval inquiry was held to investigate charges that the men had surrendered without a fight and failed to destroy classified documents aboard the Pueblo. Crewmen wept during the inquiry as they testified about the abuses suffered while held captive. Finally, the navy dismissed the case. Crew members were eventually awarded medals, including 10 men who received the Purple Heart.

One thing that did not return with the crew was the U.S.S. Pueblo. It still resides in North Korea, where it’s a tourist attraction at the Victorious War Museum in Pyongyang.

The quest for a bird that continues to defy international sanctions.
politics

A new project is collecting recordings of public activism going back to 1991.
weapons

The True History of the Umbrella Gun, a Surprisingly Serious Weapon

Once used to assassinate a Bulgarian dissident, the disguised firearm eventually became a trope of spy films.
Video • Object of Intrigue