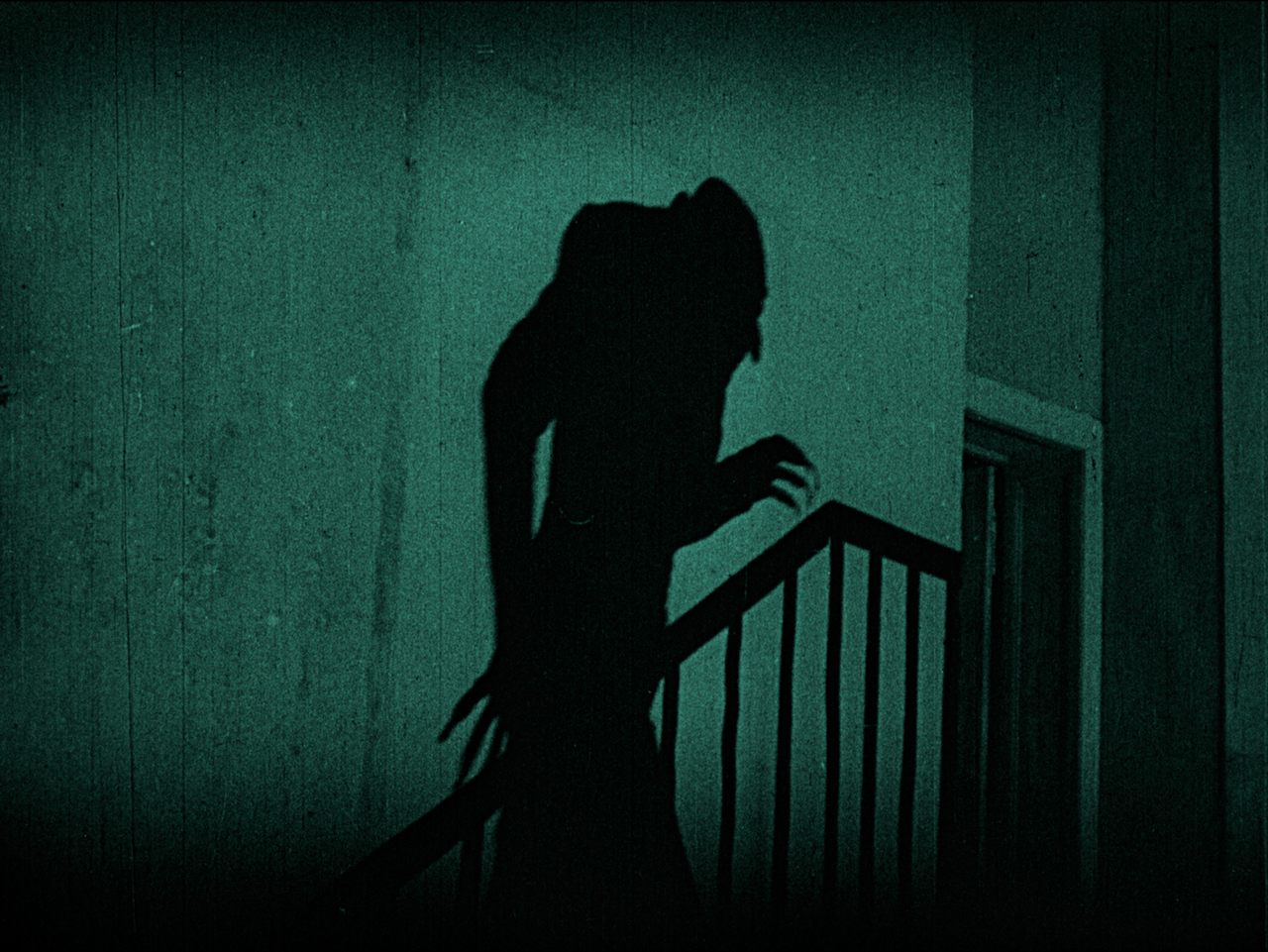 The shadow of Count Orlok is long. Deutsche Kinemathek
In This Story
Destination Guide

There’s a moment in F.W. Murnau’s silent film Nosferatu: A Symphony of Horror in which Thomas Hutter, the story’s unwitting protagonist, enters a world of nightmares. When he crosses the river to where the thinly disguised vampire Count Orlok resides, the intertitle reads “Als er sich auf der anderen Seite der Brücke befand, kamen die Geister, um ihn zu treffen.” (“As he reached the other side of the bridge, the spirits came to meet him.”)

It is a literal and spiritual crossing, one that came to be regarded by film theorists as one of the most significant moments in cinematic history. “It’s a very symbolic sentence in terms of what film means to us,” says Frank Schmidt, co-curator of Phantome der Nacht. 100 Jahre Nosferatu (Phantoms of the Night: 100 Years of Nosferatu), a new exhibition in Berlin on the legacy and cultural shadow of the iconic silent film. According to Schmidt, Hutter’s journey into the realm of the fantastic echoes the way an audience enters the immersive dream-world of a movie theater.

In the century since its release, Nosferatu has become one of the most influential films ever made—but it’s a wonder that anyone remembers it at all. When it debuted in Berlin in 1922, Murnau’s horror masterpiece was a commercial flop. The film’s creators did everything they could to drum up buzz, including a year-long advertising campaign and an extravagant costumed opening gala at the Berlin Zoological Garden’s Marble Hall. But larger German cinemas refused to screen it and Prana Film, the studio behind it, declared bankruptcy shortly after its release.

To make matters worse, in 1924, Bram Stoker’s widow, Florence, dragged the film’s makers to court for copyright infringement. It’s easy to understand her frustration; Stoker’s death in 1912 left her with a pile of debt and little money to show for supporting the literary genius who created Dracula. Murnau never bothered to ask her for permission to adapt the novel, let alone offer royalties. Supposedly, she learned of the film’s existence via an anonymous letter containing the program from the German premiere. After a brutal legal battle, the judge ordered Prana to burn all copies of the film.

That physical copies of Nosferatu survived in exile in the United States is eerily poignant, given that Henrik Galeen, the film’s Jewish writer, and part of the cast were forced to flee Germany with the rise of the Third Reich just a few years later. Though the film is a gothic horror fantasy, its history reflects the very real, precarious climate in Berlin at the time it was made and the years that followed. For all its political upheaval, the Weimar Republic in the 1920s was a period of ambitious art, film, philosophy, and literature that challenged social norms and conventions—a stark contrast to the jingoistic, state-sanctioned works produced under Nazi regime in the 1930s and 40s.

In addition to more than 100 original movie posters, sketches, and other artifacts from the film, the exhibition, on view at the Sammlung Scharf-Gerstenberg in Berlin from December 16, 2022, to April 23, 2023, attempts to draw parallels between the art and historical events of the period. By juxtaposing images from the film with etchings and paintings by Francisco de Goya, Alfred Kubin, and Franz Sedlacek, viewers can see its inspirations firsthand. Most curiously, the exhibition brings the legend of the vampire to life in a rather literal way; once a month, visitors to the museum will be able to give blood—to the German Red Cross.

Atlas Obscura spoke with Schmidt, who curated the exhibit along with Kyllikki Zacharias and Jürgen Müller, about presenting one of the most famous vampire films of all time, criticism of the film as antisemitic, and why the film still looks modern today.

Why was a vampire movie produced in Germany in 1922?

Do you think that’s why the film looks so modern, even today?

The look of the film for us today is very modern, [in part] because they filmed much of it outside. At the time, it was an economic decision because they had no money to build all these sets like in Hollywood. But for us today, it feels very modern to see all the old streets of Lübeck [in Germany]. They also filmed in the High Tatras [in Slovakia].

Why do you think the film resonated so strongly with viewers outside of Germany, particularly artists?

Even though [the film] did not have a strong reception in Germany, French Surrealist artists like André Breton saw it. They loved the film very much. The film was shown in France 1923 and also 1928, and there are many mentions of the film by the Surrealist artists of this time. Because the film had such a dream-like structure, much like their art, it had something they could connect to.

What do you think we can learn from the film today?

It shows us something about how the German film industry was in this time and what they tried to do. It also tells us about Berlin [during the Weimar Republic], that they made such a movie. For its time, it was very modern and very international. For me, it is very interesting to see how strong the connections were between art and film and literature in this period, and how they tried to translate this to the big screen.

Many of the people who worked in the film industry had to leave the country in the 1930s. Henrik Galeen, who was the screenwriter for Nosferatu, had to leave for the United States. He had a bakery in New York for some years. He couldn’t work as a screenwriter. He died there.

That brings up another issue. A number of critics have written about the antisemitic overtones in parts of the film, which were common in works of the period.

It is mentioned in the catalog and we have one chapter of the exhibition where we show some objects. It is mentioned, but it is also well known, since there are many texts and books published about this. [The antisemitism] is not that visible on first sight, but we try to show it in some way. [Murnau] also did not film everything that was in the script. There was a Jewish person, an antisemitic stereotype, in the script, and he did not use that for the film.

There are also antisemitic connotations of the house broker, Knock, even though he was played by Alexander Granach, who was a Jewish actor. He also left Germany for New York later.

It’s interesting that there was a Jewish actor playing a stereotypical caricature.

Absolutely, yes, but for this time, it was considered normal, in some way. Also, remember that Henrik Galleen, the screenwriter, was Jewish. And the stereotypes are in the script.

It took several years to bring this exhibition together. What started the process?

The genesis of this was that the remains of the estate of Albin Grau, the producer and set designer, were found by a German scientist a few years ago. Now they are open to the public. You can see them in Switzerland. We had all the schedules, all the material, all the notes from him. We could also see that he had a strong connection to art. He claimed to have studied art in Dresden, but he never did. But he worked in advertising and he made many sketches for advertising companies. We could see how he used this piece of art, or he used that painting. So we looked at this and we saw many connections.

One of the most fascinating parts of the exhibition are the paintings used for the advertising posters. They’re striking Expressionist works in and of themselves.

In every magazine, every newspaper, you could see these articles and these pictures of Nosferatu. They had film posters for every big place in Berlin—for Alexanderplatz, for Gleisdreieck—and each film poster was different. The campaign was more expensive than the film. The posters alone are worth it to see the exhibition.

It’s really striking just how familiar many of these images are, partly because of the physicality of Max Schreck, the actor who plays Count Orlok. The scene where he’s rising out of his coffin is just iconic.

So iconic. There are so many memes and gifs of this.

Why do you think this film has stayed so prominent in the pop cultural lexicon?

For many people, it’s about the vampire itself, Count Orlok. It’s not a seducer. It’s more like an animal, like an insect. There are many comparisons to nature. Sometimes it looks like a rat, sometimes it looks like a flea, sometimes it looks like a praying mantis. In one scene in the script, Galleen writes that he stands by the window like a spider. Its aesthetic reminds me of modern horror films like The Ring. And [the vampire] breaks through the fourth wall. Once he sees you, you have no chance—you see him come right at you. I saw it last week in the cinema and it still gets me every time.

This conversation has been edited for length and clarity.

Podcast: The Westgate With Rico Gagliano

The inside story of a flop that changed one theater's history.
nature

A gift guide from the Atlas Obscura team.
museums

This kiss is more than just a kiss.
vampires

From Dracula’s Indian inspiration to just how long it would take these mythical bloodsuckers to annihilate humanity.
Video