Notes From the Field: Velaslavasay Panorama - Atlas Obscura
Want to see fewer ads? Become a Member.
In This Story
Place

I think it is fair to say that all of us at Atlas Obscura are retro-tech enthusiasts. Give us a chance to check out some sweet pneumatic tubes or visit with weird taxidermy monkey automatons, we’re all over it — but we are particularly charmed to find places where those old traditions have been brought back to live in new and unusual ways. The Velaslavasay Panorama in Los Angles is the inheritor of two centuries of pre-cinematic artistic influence, creating a three dimensional, 360 degree immersive illusion of an Arctic ice floe, complete with mood lighting and an evocative soundscape using some very old fashioned techniques.

Being from the Bay Area, I had never had the opportunity to visit in person, but I had heard wonderful things about the theater and rumors of a garden worth visiting. During my recent visit to LA, Rachel and I set out to find out more about this tribute to a lost art. Although the simple painting technique dates to much earlier, panoramas found their height of popularity in the mid-Victorian times following the lead of an Irish entrepreneur and artist by the name of Robert Barker. His extraordinary circular paintings of city scenes in-the-round became enormously popular. All over the world, panoramas began to emerge, soon combining dioramas and props and even dramatically posed mannequins to recreate great moments in history, and, in particular, great moments on the battlefield.

One of Robert Barker’s London panoramas

A few historic panoramas still exist: in Wroclaw, Poland, the enormous 120-year-old Raclawice Panorama lets you step into the middle of the 1794 Battle of Racławice, and the largest Victorian-era panorama still in-situ from 1881 can still be seen in Den Haag, Netherlands at the Panorama Mesdag.

In Istanbul, Turkey the Panorma 1453 Museum recreates the epic fall of Constantinople. A more modern example in Damascas, Syria, the October War Panorama, is dedicated to scenes from the 1973 October War between Israel, Egypt, and Syria.

The Velaslavasay in LA was created in 2005 in the old Union Theater which originally opened in 1915. Over the years, the space has been used for many things, including, most recently, as the head of the tile-layers union. The interior of the modest building is immediately charming, with a selection of books on the Arctic, and a small gallery space for displaying artwork. The back part of the building is taken up by the theater space. When we visited on a surprisingly wet day for southern California, we had the place to ourselves.

Atop a petite staircase we found ourselves in a small, darkened space, surrounded by the panorama. Inside the panorama space, the installation, named the “Effulgence of the North,” surrounded us with sights and sounds of the Arctic wilderness. Icebergs seem to flow, ready to crash into each other, as the sounds of sea birds and lapping water reverberate in the circular space. The effect is enchanting and a little melancholic. The Velaslavasay does indeed have a very lovely garden behind the main theater space, filled with beautiful flowering plants and tiny garden structures inviting us to linger. 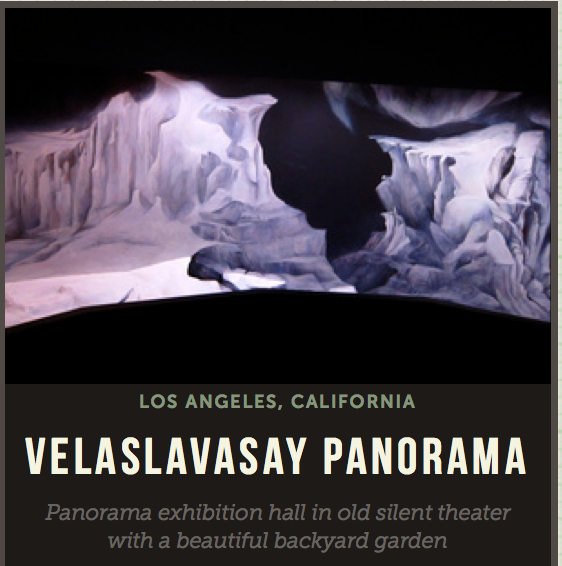 GO FOR THE ICEBERGS, STAY FOR THE PASSIONFLOWERS:

All photos by Annetta Black/Atlas Obscura

RIP Cyclorama: A Brutalist Behemoth that Once Housed an Epic Panorama