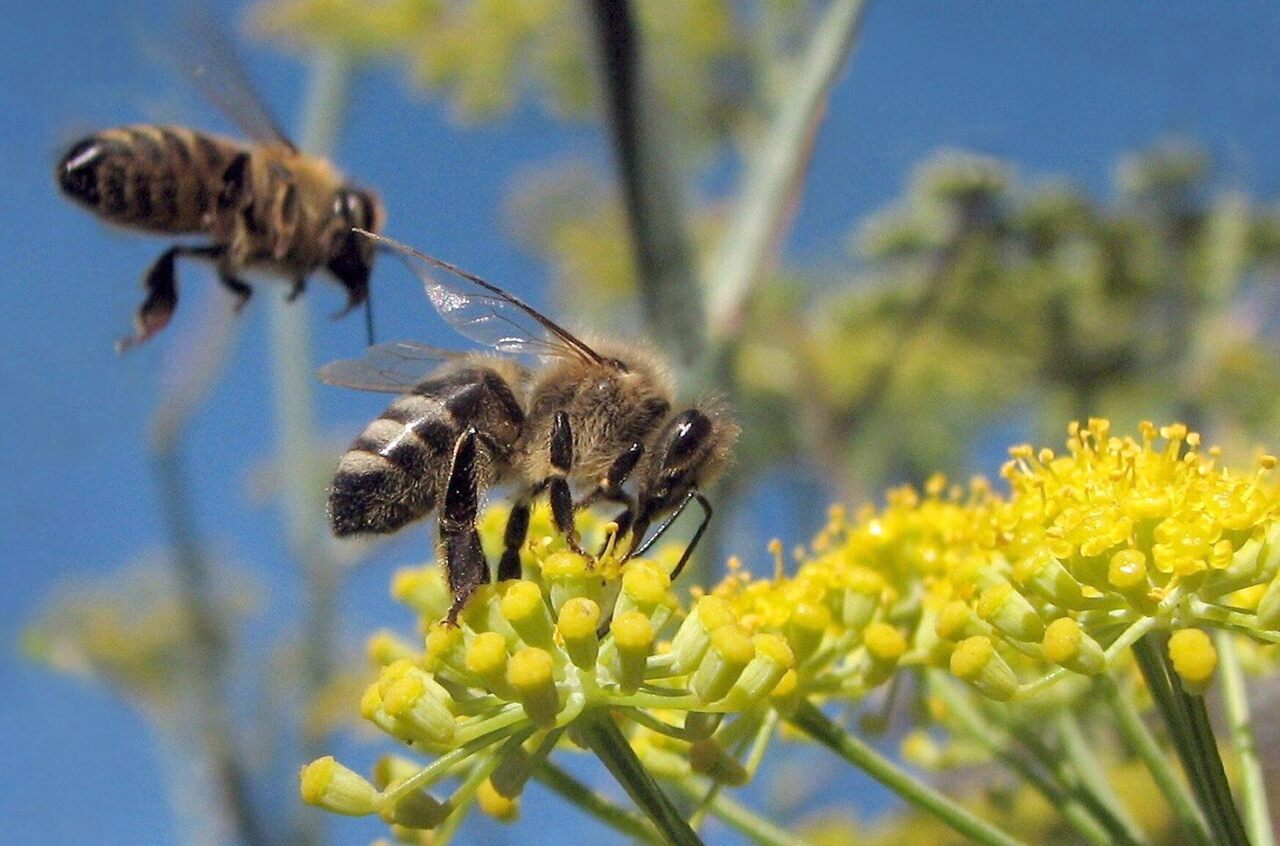 Bees, pictured here flocking to wild fennel, could have gotten more than they're bargaining for. Jack Wolf/CC BY-ND 2.0
In This Story
Place

A picture-perfect town, perfect for blowing up.

This story was originally published in the Bulletin of the Atomic Scientists and appears here as part of our Climate Desk collaboration.

In the 1940s, scientists discovered that uranium and plutonium could fuel previously unimaginable explosions.* Soon after, the U.S. government developed and tested hundreds of nuclear weapons—first in the American West and later in the Pacific Islands. These nuclear tests caused blasts that released radioactive isotopes such as cesium 137 into the atmosphere. Later, in 1963, the United States signed the Treaty Banning Nuclear Weapons Tests in the Atmosphere, in Outer Space, and Under Water, after which it stopped testing nuclear weapons. But the environmental story does not end here, as radioactive isotopes live on.

“Once you put a pollutant into the environment, you can’t anticipate how many decades later it’s going to remain in plants or the food supply,” says Jim Kaste, an earth scientist at The College of William and Mary. Kaste recently uncovered remnants of cesium 137, which has a half-life of about 30 years, in today’s U.S. honey—results he published in March in a Nature Communications paper. Though levels of this radioactive isotope in honey do not pose a threat to humans, the finding offers a lesson about the persistence of human-made environmental pollutants.

Even after the skies above the Western and Pacific atomic bomb testing grounds grew quiet, cesium 137 from the tests permeated the clouds. From there, it drifted thousands of miles through the stratosphere over the dry American West and later fell with rain in the humid subtropical land east of the Mississippi River. Plants in potassium-rich soils, such as those rooted close to bedrock in the Northeast, ignored the radioactive isotope, favoring to send potassium up its straw-like channels instead. But those in potassium-deficient soils of the Southeast confused cesium 137 with potassium. (In the plants’ defense, the two elements have similar atomic appearances; both are in the first column on the periodic table.) These plants then manufactured nectar spiked with cesium 137 that unsuspecting bees gathered, brought back to their hives, and transformed into cesium-137-infused honey in amounts that remain detectable today.

“There’s no reason to think that it’s at dangerous levels now, but it probably exceeded some national standards in the 1960s and 70s,” says Kaste, who often enjoys eating honey with his kids. Still, he suspects that his research offers evidence that the radioactive isotope in honey from southeastern states may have contributed to the decline in populations of bees and other pollinating insects in recent decades.

“This should be one of the hypotheses we consider in the suite of other environmental stressors on insects,” says Kaste, who notes that urbanization, agriculture, and monocrops also have detrimental effects on pollinator health.

Janice Mercieri, an award-winning beekeeper at New Hampshire’s White Mountain Apiary, mentions another pollinator stressor: pesticides. “Like the old [Joni Mitchell] song says, ‘give me spots on my apples, but leave me the birds and the bees,’” Mercieri says. Pollinators play a role in maintaining global food security, which is why scientists and beekeepers seek to understand and minimize this perfect storm of stressors.

Early atomic scientists may never have hypothesized that future, faraway plants would mistake a bomb product for a nutrient and ingest it over generations, with possible cascading negative repercussions on bees and other insects. In time, however, scientists have learned that U.S. nuclear bomb tests had devastating human and ecological consequences. From an environmental point of view, the Nevada Test Site and the Bikini, Enewetak, Moruroa, and Fangataufa atolls remain critically contaminated. Also, radioactive fallout from atomic bomb testing moved through atmospheric, terrestrial, and marine environments and, in the process, entered the global food chain.

“People don’t realize that all of those bomb tests make Fukushima and Chernobyl look small if you take into account the environmental radiation into the atmosphere. We’ve moved on from the 1960s. We really have,” says Kaste, who views his recent research results as a wakeup call.

Human-made environmental pollutants may have lasting impacts on ecosystems and people hundreds or even thousands of miles away. Small-scale gold mines, for example, accounted for almost half of global mercury pollution in one estimate. Humans who ingest water or fish that contain mercury are at risk for a range of nervous system and neurological problems.

Likewise, thousands of tons of microplastics—fragments from plastic bottles or microfibers from clothes—have been transported by wind and rain now show up in remote regions of the world, including the Great Basin and Craters of the Moon National Monument and Preserve, managed by the National Park Service. Inhaled or ingested microplastic particles are small enough to lodge in human organs, where they may damage cells or induce inflammatory or immune reactions.

Unlike the cesium 137 found in honey—which is expected to decay to undetectable levels in coming decades—mercury and microplastics do not have half-lives ensuring their disappearance over time. Once non-decomposable pollutants enter an ecosystem, they remain “until geological processes recycle that whole ecosystem—on a plate-tectonic time scale,” according to Kaste.

The presence of cesium 137 in honey may seem ephemeral on a plate-tectonic time scale. Still, knowledge of radioactive material in this sweet treat today offers an important cautionary tale for anyone willing to listen: Human-made environmental pollutants travel far and wide—and some will last for generation upon generation.

*Correction: An earlier version of this story began with the phrase, “In the 1950s.”

The Collectors Who Hunt Down Radioactive Glassware

The Zen Beekeeper Returning Hives to the Wild

By handling bees with his bare hands, Michael Joshin Thiele seeks to better understand them.
monuments

Bees make honey on the rooftops of the Notre Dame and Musée d'Orsay.
abandoned

The free how-to dispels myths and minimizes the hazards of hunting and hoarding these special specimens.
Video • AO Docs

A smoky doorway in Dakar leads to one of the city’s great communal eating experiences.
Napa, California

One man handcrafts "the best sake made outside of Japan" in a tiny desert town on Route 66.
Want to see fewer ads? Become a Member.
From Around the Web
Related

A smoky-sweet flavor, courtesy of an invasive species.
Read more
Thanks for sharing!