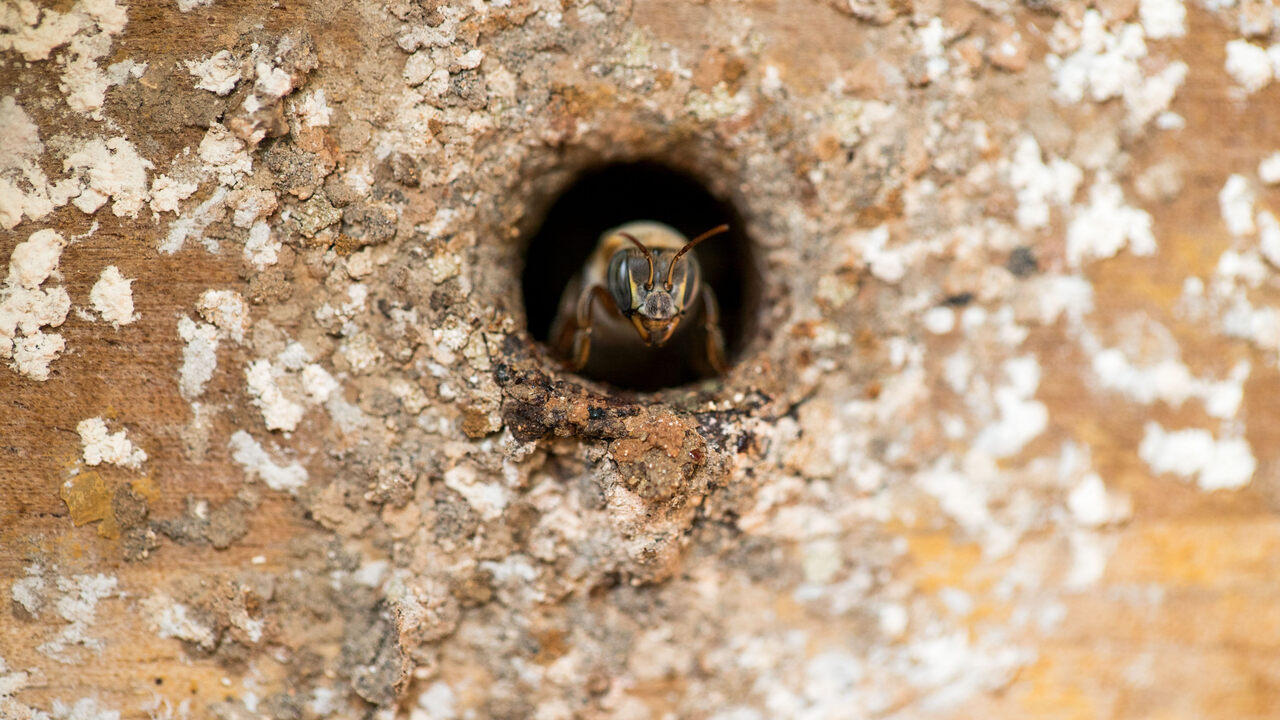 A balam-kab, a bee whose sole work is to guard and protect the hive's entrance from intruders. All photos by Agostino Petroni
In This Story
Destination Guide

Efrain Cab, a 34-year-old beekeeper who runs a hotline for stingless bees in need, stood in front of the wall of a hotel in Playa del Carmen, Mexico, with a hammer in his hand.

He had responded to an emergency text from 11-year-old Eugenia, who had secretly contacted Cab from her mother’s phone. She wanted to save the bees her parents intended to fumigate.

Eugenia now pointed at a small hole in a brick wall.

“Put pieces of tissue inside your ear, and do not squash them when they get entangled in your hair. They’re just defending themselves,” Cab said with a stern look.

With precise movements, he started hammering the wall. As he cautiously pulled out the debris, a swarm of stingless bees poured out, flying into his beard, hair, and ears. Undeterred, Cab surgically removed the alien-looking hive and placed it inside a wooden box he had brought along. Cab’s face soon took on a sheen of sweat, as he strove not to hurt the swarm. Before closing the lid of the box, he added in the dazed bees who had not left the shelter, one by one, and made sure the queen was in the hive.

“Now they have to rest,” Cab said, visibly exhausted.

There are around 500 species of Meliponini stingless bees in tropical and subtropical areas around the world. 47 live in Mexico, and the most famous bee in the Yucatán peninsula is Melipona beecheii, known by the Mayans as Xunan Kab, or the Regal Lady Bee.

Meliponini honey is rare and expensive. In the United States, 250 grams of Meliponini honey costs around $50. Stingless bees live in small colonies and produce just over three pounds of honey per year, while their stinging counterparts produce almost 20 times more. They store their liquid honey in small waxy pots built into their hives. Its flavor is an explosion of acidity and sweetness, paired with an intense flowery fragrance.

But Cab doesn’t aim to profit off the bees for their honey. Loading the hive into his car, he drove it back to his home in the Playa del Carmen suburbs, where he runs Trigonario Urbano Cab, a hospital for rescued stingless bees. The rescued hive would rest and recuperate amongst 60 other colonies, before Cab would take them to their final home: a sanctuary he has built in the middle of the Mayan jungle.

“Cab means bee,” Cab tells me, adding that he learned about bees from his father and grandfather, both beekeepers themselves. In fact, he claims that all his ancestors were Meliponini beekeepers. But it wasn’t until 2001 that he started taking care of his own hives. A friend working in construction asked him to pick up a colony that otherwise would have been destroyed. Then he saved a second hive, and then a third. News of his bee operation started spreading. Since then, Cab the beekeeper has saved more than 100 hives.

Jorge Gonzalez Acereto is a bee expert and former professor at the Autonomous University of Yucatán. A beekeeper himself with 40 colonies, Acereto notes that Meliponini bees were central to the Mayan cosmogony, or their vision of how the universe came to be.

“The Mayans believed that the bees were a gift from the gods,” Acereto says. Ancient Mayans thought that nectar was a concentration of the sun’s power, which bees transferred into their honey. Mayans cared for bees religiously, and the bees, in turn, gave them wax, honey, and pollinated crops.

Maria Luisa Dorantes, Cab’s mother, explains that Mayan descendants use Meliponini honey primarily as a medicine. “If you get a bad cut which doesn’t heal, you wrap the honey around it and it’s gone in three days,” Dorantes says. Daughter of a herbadera, a Mayan herbalist, Dorantes notes that the honey is also used to treat a variety of diseases, including cataracts, ulcers, and diabetes. Her claim is supported by bacteriologists, who have studied how Meliponini honey’s acidity and high levels of bacillus effectively inhibit pathogenic bacterial growth.

Acereto explains that beekeepers provided a central social service for the ancient Mayan community, by providing honey for free when the sick needed it. Beekeeping was a charitable activity, for which they could not ask for anything in return.

“This is the inheritance that I have, and I have to protect it,” Cab says. He makes his living as a construction worker, but spends all his free time with the bees. Cab doesn’t often sell his honey, and usually harvests it for his family and to help others in need.

With the colonization of the peninsula in the 17th century, the Spaniards introduced Apis mellifera, the common stinging bee, which aggressively invaded Meliponini territory. Many beekeepers began rearing the new bees for their higher honey production. Just a few domestic hives of Meliponini, kept in the remotest Mayan villages, survived the change.

Cab’s untiring efforts to rescue hives is essential work. Ricardo Ayala Barajas, a bee taxonomist at the Biology Institute of the National Autonomous University of Mexico, said that although there is a cultural push to protect stingless bees, they are still endangered. Barajas names pesticides, deforestation, and careless beekeeping practices as causes of the decline.

“We’ll reach a point of no return soon,” Barajas says.

Efrain Cab is not the only stingless beekeeper. Meliponini honey is highly lucrative. Acereto explains that as demand for the precious honey went up, foreigners and greedy beekeepers began venturing into the jungle to cut down trees to get to Meliponini hives. New beekeepers do not seem to understand the ancestral techniques used to harvest the colonies, which is key to keeping bees healthy. Many end up killing the fragile hives, Acereto adds.

Valerio, Cab’s father, says that not everybody is suited for the task of keeping stingless bees. Tradition requires a certain purity on the part of the beekeeper. “You cannot take care of the bee without being ready,” he says. “You cannot drink alcohol and you need harmony within the family. If bees feel the tension, they go away or die.”

After a period of rest and rebuilding, Cab took Eugenia’s hive back into the forest. A wooden canopy, constructed by Cab, shelters the harmless stingless bees. It is hidden deep within the jungle, where, legend has it, spirits and forgotten gods still roam.

Cab is now teaching his four-year-old son to care for the bees. His hope is that there will be someone to safeguard the bees, when he is gone. “This is what I will leave to my children,” Cab says. “Because I don’t believe in money.”

A smoky-sweet flavor, courtesy of an invasive species.
food

The Zen Beekeeper Returning Hives to the Wild

By handling bees with his bare hands, Michael Joshin Thiele seeks to better understand them.
Video

This museum tells the history of Day of the Dead sugar sculptures.
Mexico City, Mexico

By night, this auto repair shop turns into a taquería serving up some of the city's finest al pastor tacos.
Tlalixtac de Cabrera, Mexico

Get three sheets to the wind at this desert winery with a nautical theme.
Oaxaca, Mexico

In a quiet residential neighborhood, one restaurant fights to preserve heirloom corn, one tortilla at a time.
Want to see fewer ads? Become a Member.
From Around the Web
Atlas Obscura Trips
Oaxaca: Tastes of Past & Present
View This Trip
Thanks for sharing!