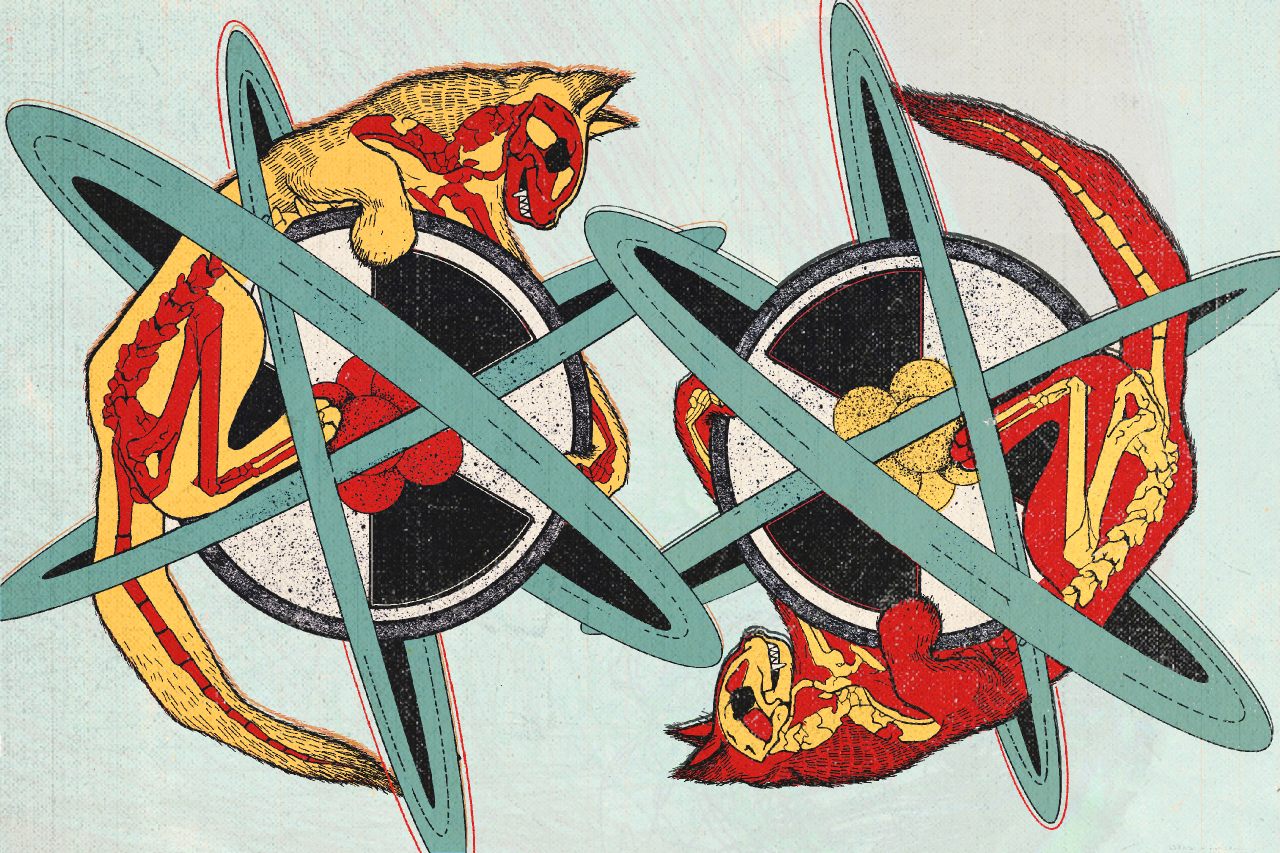 Could we genetically engineer cats to glow when exposed to radiation, thus warning future generations about nuclear waste sites? All illustrations: Anna Sorokina for Atlas Obscura

Olkiluoto is a pine-covered island jutting out into the Baltic Sea, just off the western coast of Finland. Beneath the surface, there’s 2-billion-year-old bedrock made mostly of gneiss, hard as steel. It’s here that engineers are digging a facility known as Onkalo, Finnish for “cavity” or “pit.” They’re constructing a tomb, a quarter of a mile underground, to store spent uranium rods from nuclear power plants for the next 100,000 years. And depending on who you ask, future generations might be warned away from sites like it by glowing cats.

Onkalo, which when it begins operations around 2025 will be the world’s first permanent nuclear waste repository, is the product of decades of thinking around the fact that nuclear waste’s potential for harm won’t just outlive everyone alive today—it may outlive entire languages and civilizations. How do you protect people who will live further in the future than humans have even existed?

Humans have only been around for 300,000 years, and the oldest living language, Tamil, is 5,000 years old—the blink of an eye on a nuclear time scale. While most forms of radioactive waste cease being a problem in a century or two, some materials continue to emit radiation for more than a million years, and if they contaminate the groundwater, they could sicken people in the distant future.

Nuclear physicists and engineers have teamed up with linguists, psychologists, and science fiction writers to figure out how to warn future generations away from radioactive sites. The problem is complicated by the fact that even seemingly universal symbols for danger, like a skull or a screaming face, might not make sense to future cultures.

In 1993, the Sandia National Laboratories in New Mexico and California published a report on the types of information that long-term nuclear warnings need to convey. The report contains an eerie template for this messaging: “This place is not a place of honor… no highly esteemed deed is commemorated here… nothing valued is here.”

Various corners of the Internet are big fans of this language; you can buy “This place is not a place of honor” posters and even booty shorts. But while the words are haunting, how do you convey ideas like these without writing anything down? The Sandia report covers ideas ranging from spooky signage to giant spike fields, but they aren’t the first suggestions for warding people away, or the strangest.

In the 1980s, writer Francoise Bathide and expert in semiotics (an academic cousin of linguistics, focused on how to convey meaning) Paolo Fabbri put their heads together. They reasoned that cats have been living alongside humans for thousands of years. What if, Bathide and Fabbri supposed, we genetically engineered cats to glow when exposed to radiation? And then, what if we began seeding into oral tradition stories about how if your cat starts glowing, you need to get out? The “ray cat solution” was born, and since then, it’s beamed its way into public consciousness via articles, podcasts, and even songs.

Ray cats aren’t the only oddball suggestion for warning future generations about radiation; others have proposed creating an “atomic priesthood” to protect and pass down information about nuclear hazards. On the surface, these ideas seem crazy. But are they so crazy that they just might work?

“These are those stories that you can use at dinner parties all the time—ray cats and the atomic priesthood are my bread and butter for a good happy hour conversation,” says Sam Brinton, the deputy assistant secretary of the office of spent fuel and waste disposition at the US Department of Energy. But logistically, ray cats present major problems.

For instance, Brinton notes, “genetically engineering cats to glow when radiation is near them is not something that, to my knowledge, we are not currently able to do.” And even if we had the technical know-how to make ray cats, creating them is only half the battle– we need people to pass down what they’re supposed to mean. As anyone who’s played a game of “telephone” or heard some juicy gossip that turned out to be only half-true knows, it’s easy for stories to get corrupted as they’re retold. But, as Linnaeus University archaeologist Cornelius Holtorf points out, the story of the ray cats “has lasted, what is it? 40 years now? That’s not the same as 1,000 years. But still, it is something.”

Ray cats’ staying power is evidenced by the 2014 folk-rock bop, “10​,​000​-​Year Earworm to Discourage Settlement Near Nuclear Waste Repositories (Don’t Change Color, Kitty)” by Emperor X. The songwriter, whose real name is Chad Matheny, remembers first hearing about long-term nuclear waste messaging on a TV show when he was a kid in the early 90s. At the time, he was terrified, so writing a “somewhat cheerful response to this was kind of a full circle for me,” he says.

Despite writing the song (which you can watch the idea’s originator Paolo Fabbri listening to in the short documentary The Ray Cat Solution), Matheny doesn’t necessarily think fluorescent felines are the way of the future. “I think it’s very unlikely that we’ll be singing the song in 10,000 years to discourage settlement near nuclear waste,” he says. “But I do think the fact that we’re thinking about it will probably engender some thought in some directions, either against ever arriving at that future, or towards a good survival mechanism.”

Meanwhile, nuclear waste sites like the Finnish Onkalo have leaned towards another means of protecting future generations: being really, really hard to get to.

“There is a desire to have engineered solutions before we use procedures or human-based systems to conduct safety, significant functions,” says Steve Krahn, a professor of nuclear environmental engineering at Vanderbilt University. “Things such as building deep geological repositories are believed to provide greater assurance and greater protection of humans and the environment than an atomic priesthood that would warn people away from possibly more accessible sites.”

Case in point: before arriving at Onkalo, the uranium fuel rods will have spent decades cooling in tanks of water. They’ll then be placed in a non-corrosive copper capsule and buried in layers of clay and concrete, a quarter of a mile into the Earth.

“It’s very hypothetical question, ‘what if the future people come and they start digging?’” says Pasi Tuohimaa, the head of communications at the Finnish nuclear energy company working on Onkalo. “It would be really, really difficult to go half a kilometer in the bedrock. And when we fill up the tunnels, it would take 10 years for somebody to get in there.” If a future society is technologically advanced enough to reach the waste, they’ll probably be able to cope, with or without the help of warnings from glowing cats.

The free how-to dispels myths and minimizes the hazards of hunting and hoarding these special specimens.
radioactive

How and why the harvested body parts of atomic bomb victims spent decades abroad before being returned to Hiroshima.
radioactive

Few of them seem to miss the missing humans.
Want to see fewer ads? Become a Member.
From Around the Web
THE GASTRO OBSCURA BOOK
Taste the World!
An eye-opening journey through the history, culture, and places of the culinary world. Order Now