A 100-year-old purveyor of curiosities, curios, and kitsch featuring mummies, shrunken heads, and a Fiji Mermaid. 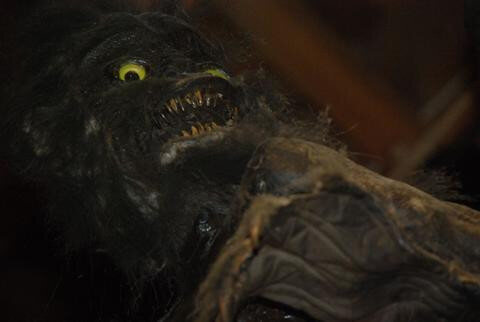 “…I have heard the mermaids singing, each to each.
I do not think that they will sing to me.

I have seen them riding seaward on the waves
Combing the white hair of the waves blown back
When the wind blows the water white and black.

We have lingered in the chambers of the sea
By sea-girls wreathed with seaweed red and brown
Till human voices wake us, and we drown.”

The beautiful mermaids of legends and lore lured men to a watery grave with their siren songs and fishy wiles. Described since antiquity by sailors, pirates, and fishermen, the stories date back at least a thousand years and span cultures around the globe from ancient Assyria to Norman England and beyond.

Perhaps surprisingly, first hand reports are abundant, including in 1493 when a trio of frolicsome mermaids were spotted off the coast of Hispaniola by Christopher Columbus and his men, described by the disappointed-sounding crew as simply “not as beautiful as they are represented.”

In 1610, Henry Hudson reported seeing a mermaid off the coast of Greenland. He wrote a more alluring account of the encounter: “One of our company, looking overboard, saw a mermaid and, calling up some of the company to see her, one more came up and then she was close to the ship’s side looking earnestly on the men. Soon afterward a sea came and overturned her. Her back and breasts were like a woman’s, her body as big as one of us, her skin very white and long black hair hanging down behind. In her going down they saw her tail, like the tail of a porpoise, and speckled like mackerel.”

Mermaids have stood for longing and loss, been the embodiment of the loneliness of sailors far from home, and a symbol of the danger of both women and the sea. Their beauty is always a trap. 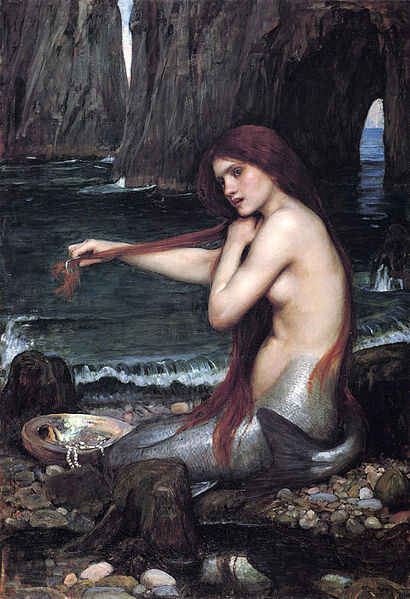 Mermaid-inspired fiction, poetry, and artwork flourished in the Victorian era, appearing as a staple in Pre-Raphaelite paintings, described as self-absorbed mean girls in J.M. Barrie’s Peter Pan, and, most famously, as the innocent lover the tragic fable The Little Mermaid by Hans Christian Andersen, published in 1836. An eager public was primed in this, the last great era of exploration and the modern era of scientific discovery, for a true specimen to be discovered and caught at last… which is exactly what happened in New York in the spring of 1842.

Mummified mer-creatures had been kicking around sideshows and fishing villages — particularly in Japan — for generations, some more impressive than the diminutive beast that appeared in New York City. But none of those were backed up by the creativity of Phineas Taylor Barnum. 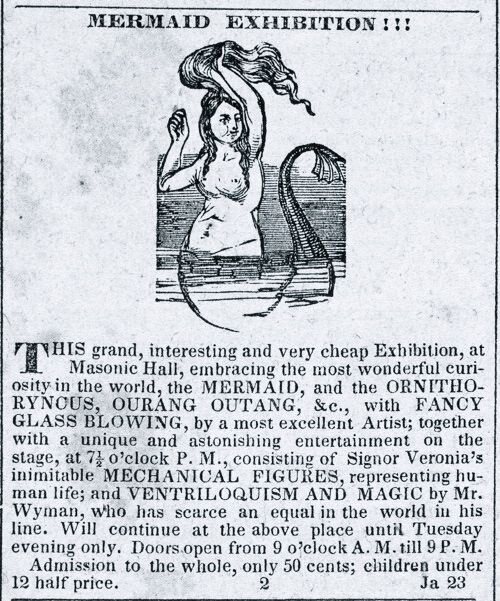 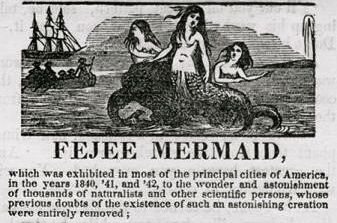 The story goes like this: P.T. Barnum came across the remarkable tale of an eminent British naturalist by the name of Dr. Griffin who had obtained the remains of a real mermaid. Barnum approached this man of science and attempted to convince him to display this wonder, but came away empty handed until an eager public demanded their opportunity to inspect this curiosity of the seas.

Barnum and this Dr. Griffin ultimately capitulated to public enthusiasm and opened the doors for one week in New York City, and the crowds descended.

But for those expecting to see the lovely creatures depicted in the advertisements (shown above), there was bound to be some disappointment.

In truth, the half-monkey, half-fish gaff was the property of Moses Kimball, Barnum’s one-time rival and later associate, and the so-called Dr. Griffith was in fact a persona adopted by another of Barnum’s associates by the name of Levi Lyman. The mermaid most likely originated from Japan where it had been purchased and brought back to the United States by a fisherman, from whose son Kimball finally purchased it. 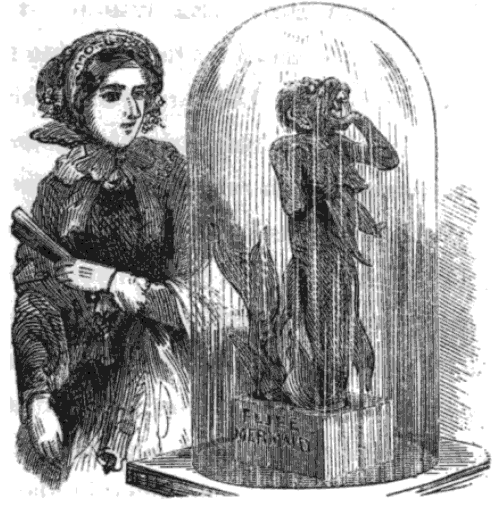 Despite not being a beautiful girl fish and its seemingly obvious fakery, the so-called Fiji Mermaid was an immediate sensation, touring the country and remaining on display until it either disappeared in the fire that consumed Barnum’s museum in 1865 ,or when Kimball’s was similarly destroyed in 1880, no one is completely sure.

Since Barnum’s famous racket, Fiji Mermaids have become a staple of the sideshow genre, with examples popping up all over the world. In the United States, the mermaid at Seattle’s Ye Olde Curiosity Shop, with a provenance going back to the 1920s and a similarly fishy origin tale, is one of the finest and largest examples of the art in the world. 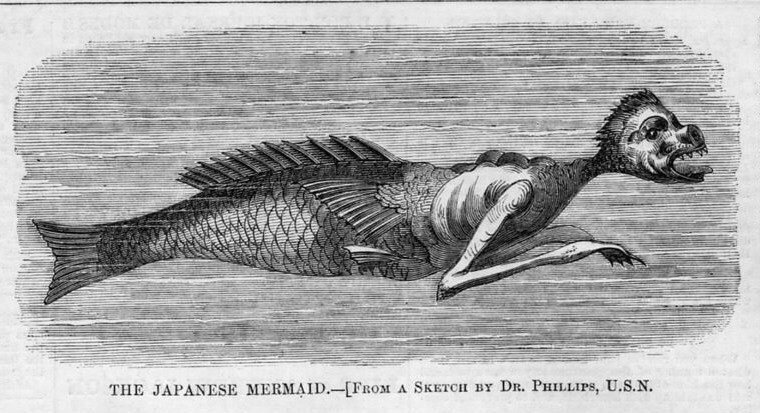 Peg Boettcher from Ye Olde Curiosity Shop gave us a little more background on exactly how their seabeast came to be:

Not long ago, a young couple came into Ye Olde Curiosity Shop. Holding hands, but obviously shy of each other, they seemed to be enjoying their first date. The young woman spoke not a word, but the young man more than made up for her silence with a nonstop stream of chatter, including many, many questions directed at the person behind the counter: me. What about those mummies on display, were they real? And the shrunken heads, how did they do that? Where did the narwhal’s tusk come from? And finally, was the mermaid real?

Our staff hears questions like these a dozen times a day, so I answered him patiently. But some imp got into me at the last one and I said, “Well, it’s a real fish and a real monkey!”

He looked genuinely thunderstruck. “You mean,” he said, “they got those two to mate?”

I did have a chuckle at his expense. But you know, that young man wasn’t far off. The mermaid hanging from the rafters over the jewelry department is an old and venerable example of Asian taxidermy. Reaching back at least 1400 years, the art of creating and preserving “mermaids” is well-documented and a number of samples survive, revered in places such as Karukayado Temple. They were originally made, it is thought, by Japanese fishermen hoping to commemorate an encounter.

Unlike the West’s vision of long-haired beautiful sea-girls, though, Asian mermaids were more monster than maiden. Shriveled and gruesome, they began making their way west in the early 19th century, where they were featured in exhibits like P.T. Barnum’s American Museum. 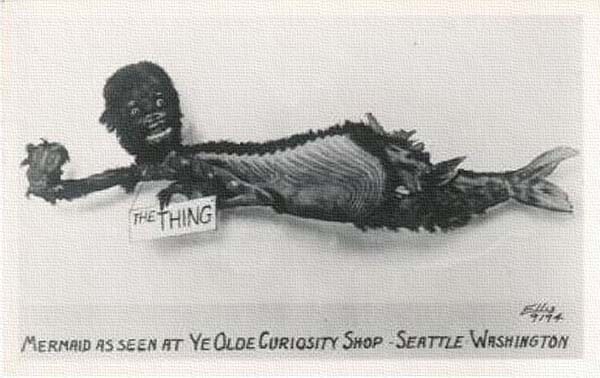 Ye Olde Curiosity Shop’s mermaid arrived in the 1920s. She made a splash in the Seattle Post-Intelligencer of August 23, 1923, when headlines announced her capture by a sports fisherman off the coast of Duckabush: “Puget Sound Nimrods Nab Nimble Nymph.” A photograph showed her cheek-to-cheek with a pretty girl dressed in bobbed hair, cloche hat, and drop-waist dress, the height of fashion at the time.

Frozen in the act of swimming, our mermaid measures over five feet from hairy fish tail to sharp, outstretched claws, making her one of the largest examples known (others have been displayed in Banff, Alberta, and the Cliff House in San Francisco). As if her fang-studded mouth wasn’t scary enough, sometime in the past century her eyes were wired to light up! Today she merely glares down on visitors, her expression fixed in a perpetual snarl. 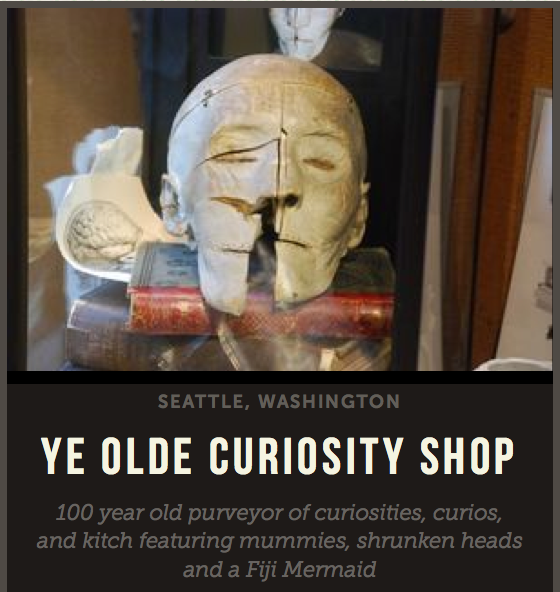 Peg Boettcher delights in wrangling curios at Ye Olde Curiosity Shop, rummaging in the most fascinating attic in the world. Recent additions to the collection include a rhino-foot ash tray base, a full-size vulture mount, and a Kalinga headhunter’s axe blade. Read about more on her discoveries on her blog.

The Fiji Mermaid hangs over the many assorted wonders on display and for sale at Seattle’s Ye Olde Curiosity Shop, 1001 Alaskan Way, Seattle, Washington

Open daily. The shop has rotating seasonal hours, and is always open 10 am - 6 pm, with earlier and later hours in the summer.

For a unique gift, order a pair from the island of Tristan da Cunha.
Video • AO Docs