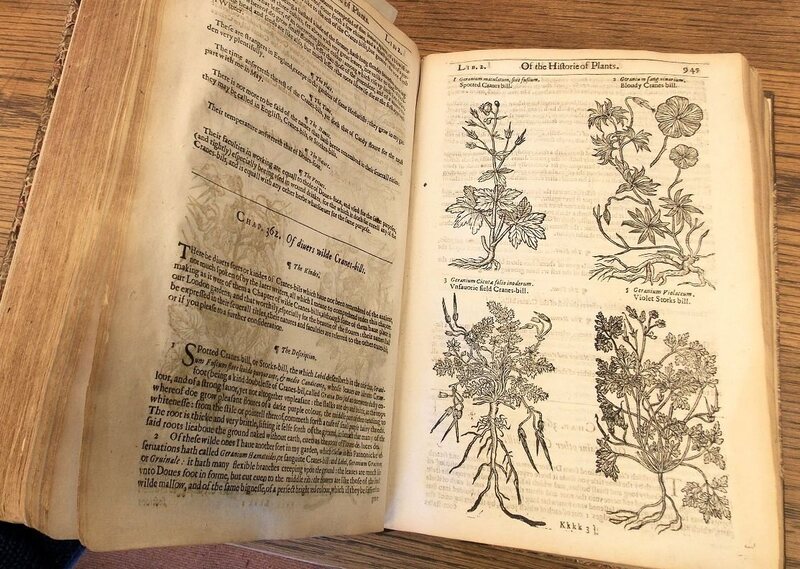 A working knowledge of which plants can heal and which plants might harm is practical information to have at hand in any era. It should be no surprise that a large number of Herbals, collections of information on and illustrations of plants, are numerous in the world’s great collections of rare and ancient books. At the advent of printing in both China and Europe, Herbals were among the first and the most popular books created.

John Gerard was one of the most influential and significant founders of modern botany in England, although by most standards he was no expert on the subject. He seems to have been something of an enthusiastic amateur, cobbling together his work from his own observations, expert advice from those with more specialized knowledge, and the previously published work of others.

Nonetheless, his 1554 publication of The Herball was the first great book of its kind published in English, and went on to be reprinted and re-edited in several editions. The book is beautifully illustrated with woodcuts depicting plants common to England and Northern Europe, and includes basic facts — and a certain amount of myth and misinformation — on the practical uses of these plants.

The Helen Crocker Russell Library of Horticulture at the San Francisco Botanical Garden in Golden Gate Park is primarily dedicated to the everyday needs of the modern gardener or horticulturalist, with an extensive collection of modern works, but in their collection resides not one, but two copies of The Herball.

Brandy Kuhl, Head Librarian at the Helen Crocker Russell Library of Horticulture, gave us a short history of the remarkable work:

John Gerard’s The Herball, or, Generall Historie of Plantes, is the first significant gardening book written in the English language and includes the first description of the potato in English.

While John Gerard was a respected plantsman of his time, he was not the primary author of the Herbal that bears his name. Robert Priest, a member of the London College of Physicians, was commissioned to translate Rembert Dodoens’ Stirpium Historiae Pemptades Sex (1583), but Priest died before it was printed. The manuscript came into the hands of Gerard, who, in 1597, with the addition of a number of plants from North America and his own garden, issued the work as his own. In his introduction Gerard declared that with the death of Priest, “his translation likewise perished,” and claimed it as “the first fruits of these myne owne labours.” 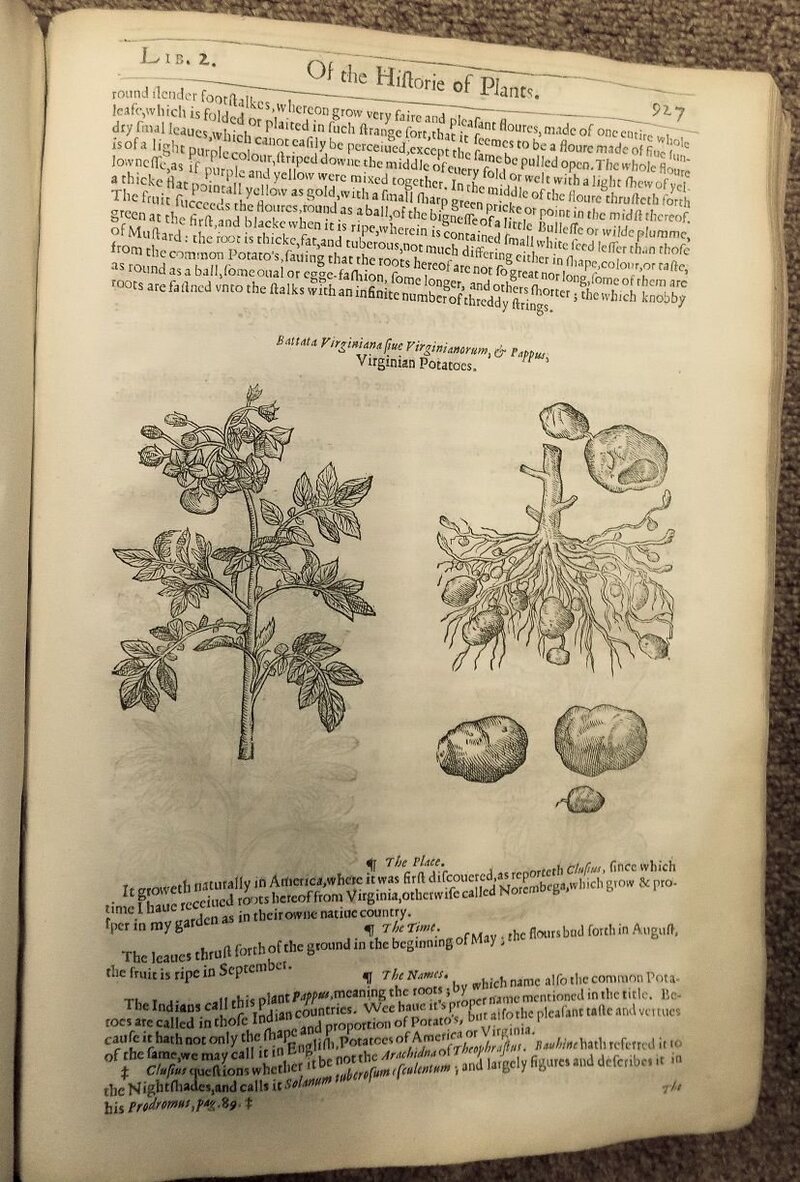 Gerard dedicated the work to William Cecil, Lord Burghley, whose gardens he supervised. The 1633 edition was enlarged and amended by Thomas Johnson, a London apothecary. The Herbal is profusely illustrated with woodcuts, many of which were reproduced from earlier works.

The Helen Crocker Russell Library of Horticulture has two copies of Gerard’s Herbal, the 1633 edition and a 1636 revised, which was rebound at some point. 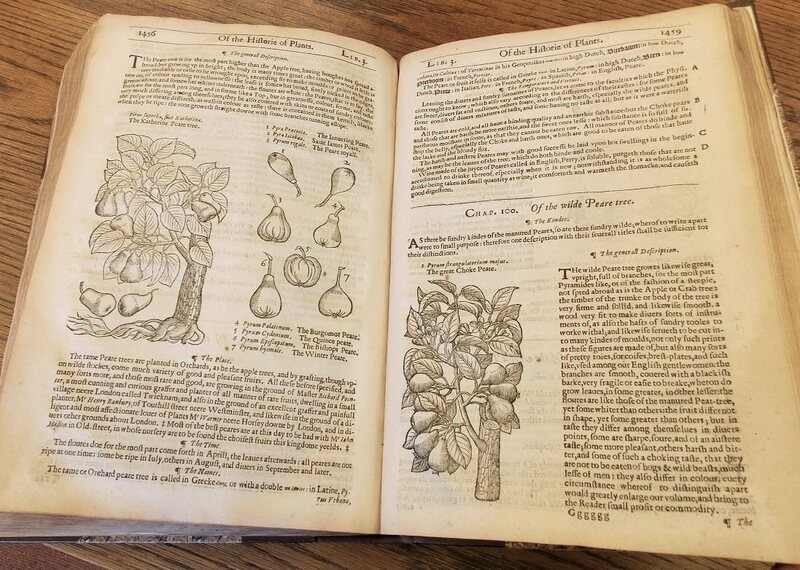 Brandy Kuhl is Head Librarian at the Helen Crocker Russell Library of Horticulture.
She received her master’s degree in library and information science from San Jose State University. She joined the San Francisco Botanical Garden staff in 2007 and has held her current position since August 2010. She is responsible for maintaining, developing, and conserving the most comprehensive horticultural library in northern California and for providing information, library assistance, and subject-specialized reference service to nearly 16,000 patrons each year.

The Helen Crocker Russell Library of Horticulture is open to the public. The Herball is held in the library’s Rare Book Room, not on public display.

Queen's Nuclear Bunker Deep Under Edinburgh Reimagined as a Museum

For a unique gift, order a pair from the island of Tristan da Cunha.
objects of intrigue

Why Modern Meteorologists Use a 19th-Century Crystal Ball

The answer is as simple as sunshine.
Video

Vinyl to thwart criminals? Believe it.
Read more
Thanks for sharing!