It is August 23, 1877 and it’s hot. Sweltering even. California is still a fledgling state; full of farmland, orange trees, and railroads serving the gold mines, as shown in this picture: 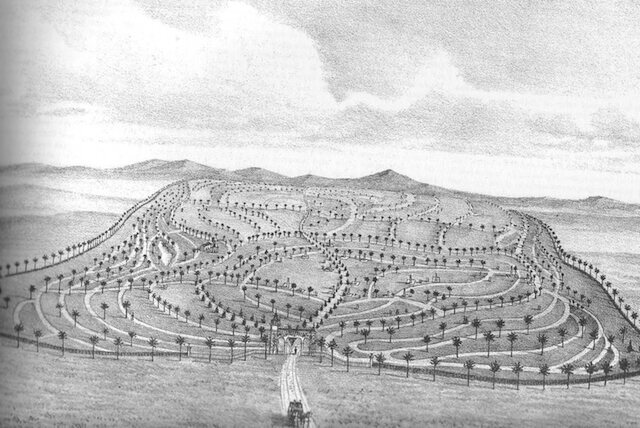 It’s been almost 30 years since the gold rush exploded California’s population. Nearly 27 years ago, 1850, in response to the sudden popularity of the territory, citizens began demanding protection from “outside insurgents” and a more representative government. On September 9, 1850, United States President Zachary Taylor and Congress gave the territory of California its statehood.

A small city named Los Angeles (Spanish for “The Angels”) located in the southern part of the state is growing much faster than municipal services can keep up with. Of course, hospitals, police forces, and fire stations need to be established, but under the radar, something else is missing from this expanding city… a cemetery.

Back to the day at hand: August 23, 1877. On an especially hot day in east Los Angeles, the first official cemetery in the city is opening, called Evergreen Memorial Cemetery Park. People from across the city are lining up to bury their loved ones. Before the cemetery opened it’s doors, most people had been burying their loved ones in their backyards. Today was the day that would all change. From across the city, people brought their dead loved ones for a proper burial. In fact, some families had been waiting for this day for nearly 50 years, their relatives having passed in the early 1830s (many of which still are in the cemetery today). Hot August weather combined with nearly 50 year old bodies did not make the air smell pleasant that first day at Evergreen Cemetery.

Flash forward 135 years into the future; the Evergreen cemetery sits in modern day Boyle Heights, a testament to the history of Los Angeles. Back in November, Obscura Society LA, led by famed LA historian Nick Curry known for his work researching the genealogy of Southern California, ventured onto these hallowed grounds. Their mission was simple: to learn and discover more about their fair city of Los Angeles.

“There’s story on every gravestone,” explained Curry as the group began its descent into the past.

Here are a few pictures and facts from our journey into LA’s history: 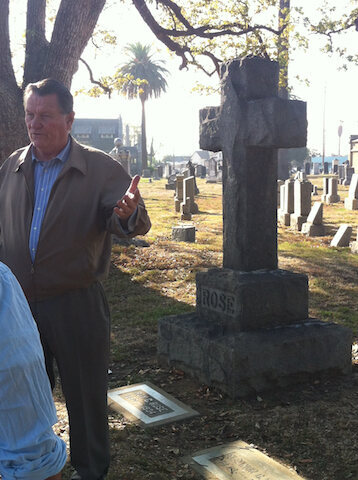 Nick Curry explained how in order for the cemetery to receive the permits needed to zone the block of land, the city required that five acres be allocated as “Potter’s Field,” a place for the unclaimed corpses of the city to go. 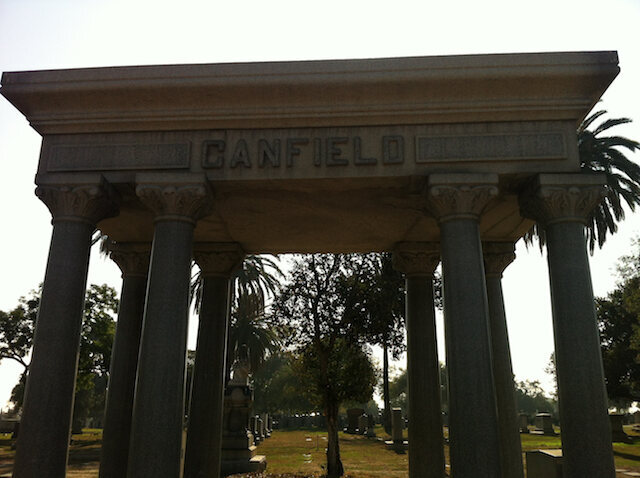 This is the memorial site of Charles Canfield, who along with his business partner Edward Dohney, made the first successful oil strike in Los Angeles. After floundering for years as a real estate developer, oil quickly made him one of the richest men in the city. Unfortunately, tragedy struck when his wife was murdered by a disgruntled former employee. Charles died a few years after that, heart broken. 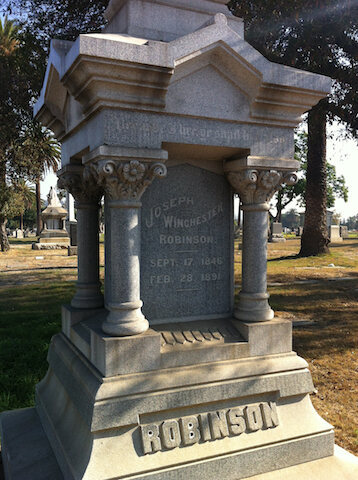 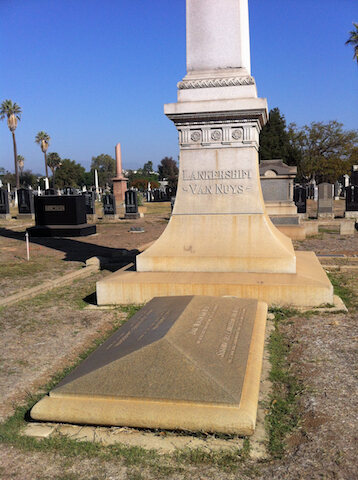 This is the burial site of Isaac Van Nuys and his wife, who was also the daughter of his boss, Miss Lankershim. A hugely successful real estate developer, Isaac engineered what become known in the Los Angeles area as the “real estate sale of the century.” 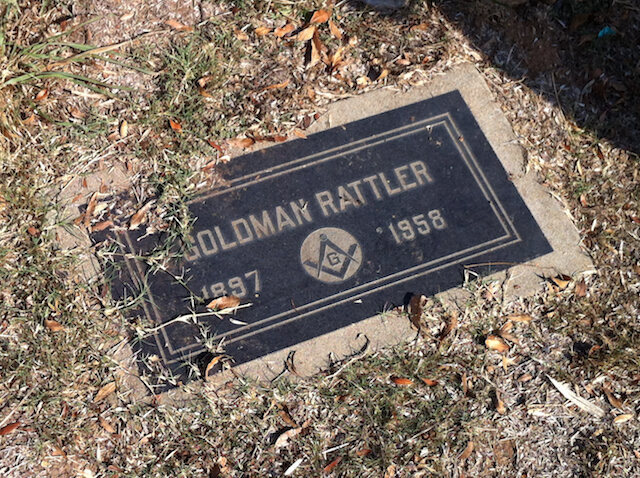 This is the gravesite of Goldman Rattler. No one was quite sure who he was, but he had a pretty badass name.
Here are some more pictures to enjoy: 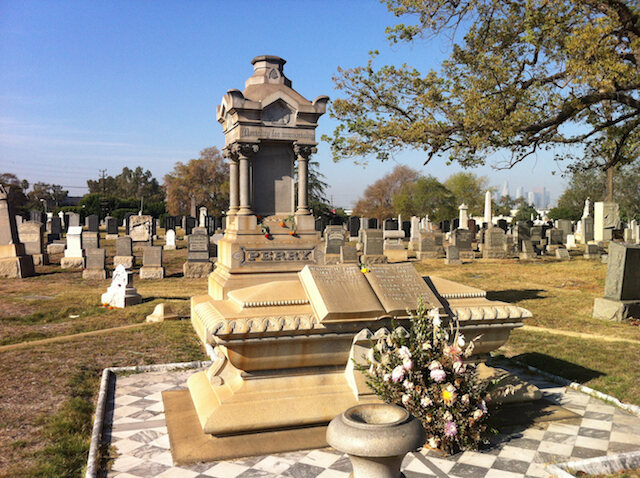 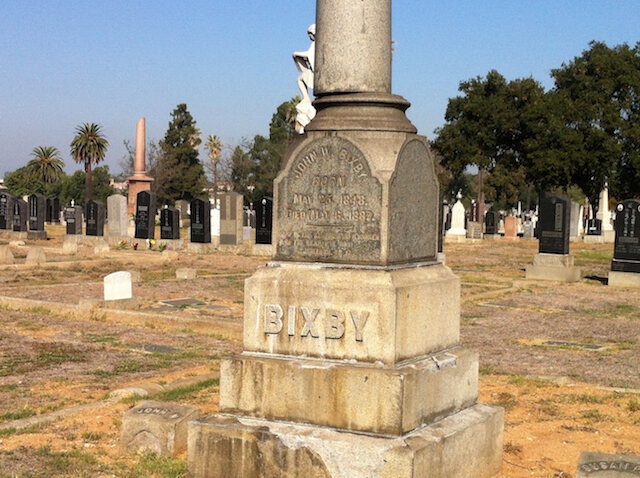 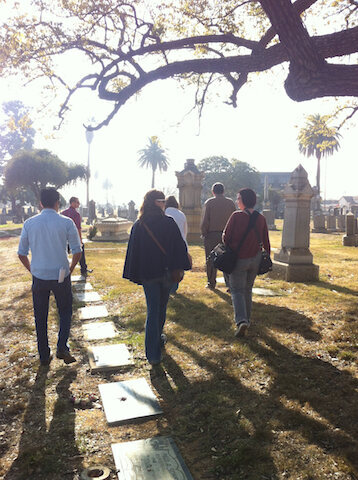 Evergreen Memorial Cemetery is open most days until 6 pm. They do not have any issues with vistors, though it is recommended you give a donation for the use of their grounds. The cemetery is located in Boyle Heights at 204 N Evergreen Avenue, Los Angeles, California 90033, off of the 10 and 5.

While Evergreen does not have an official website, this site has a lot of interesting information and facts: http://www.evergreen-losangeles.com