We’ve been working diligently at Atlas Obscura for months, compiling unique and wondrous locations around the world and dreaming up unusual events in a widespread call for our readers to unite on a single, glorious day in an international celebration of curiosity and discovery. That day was Saturday and thousands of people across the globe participated in 150+ Obscura Day events taking place in more than 35 states and 30 countries. From seeking out the lost Oracle of Dionysus in Bulgaria to tracking the hidden waterways of the world’s longest cave, learning falconry in the desert of Southern California to attending an intimate concert inside a Norwegian mausoleum, this year’s lineup of Obscura Day events is sure to have inspired your sense of wonder.

Here is a partial accounting of the day’s activities—really, only a snapshot from a most incredible day. If you look on Twitter or Instagram with #ObscuraDay, you’re sure to see many, many more moments.

It’s finally here! We had some excitement in the office in the run-up, as a few celebrities (hi Pee-wee!) tweeted out support. But mostly, we are excited to see what people get up to. For instance, I had no idea about this.

And in Germany, they were just setting up:

Even cats wanted to come! 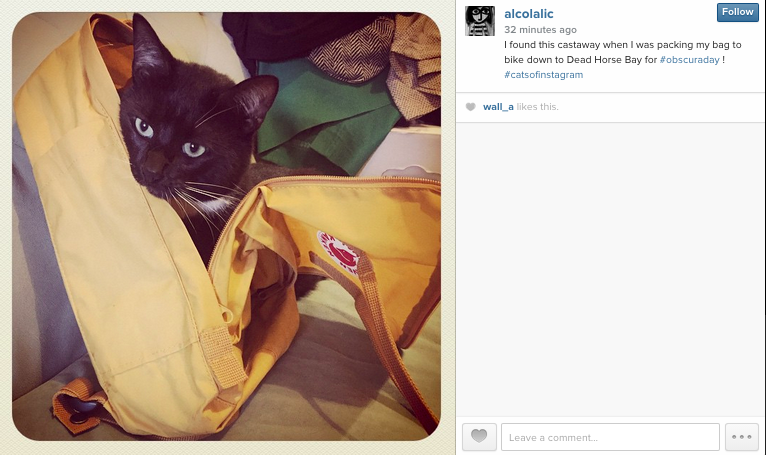 In England, there were some lovely cemetery sightings: 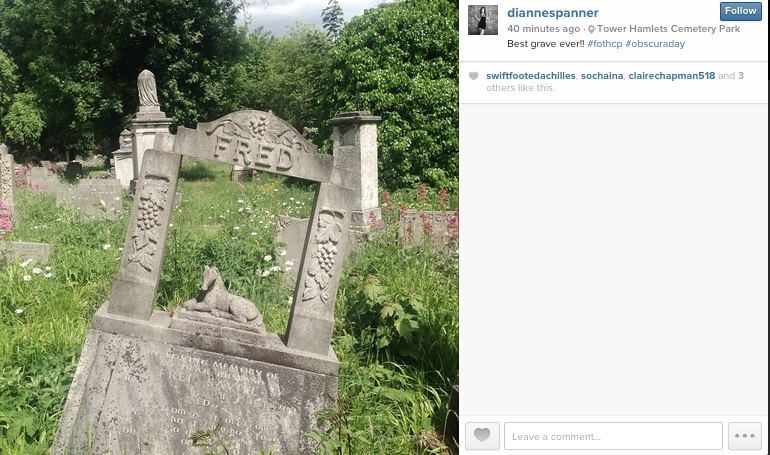 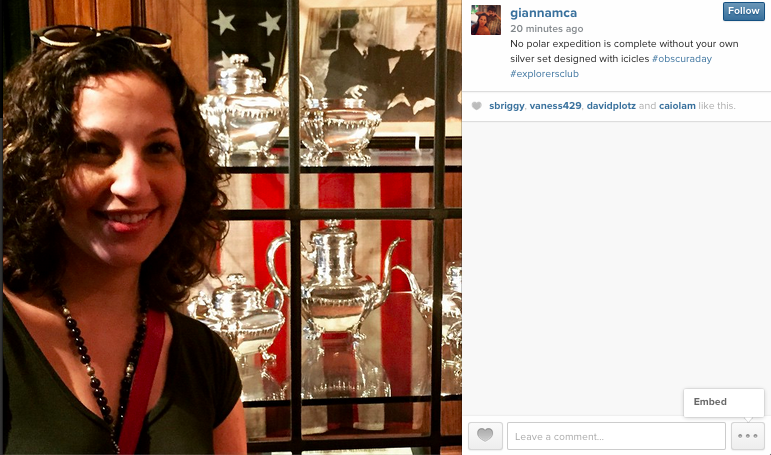 Some fascinating tidbits from trip inside the invite-only Explorer’s Club.

#ObscuraDay @ExplorersClub: membership immed. if you have stepped foot somewhere no one else has, possible candidacy w/ contrib. to canon

And then, in Switzerland, some bones were examined:

New Jersey, of course, was full of clowns:

Now it feels like Obscura Day has really gotten started—as some tours in different time zones have already happened (Australia began around midnight EST), some are beginning. Like the one in D.C.  with Dupont Underground managing director Braulio Agnese. 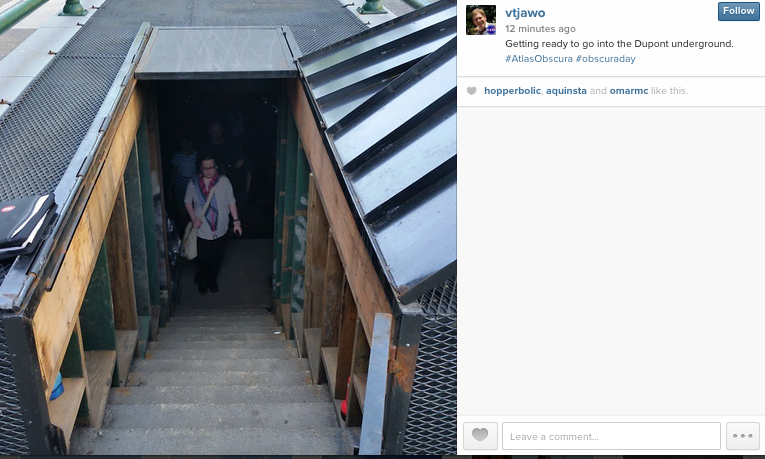 Have just learned via @atlasobscura there is a World Taxidermy Championship. Of course there is. #ObscuraDay2015 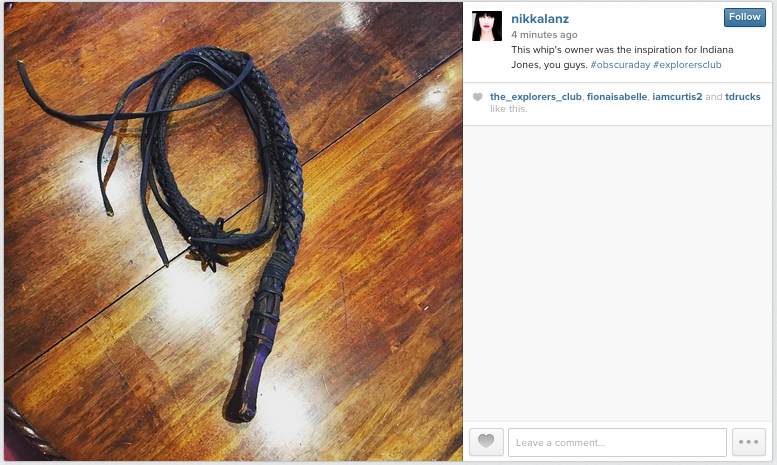 And as I sit in my living room, a real case of FOMO has set in. The Roman catacombs, for instance, look pretty great.

Things are getting pretty real over at New York’s Explorer’s Club.

Meanwhile, over in Oslo, Chris Pettersen and co. are getting to check out the weird death-egg of Emanuel Vigeland in the Vigeland Mausoleum.

Eat your heart out House of Cards! On Obscura Day we actually tour the underbelly of Washington DC!

One of our favorite Muffler Men in all of America is getting some rainy Obscura Day love!

We’ve all learned not to bury anything in a pet cemetery, but touring one is totally fascinating.

Let it never be said the curious of Massachusetts will miss an opportunity to tour a castle.

Our very own Rachel Doyle has discovered the cavernous majesty of the Brooklyn Army Terminal.

This clown found on our private tour of the Morris Museum in New Jersey is making fun of everyone who isn’t there.

Jay Morgan’s enthusiasm for the Capitol Stones pretty much sums up how we feel about the wonders of the world.

Did you know the world’s smallest sovereign nation exists in Nevada? You even have to get your passport stamped!

Our editor-in-chief Reyhan Harmanci visits Pratt’s steam engine room, which has been chugging along for over 90 years.

In the boiler room. Just like My So-Called Life #ObscuraDay pic.twitter.com/emUxIAGb1M

Exactly zero of the intrepid visitors to Boston’s Ether Dome would ever want to have a tumor removed publicly in this 19th-century operating room.

Pretty atmospheric over at this London cemetery.

The bottle art homage to the Virgin of Guadalupe, at Randyland in Los Angeles, is beautiful!

In Brooklyn, Jeanne Hodesh scored a lovely collection of vintage glassware during a tour of Dead Horse Bay. (Due to the bay’s history as a horse-rendering plant and garbage dump, old bottles, shoes, and other fascinating miscellany regularly wash up on shore, to the delight of many a collector.)

How I made it home from Dead Horse Bay w such a modest collection is a wonder in itself @underwaterny @atlasobscura pic.twitter.com/yuuLLz8YGJ

It’s your standard scream-filled Saturday over at Dapper Cadaver in Los Angeles:

Did you know that there are catacombs beneath the streets of Indianapolis? Here’s a peek down one of the atmospheric tunnels:

Matthew Bryan stumbled upon this sinister old tome during an examination of occult books at the Philadelphia Athenaeum:

At the Valley Relics Museum in California, visitors time-traveled to the ’50s via neon signs and classic cars:

Time for the Marionettes! #obscuraday

At Colorado’s Central City Cemetery Complex, these unusual tombstones were part of a scavenger hunt:

Back in Brooklyn, the faithful arrived to worship clanking contraptions at the Robotic Church:

There’s still a portion of Route 66 that’s made out of brick…that’s fabulous.

This is the last portion of Route 66 still made of bricks. #ObscuraDay

As they should be—they had some great views:

Not really sure what’s going on here, but still into it.

Back in New York, it’s time to try some whisky.

Okay, I’m jealous. But it’s also looking like L.A. is having a great time—the Obscura Society out there made a new friend.

Hanging out with BooBoo, the new mascot of the LA Obscura Society #ObscuraDay

Obscura Day adventurers in L.A. also hung out with some excellent puppets.

No big deal, just a working nuclear reactor in Portland.

Nuclear Reactor tour at Reed College in Portland. Part of Obscura Day Celebration. This was the only part we could photograph.

Obscura Day gets the official seal of approval from the Fonz!

This guy won the staring contest at Portland’s Pecularium — he looks nice, but think twice before you look him in the eye with a glint of a challenge.

It’s been a loooong day (and still going strong on the West Coast!). Obscura Day celebrants visited an abandoned zoo, underground tunnels, and a working nuclear reactor; they drank whiskey, hiked up mountains, stared each other down, and explored some wonderful and strange bits of the world. Great day or greatest day?

hey from cozy dog drive in, in springfield, where the corndog as we know it was first served, off what was route 66. #ObscuraDay @leahrapkuhn

*Update, 5/31: An earlier version included the wrong name of the leader of the D.C. Dupont event.

FOUND: A Gun Linked to 7 Murders Was Sitting in a British Museum