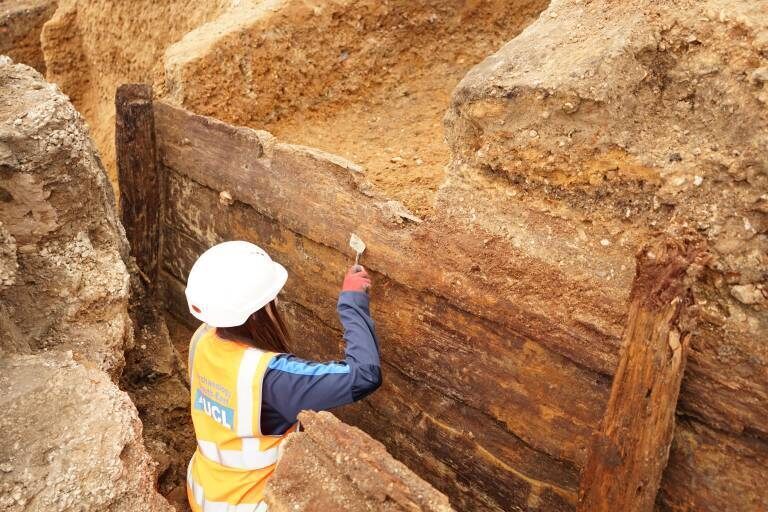 Archaeologists think the timber structure could be the remains of gallery seats. UCL/Archaeology South-East
In This Story
Destination Guide

If you found yourself in 16th-century London with a bit of spare money and free time, you might have wedged yourself into an inn or a playhouse to see a performance. The space may have been a square, circle, or polygon, and it might have had a roof—thatched or tiled, and perhaps celestial in design, splashed with blue and spangled with stars. It might even have a trap door or two—one to welcome gods and goddesses to Earth, another to plunge sinners to Hell, says Farah Karim-Cooper, head of higher education and research at Shakespeare’s Globe and professor of Shakespeare studies at King’s College London. You might have encountered free-flowing beer, or handfuls of gingerbread, hazelnuts, or stone fruits. You would have stood shoulder to shoulder with fellow artisans, tourists, ambassadors, immigrants, students, and others who danced, sang, and clapped along with trumpets and lutes, and occasionally pelted the curtain with apples to urge the show along.

Centuries after the curtain fell on these shows and their players, historians and archaeologists are still learning about the performances and the spaces that hosted them. A team in London believes that they have recently excavated the earliest Elizabethan playhouse, dating to 1567.

What little is known about this place, called the Red Lion, mainly comes from two lawsuits brought against the proprietor, John Brayne, by grumbling carpenters. One from 1567 references timber scaffolding, while another, two years later, mentions an outdoor stage, and even includes its dimensions. Historic maps and land deeds suggested that the playhouse was probably somewhere around Whitechapel. When staff from UCL Archaeology South-East—the commercial arm of the Institute of Archaeology at University College London—recently excavated 85 Stepney Way there, in advance of a housing development project, they found what they believe to be proof of the playhouse, which was likely incorporated into an old farmstead or inn.

The crew uncovered the remains of a timber structure with dimensions that line up neatly with the ones in old lawsuits, plus postholes they suspect might be evidence of long-gone gallery seats. They also revealed several brick cellars, which they propose might have once kept beer cool—and they found several mugs, bottles, and glasses that attest to imbibing on a large scale. “The strength of the combined evidence—archaeological remains of buildings, in the right location, of the right period—seem to match up with characteristics of the playhouse recorded in early documents,” said Stephen White, who directed the excavation, in a release.

If this discovery is indeed of the Red Lion, it might lead experts to revise their picture of how theaters looked at the time, says Tiffany Stern, a professor of Shakespeare and early modern drama at the University of Birmingham’s Shakespeare Institute. Until now, researchers have thought that stages of the period were flanked by galleries, and were typically “thrust,” that is, they extended out into a crowd of groundlings (audience members who filled the open space known as a “yard” or “pit”). Based on the archaeological evidence, this space doesn’t look quite like that. “As the Red Lion—if that is what it is—seems to have had a stage that is quite shallow, not as thrust as we might expect, and seems only to have had one gallery, we could argue that we should rethink our sense of basic theater characteristics—or, alternatively, that we should see this as an early attempt that didn’t fully work, and that paved the way for the later theaters,” Stern writes in an email. “I’m inclined to say that.”

Many scholars have historically distinguished between purpose-built performance spaces and spots that troupes fleetingly called home, but recent excavations—including this one—offer a more subtle distinction. “We used to think that there was a bright line between existing spaces that were temporarily taken over for performances, like city halls, town squares, innyards, or dining areas in great houses or colleges, and spaces built especially for performances,” says William West, co-editor of Renaissance Drama and a professor of English at Northwestern University. “The Red Lion is probably a good example of these gray areas, since it seems likely to have been some sort of existing building or complex of buildings adapted to putting on plays by constructing seating, a stage, or both.

“We know that some plays were performed without stages, and that there were moveable stages that might not leave a clear archaeological record,” West adds. (Though, at the same time, he says, excavations at the Rose theater revealed wear patterns on the ground near the site of the stage, which locates it pretty firmly.) To West, remnants of a stage or seating, including postholes, are persuasive evidence of the presence of a performance space, as are pieces of the ceramic boxes where viewers dropped coins upon entry. At the Red Lion, in particular, Stern hopes to turn up evidence of trap doors and a turret, which the structure is known to have had. “I’d love there to be leftovers from ascents or descents, or some props (things to make thunder, birdsong, etc.),” Stern says, “as these would help us understand better the mechanics of the stage.”

Though the UCL team says they’re “pretty convinced that we’ve found the Red Lion,” they’re not quite positive, and haven’t found the trove Stern was hoping for. The artifacts are back at the lab for study. This particular story will continue to unfold, one act at a time.

Why Are NYPD Cruisers Playing the Ice Cream Truck Jingle?

They were found in the Yanghai Tombs in modern-day Northern China.
architecture

The site reflects how the rise of Christianity to the south affected the worship of the Norse pantheon.
museums

What Will Mexico City Do With 2,000 Mammoth Bones?

The fate of an enormous trove of fossils hangs in the balance.
shipwrecks

This slave trade is well known to historians, but this is the first known wreck from it.
Video • AO Docs

To devoted collectors, the humble building materials are full of stories—and well worth stockpiling.
Read more
Thanks for sharing!