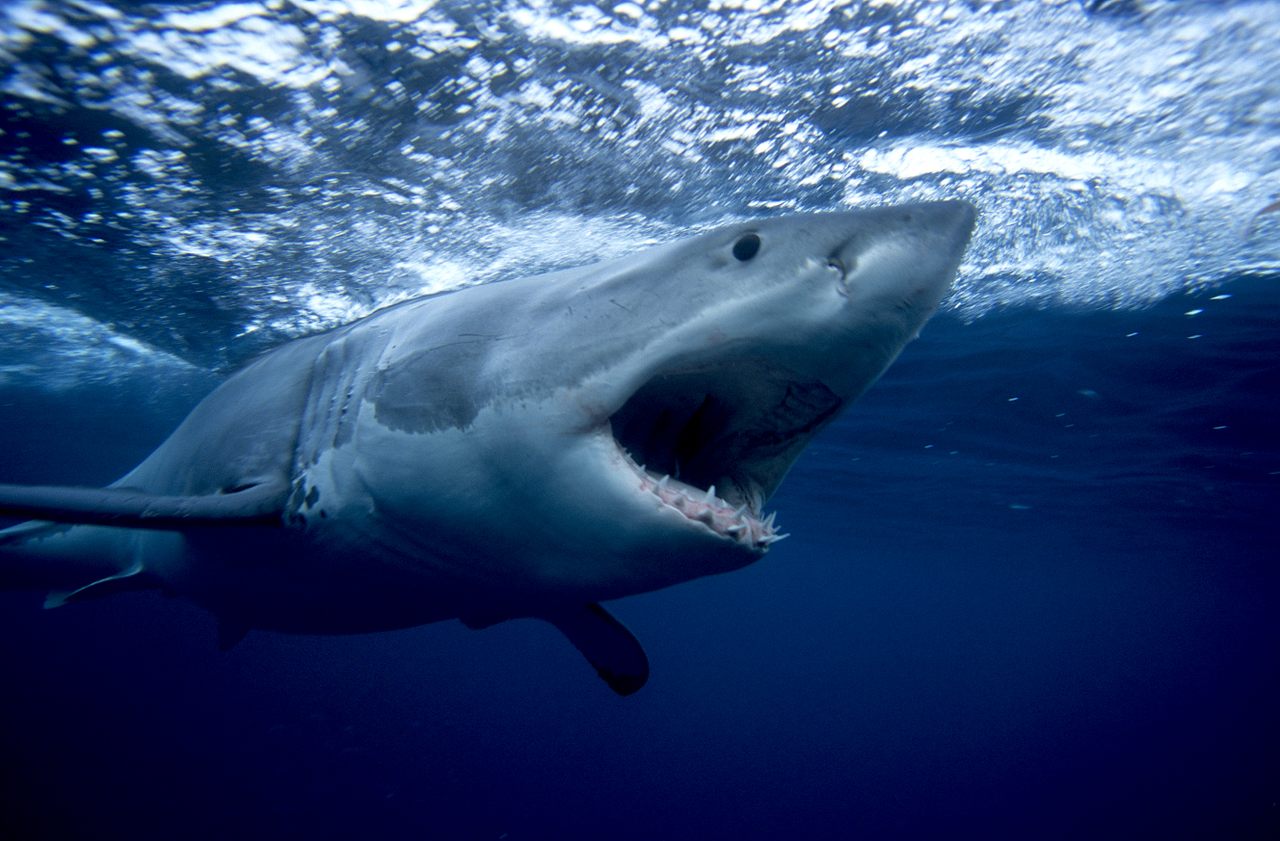 Shark attacks are very rare, making the discovery of an ancient one a particularly unusual occurrence. Getty/Gerard Soury
In This Story
Destination Guide

In Okayama Prefecture, near the coast of the Seto Inland Sea, which sits between three of Japan’s islands, is a shell-mound cemetery called Tsukumo. There, preserved in layers of soil and shells, archaeologists had uncovered the remains of more than 170 prehistoric Japanese fisher-hunter-gatherers dating to more than 3,000 years ago. Among them was the remains of a man, designated No. 24, that had scientists baffled.

No. 24 was missing his right leg and left hand. His bones were covered in lacerations, scratches, and gouges. J. Alyssa White, an archaeologist at the University of Oxford, was bewildered by the sheer number of injuries he appeared to have sustained. “We were like, ‘There’s another one, and another one, and another one,’” she says of her first examination of the remains, which had originally been excavated around 1920 by Japanese archaeologist Kenji Kiyono.

White and her team initially thought they had found an example of the phenomenon known as “overkill,” when remains are ritually altered, such as a body shot full of arrows after death. But no human-wielded weapon seemed to fit the bill. “We were just quite flummoxed and perplexed,” she says.

Radiocarbon dating placed No. 24 somewhere between 1370 to 1010 B.C., during the late Jomon Period, when sea level was higher than today and Tsukumo was closer to the shore, says Masato Nakatsukasa, an anthropologist at Kyoto University and coauthor of a study of the remains, recently published in the Journal of Archeological Science: Reports. It would have been a great place for a settlement. “Land mammals such as deer, boars, rabbits were abundant, and this area was dominated by broadleaf evergreen forests,” he says.

White and her team continued examining the remains in ever greater detail, but still couldn’t pin down a cause for the skeletal damage, or a cause of death. “I just kept on getting more and more confused,” she says. She corresponded with her supervisor and colleagues, and slowly but surely went through a process of elimination. The wounds looked like injuries that could be caused by metal weapons, but the people of Japan hadn’t used those at that time. The late Jomon people had hunting weapons made of stone. None of No. 24’s lesions matched that kind of weapon, and there were no other marks to hint at another cause of death. So they ruled out human conflict.

White and her colleagues then thought that a terrestrial carnivore may have killed or scavenged the remains of No. 24, but there aren’t many large, predatory mammals on the Japanese archipelago (just bears, really, but the injuries didn’t resemble a bear attack). Plus, microscopic analysis showed that whatever had damaged the bones was serrated. That took land predators off the list of suspects.

Isotope analysis on the remains revealed that No. 24 was a seafood eater. It’s known that the Jomon people were fishers, and even wore shark teeth or vertebrae as accessories. No. 24 probably fished or went diving in the Seto Inland Sea regularly, as modern inhabitants of the area still do.

Working off of a hunch that the culprit might be in the sea, the team reached out to George Burgess, director emeritus of the Florida Program for Shark Research at the Florida Museum of Natural History. “They sent me wonderful pictures of a variety of elements of the body and I immediately could see that, yes, these were absolutely shark bites, very much similar to what we see in modern victims,” says Burgess, who has reviewed thousands of shark attack cases around the world, and helped pin down the oldest known shark attack in the Americas.

Using data such as theoretical water temperatures at the time, current distribution of shark species, and possible animal size based on the bites, Burgess deduced two possible candidates for the attack: the tiger shark and the great white shark.

If Kazuhiro Nakaya had to bet, he’d put his money on a great white. Nakaya is a marine biologist at Hokkaido University who has studied the sharks of Japan extensively. While tiger sharks are not unheard of in the Seto Inland Sea, he says, historically they’ve been much more common toward the southwestern tip of the Japanese archipelago. Seto is great white territory. The last several shark attacks in the area, in the 1990s, were all by great white sharks.

A culprit appears to be found, but there are still unanswered questions. For someone who was attacked by a shark, No. 24’s bones are surprisingly intact. Based on the bite patterns, Nakaya thinks that the shark must have been around 10 feet long, and a shark that big is likely to have broken bones. “There are so many scars, and the body parts are very complete,” he says. “So I wonder, if one huge shark attacked him, why are his other parts not also broken severely? I cannot understand that.”

White guesses that it’s a sign that No. 24 spent just enough time in the water for the shark to get in a lot of bites, but then was promptly pulled out. If his body was retrieved and then buried in the shell mound fairly quickly, it might explain why the bones remained more intact and were so well preserved.

If the culprit seems apparent in retrospect, it’s important to remember just how astonishingly rare evidence of an ancient shark attack like this is—the odds are stacked against you at every step. There are very, very few shark attacks a year across the globe, and there were a lot fewer people in the water back then. Given just how much damage No. 24 sustained—the research team counted at least 790 lesions, visible in a 3D model the team created—the chances that his body wasn’t consumed entirely and was retrieved more or less intact seem rather low. Then, White adds, the soil in the region destroys most burials. It was only because he was buried in a shell mound that his bones were preserved for 3,000 years. Lastly, says White, what are the odds that archaeologists would find and excavate those remains at all?

How to Make Sense of a Mass Grave

A fascinating case study from the Thirty Years' War.
cemeteries

When a Philadelphia construction company dug up an old cemetery, local archaeologists stepped in to help—because there was no one else.
monkeys

Putting the wild in wildlife.
science

Researchers use art and ancient bones to make the case for modern lions once freely roaming Southeastern Europe.
Video • Wonder From Home

8:51
Want to see fewer ads? Become a Member.
From Around the Web
Atlas Obscura Trips
Artisans & Exiles: Exploring the Hidden Traditions of Japan’s Sado Island
View This Trip
Thanks for sharing!