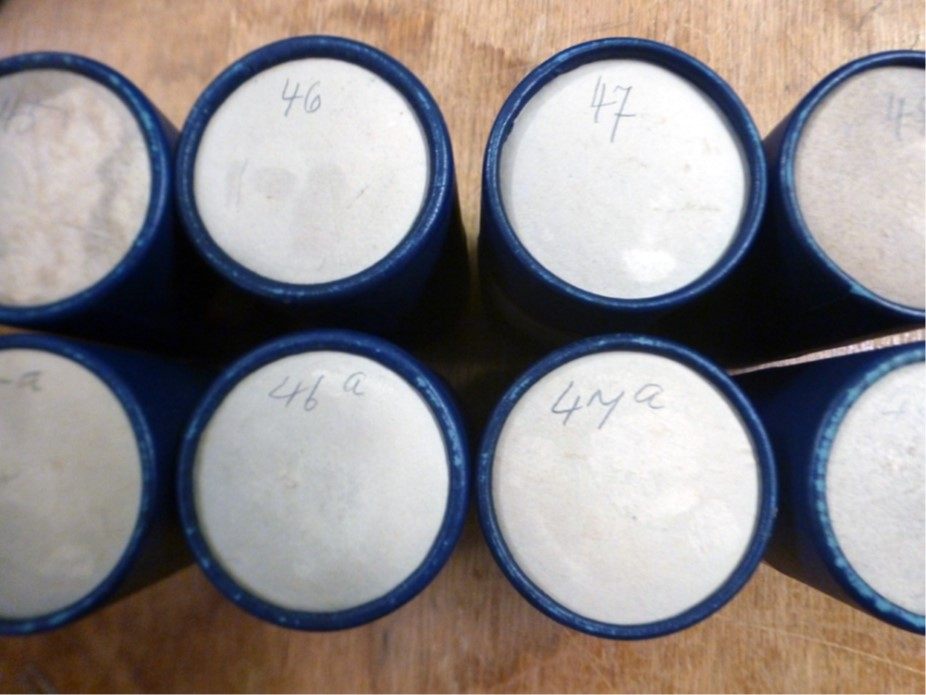 Berthold Laufer's cylinders: one row for vocals, the other for instruments. Courtesy Patrick Feaster
In This Story
Destination Guide

In the summer of 1901, the German anthropologist Berthold Laufer departed for China, having been assigned by the American Museum of Natural History (AMNH) to gather cultural items for the museum’s collections. In 1904, he returned to the United States with the kinds of items one expects museums to collect, such as shadow puppets, manuscripts, and pottery. But he also came back with what might have been a historic first, and an accidental one at that: stereo recordings, which preserved vocals and instruments from the same opera in separate channels of audio.

“If you’re coming at this from the standpoint of being a sound recording historian, this has always been a kind of a holy grail, to find pairs of cylinders recorded at the same time,” says Patrick Feaster, of Indiana University’s Media Digitization and Preservation Initiative. Before these 1901 recordings were found to fit the bill, Feaster believed that the oldest known stereo recording had been captured more than 25 years later.

To be clear, Laufer’s recordings themselves are not recent discoveries. They have been known to exist since they were brought back from China. Of the 503 cylinders he compiled during his travels, 103 are held at Berlin’s Phonogramm-Archiv, and the other 400 at Indiana University’s Archives of Traditional Music. (They’re still technically owned by the AMNH.) Only recently, however, did researchers there happen upon the stereophonic secrets lurking among some of the cylinders.

Reading letters that Laufer sent from the field to famed anthropologist Franz Boas, the archive’s director Alan Burdette came upon a surprising detail. In a September 27, 1901, letter to Boas—who was, at the time, AMNH’s curator of anthropology—Laufer described recording a Chinese opera by using “two machines which were working at the same time, one for the orchestral music, the other one for the vocal music, so that two cylinders are corresponding to each other.” Laufer also explained his numbering system for the recordings: “The songs bear the numbers 28–52, the corresponding instrumental music = 28a–52a. The orchestra,” he added, in case Boas was curious, “consisted of 4 instruments, a guitar, fiddle, a drum and castanets. I had a double funnel, so that all instruments could easily go in, two from each side.”

It’s the kind of thing that can hide in plain sight for more than a century. “I don’t know that a lot of people have read these letters,” says Feaster. “You’d have to really go out of your way to read them—but, if you read those letters and read what Laufer was trying to do, the idea of trying to recombine them in stereo might occur to you. It occurred to Alan [Burdette],” who told Feaster about the letter in September 2019. They both immediately understood its importance. Again, says Feaster, “If you’re coming at this from an audio historian’s standpoint, you read something like that and you say, ‘Wow, this could be the one.’” After writing some new code just for the archaic cylinders, Feaster digitized the recordings in a manner that recreated their stereophonic effect.

In a blog post, Feaster explains that Laufer didn’t record the opera in this way simply to sit back, close his eyes, and enjoy the sophisticated playback. In fact, it was primarily a clever way to make Laufer’s transcribing job easier: With audio coming from separate channels, both the instruments and vocals would be clearer and more friendly to an anthropologist tasked with notating them. Feaster adds that Laufer was highly successful in spacing the two channels far apart from one another, the distance giving each channel increased clarity. From the standpoint of an audio researcher, it’s golden, though opera fans may wish to avoid the recording, as “there isn’t much sound in the center, shared by both channels,” writes Feaster. In other words, the mixing is useful and historic, but it doesn’t exactly sound natural to modern ears that are accustomed to stereo audio and higher fidelity.

Atlas Obscura · Recording made by Berthold Laufer in 1901.

The recording contains one particular detail that, above all, summarizes just how much Laufer was able to do with so little. If you listen closely to the sample, Feaster points out, “when the cylinder of the vocal phonograph runs out in mid-performance, there’s a shout in the background of the instrumental cylinder—probably Laufer signaling the musicians to stop.” Buried beneath static and 119 years of technological change, that shout takes on added meaning: a living record of the challenge of making living records.

Why Do Marine Animals Love Gobbling Up Gelatinous Jellyfish?

Staff are hopeful after the first recovery effort found 150 boxes in a salvageable state.
wwi

A new exhibit reveals the wondrous sights service members found away from the trenches.
vampires

The Rosenbach museum is home to Bram Stoker’s original notes on vampires and a growing collection of undead literature.
museums

From an Avenue of Fascism, to turtle soup, to a phantom photo of three important women having tea.
Video • AO Docs

06:59
Sponsored by Visit Seattle
Want to see fewer ads? Become a Member.
From Around the Web
Atlas Obscura Trips
China: The Great Cuisines of the Middle Kingdom
View This Trip
Thanks for sharing!