On Tour with the War on Drugs: Dummies are Everywhere - Atlas Obscura

A museum that houses the world's largest collection of ventriloquism dummies.

I try to blend in. (All photos by Jon Natchez and used by written permission from Vent Haven Museum, Inc.)

For the next few weeks, The War on Drugs’ Jon Natchez is going to be sharing his adventures on a current tour. Like any touring musician, Natchez experiences a very specific form of travel, the kind where you usually have 24 hours, tops, to explore a new city. This is the third installment in his Atlas Obscura tour diary; read the first one here, second here.

10:30 a.m., Covington, Kentucky: I get on my bike and bike through sleepy Covington, Kentucky, past old German neighborhoods and goetta factories, heading towards an expedition I’m doubly excited for. I’m eager to see both the place itself—The Vent Haven Museum, the world’s only ventriloquism museum—and the local whom I’ve roped into coming with me: my buddy Bryan Devendorf. Bryan is best known as the drummer of The National. (Side note: Bryan is the kind of non-self-promoting musician who doesn’t have the big-name fame of some other drummers, but whom I’ve found is universally and deservedly worshipped by other musicians. The way his drum parts work within songs are just brilliant and central to the band’s sound. He also has an excellent new project called Pfarmers that you should check out.) Bryan and I both lived in New York City for a long time and while we’ve only played a very little bit of music together. we’ve known each other for awhile and I’ve always really enjoyed hanging with him.

But between tours and now living in separate cities, opportunities to do so are few and far between. One of the upsides of touring, however, is that I often find myself in cities that I otherwise probably wouldn’t visit where friends live. And sometimes those friends are excited to go to a ventriloquism museum with me.

Two of the many heads on display. I feel a certain affinity for Old Man Grump.

At this point, I should answer the obvious question: a ventriloquism museum?! Seriously?! That was the question that my bandmates were asking, accompanied by a lot of eye-rolling. Granted, it does sound like a) the ultimate hipster/ironic excursion; b) a potentially very creepy place. And I’ll admit, the first time I went—yes, I’ve visited before—part of the appeal was its strangeness/novelty. I’d be lying if I said a part of me hadn’t been giving a self-satisfied chuckle at the whole idea.

Bryan tries to blend in.

But once there, anyone would be captivated by the intrinsically engrossing nature of the place. The history of show business is just generally fascinating, particularly the unusual, less famous niches within that history. And this museum is like a phenomenal chapter in a Ricky Jay book: a thorough and loving catalog of an entertainment tradition that has persisted for decades, even centuries, passed along from one generation of practitioners to another largely outside of any mainstream popularity. It’s totally absorbing. And, I’m not gonna lie, also a little creepy. But that’s fun too. Definitely worthy of a return visit.

The museum grew out of the collection of W.S. Berger, an amateur ventriloquist and devoted fan of the genre (The “W.S.” stands for “William Shakespeare,” which is immaterial but great). Born in 1878, he amassed a huge collection of ventriloquist dummies and ventriloquism memorabilia over the course of the 20th century. Towards the end of his life (he died in 1973)he set up the collection as a charitable foundation/museum, and today it exists in three outbuildings behind what was his house, in suburban Kentucky outside Cincinnati. He established an interesting system to ensure that his vision for the museum would endure after his death. The curator, in exchange for taking care of the collection and giving tours, gets to live in his beautiful Victorian house for free, with one condition: the curator could not be a ventriloquist him/herself. Berger didn’t want the curator to simply perform an act for visitors with other ventriloquist’s dummies, and as a result the curator talks about the history and culture without descending into shtick.

The tour itself goes through all three small buildings, each with its own perspective on the history and craft of ventriloquism. Lisa, the current (and wonderful) curator told dozens of fascinating stories—about Johnny Carson’s beginnings as a ventriloquist; about Lydia Dreams, a British cross-dressing ventriloquist from the vaudeville era; about Monsieur Brunard, whose Andy Kaufman-esque act consisted of endless soliloquizing in a pretentious French accent while his dummy sat mute beside him until the act was nearly over, at which point the dummy would interrupt and curse him out in Brooklynese. As the tour goes on, you realize that behind every one of the hundreds of dummies was a devoted performer, committed to this peculiar and arcane form of entertainment, trying to carve out his or her own career in this tiny nook of show business.

Bryan attempts to strike a casual pose upon entering Vent Haven for the first time.

Bryan is a fantastic asker of questions, and through some of the things he noticed and asked about, we got to hear about aspects of the collection that might not have made it into the tour. For example, he saw that, among all the photos of ventriloquists in the first building, there was one section consisting of pictures of dozens of female—and only female—ventriloquists. He asked why all the women were grouped together, and Lisa pointed out that it’s a vestige of the way W.S. Berger first organized the collection in the 1930s. As a man who grew up in the South in the late 19th and early 20th century, he thought it was appropriate to segregate the entire collection: white dummies on one side of the room, non-white dummies on the other, male and female figures also kept apart. Lisa showed us a picture of the collection from its early days, and it’s a striking reminder how pervasive and ingrained (and casual) that racist and sexist ordering of the world was. (To Berger’s credit, at least in Lisa’s telling, in the late 1940s, John W. Cooper, an African-American ventriloquist and friend of Berger’s, had a series of conversations about how offensive that arrangement was, and Berger came around and desegregated his collection long before desegregation came to the South.) 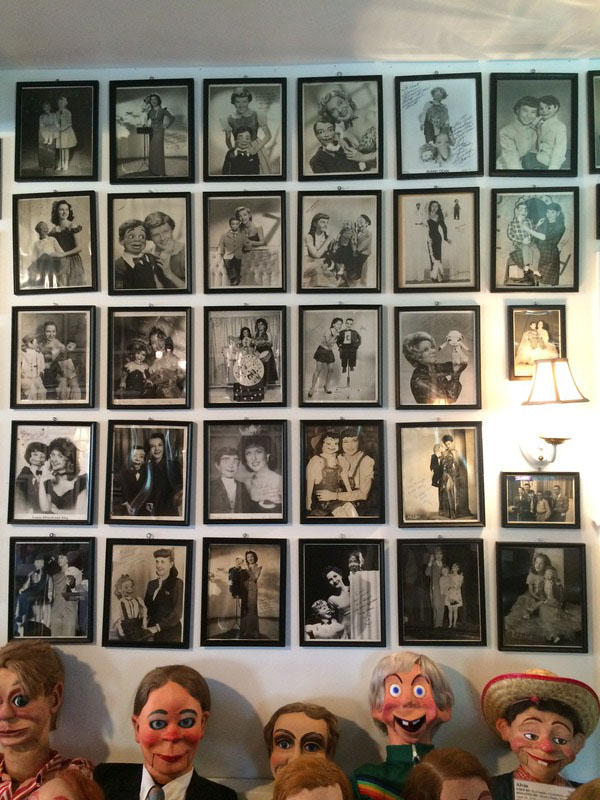 When you walk into a room and find hundreds of lifeless, unblinking eyes staring at you, you feel something shift in your gut. It’s a visceral feeling, and it’s not as simple as “ooooo creepy!” Lisa mentioned that, curating the museum, she has thought a lot about the idea of staring and has come to the conclusion that, in human interaction, staring only occurs in three situations: as an act of intimacy, as an act of aggression, or as the behavior of a crazy person. She’s on to something; having all those motionless eyes bore into you reflexively quickens your pulse and heightens your awareness, an almost biological reaction to a situation where the stakes have been raised.

(Lisa was also adamant that, until a handful of movies and TV shows cast the ventriloquist dummy as a sinister evil-doer, no one ever thought of dummies as creepy. I got the sense that this is the party line among ventriloquists and ventriloquism fans. But I call bullshit. There is something undeniably, fundamentally unsettling about the dead-eyed stare of a dummy. Even Lisa conceded that there’s an uncanny valley thing going on.)

An old chart of pronunciation and breathing exercises for ventriloquists.

12:30 p.m.: Bryan gives me a ride back to the venue, which is the Madison Theater, a former movie theater that has been repurposed as a music venue. There’s a lot of teal paint and chrome and Plexiglas. Our (brilliant) front-of-house engineer Steve Revitte nails the vibe: “It feels like an ‘80s Miami strip club”. After a quick set-up, I venture out with Bryan for some lunch. He takes me across the Ohio River over the John Roebling Bridge, a gorgeous suspension bridge that was a forerunner to the Brooklyn Bridge Roebling designed 30 years after building this one.

We eat in Over-the-Rhine, a beautiful historical neighborhood of the city. Bryan, a Cincinnati native, gives me a quick drive-thru tour—the area is the historic center of Cincinnati’s German-American community and contains the largest amount of intact Italianate architecture in the country. Over a lunch of some excellent pho—for some reason, I always crave broth-y things on tour—we talk about how touring has changed over the years. We come to the (fairly obvious) conclusion that modern musicians are pretty damn prissy. Bryan has been doing a bunch of playing with Bob Weir, guitarist from the Grateful Dead, and we talk about how those guys and that generation used to tour: the Dead’s rider in the 70s was handwritten and consisted of “12 pack of beer, 12 pack of Coke, sandwiches.” Modern band riders are legendary for their length and specificity (though I don’t fault anyone for trying to maintain some degree of comfort and sanity while on the road, and a satisfying rider goes a long way towards that.)

In general, the culture of touring is completely different than it once was. Bryan mentions a line in Phil Lesh’s autobiography that has always stuck with him, in which Lesh mentions that he was “drunk in 1978.” Like, for the whole year. Though I’ve been in bands with people who had substance abuse problems, drugs and booze are not the central part of the touring experience that they once were. Diversions tend to be much more bourgie. These days, for example, coffee obsession is the fad running rampant through the touring world. There was a time when, upon arriving in a new town, everyone would scramble to find the drugs they needed; now, folks will sprint off the bus to find a cup of single-origin pourover. This trend is obviously for the better—touring professionals are undoubtedly healthier and happier today—but I wonder what it would have been like to tour during a wilder, more unbridled era. My tour stories would undoubtedly be crazier.

But who am I to talk. I just spent the morning at a ventriloquism museum. Not exactly Chateau Marmont in the 70s.

Support Us
Keep Exploring
on tour

On Tour with the War on Drugs: Pinball Paradise in Pittsburgh, PA

On Tour with The War on Drugs: Rochester's Church of Gear

On Tour With The War On Drugs: Macon, Georgia