To Fix a California Dam, Engineers Are Putting a Giant Scale Model to the Test - Atlas Obscura
Want to see fewer ads? Become a Member. 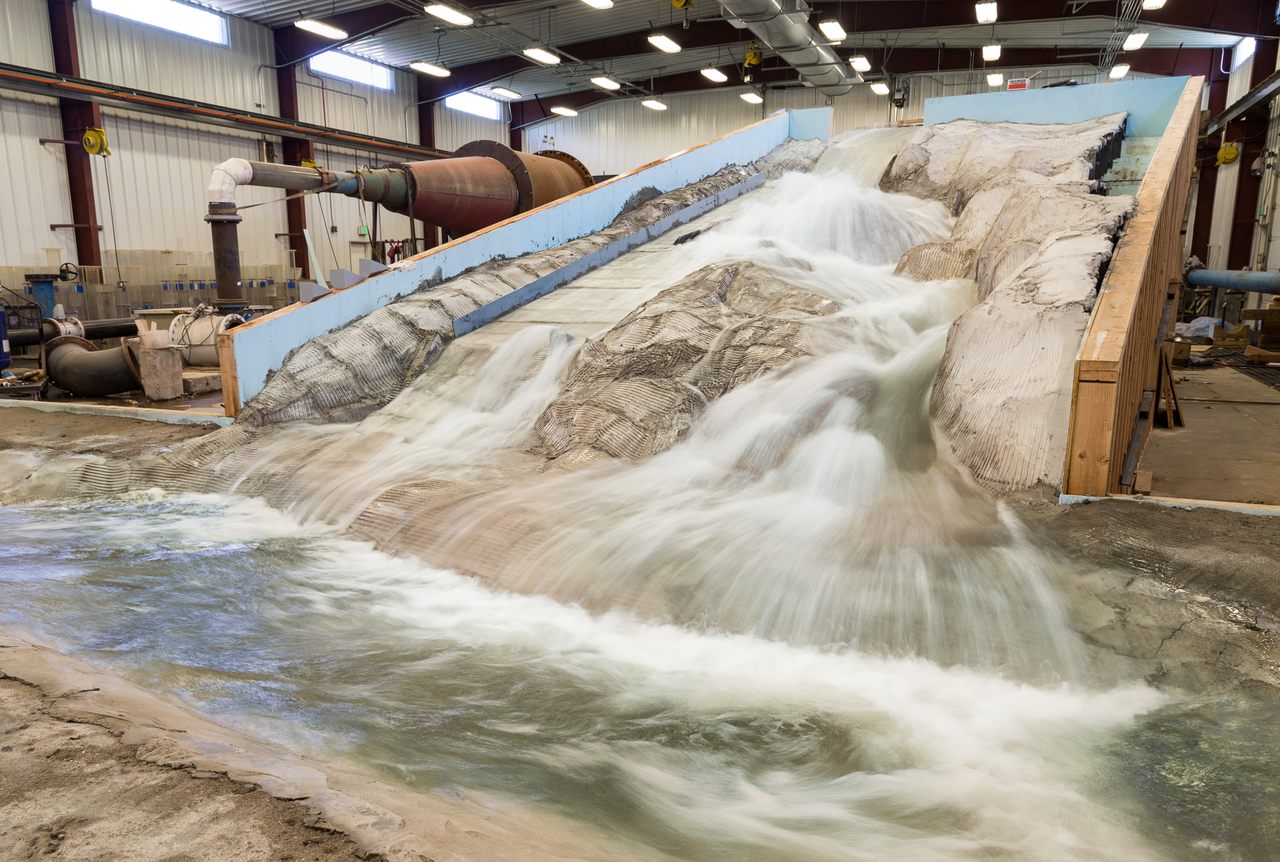 The model is an exact, scale replica of the damaged spillway. Courtesy Utah State University

It was a Sunday evening in February when residents of three counties in Northern California were ordered to evacuate their homes in the Feather River Basin. After heavy rainstorms doused the region, the Oroville Reservoir was at capacity, and excess water was sent out over the primary spillway and down the Feather River. Soon, dam operators with the California Department of Water Resources (DWR) noticed a crater had formed in the spillway. The Oroville Dam, the tallest in the United States at 770 feet, was stable, but the spillway was an important part of the reservoir’s flood control system. Soon, the bottom half of the concrete chute had crumbled, sending debris into the river and forcing the DWR to use another, emergency spillway for the first time. But the massive flows eroded that earthen path as well. If the erosion had continued and undermined the concrete lip of the spillway, a massive flood would have swept down the river into the valley below—a 30-foot wave of destruction.

So 188,000 people evacuated the valley. Fortunately, the hillside and spillways held, and towns such as Oroville and Thermalito were spared. Now DWR is fast-tracking repairs to the new spillway so at least two-thirds of it will be complete by November 2017, when the winter storm season starts. But officials want to make sure they get it right, so they’ve turned to scientists for help. A Utah State University team was called in—and proceeded to build a massive model of the spillway, 1/50 the size of the original.

The Utah Water Research Laboratory at Utah State University has been building models like this since 1965. “Over the years, we’ve built dozens and dozens of scale models of dams and their associated spillways,” says Michael Johnson, one of the chief engineers there. Sometimes those scale models are replicas of intact dams, and sometimes they’re designed to replicate a failure, such as the one at Oroville. “Sometimes we get called in before a structure’s built, which is the ideal. People can understand what to expect with their design, or maybe make design refinements.” The models allow Johnson and his team to test new designs and identify potential problems with existing designs. “The model tells us very quickly if there’s something that needs to be looked at a little closer.”

The models are made from wood, acrylic, mortar, and steel, based on construction drawings and, in the case of Oroville, laser scanning data from the damaged spillway. A team of 15 people spent 40 days building the spillway model, which is one of the largest in the lab’s history. Once built, the team tests its strength under different scenarios. About 150,000 gallons of water are recirculated through a pump system that can simulate what’s known as the “probable maximum flood”—essentially the biggest flood the spillway could ever experience, under the most extreme conditions. Probably, the probable maximum flood will never happen, but it’s not impossible. It’s a worst-case scenario that the new spillway must be designed to manage. Oroville’s old and new spillways, and the gate system that regulates the flow of water, have been designed to withstand a probable maximum flood of water flowing at a rate of about 300,000 cubic feet per second, or three times the average flow over Niagara Falls. “With our model,” says Johnson, “we’ve demonstrated the gate structure has the capacity to pass that.” The models also allow Johnson’s team to test new technologies that can improve dam safety, such as aerators, which mix air into the water to prevent various, surprisingly strong forces that appear in masses of flowing water.

Investigators still aren’t exactly sure what caused the spillway to fail in February. Johnson’s team is only looking at potential repairs, so a separate team of independent investigators has been appointed by DWR. A preliminary report suggests that insufficient drainage, corrosion on rebar, and variability in the spillway’s concrete are potential contributors to the problems. The final report is expected this fall, around the time the first repairs wrap up.

“Everything so far that has been proposed has performed very well,” says Johnson. That’s good news for the engineers and construction teams who are rushing to complete the new $275 million spillway. “It’s such an important component of the infrastructure in California.” Water that passes through the Oroville Dam and spillway irrigates crops in some of the most productive farmland in the country, and provides drinking water to parched Southern California. Johnson says that’s why it’s so important repairs are done right. “It’s a pretty critical piece of infrastructure to the whole country, really.”

Digging into the science of three cities' sewer-clogging blobs.
science

How to Create an Interstellar Network of Planets

Could a megastructure help us start a conversation with an alien civilization?
floods

The Wood screw pumps are mechanical marvels, but the turbines that power them are another story.
Video