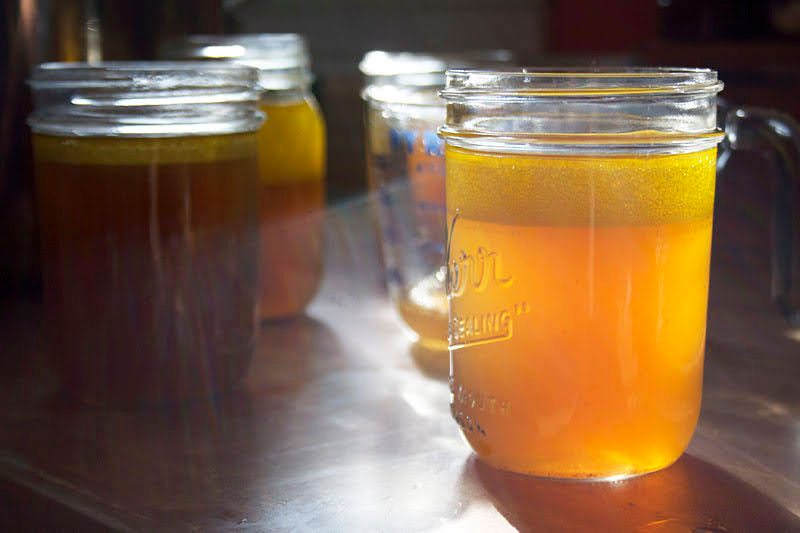 Perrotte’s perpetual broth, shown in her kitchen circa 2012. Courtesy Magdalena Perrotte
In This Story
Place

At a Bangkok bistro, one pot of beef stew has been cooking non-stop for more than 45 years.
Destination Guide

When Magdalena Perrotte arrived in the U.S. from France in 1982, she had a secret stashed in her purse—a large jar, filled with a precious golden liquid. “I had it carefully wrapped in a scarf, as well as some raw milk cheeses and cured saucisson—French ingredients you couldn’t buy in Florida,” Perotte, a former owner of Orlando institution Le Coq au Vin, recalls. “I became an expert at hiding food from customs officials.”

Four decades later, Perrotte still uses the same smuggled broth in her cooking. She boasts that this magical elixir, lovingly concocted by her mother in her Normandy kitchen, “is older than Taylor Swift.”

“It just keeps giving, adding depth and richness to my cooking,” Perrotte says. Sherry makers use old sherry to add character to newer wines, and Perrotte has extended her broth’s lifespan over the years in a similar manner. “Once you achieve a certain magic in the pot, you keep it going by adding a little water, a little stock, some aromatic vegetables, herbs and spices,” she says. “My mother’s bouillon de Normandie is my secret weapon, but its taste would probably be unfamiliar to her now, because I’ve infused some Caribbean flavors over the decades.”

When Perrotte makes her famous pot-au-feu (“pot on fire” or hot pot) for guests, does she tell them they’re eating a broth that is almost middle-aged? “Of course not. Americans can be so naive about cuisine. They would refuse to eat it. So I tell them after,” she admits with a laugh.

Pot-au-feu—also known as perpetual stew, forever soup, hunter’s pot, bottomless broth, master stock, or mother broth—is a culinary tradition that is practiced around the world. Food historians zero into two global regions for the origins of soups simmered for years or even decades. The first is China, and more specifically in the cuisines of Canton and Fujian, where there’s a rich tradition of making lou mei, or master stock, which is used to braise and poach meats. These master stocks are never discarded. They’re handed down from one generation to the next, with some lasting several centuries.

The other likely source for this technique is France, where decades-old soups like Perrotte’s have been satiating hungry peasants since time immemorial. “It’s classic poor people food,” says British food historian Annie Gray. “That may be why there’s still a stigma attached to it.”

Pot-au-feu is peppered in medieval texts as being popular in the dining rooms of European inns. British food historian Reay Tannahill described this culinary practice in her book Food in History: “Bread, water or ale, and a companaticum (‘that which goes with the bread’) from the cauldron, that provided an ever-changing broth enriched daily with whatever was available. The cauldron was rarely emptied except in preparation for the meatless weeks of Lent, so that while a hare, hen, or pigeon would give it a fine, meaty flavor, the taste of salted pork or cabbage would linger for days, even weeks.”

She also describes rumors about long-simmering pots in France, such as one particular batch in Normandy that simmered constantly for over 300 years, while an even older pot, in Perpignan, had been bubbling since the 1400s until it finally met its demise in 1945 during World War II bombing raids.

On the other side of the world, a star of perpetual cuisine lives in a cauldron at Wattana Panich, a multi-generational family owned restaurant in Bangkok’s Ekkamai neighborhood. Most customers come for the restaurant’s rich beef noodle soup, made with stewed and raw beef, tripe, meatballs, organs, and spices. But the most important ingredient is the broth, which has been simmering for over 45 years. At the end of business each day, third-generation chef Nattapong Kaweenuntawong, assisted by his wife and mother, carefully strains and stores it to be used as the base for the next day’s batch of soup. Its flavor is said to have an almost ethereal depth and richness.

Another famous batch of soup lives at Otafuku, a restaurant located in Tokyo’s historic Asakusa quarter. This broth has been reheated every day since 1945, with cooks adding more water to it as it evaporates. The broth is the base of their oden, a traditional Japanese stew that can contain all sorts of ingredients, from eggs, tofu, and vegetables to shark meat, beef, fish balls, and whale tongue. The broth would be going on 100 today, but the previous batch was lost in 1945 during World War II bombing.

Perpetual broths are still being created today. Chef David Santos, who made his name cooking Portuguese-influenced cuisine at Louro in New York City and currently hosts the Um Segredo supper club, made his own after researching starter recipes for sourdough and kimchi. His version started with a basic bone broth and has evolved to use whatever ingredients he had. “It’s been fed vegetables, roasted bones, meats and trimmings,” says Santos. “The whole premise is to use what we have on hand. It gets fed something different every day, so the base is always kind of changing.”

Santos believes that his broth also imparts health benefits. “The vitamins and collagens that come out of the bones and minerals from vegetables help fight off colds,” he says. Santos drinks a pint of his perpetual soup each day—not just to reap the health benefits, he says, but to taste its flavor evolution.

But not everyone believes the perpetual broth hype. Food historian Ken Albala of Pacific University in Hawai’i is skeptical. “It seems that at a certain point you want to strain it and use it. I don’t think its flavor would intensify or improve either,” he says. “If it were reduced too much, it would get gluey and too intense. So really what’s the point?”

Michael Colameco, former executive chef at the Ritz Carlton Central Park South and host of the show Mike Colameco’s Real Food, disagrees, insisting the umami richness and complexity of aged broths has to be tasted to be believed. “It’s more than bone broth. It’s the base note of intensely complex dishes,” he says. According to Colameco, the ultimate achievement in a perpetual broth is a distinct spicy-sour flavor, which indicates that some fermentation has occurred. “But this is where you start losing your average American diner,” he says. They think fermented food equals rancid.”

Gray concurs. “Thinking it’s weird to keep a stock going for ages is very much a symptom of our disconnect with food and where it comes from,” she says. The complexity and messiness of keeping a burbling pot of broth simmering for ages, she points out, is also directly at odds with current housekeeping practices. But we may be sacrificing flavor and tradition in favor of sterility.

For those who want to maintain their own perpetual broth, here’s how to play it safe. “There’s a fine line between fermented and spoiled,” says Adaeze Okafor, a food safety expert at the Institute of Food Science and Technology in Cambridge, England. She says a broth should simmer at a temperature of 200°F at all times. Any lower, and bacteria may be able to survive, which is why a stock or broth should be promptly cooled and stored in the fridge when not on the stove. “Freezing it after is safer still,” says Okafor “But it’s not difficult to keep it safe for consumption.”

Properly maintained, a broth, stock, or soup can become part of the family, similar to sourdough starters passed down through generations. “I have fond memories of a cassoulet that I enjoyed in Languedoc when I was a girl,” says Perrotte. “That pot of bean stew had been simmering since 1948, my mother said. I marvel at the fact that I could still go there and enjoy a bowl from the same cauldron. What history!”

Caffeinated soups and chewing the leaves were once the norm.
victorian

Brown Windsor soup was reportedly a favorite of the Queen. The only problem? It may not have existed.
food

In the 1970s and 80s, when the guards stepped away, the pots and flames came out.
Video • Wonder From Home