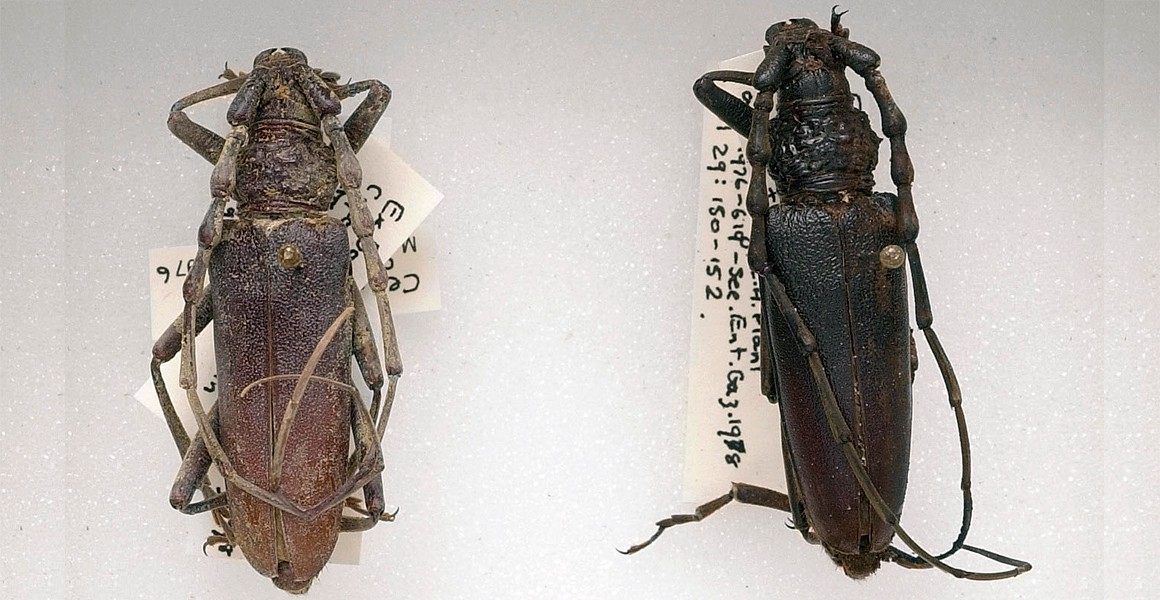 They don't look a day over 3,000. Trustees of the Natural History Museum, London
In This Story
Destination Guide

Once they reach adulthood, great capricorn beetles, Cerambyx cerdo, have only a brief time left on Earth. The bulk of their lives, which can span several years, is spent as larvae and pupae, boring through wood and nibbling as they go, then hunkering down beneath the bark of sun-warmed oaks until the weather invites them back out. As grownups, the beetles—a longhorn species slightly longer than a human thumb—have a month or so, which they fill with the drive to leave offspring behind. Adults hardly eat, unless they’re sampling the sap or twigs of trees where they will deposit their progeny. They rarely venture beyond those trunks and branches, where they will find a mate and consummate a fleeting union. The females lay eggs, then die. Adults never see multiple seasons melt into one another. One bloom is all they get.

But in England, one duo has seen many winters quiet into spring and summers cool into fall—thousands of them, in fact. Two beetles in the collection of the Natural History Museum in London were recently radiocarbon dated and found to be nearly 4,000 years old, meaning that their brief adulthood took place in the Bronze Age.

The beetles arrived at the museum in 1970s, when a farmer in East Anglia summoned museum staff to inspect some massive trunks extracted from the ground. The museum offers an inquiry service, in which experts can be called on to identify birds’ nests, possible fossils, anything that sparks questions such as “Is this going to hurt me? Is this interesting? Is this rare?” says Max Barclay, an entomologist and curator of beetles at the museum. The farmer worried that the beetles were pests wreaking contemporary havoc. “They were in such good condition,” Barclay says. “They don’t look like they’re that old.”

Unlike bog bodies—human remains preserved for millennia in damp peat—the beetles weren’t wrinkled or warped by time. And unlike the long-submerged dairy product known as bog butter, whose stench is sometimes described as a godless mingling of cheese, puke, and rancid milk, they didn’t have a funky aroma. They looked and smelled “just like normal beetles,” Barclay adds. “Without context, you wouldn’t know they’re anything special.”

Back at the museum, the specimens joined as many as 10 million other beetles, only about 500 of which are on display in public galleries. The salvaged wood was first dated in 1976, Barclay says—but at the time, the technology wasn’t refined enough to get a reliable date for the beetles, and would have required sacrificing the specimens. “Techniques have become much more sophisticated now,” Barclay adds. So, in 2020, he placed a small fragment of tissue from the insects’ hind area in a vial and shipped it to Anna Holden, a paleoentomologist trained at the American Museum of Natural History in New York. With collaborator John Southon at the University of California, Irvine, Holden recently radiocarbon dated the specimens and concluded that they are roughly 3,785 years old. That means the beetles weren’t freshly dead in the 1970s, hanging around a much older tree; they were almost as old as the tree itself. They emerged as adults in a prehistoric winter, Barclay says, and then died, “waiting for spring that never came for them.”

Incredibly old, astonishingly preserved insects are nothing new—specimens go back as far as the dinosaurs. Amber is the ideal preservation medium for beetles, Barclay says: The resin safeguards hairs and other fine details, and barricades the insects against air and other agents of decay. But peat bogs are another great place to spend a couple thousand years. The bogs boast acidity and a high concentration of organic material, plus little to no oxygen and limited nutrients, which discourage the microbes that would otherwise break everything down, says Richard Evershed, a biogeochemist at the University of Bristol who has studied bog butter. “It’s just what you’d want,” he says. “Preservation is superb.”

And beetles are spectacular candidates for preservation. “Beetles preserve well because they have their own body armor,” writes Ainsley Seago, associate curator of invertebrate zoology at Pittsburgh’s Carnegie Museum of Natural History, in an email. Their tough exoskeletons, made of chitin and topped with water-resistant wax, are “structurally analogous to Kevlar,” Seago adds. “All the soft body parts are concealed inside the exoskeleton, with the most important stuff—guts and gonads—protected by the elytra,” or hardened front wings. And death doesn’t make beetles’ bodies much less resilient: Their remains can linger for millions of years, and elytra can be so tough that scientists need to drill holes through them before mounting a specimen with pins. Large beetles such as Cerambyx are able withstand a lot, including being stepped on by humans. If a person stomped on the beetles “deliberately and hard,” Barclay says, “they’d be crushed—but if you were to lean on them, they’d survive.” Barclay suspects these particular beetles benefitted from the way the tannic acid in the oak mingled with the acidic bog. The insects’ remarkable preservation was a result of them being big and sturdy, as well as encountering “some very good luck,” he adds.

The beetles have spent the last 50 years in storage, but now that they’ve had a postmortem brush with fame—including being featured on television—Barclay is considering putting them on temporary display when the galleries reopen to the public. (The museum is currently closed due to the COVID-19 pandemic.) These beetles are no longer considered native in England—their range now includes Poland, France, and elsewhere—though a team led by Andrew Salisbury, an entomologist with the Royal Horticultural Society, has noted their recent presence in imported timber. Otherwise, the British-born specimens are known from fossils, Barclay says, and he is keen to track whether populations will return as the climate warms.

For now, he considers them proof that vast troves like the museum’s harbor unplumbed depths. At least several hundred new species are recorded in the collection each year, Barclay says, and evolving technologies have enabled researchers to ask new questions about previously studied ones, too. “In the 1970s, people thought these had told all the stories they had to tell,” he says. “You think you’ve finished with it, but you haven’t.”

For a Volcanologist Living on Mount Etna, the Latest Eruption Is a Delight

The 149-year-old specimen is one of millions at Britain's Natural History Museum.
museums

Or how to channel 5,000 years of history into one exhibit.
museums

The Museum Where Everything Is on Display