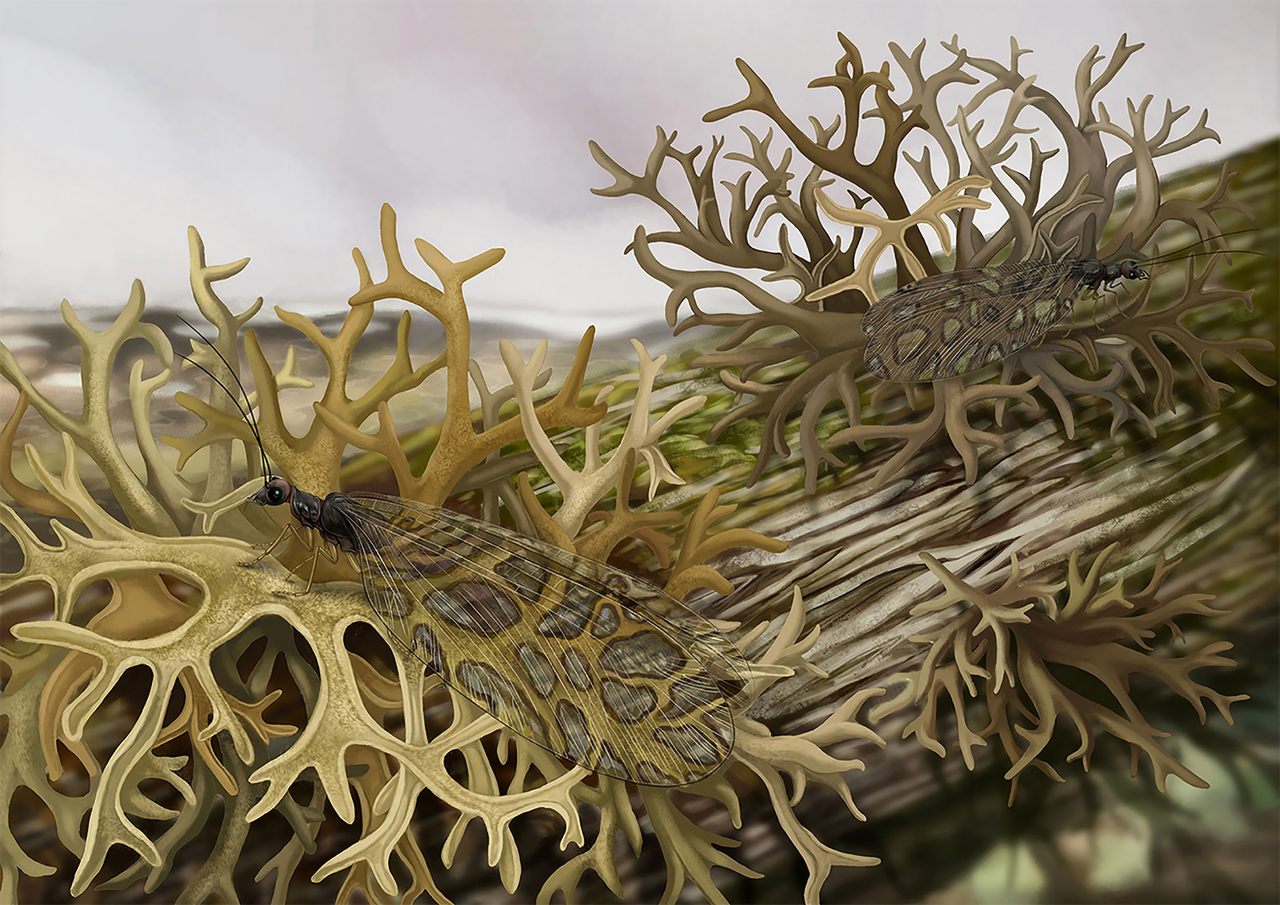 Lacewing or lichen? In this illustration, they're lookalikes. Xiaoran Zuo / CC0
In This Story
Destination Guide

Around 165 million years ago, the land that is now the fossil-filled Jiulongshan Formation, near the village of Daohugou in Inner Mongolia, was covered with lichens, mosses, and liverworts. Above that shaggy, pillowy surface was a wash of green: fern fronds, conifers, and ginkgophytes, including vanished relatives of modern gingkos. (It looked a bit like the present-day Olympic Peninsula in western Washington—lush, with nary a petal in sight.) Flowering plants wouldn’t show up for another 40 million years, but insects had already arrived. Dragonflies and damselflies zipped through the air. To evade them and the insect-gobbling dinosaurs that trundled below, moth lacewings probably did their darnedest to blend in.

They apparently pulled it off by looking a lot like lichen. In a new paper in the peer-reviewed, open-access journal eLife, a team from China’s Capital Normal University, Chinese Academy of Sciences, and the Smithsonian’s National Museum of Natural History reports that insects they dub Lichenipolystoechotes—a newly recorded subgroup of two species of moth lacewings—were spangled with lichen-like markings that made them hard to distinguish from the lichen itself.

Insects have spent millennia treating every day like Halloween, cloaking themselves in convincing disguises. “Several lineages of insects such as walking sticks and leaf insects (Phasmatodea), some butterflies (orange oakleaf) and grasshoppers (katydids), and many others, have developed plant mimicry in response to predation,” says Maureen Turcatel, collections manager of insects at the Field Museum in Chicago, who was not involved in the research. Lichen technically isn’t a plant, but the strategy is the same: “Camouflage makes it harder for visual predators to spot them, therefore, they have an increased survival rate.”

A handful of caterpillars, beetles, and spiders look a lot like lichen, and some other insects cover themselves with little bits of the real stuff. After comparing fossil insects to fossil lichen, the authors of the eLife paper—led by Hui Fang, who worked on the project as part of PhD work at Capital Normal University—suggest that they have found the earliest known lichen-mimicking insect to date.

Illustrations of the long-ago lacewings show little splotches, in a patchwork of dark and light—a bit like cheetah print, or a bunch of tiny puddles viewed from above. The authors argue that the insect’s patterned wings are a doppelgänger for the branching visible on Daohugouthallus ciliiferus, a lichen that existed at the time.

The scientists suspect that the disguise may have allowed adults to fly under the radar if they were mating or laying eggs atop the lichen. When they strayed from it, the unusual patterning may have served as a kind of disruptive coloration, which boggles would-be predators. “It is not contradictory that both explanations were co-occurring,” says Yongjie Wang, a researcher at Capital Normal University and a co-author of the paper.

Working with a small sample size from a vanished time, it’s easy to tip toward speculation, says Katherine Drotos, a graduate student in integrative biology at the University of Guelph who studies lichens. “Speculation is where this sort of work takes you since you have so little context to go on, but you have to be careful not to take it too far, lest it be interpreted as fact,” says Drotos, who wasn’t involved in this work. “We can say that these two things look the same, and we can look at modern examples, but beyond that we have to be careful because we don’t have the evidence or context for why the lacewing may have evolved, and what the ultimate nature of that relationship was.”

Drotos praised the fossils themselves. “Fossil discoveries like these give us tiny glimpses into the past, and these are particularly elegant examples,” she says, and adds that images captured with a scanning electron microscope show structures that “lend real weight to the idea that Daohugouthallus is a lichen.” Still, she says that the authors “could have hedged a wee bit more” when it comes to causal linkages.

Conrad Labandeira, senior research geologist and curator of fossil arthropods at the Smithsonian’s National Museum of Natural History, points out that the team found a 95 percent match between the features of the forewing and the features of a lichen thallus (the term for the stemless, leafless body of a lichen). Labandeira is one of Fang’s instructors at Capital Normal University, and a co-author of the paper. After consulting literature about mimicry and disruptive coloration, he adds, the team “posited the most parsimonious explanation that we thought was consistent with the data.” He believed them to be “careful in our wording about ascribing causality,” stippling the paper with phrases such as “a reasonable inference” about mimesis.

There’s much more to learn about these lacewings and their closest present-day descendants. They’re a relict group, a category sometimes known as “living fossils”—their ranks have dwindled, and the individuals that remain have scattered, says Labandeira.

He is intrigued by the idea that even when ecosystems transform, survival strategies such as mimicry seem to stick around. These Middle Jurassic ecosystems “have virtually nothing in common, taxonomically, with modern ecosystems,” Labandeira says. The lichens may be related to present-day ones, but to Labandeira, the key thing is that “it’s the interactions that are very similar.” He compares these prehistoric species to a baseball team that’s been around for ages: The players are all different, but the positions are the same. In this case, the athletes are lacewings, and they seem to have sported some jaunty, lichen-like uniforms.

The monstrous menace known as Whatcheeria hints that our distant ancestors may have been more like us than we thought.
zombies

11:15
Want to see fewer ads? Become a Member.
From Around the Web
Atlas Obscura Trips
China: The Great Cuisines of the Middle Kingdom
View This Trip
Thanks for sharing!