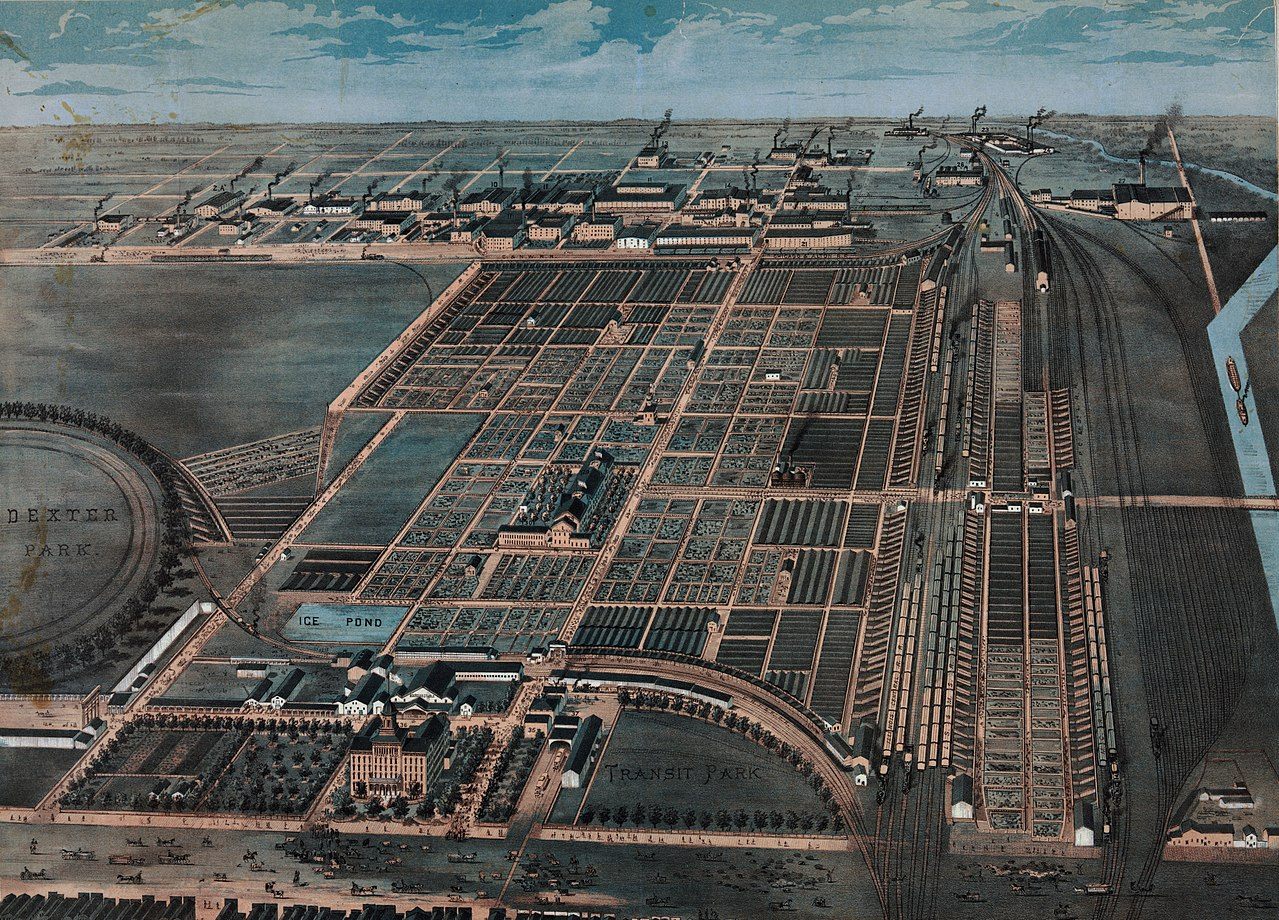 An 1870s illustration of the Union Stock Yards of Chicago, which was home to massive slaughterhouses and meatpacking operations. Library of Congress / Public Domain

In 1858, a businessman calling himself “Olfactorious” sent an angry missive to the New York Times. Following his doctor’s advice, he had moved out of the city in search of “sweet, uncontaminated air” in the countryside. But like many suburbanites, he still had to commute to the city for work, and he complained bitterly that his journey was dangerous given the stenches along his route. Each day, he passed a “festering” sewer, the source of “an effluvium sufficient to start the yellow fever.” Next came a milk factory with its “peculiar, penetrating, stump-tail odor,” and then a fat-rendering establishment that filled the air “with an odor exactly like roast mutton, only more so.” Thanks to the theory of miasma, which had a long and global history, Olfactorious feared that he would fall sick if he inhaled these foul smells.

Melanie Kiechle, a history professor at Virginia Tech and the author of Smell Detectives: An Olfactory History of 19th-Century America, 1840–1900, researches how Americans once tried to use their sense of smell to stay healthy. Until germ theory was widely accepted and viruses were discovered in the 1890s, Americans looked to the environment to understand the spread of disease. Nineteenth-century doctors blamed miasma, a noxious form of “bad air,” and worried about the poisonous fumes and putrid smells of America’s growing cities.

Back then, urban environments were olfactory nightmares: Chicago reeked of its slaughterhouses, New Orleans smelled like its gasworks, fertilizer factories dumped stinking heaps of waste in the middle of Manhattan, and animal carcasses rotted in the filthy canals of Providence, Rhode Island. For the first time in history, large numbers of Americans lived in overcrowded cities, many in poorly ventilated apartments, and killers such as cholera, tuberculosis, yellow fever, and typhus could strike at any moment, and often did. The campaign to eradicate foul odors and disinfect the air that urban dwellers breathed gave rise to a public health movement. Its founders took as an aphorism the words of a British health reformer: “All smell is disease.”

Atlas Obscura spoke to Kiechle about America’s olfactory anxieties, 19th-century fears of disease, and what these histories can teach us about the COVID-19 pandemic.

If you were dropped from the present into a 19th-century city, you would say that it stinks. Horses, cows, pigs, dogs, chickens, and a host of other animals made their homes on city streets, where they found food and deposited their waste. Cities smelled strongly of manure as well as industrial activities. I’m talking about slaughterhouses and bone boilers, fertilizer manufacturers and leather tanners, fat renderers and distillers that fermented grain to make alcohol. Nineteenth-century Americans called these the “offensive trades” because they offended the nose. After the mid-century discovery of petroleum, oil refiners joined the list.

Even though many of these odors were familiar, 19th-century Americans worried about them because they were concentrated to new intensities. Since air was supposed to be “inodorous”—even Webster’s American Dictionary said this—strong odors were a bad sign. The New York Times warned Americans: “Here, in the City, you respire disease. Odious gases regale you at every step. The air is heavy with noxious smells.”

How did bad air become synonymous with disease?

Miasma theory, which held that bad airs spread disease, was a widespread belief with a long history. At the end of the 18th century, scientists discovered that the air humans and animals exhale could kill. Experimenters such as Joseph Priestley put mice in airtight bell jars and observed that the mice died when alone, but lived longer if there was a plant inside. These experiments led doctors to warn against inhaling “carbonic acid gas” (today we call it carbon dioxide) by breathing in air that others had exhaled––a common occurrence in crowded urban spaces like theaters, schools, and churches.

In the 19th century, miasma theory no longer came from physicians, but was common sense, in that most people shared this understanding and regularly acted on it. Americans learned from a young age to cover their noses, to grow sweet-smelling plants, to close their windows against stinky breezes, and to avoid places that smelled badly to protect against everything from headaches and nausea to cholera and yellow fever. People were very attentive to changes in the air they breathed.

Now that we have a scientific understanding of microbes and bacteria, it is no longer valid to believe that miasma causes illness. However, this was the best understanding that people had before germ theory, and it often resulted in people doing the “right” thing to protect health, just for what today we know is the wrong reason. And the idea that a disease is airborne is still very much alive and valid.

How did 19th-century Americans try to protect themselves from the spread of disease?

In the 19th century, women and men carried perfumed handkerchiefs, smelling salts, and sachets, or they wore nosegay—a fragrant flower pinned to the lapel—so that when they encountered bad odors, they could cover their nose or bury it in the flower. In 1862, when Chicago’s aldermen formed a “smelling committee” to investigate the sources of the city’s foul odors, they carried bottles of cologne, camphor, chloride of lime, lemons, cigars, and handkerchiefs.

At home, women believed they could disinfect their air by filtering it through sweet-smelling plants. They planted lilac bushes below their windows and filled window boxes with rosemary, sweet peas, and other fragrant plants. Recommendations for specific plants could be found in newspaper columns and in the writings of Catharine E. Beecher, essentially a 19th-century Martha Stewart.

The new coronavirus spreads primarily through respiratory droplets, and the U.S. Centers for Disease Control and Prevention recently recommended cloth masks to slow its transmission. Were face coverings also common in the 19th century, albeit for different reasons?

Absolutely! Chicago’s aldermen investigated the city’s smells because dockworkers on the Chicago River had started wearing nose guards to defend against stench. Fearing these workers would quit, the Board of Trade petitioned the aldermen to do something to reduce the city’s bad smells.

People also dreamed up new inventions, like a fragrant lotion to rub under the nose. In Scotland, chemist John Stenhouse patented a charcoal respirator, an uncomfortable-looking device built from wire gauze and filled with powdered charcoal, a known deodorizer, that covered the nose and mouth. Many chemists believed it would be standard issue for workers in the offensive trades.

It’s difficult to evaluate how healthy or not these 19th-century responses were, since today we’re operating with a different understanding of disease causation. Charcoal does work as a filter, so I think the charcoal respirator is a sound technology, but I cannot say if Stenhouse’s respirator was effective or even widely used.

Ozone generators were another weird fad based on concerns about the air and its effects on health. After the discovery of ozone in 1839, scientists began measuring it in the environment and found that ozone levels were high in areas people associated with good health—pine forests and at higher elevations—and very low in cities, especially during epidemics. Current knowledge is that inhaling ozone seriously harms the respiratory system, so ozone generators would be dangerous for household use. Plus, ozone is combustible.

What’s important to remember is that solutions to large-scale problems like the spread of disease require society-wide solutions. In the 19th century, many Americans implemented personal strategies to try to improve the air they breathed, but these were always limited to who could afford them. Real change came not from these small-scale adjustments, but from large-scale interventions, most notably in public health regulations of industrial practices, the precursor to the Clean Air Acts in the 20th century.

What connections do you see between the COVID-19 pandemic and earlier ideas about the spread of disease?

I’ve been thinking a lot about this question. Given the early and larger outbreaks of the coronavirus in cities, and strict instructions to maintain social distancing and at least six feet of space from one another, it’s clear that dense populations are still a health liability. This reminds me of how 19th-century Americans feared inhaling the “vitiated air” that someone else had exhaled. They did not know about viruses, but 19th-century ideas have a strong resonance today.

I’ve also been paying attention to reports that a sudden loss of smell is an early coronavirus symptom that means you should self-isolate. This is clearly a different reason to heed our senses than the 19th-century insistence that bad smells would cause disease. But it does suggest that one way that we can protect and monitor our health is by paying attention to our sense of smell.

From Nodding Night Court to Dove Sail Lane, the town’s address choices are both practical and poetic.
ancient technology

It all goes back to a rather literal reading of some rather vague instructions in the Constitution.
plague

It reshaped the city and inspired a revolutionary vaccine.
Video