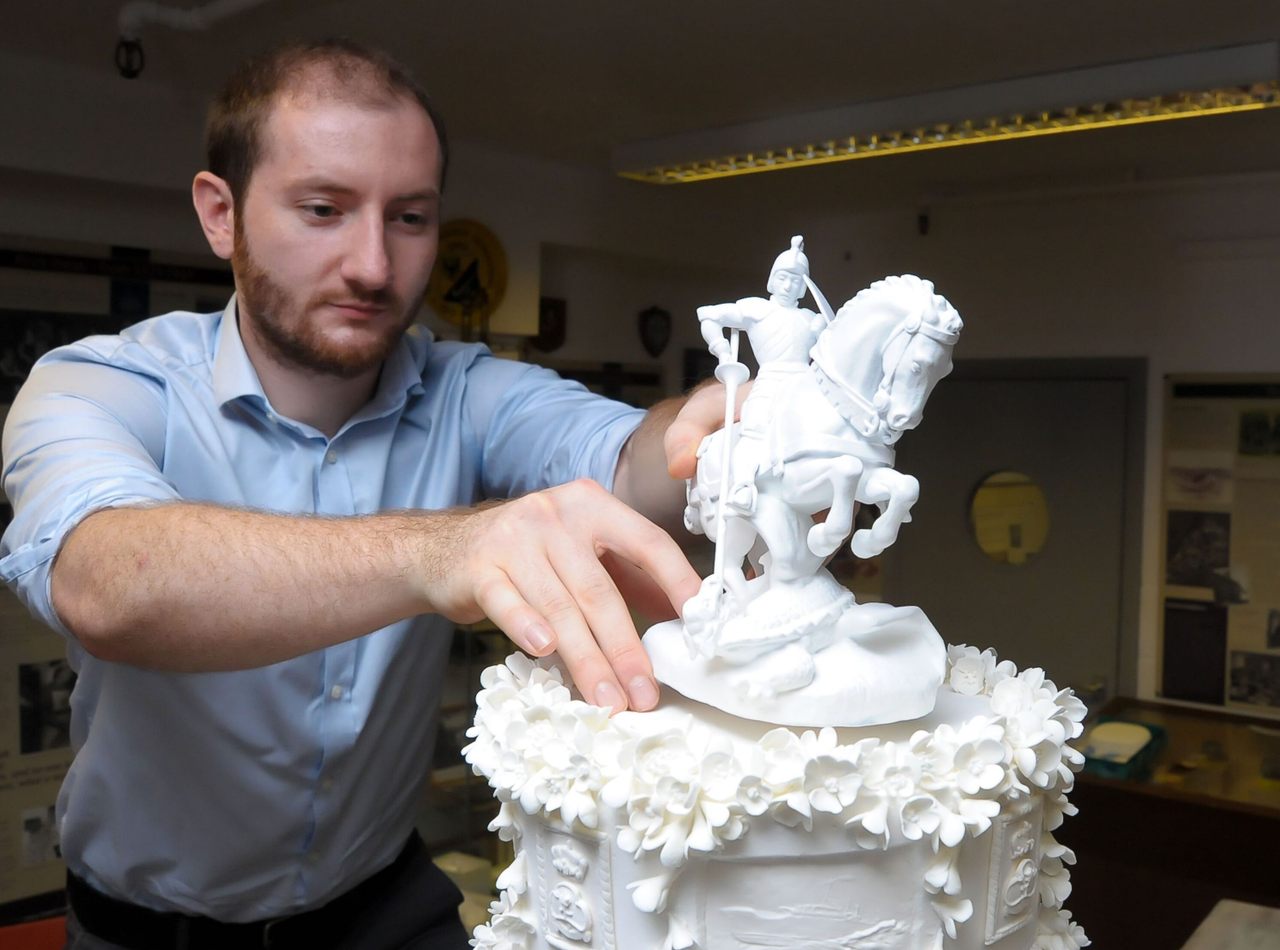 Engineers 3-D printed a sugar replica of the statue of Saint George. Courtesy of the British Sugarcraft Guild
In This Story
Destination Guide

119 Articles
1817 Places
In memory of Queen Elizabeth II, we’re resurfacing some of our stories and places related to her remarkable life.

One day in 2015, Steve Cornish was tipped off that squatters had broken into the Rotherhithe Pumphouse in southeast London.

The Pumphouse had once been open to the public, as a museum of the Bermondsey district’s history. But it closed in 2011, when the local council slashed its budget under austerity measures.

The council had installed security guards outside, but Cornish, who’s the chairman of the nearby Russia Docks woodlands, is a local boy. “When you’re born and bred here, you know how to get in places,” he says. He gained access to the Pumphouse by claiming to have been sent by the health and safety executive. “As soon as I went in there, there was graffiti and damage. It was in a terrible state,” he says.

Worse was to come on the mezzanine. “I just had to stop. I was in shock,” he remembers. Queen Elizabeth’s wedding cake had been turned upside down and doused in red paint, “as if blood was running down it.”

Admittedly, it wasn’t actually the cake eaten by the future Queen Elizabeth II and Duke of Edinburgh. Their wedding cake was made by the cooks of the Royal Navy. But the bakers of the Peek Freans biscuit factory had sent a fruit cake to the wedding in 1947 as a gift nevertheless. Topped with a solid silver statue of Saint George, it weighed 630 pounds and was driven at walking pace in a specially modified car from the factory in Bermondsey to Buckingham Palace, where it joined numerous other cakes sent from around the United Kingdom. The same Peek Freans employees who decorated the cake also decided to make a sugar-paste replica to commemorate their achievement.

The original, edible cake was most likely distributed around hospitals, says Andrew Hill of the British Sugarcraft Guild. But until 1989, when the factory ceased operations, the replica held pride of place in the Peek Freans lobby. Chris Carr, the great-great-grandson of one of the original Peek Freans owners, recalls running to look at it every time he visited. Each of the lofty cake’s six frosted tiers told a story of the then-Princess Elizabeth and her spouse. The top tier’s panels showed the official badges of the Sea Rangers (the young princess was enrolled at 16). The level below depicted the Royal Naval College at Dartmouth where Prince Philip trained, and where the royal couple reportedly met for the second time and fell in love. Halfway down, the third tier depicted St. George’s Chapel at Windsor Castle, where many royals would later tie the knot.

After the factory closed down, the replica was moved down the road to the Rotherhithe Pumphouse. After that too closed, most of its collection was distributed around local schools or sold. This worried Gary Magold, another Bermondsey son who works as a clerk in the City of London business district. As a major employer in the area, Peek Freans is still remembered with affection. “It kept people’s heads above water,” says Magold. He arranged for the Peek Freans displays to be moved back to the old factory, this time to a suite of rooms temporarily donated by the current owners. It’s now known as the Biscuit Museum. (The site will soon make way for a mixed development of new apartments, “affordable” housing, and commercial units.) But to his dismay, the replica cake had to be left behind in the shuttered Pumphouse. “It was just too fragile to move,” he says.

That had consequences. Back at the Biscuit Museum, Magold shows me some of the remaining shards of the replica cake on a tray. “Smashed to smithereens,” he says.

After Cornish discovered the destroyed cake, Magold, who volunteers as keeper of the museum alongside Frank Turner, the factory’s former head of fire and security, called the British Sugarcraft Guild, a group dedicated to the traditional crafts of cake decoration and sugar ornamentation.“I said, ‘You don’t know me but I’ve got the Queen’s wedding cake that’s been vandalized. Do you think there’s anybody that could get it restored?’”

It couldn’t be done, was the response. Despite Magold’s initial dismay, another of the Guild’s members suggested that the replica be completely remade. Out of the wreckage came “a very happy project,” says Magold. The British Sugarcraft Guild pledged to remake the replica, bringing together the Biscuit Museum, Guild members, academics at Warwick University, and Buckingham Palace itself.

At the University of Warwick, engineering professor Mark Williams and project engineer Mike Donnelly scanned the cake remains to produce silicone molds for the detailed side panels. Meanwhile, award-winning cake decorator Jan Thorpe drew up technical diagrams for each tier, which were sent out to seven Sugarcraft Guild groups across the country. “It was the first time the committee members of the Guild had actually all worked together on a project,” says Magold.

Across the country, workshops of sugarcrafters—mostly women—labored together at long tables. Some rolled out paste flowers, others piped delicate sugar lattice-work. Volunteers working on the project ranged in age from 25 to nearly 90, and included professional and amateur sugarcrafters alike. The project even tapped the expertise of ex-royal baker Eddie Spence, who made cakes for the royal family prior to his retirement.

There were surprises. A package of sugar paste flowers came in from Ghana, sent by an international member. A BBC producer who knew one of the Queen’s historians wrangled an invite to the Billiards Room at Buckingham Palace. On a long table draped in red, Donnelly laser-scanned the now-tarnished silver statuette of Saint George that Peek Freans had sent as a cake topper in 1947, while Magold looked on. These scans were used to exactly reproduce the topper with a 3-D printer.

The delicate sugar lattice decorations proved troublesome. Each took 45 minutes to make and more often than not, they shattered. For every 48 made, Turner says, roughly eight survived. While infuriating, the Guild volunteers enjoyed working on such a prestigious project, especially one which showcased their aptitude and craft. Turner and Magold contributed too. Turner added a panel depicting Glamis Castle, while Magold’s self-described “horrible big fat flower” was reserved as the final piece of decoration, the cake’s crowning glory.

With its cornucopias, pilasters, molded plaques, and flying trellises made of sugar-paste, the decorations alone took over 130 Guild volunteers roughly six months to complete. In all, the entire project took around two years. Once volunteers finished the individual pieces, they sent them to Bermondsey, where they were painstakingly assembled at the Biscuit Museum over the course of a week.

The completed replica was unveiled in time for the Queen and Prince Philip’s platinum wedding anniversary in 2017, and the museum threw a party for its debut. Encased in a glass box, the replica cake now dominates the Biscuit Museum. Surrounded by vitrines holding biscuit molds, tin tea caddies, and cake-decorating tools from the Peek Freans factory, it’s a tribute to Bermondsey’s past. “Everybody was really proud to take part,” Hill says.

In fact, Guild members enjoyed working together so much that they organized follow-up projects. In the museum office, another sugar-paste cake waits to be enclosed in its own cabinet, having just travelled back from a show in Birmingham. “Whoever the vandal was, they didn’t win,” says Magold. “Because out of it came this project.”

The often-insulted confection was once featured at weddings as well as Christmas.
food