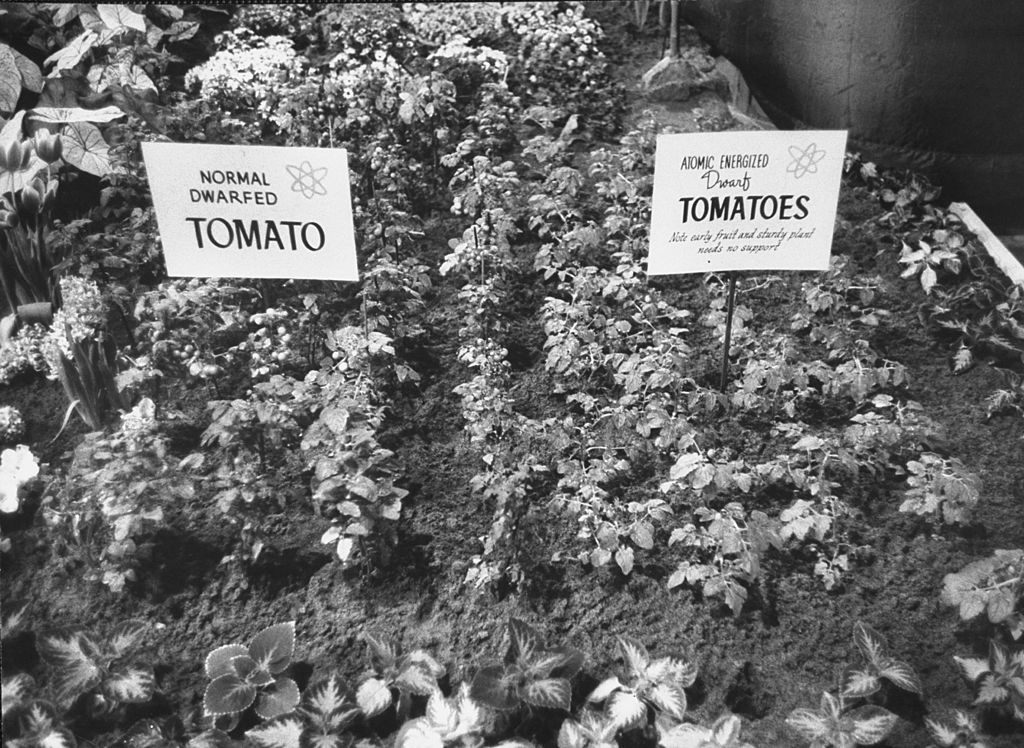 In the early 1960s at garden shows across the United States and in the U.K., you’d see more than your usual roses and begonias—you could see science at work. Giant peanuts. Huge tomatoes endlessly growing from a single stock. Multi-colored flowers on a single bush, or seeds that promised to grow an elusive blue rose. Genetic anomalies abounded in displays of flowers arranged to resemble protons and neutrons, advertising a new wave of gardening techniques. Horticulturists lovingly called these “atomic gardens” or “gamma gardens.”

Each of the plants in a gamma garden was a mutant, grown with the help of radiation. They were part of a new, experimental trend in horticulture that was meant to devise new plant breeds and revamp the then-sordid reputation of nuclear technology. From the 1950s into the 1970s, radioactive plants grew both in labs and in amateur gardeners’ backyards.

The mechanism of a gamma garden was simple: radiation came from a radioactive isotope-laden metal rod, which jutted out of the garden’s center and exposed the plants to its silent rays. Radiation slowly bludgeoned the plant DNA like a hammer and changed how genes were expressed.

The largest, usually lab-based gamma gardens could span up to five acres, with plants arranged in sections, like a pizza. The plants nearest to the radioactive source died, and the next farthest grew tumors—but in the next group the mutant action began to show. Once the radiation caused a desirable trait, like fatter tomatoes or larger rosebuds, the mutant seeds were bred to form more super-plants or were irradiated again to further change the DNA. In home gardens, enthusiasts normally used pre-irradiated seeds and bred their plants for mutated traits, but hardcore gamma gardeners obtained a governmental license to use cobalt-60, a solid radiation source, to irradiate plants and seeds.

According to Helen Anne Curry in Evolution Made to Order, “From the start, the assumed appeal to growers of using irradiated seed was less the promise of prettier or easier-to-manage garden plants and more a shared curiosity about the effects of radiation and the aspiration to produce something novel.” The promise of new plants was not lost on the horticultural hobbyist, though; by 1961, Home and Garden shows across the United States and the U.K. were decorated with showy displays of “Atomic Age Gardens,” with multi-colored begonias and giant peas on display, and instructions for building your own radioactive garden nearby.

While new and exciting plants were a focus of atomic gardening, the trend started with scientists who aimed to build a new relationship between nuclear energy and the world. Nuclear fission had a deservedly terrible reputation post-World War II, but from the 1950s through the early 1970s scientists were interested in using radiation for good. There must, they believed, be a way for our power over the atom to produce some positivity in the world. And the solution? Mutant plants. Atomic gardening could speed up evolution, and seemed like a solid answer to the problem of food shortages and plant disease.

The idea caught on: An August 1955 New York Times article exalted the possible benefits of the new science with the subheadline “Irradiated Seed Will Make The Desert Bloom,” highlighting scientists in Geneva and the U.S. who were pioneering some of the research. The “implications for a food-short world were said to be ‘enormous,’” the article claimed. A Boston Globe story from 1961 asked, “Would you like to grow rose plants that might produce blossoms of several color on the same bush? Or would you prefer 10-foot marigolds or perhaps tomato plants that yield as many as 120 fruits per plant?” Promotions and contests, such as the New Discovery Project, offered cash prizes of $1,000 for the “most unusual” plants reported to them. While scientists were the atomic-gardening pioneers, with labs in the U.S., U.K., Japan, India, Costa Rica, and USSR, gardening enthusiasts soon caught wind of the possibilities new plant varieties posed.

In the U.K., gardening enthusiast Muriel Howorth was inspired by the activism and science of gamma gardening after experimenting with and growing an unusually large “x-rayed peanut” plant, a gift from atomic-gardening researchers she called her “science friends.” Paige Johnson wrote in her paper Safeguarding the Atom that “in spite of being both a woman and a non-scientist Howorth wrote her own entry in the Who’s Who of Atoms,” because of her experiments, and she was serious about creating an international movement. In 1959, Howorth formed the The Atomic Gardening Society, “a cultural body for the guidance of atomic plant-mutation experimentation,” made news appearances, sold irradiated seeds and published a book to help others get started on their own atomic journeys called Atomic Gardening for the Layman.

Because of Howorth, more than 300 gardeners soon set up experiments in the U.K. to achieve new and intriguing plants, sometimes under healthy competition for Howorth’s “Mutant Peanut Award,” based on the almond-sized peanuts she’d previously grown. Howorth staged conventions for atomic gardeners to meet, and even gained Albert Einstein as a patron for her new organization. Johnson wrote that Howorth “moved smoothly and of her own volition into the sphere of science and technology,” bringing hundreds with her into a newfound love of science, gardener or no. At one event called Atoms for Women, Howorth gathered 250 women to attend a play meant to encourage science interest born of her gamma gardening passion, where 13 “bosomy” Atomic Energy Association members “in flowing evening gowns gyrated gracefully about a stage in earnest imitation of atomic forces at work.”

Gamma gardening had its own movement in the United States, where oral surgeon and gardener C.J. Speas fashioned a radioactive experimental lab from a concrete bunker in his backyard, and sold “atom-blasted” seeds of radishes, sweet corn, and tomatoes to the public. (His man-in-the-moon marigolds later inspired a play.) According to Curry, Speas would go to garden shows in the morning, standing near atomic gardening displays while selling his seeds and giving advice to aspiring gamma gardeners. Speas’ seed packets boasted impossible-sounding results, including 120 tomatoes harvested from a single plant, but also advertised disease resistance and novel vegetable shapes.

Genetically modified foods have a precarious public opinion today, though genetically modifying foods is something humans have technically been doing since at least 7800 BC. Before gamma gardens, farmers and scientists throughout the ages modified plants using selective breeding to enhance a characteristic over a few plant generations, or through chemically induced mutations. Radiation was, as John James wrote in 1961 at The American Rose, “something to be excited about.” Now, your average hobbyists could see the process of genetic variance at home. The results could be unpredictable; “don’t expect miracles every time,” he warned—but in the meantime, enjoy the experience. By 1962, garden shows began featuring “atomic energized” tomatoes, and the new radiation-bred seeds and vegetables soon made their way to the supermarket.

Howorth, Speas and many scientists and enthusiasts were not just trying to earn a quick buck—they were making an earnest attempt to change and help the world. Alas, while the initial hype of irradiated plants was strong, scientists grew frustrated with the haphazardness of the genetic mutations, through a few atomic gardening labs still exist today. There was no way to control which genes would pop up in a gamma garden or what their effects could be. The public had also grown wary of the relationship between radiation and cancer, and began worrying about the radioactive tools they used to produce their plants. While Howorth remained a staunch supporter of the gamma garden method until her death in 1971, scientists turned to the more accurate transgenic method of plant-gene splicing, which removes or replaces a few very specific genes to produce, say, disease-resistant plants, a method used in GMO produce today.

Still, the descendants of some plants from the atomic garden exist on our supermarket shelves and bouquets. Breeds of beans and heirloom begonias are mixed in with newer genetically modified foods and the more traditionally bred plants of yore. While the controversy over GMO foods is currently high, gamma gardening certainly contributed to a more positive post-war reputation for nuclear energy. And, of course, those against the idea can at least feel secure that their neighbors are not creating a radioactive hotbed of their backyard.

Orchids were once considered the world’s most difficult and exotic flowers. So why can you buy one for $12.99 at Trader Joe’s?
maps

Clones and descendants of the famed tree grow on 6 continents.
science

A second life for an organization of scientists who questioned how their work was being used.
Video • PinDrop