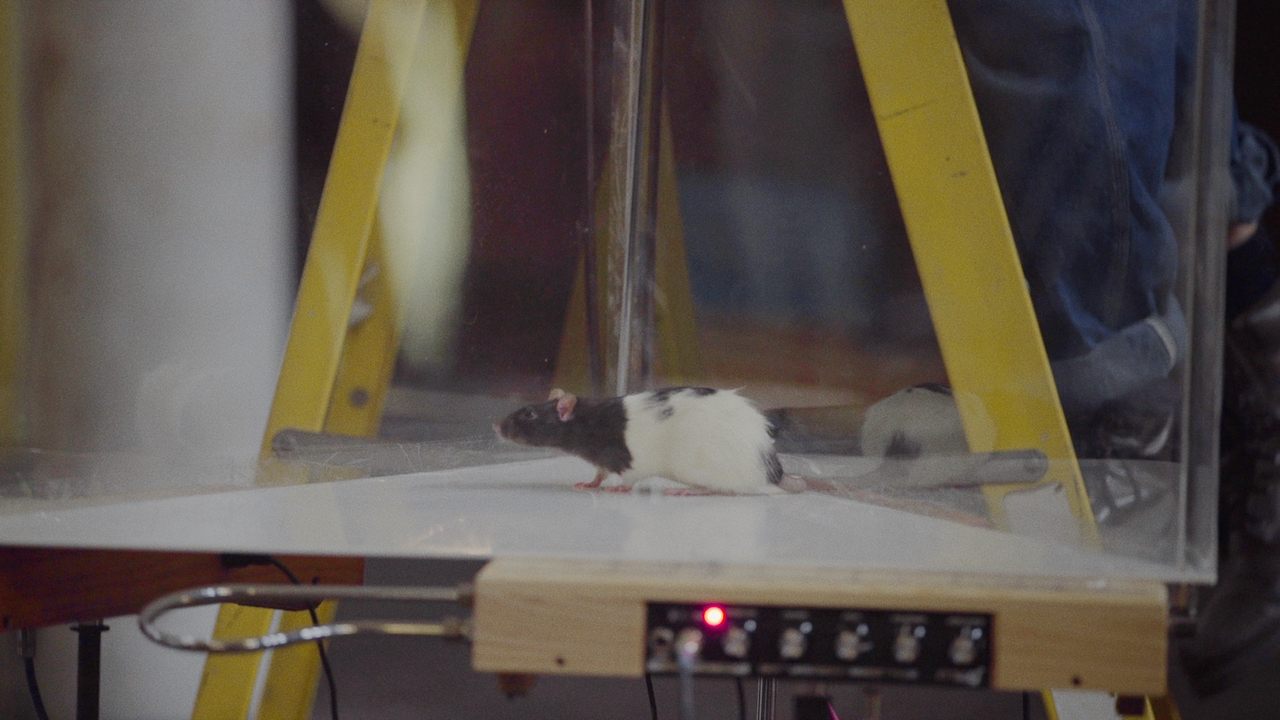 The experimental Baltimore musician Dan Deacon thrives on audience participation: at live shows, he plays right down on the floor with his listeners. So when the filmmaker Theo Anthony asked Deacon to get even closer to the ground, he didn’t really have to think twice. “[Theo] posed the question: Can you make music with rats?” Deacon recalls. “I had never made music with any other species. It was an interesting question. And I didn’t want to say no, because it seemed cool.”

Anthony was working on what would become Rat Film, a feature-length meditation on the history of racial segregation in Baltimore. In the movie, rats provide a lens through which to see the city, inspiring conversations about everything from zoning to pest control. We watch them leap out of trash cans, scuttle across streets, and (largely) avoid death by poison, pellet gun, and fishing rod. We hear about the things they’ve chewed through, and see the spaces where they’ve made their homes.

On the soundtrack, though, rats express themselves in a different way: they play the theremin.

The history of experimental music is filled with animal participants. Throughout the 1950s, the French composer Olivier Messiaen recorded prairie chickens and woodthrushes, transcribed their songs, and incorporated them into his pieces. A couple of years ago, artist Wolfgang Buttress had a band perform alongside 40,000 live bees at the Royal Botanic Gardens, Kew.

As Deacon first weighed Anthony’s request, he thought back to a bug-based performance he had learned about from one of his college professors, the composer Joel Thome. For this piece, four insects of different sizes were released on an overhead projector. “As the bugs moved from one corner to the next, the players played along,” explains Deacon. “The bugs became the score.”

This type of collaboration—in which the movements of an animal inspired the movement of a melody—“seemed like a good starting point,” he says. But he wondered if he could manage an even closer collaboration. “How can the rats actually make the sound?” he remembers thinking. “What kind of sensors can we put around them?”

That’s where the theremins came in. Deacon happened to have three lying around. Theremins are unusual in that you can play them without touching them—instead, two antennae poking out of a central console detect changes in the magnetic fields surrounding them, and transform these changes into a kind of eerie, keening sound. One rod protrudes vertically from the instrument and controls the pitch, while a metal loop on the side governs the volume. Although they’re easy to make noise with, theremins are notoriously difficult to master. But the rats didn’t have to know that.

When it came time to record, the group set up in a warehouse space inside a local church. Anthony and his father had built a large plexiglass enclosure in the shape of a triangular prism—because, as Deacon explains, “rodents like to move against walls.” They installed one theremin along each edge, with the vertical antennae sticking up into the enclosure, and tuned them so that they would harmonize. Then they released the players: a trio of pet rats belonging to Louis Eagle Warrior, a local musician who specializes in the Native American flute.

Eagle Warrior’s pets are music lovers: in one scene in the film, they perch happily on his shoulders as he plays a somber melody. But they weren’t quite sure how to play this new creative role. “For a lot of it, the rats just sat in the corner,” says Deacon. “I think they were like, ‘What is this? Why am I here?’ But after a while, they would move around. Even their microgestures would create a huge amount of [data], and these really odd swells.”

Deacon recorded audio from the theremins. But he also used them to transmit raw information about how voltage was fluctuating within the enclosure—in other words, an exact account of how the rats were moving around. He then took this data and began messing with it. He used it to “play” a number of software instruments, tweaking the melodies to achieve emotional tones that went with the film. “The rats’ movements aren’t music,” Deacon explains. “It’s data that could be applied … My job was to edit [this data] in ways that I thought were musical.”

Eventually, he plugged it into a Disklavier player piano, which uses electronic data to physically press the keys on an acoustic instrument. This led to the score’s first track, “Redlining,” named for the racist zoning practices that keep certain neighborhoods from receiving proportionate city support. The song sounds like human music—there are recognizable tones and harmonies. It even sounds like Dan Deacon: it has some of his work’s trademark combination of energy and yearning. But the rats’ contributions are evident, too. Long periods of stillness alternate with scurrying arpeggios, as though the musicians were being chased up and down a keyboard. It doesn’t easily map to a recognizable rhythmic grid.

The score as a whole uses the rat theremin data in several songs, including “Rat Poison” and “Calhoun,” where it’s played by a synthetic instruments. It also features other elements, including improvisations by local (human) musicians. But, Deacon says, “there are very few tracks that don’t have the rats’ signature on them.”

At this point, the rat theremin has been dissembled, and the rodent performers have gone back to their normal routines. As for Deacon, he is ready to find some new partners. “I would definitely do it again with whatever species wanted to collaborate,” he says. “[The rats] were great to work with, but I don’t want to become the rat music guy.”

But co-creating the score has reminded him of the ways in which humans limit ourselves by counting rats out. “If we’re going to assume we’re the smarter of the two species, you’d think we’d come up with a way where we could actually coexist with them,” he says. Maybe making music together is a start.

But did they create the famous one with a starring role in Citizen Kane?
music

The theremin's mystery endures, and virtuosos are still fighting for its recognition.
objects of intrigue

It traveled three continents, survived desert warfare, and accidentally ended up with a man who'd been looking for it all along.
Video • Object of Intrigue