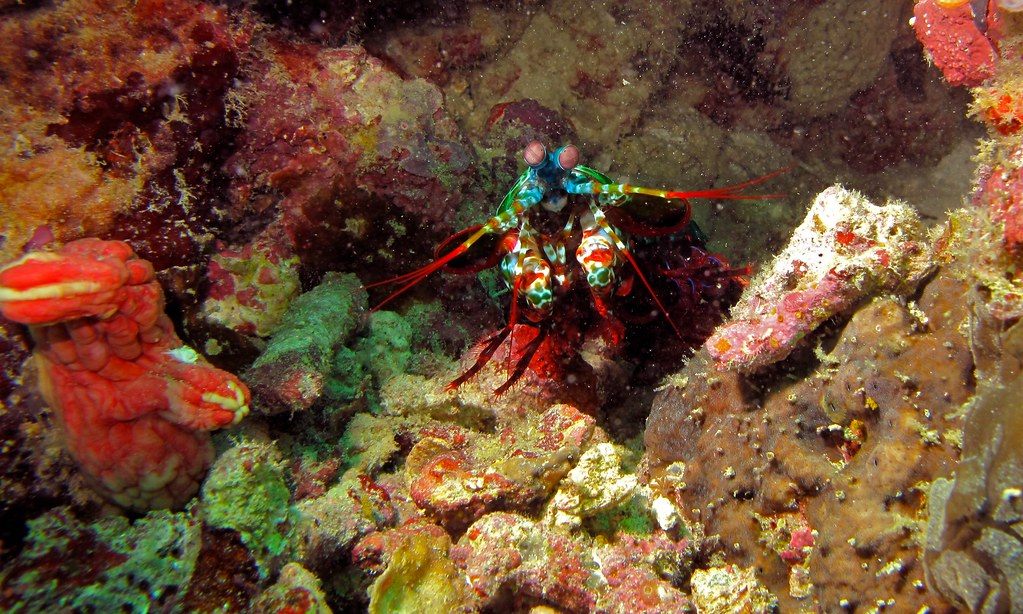 Earth is more alien than we often give it credit for. Bernard DUPONT/CC BY-SA 2.0

For as many fascinating, downright unbelievable places as there are to explore on our planet, there are just as many, if not far more, mind-blowing animals. Sometimes it can feel like nature is taking its cues from a hyperactive 12-year-old with a big imagination, or that all the alien creatures we need already exist right here on Earth. A deer with long vampire fangs? Sure. A shrimp that punches so hard and fast that the water boils around it? Oh yes, that’s real. How about a pudgy little rodent-like creature with a mouth full of sharp teeth and elephants as its closest relative? Hello, rock hyrax. We recently asked Atlas Obscura readers in our Community forums to tell us about the most shocking and unbelievable animals they’d ever heard of, and the responses were both truly insane and delightfully based in reality.

Check out some of our favorite bonkers-but-real animals below, and if you know of an another that seems like it can’t even be possible, tell us about it in the forums, and keep the conversation going! No need to look to the shadows for fantastical beasts, the real ones are unbelievable enough as is.

“Colonial organisms, in general, are amazing. It’s like a bunch of organs with specialized functions, all with their own nervous system, got together and decided to be a bigger creature.” — Sluagh

“This jellyfish doesn’t mean to brag, but it’s both beautiful and immortal. If it gets sick, or even stressed, it just reverts into it’s younger self so it can get strong and mature again, bouncing between youth and adulthood forever.” — tralfamadore

“Hydropotes inermis more people need to know about these saber-toothed deer. When I first saw them, I totally thought they were photoshopped.” — Monedula

“I just can’t get past these guys.” — jonathancarey

“I would not be surprised if it was the inspiration for Gizmo from Gremlins (before the change), the Ewoks, or Gollum.” — AnyaPH

“The aardwolf (Proteles cristata) is a small, insectivorous mammal, native to East and Southern Africa. Its name means ‘earth-wolf’ in Afrikaans and Dutch.” — Brawler9

“I find all species all fascinating, but to me the one that blows my mind has got to be the axolotl. This critter has a very special place in my heart as I worked in its conservation in Mexico. It is awesome for many reasons. It was worshipped as the manifestation of the Aztec god, Xolotl, it typically spends its whole life in a ‘forever young,’ larval tadpole form, it can regenerate its limbs and organs (heart, lungs, eyes, brain, etc.) if they get damaged, and it’s a model organism for studying treatment and cures for degenerative diseases like cancer, heart disease and injuries such as third degree burns.” — Monsieur_Mictlan

“The Glaucus atlanticus, it’s a sea slug that looks like a tiny dragon!” — sandradewit89

“OMG, the sea sapphire, hands down. It’s one of the most beautiful animals I’ve ever seen, plus it’s invisible like half the time. They’re a type of crustacean known as a copepod and run just a few millimeters long—squee! Thanks to layers of honeycombed crystal plates inside their cells, they can wink from iridescence to invisibility in a matter of seconds. Sea sapphires often cluster by the surface of the water, making the ocean appear studded with a galaxy of diamonds. Japanese fishermen called these convergences ‘tama-mizu,’ or jeweled water.” — sabrinaimbler

“They keep most of their organs in their legs. And they’re just the creepiest arachnids ever, which is quite an achievement.” — Svenna

“They look like actual dinosaurs. I had to look twice when I came upon one at the San Diego Zoo to be sure it was real. They live in African grasslands.” — digitaldraco

“I was deciding between thorny devils which shoot blood out of their eyes; gastric brooding frogs, which swallow their eggs and regurgitate them as babies; and the peacock mantis shrimp which can shatter fish tanks by clamping its inch long claws. But I feel like the hairy frog deserves some loving. The hairy frog gets its name from vascularized, hair-like appendages that sometimes grow on males. In addition to the horrifying appearance the ‘hair’ gives them, when threatened, they can break the bones in their fingers to push out as claws to defend themselves. Pretty metal.” — laurelkastner

“PEACOCK SPIDERS ARE AWESOME. We had an Australian Museum travelling show at our local museum and although I knew about them, I utterly fell in love with them… I came up with a (sort of) simple puppet version for kids to make at an art station, scaled up by 10. Some of the most successful ones even used similar leg colourings as there are so many species. I still have one attached to the rearview mirror in the car and usually it just jiggles about provocatively but if you take a certain corner on the way home, at a certain time of the afternoon, it’s shadow runs sideways along the dashboard, which I find hilarious. The kids’ friends, not so much.” — Persey

“How I lived so long and didn’t, until recently, know such a bird existed is beyond me. Looks like something a child with a big imagination might draw. I really want to see one.” — mbarretdaw

“As soon as I read the title of this thread I thought of the mantis shrimp. Specifically that piece by The Oatmeal. That creature has so many superpowers, I can’t even get my head wrapped around it. One of which is seeing colors that we humans cannot even imagine that are in existence!” — kmarley38

“How about some love for the rock hyrax? Beyond having an amazing name and brilliantly strange family tree, the rock hyrax looks like a cute and possibly cuddly groundhog. Though sometimes, when challenged for food or territory, he may show you a different side… The rock hyrax is native to Africa and the Middle East and amazingly enough, is most closely related to the elephant. Yes, you read that correctly, this little guy is related to elephants. Rock on rock hyrax!” — Megs0101

“It’s technically a colony of microorganisms in the sea, but a pyrosome is a phenomenal groupthink organism. Imagine scuba diving and seeing this thing wriggling in front of you.” — Bowlbasaurus

“These little nocturnal animals look like a panda/mouse/alien hybrid.” — kfidei

“Jerboas are tiny little kangaroo-bunny-mice that use their little pom-pommed tail for balance while they bounce around deserts at speeds of 15 mph. They live in burrows, often have four homes (fancy!) and clean themselves by having dust baths. There are different kinds, but they all absolutely look like a creature I would have made up as a child. Can you get any cuter than this?” — rozanna

“When first I saw these strange creatures writhing on a large piece of driftwood cast upon a desolate beach, I wondered if it were an alien encounter. I survived, and only recently discovered that they’re crustaceans.” — rossau

“What, no love for the platypus? Proof that God gets high on occasion? Seriously. It lays eggs. It produces milk for its young. It has a bill loaded with sensors that can pick up a worm’s electrical field under the mud. It has webbed feet and a beaver-like tail. The males have venomous spurs on their rear ankles!” — La_Belle_Gigi

“When it comes to birds, it’s definitely the frigate bird. Just looking at pics makes me wonder if these birds try to ‘out-pouch’ each other, I mean how big can that pouch get?” — CDVV86

“For sheer bizarre looks, I’d have to also nominate the geoduck (pronounced more like ‘gooey-duck’ than ‘gee-oh-duck’). It looks like an aroused stallion got dismembered by a big clam.” — alboss

Fantastic beasts and where you found them.
animals

Tell Us About the Greatest Animal You've Met While Traveling

Doggos, cat babies, and all creatures that just have a good spirit are welcome.
maps

We asked you to create your own ideal island, and you did not disappoint.
machines

His collection of scary-looking headgear from the past is sure to get into your head.
Video • Wonder From Home