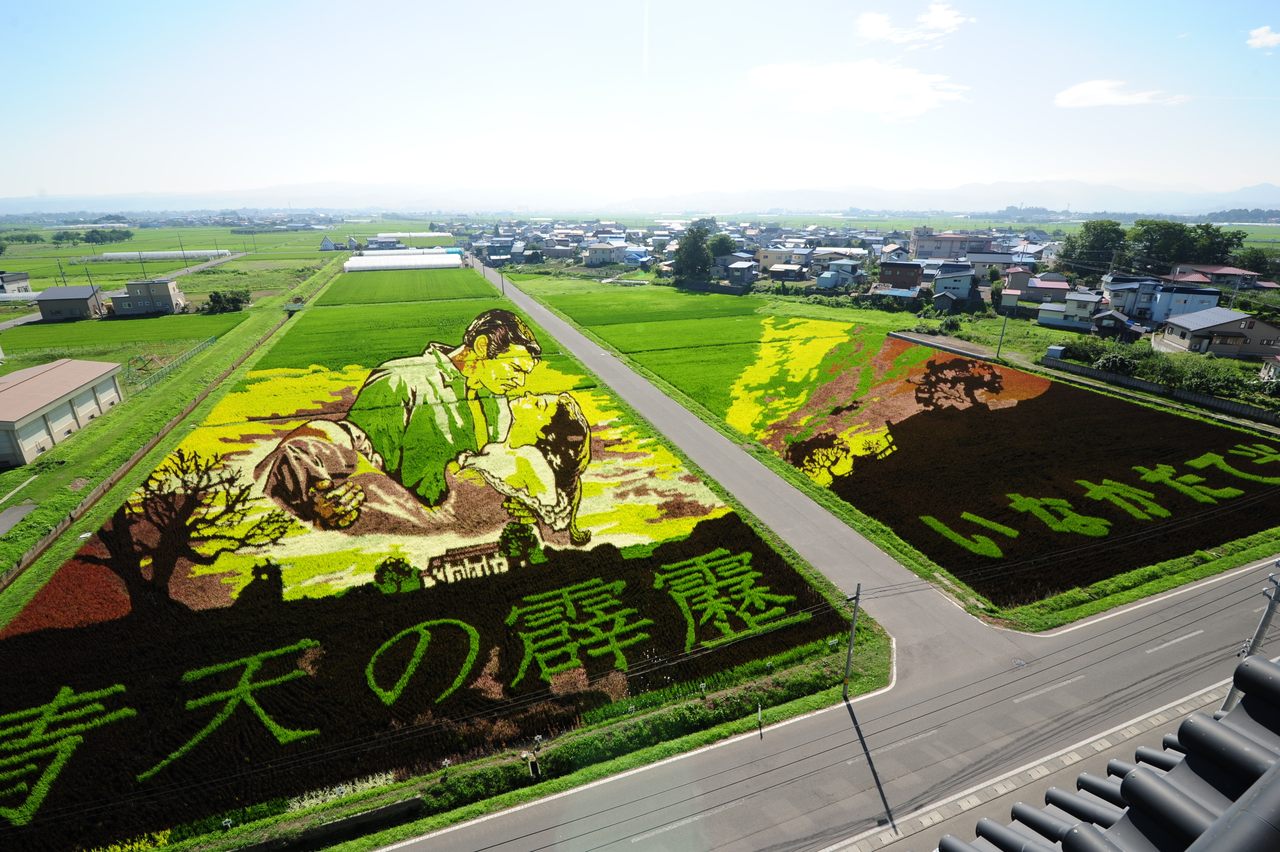 A scene from Gone With the Wind, in rice. Courtesy of Inakadate Village
In This Story
Place

Stalks of green, yellow, creamy white, pale red, and deep purple bend gently in the breeze. I’m standing in a lush, midsummer rice paddy, but the intelligent design of these colorful crops becomes apparent only when I ascend the nearby observation tower.

Back in the spring, hundreds of volunteers meticulously planted these shoots to create, over a period of several months, a huge living canvas on which a painting materializes. This year, it’s a scene from Itomichi, a locally made film about a girl who plays the Tsugaru shamisen, a popular, three-stringed folk instrument.

“Before rice paddy art?” asks Fumihito Suzuki, who works at the local tourism department. He has a gentle, lilting Aomori accent. “This was a rice farming area with no tourism and nothing to see.”

Well, not nothing. Here, in the village of Inakadate, there is wind and rain, clouds and mountains, owls in the forest and frog song in the rice paddies. But now we’re standing at the edge of an emerald green swath, the product of countless hours of labor, unrolling across the landscape to Mt. Iwaki in the distance. It’s definitely not nothing.

Like much of rural Japan, Inakadate has a shrinking population. “My rice field used to be worked by my husband, but he passed away and now I’m working it,” says rice farmer Hisako Sasaki. Inakadate has fewer than 8,000 residents, mostly farming families whose younger members leave to find work in cities. Of those who remain, “There are a lot of people who aren’t getting married,” says Sasaki, with a pointed look at Suzuki. “My daughter is one of them. There aren’t any children in the neighborhood, except for an occasional middle schooler.”

This demographic crisis, coupled with the village’s mounting debt, prompted administrators to get creative. How could they revitalize the village? They looked around at what they had: rice, which has been cultivated here for at least 2,000 years and stretches as far as the eye can see.

“If there’s something that differentiates us, that we can say, ‘this is Inakadate,’ then the population might increase,” says Sasaki. After all, she adds, “It’s calm and there are no mudslides, it’s quite livable.”

At the time, elementary-school students were planting heirloom purple and yellow rice, and green everyday rice, in a striped pattern. “The person in charge at town hall saw this and wondered if rice could be planted with words and pictures,” says Suzuki. Tanbo, or rice-paddy art, was born.

That was 1993. According to Sasaki, a few hundred villagers planted a simple triangular shape to represent Mt. Iwaki. It was a modest success, with a clear design and a few spectators. But it didn’t generate much revenue.

Each year, the designs became more elaborate, intricate, and imaginative. The village council plans the theme a year in advance, and former high-school art teacher Atsushi Yamamoto creates the design with careful attention to gradation and perspective. “Using a computer image-processing software, I make changes as I plan the design,” he says. “The original image may be a photograph or a detailed graphic, and may use hundreds or thousands of colors … all that is reduced to around seven colors of farm field rice.”

Nowadays, around 1,300 mostly local volunteers do the work of planting two different images across two sites. Planters receive lunch, and at harvest time, the rice is distributed to attendees. The main rice used for the background is an everyday variety called asayuki, plus three heirloom varieties and six genetically modified strains. The heirloom and GMO strains are edible, but may not suit modern tastes. “Though heirloom rice may not be tasty, if you make it into ohagi, it has a sticky consistency resembling mochi and is pretty good,” says Sasaki.

The world has taken notice over the past quarter century. These paddies have hosted scenes from Star Wars and Gone with the Wind; they’ve depicted samurai and Hokusai’s famous wave woodcut and anime characters and Marilyn Monroe. The village built an observation tower that charges 300 yen for admission, and local shops sell food and souvenirs. At its height, 2016’s Godzilla rice field attracted 340,000 visitors. And despite copycats popping up in rice regions across Japan and even China, the village topped 200,000 onlookers in 2019. The population is still slowly declining, but in 2019, the village debt of around $30 million was roughly a third of what it was 10 years ago.

Then came COVID-19. So, in 2020, the village abandoned their plans and planted a simple, encouraging message: “One for all, all for one.”

For 2021, the village decided to plant at one site. The scene from Itomichi is locally meaningful: The director and star are from Aomori, and all scenes were shot on location in the prefecture. There’s a Itomichi selfie display in the tourist center, posters in the train station, and even one in the coffee shop where I stopped for breakfast. But the viewing tower is closed. The village invites people to instead track the art’s progress via its live camera.

“Rice-field art has become synonymous with Inakadate,” says Suzuki. “Next year, we’d like to go back to planting both sites. The vaccine rollout is progressing, so we hope that people can come and see it with their own eyes.”

What the residents of Inakadate have achieved is remarkable: Multiple decades of town-wide dedication has made their obscure village internationally known, bringing in much-needed revenue. But, Suzuki says, the population remains in decline; children are an even rarer sight than when they started planting. “At this stage, there’s no breakthrough, and we’re doing everything we can to counter the decrease.”

One baker treats tahdig as a blank canvas.
art

Guorui Chen brought a hometown tradition back from extinction.
food

How an Ancient Indian Art Utilizes Mathematics, Mythology, and Rice

In 2022, we covered the world’s most creative cuisine.
List