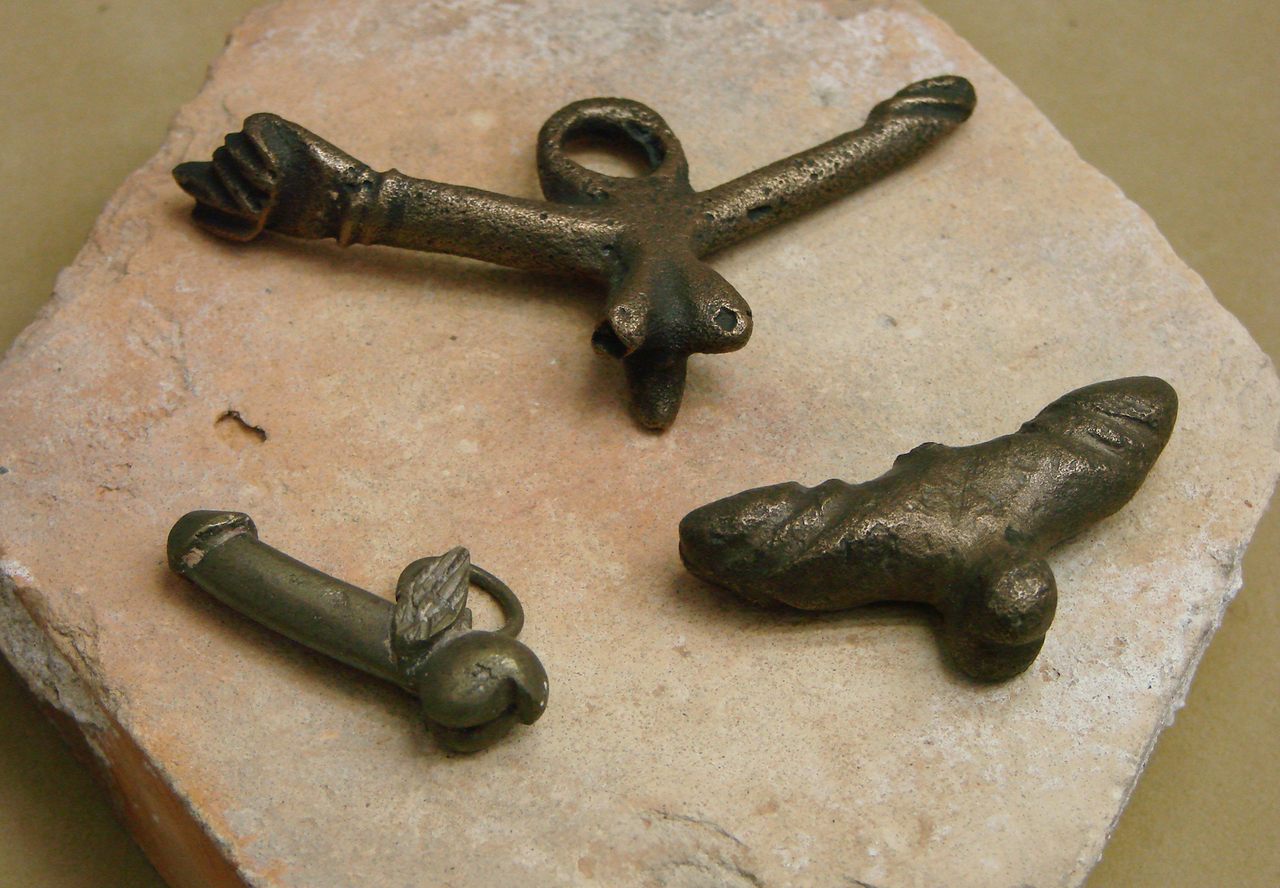 Some fascina in the Musée Saint-Remi in Reims, France. Vassil
In This Story
Destination Guide

Centuries ago, before modern medicine, in a time when humans fought disease and sickness in more, uh, mystical ways, ancient Romans centered on a solution that today might get you reported, or at least looked at askance: amulets for you and your children shaped like giant penises. The amulets—and also, frequently, wind chimes—were shaped like a fascinum, or a divine penis, to ward off disease and the evil eye.

But they were used for more than that, too, as ancient Roman boys also wore the amulets, called bullae, to indicate their social status (like whether they were slaves or free boys), while young girls had a similar counterpart. In order to increase the efficacy of a bulla or another adornment, such as a kid’s ring, they were crafted into the shape of, or adorned with, giant penises.

“The sexual energy of the phallus was tied directly to its power in reproduction,” according to classicist Anthony Philip Corbeill. The fertile power of a phallus, it was thought, would keep them safe.

This was important, primarily because in the Roman world, children were exceptionally vulnerable to sickness, with up to half of all Roman children dying before the age of five, according to the Journal of Interdisciplinary History. Which made it understandable, then, that mothers resorted to magical methods to protect their offspring.

But, as Pliny the Elder noted in his Natural History, fascina weren’t just limited to kids: “Infants are under the especial guardianship of the god Fascinus, the protector, not of infants only, but of generals as well.” Which means that when a general was parading through Rome in triumph, surrounded by booty and slaves, he’d likely also have a fascinum hanging on his chariot. Or, as Pliny described: “It is the image of this divinity that is attached beneath the triumphant car of the victorious general, protecting him, like some attendant physician, against the effects of envy.”

Other fascina are double-headed. One side of the amulet is a penis, the other a clenched fist. What does the latter symbolize? A fist with the thumb thrust up between the index and middle figures is often called the “fig,” or mano fica. It’s a dirty thumbs-up that’s symbolic of a penis and genitalia in general; so carving both a talisman with both a fascinum and a “fig” on it would make this twice as powerful at warding off evil.

And then there are the penis bullae with wings carved on them (cue the Red Bull ad here). Why turn a fascinum into a half-genital, half-bird hybrid? Flying capabilities made them more effective threats—and thus better protectors—against invidia (envy, or the evil eye), but they were also a throwback to the ancient Greeks, from whom the Romans co-opted some cultural and religious ideas. In this case, it might’ve started with language. “The Greek word for ‘wing’ also served as a euphemism for phallus,” Erich Segal wrote in The Death of Comedy. This pun also rears its head in Plato’s Phaedrus, in which Eros (erotic love) has to grow his wings before he can “take flight.”

As a result of the fascinum’s effectiveness, Pliny claimed its worship formed “part of the Roman rites.” Its worship was “entrusted to the Vestal Virgins,” the chaste priestesses of the goddess Vesta. It might seem a bit odd to give a giant phallus monument to virgins, but the Vestals were actually all about fertility. As the classicist Mary Beard noted in a 1980 article, “it seems as if the virgin was not looked upon as sterile but as a mediator of stored up, potential procreative power.”

And, today, fascina live on in the English language, in the word “fascinate.” If you’re fascinated with something, in other words, you might just be thinking that it looks like a penis.

But it won't taste good.
objects of intrigue

Put something complicated, useful, and stylish on your finger.
objects of intrigue

The Dormouse-Fattening Jars of Ancient Rome

For the plumpest, tastiest rodents.
Video • Object of Intrigue

4:00
Want to see fewer ads? Become a Member.
From Around the Web
Atlas Obscura Trips
Culinary Naples: Producers, Purveyors, and Pizzaioli
View This Trip
Thanks for sharing!