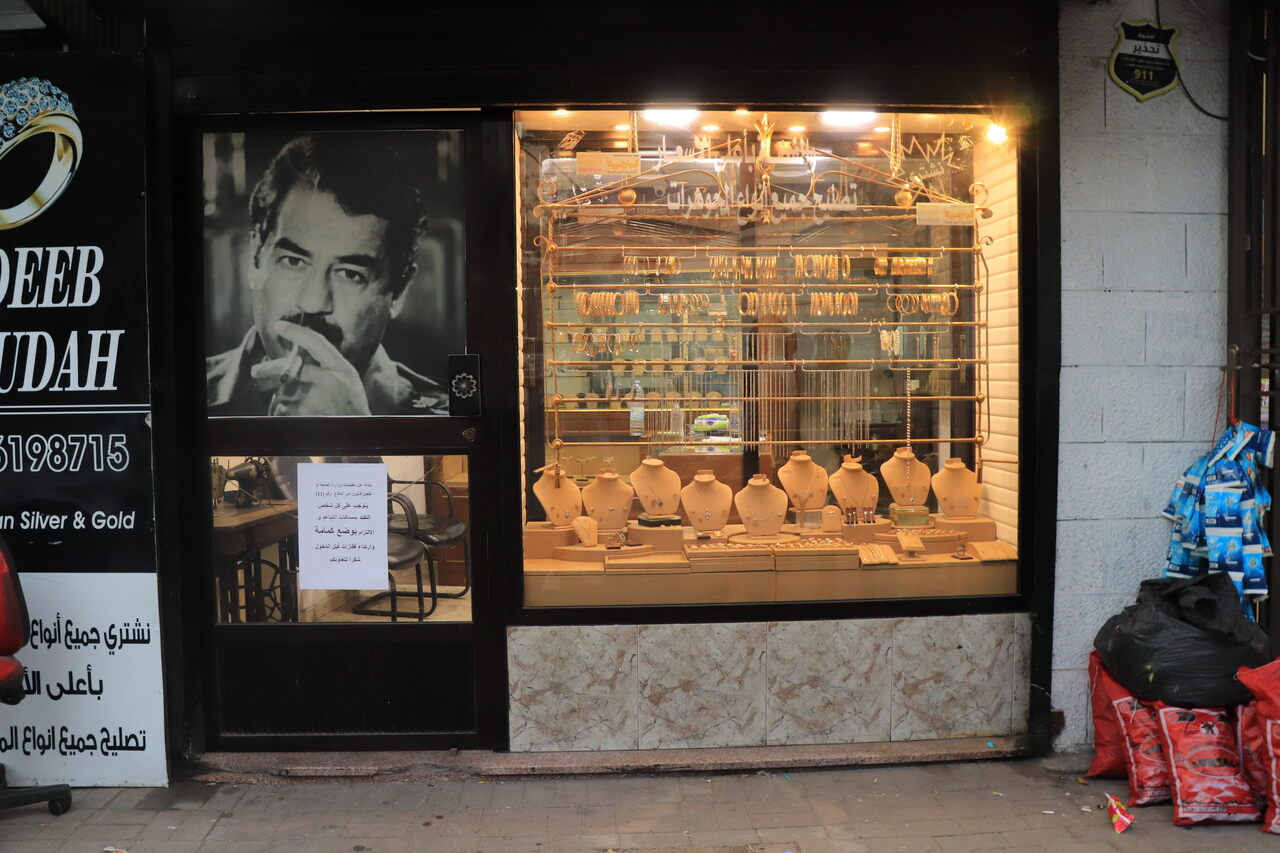 Saddam Hussein's face decorates the door of a gold shop in the Jabal Amman neighborhood of Amman. The owner, Adeeb, says his father studied in Baghdad before returning to Jordan and joining the intelligence service. Jason Ruffin
In This Story
Destination Guide

In a yellow taxi in the Jordanian capital of Amman, a photo of Saddam Hussein dangles from Mustafa Khalid’s rear-view mirror. The dictator’s face is printed on one side of an air freshener; the other side shows Jordan’s late King Hussein. As Khalid drives through the packed city streets, the two faces seem to trade places.

Before long, another image of Saddam appears, this time on a bumper sticker on a nearby car. Khalid, a 27-year-old Palestinian Jordanian, gets excited: “Look, look, there’s another one!” His eyes show wrinkles when he smiles. When asked about the former dictator’s continued popularity, Khalid says that there are two sides to every story. “Saddam on one side is a hero,” he says. “From another side he is a killer. How is that?”

Seventeen years after the U.S. invaded Iraq for the second time, and 14 years since Saddam was executed by hanging, his face can be spotted on everything from cars and posters to playing cards and watches in neighboring Jordan. In 2010, a local town almost sparked a diplomatic row with Kuwait after it attempted to name a street after Saddam. (They later reversed the decision and asked locals to name their sons Saddam.) In 2019, Jordanian soccer fans made headlines when they chanted the dictator’s name at a match between Jordan and Kuwait. There’s even an Instagram account dedicated to spotting his likeness around Amman.

Jordan is a politically moderate country and an important U.S. ally, and most Jordanians view America favorably. Young Jordanians listen to American music, eat at American fast food chains, and wear American brands. Many families, especially of Palestinian descent, have relatives living in the U.S. With this in mind, the continued prominence of Saddam Hussein may come as a surprise.

Khalid’s own father spent 14 years in the U.S. working with the Red Cross, and eventually opened his own shop in Louisiana. His father remarried while he was there, and he was even working on Khalid and his siblings’ immigration papers before he passed away. Khalid says that his father loved the U.S. and envisioned his children moving there.

Khalid pulls into a roadside coffee shop to buy some water. Amman is experiencing a heatwave, and temperatures have hit triple digits every day for the past week. He asks the owner, an older gentleman, what he thinks about Saddam Hussein, and the man points to a neighboring shop. There, the man suggests, we’ll find one of the many Jordanians who are nostalgic about a notorious leader.

The walls of the shop are decorated with daggers. At the mention of Saddam, the owner, Zaid Mohisan, offers tea in English. Behind the counter, a lanyard from the U.S. embassy hangs on the wall. “He was the most honest person in the whole area,” Mohisan says. “Saddam Hussein was helping Jordan as much as he could, and most of his gifts that came from Iraq were for all the people and not for the government.” Saddam was not just strong, but he was a man, Mohisan tells us.

Saddam’s popularity does not seem to be dependent on gender or age. Hala Al-Shwayat, a 23-year-old broadcast journalist, says Saddam’s persona convinced some Jordanians that he was their only voice in the region. “Some people that attended school with me to get their masters degree, they look up to him like some kind of hero,” she says. Her own parents’ view of him, initially unfavorable, altered dramatically after he died and a video of his execution was leaked. Around Eid al-Adha that year, when Saddam’s sentence was carried out, the atmosphere around her house was somber.

It’s no accident that Saddam is depicted here as a hero and a strong leader, and that his ubiquitous image makes him look almost like the revolutionary leader Che Guevara. Saddam’s popularity in Jordan stretches back decades. According to Iraqi analyst Mohammed Al-Waeli, Saddam made sure to woo those who did not have to experience his regime first-hand. “He had a very strong propaganda machine,” Al-Waeli says. “He actually networked with Arab journalists, Arab actors, and celebrities.” Saddam’s international activities date back to 1979, when he first seized power in Iraq and looked for allies that could lend him legitimacy. He offered cheap oil, education, and jobs to Sunni-majority Jordan. The Jordanian government, in dire need of energy and strained by an influx of Palestinian refugees, had much to gain from a close relationship with Iraq. In 2003, members of Saddam’s family even fled to the kingdom.

Even as Saddam portrayed himself as a hero, he initiated brutal campaigns in his own country, even using firing squads and chemical weapons against Iraqi Kurds. After the 1991 uprisings in Iraq, his regime also destroyed Shia holy shrines, killed religious authorities, and disappeared family members. Some of these atrocities were buried for decades under the immense weight of Saddam’s propaganda machine. “Come to Iraq and ask any family about Saddam,” Al-Waeli says. “They can tell you countless stories of his atrocities, yet nothing is documented, or not much is documented.”

After the U.S. invasion of Iraq, the country eventually slid into violence and chaos. Iraq’s recent struggles have impacted Jordan, too: The flow of cheap oil dried up, and so did the supply of Iraqi jobs. Some Jordanians take this as a sign that Saddam was responsible for maintaining peace. “There were some people, especially the younger generations—they did not have an understanding of Saddam’s atrocities. They were just hearing that it was stable at that time,” Al-Waeli says. “They were yearning for something that they didn’t even live with. They didn’t understand the hunger, they didn’t understand the fact that you were denied everything.”

Khalid studied to be a nurse, but he became a taxi driver because of oversaturation in the sector. In a country that had a 19 percent unemployment rate even before the coronavirus, his story is a common one. “From one side, Saddam was helping Arab countries, and from another he was very tough on other religions,” he says, while swerving through the Hashmi Shamali area of Amman. “That was so wrong, you can’t judge anyone for their religion, even if they don’t have a religion.” This area is home to many refugees from Syria and Iraq, and it is normally packed, but few people have decided to brave the heat. Khalid ducks into a residential area in search of passengers.

Khalid Zaqo, an Iraqi Christian from Nineveh, flags down the taxi from under the scant shade of a tree. He remembers the Saddam era and says he fled to Jordan four years ago, after a group of men spotted a cross hanging from his rear-view mirror. The men kidnapped Zaqo and only released him after he gave them his car, he says. Fearing for his family’s safety, he decided to sell everything and leave.

Zaqo’s broad shoulders sway with the teetering of the taxi as the small car nervously takes corners, climbing up and down Amman’s steep roads and pushing through the dense heat of the sun. When asked about Saddam, he says, “Some parts say they wish he rests in peace, and in some parts not.” He lists the many wars that prevented him from finishing his studies: the Iran war, the American war, the Kuwait war. Jordanians, he says, reminisce fondly about Saddam because of his perceived stance with Jordan. “I used to love him, but because of the wars he destroyed generations,” Zaqo says. “He destroyed them for wars.”

Man and myth are easily muddled. In Jordan, where war in neighboring countries has come to seem like commonplace, it’s possible for people to yearn for something they only saw the half of. But Zaqo seems unsentimental about the past. “The country will never be like it was during that time,” he says. “Saddam is gone and there is nothing. Everything is ashes after him.”

Follow in the footsteps of James Baldwin, Josephine Baker, and Langston Hughes.
art

It may have been crafted for the Qianlong emperor more than 275 years ago.
art

How an Agoraphobic Traveler Wanders the Earth

When anxiety set boundaries on her life, this adventurer found solace and excitement in Google Street View.
Video • Gastro Obscura