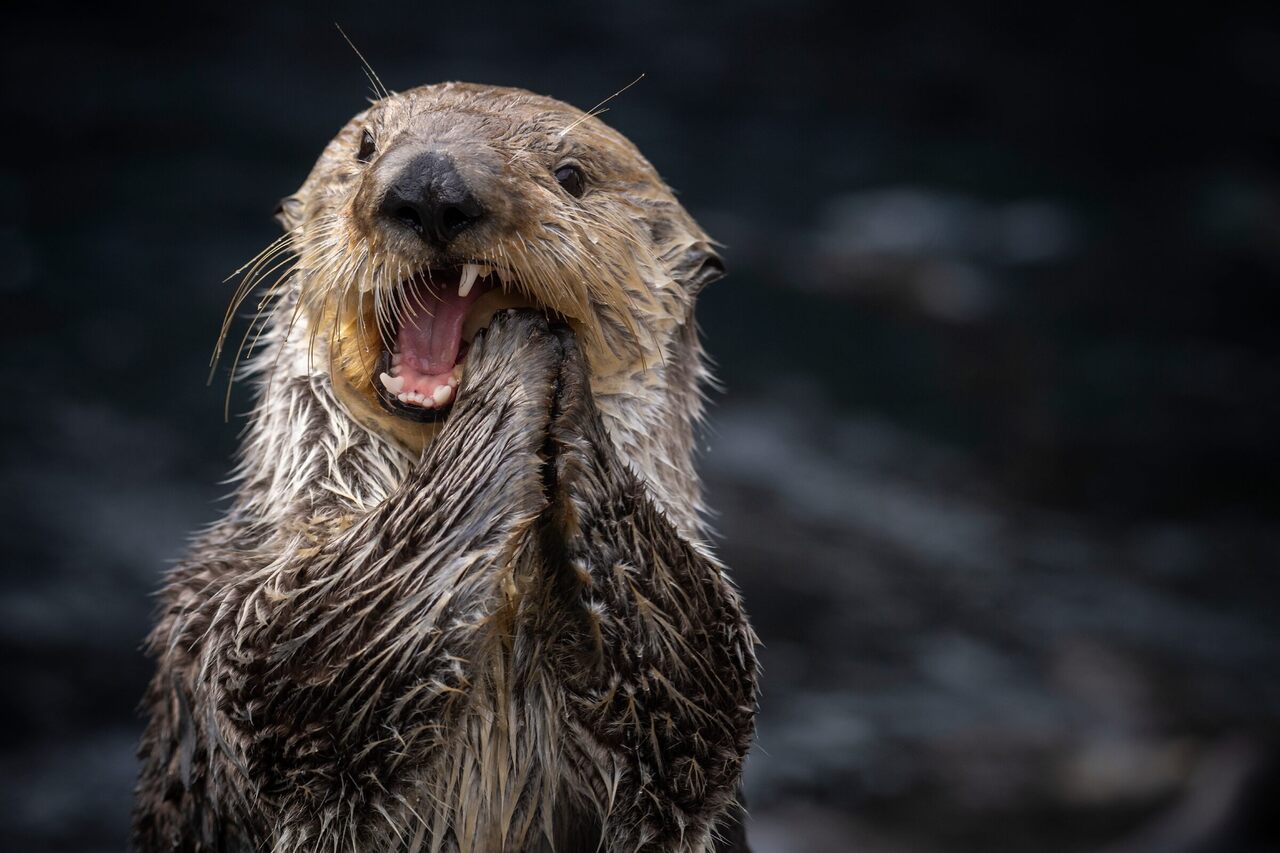 That mouth is full of info for scientists to chew on. Monterey Bay Aquarium
In This Story
Destination Guide

The mouth of a young sea otter isn’t a particularly gnarly place. They don’t have many teeth—somewhere between six and 10 at birth, including four canines and two incisors—and they tend to be pretty pristine, like porcelain. But things go downhill fast. Aging sea otters have plaque-like buildup around their gums. Their teeth may get stubby and nubby from years of chewing on hard-shelled food. Or the teeth may be pitted, fractured, or knocked out entirely, leaving behind exposed roots and fostering bacteria that lead to a foul, septic stench. Toward the end of their lives, says Karl Mayer, a sea otter field response coordinator at Monterey Bay Aquarium, “You wind up with animals that have pretty horrific mouths.”

Mayer’s job often involves poking around in sea otters’ maws, while wearing puncture-proof Kevlar gloves. He thinks it’s worth it. Along with eight collaborators at the aquarium, the U.S. Geological Survey’s Western Ecological Research Center, University of California, Santa Cruz, and Duke University, Mayer recently published a paper in the journal Ecology and Evolution arguing that researchers who want to gauge an otter’s age would be well served to take a look at its teeth.

Knowing an animal’s age helps researchers shape questions about both individual creatures and entire populations, from reproduction rates to life expectancy. The tricky part comes when scientists encounter animals in the wild for tagging, but don’t have prior information about them. So before sending the animals back on their way, researchers want to learn as much as possible, as quickly as possible, so they don’t stress the animals too much. In the new paper, Mayer and his colleagues suggest arriving at an estimate by nudging open the mouth and assessing wear and tear. They’ve tried the technique with success on wild sea otters whose ages they already know, and suspect that it would work well on ones of unknown age, too.

Many young animals, from tiny humans to fuzzy ducklings, look quite different than their grown-up counterparts, and the same is true for sea otters. Pups are smaller and uniformly muddy-colored; the species’ characteristic “grizzle,” or speckling of lighter-colored patches, develops later. Older females may have scarred noses, because their mates nip them as they do the deed, while older males tend to get beefy around the neck or upper body. But beyond that, age is hard to assess at a glance. “The difference between very young animals and adults is fairly dramatic,” Mayer says, but age differences among adult otters are harder to parse, “much as it would be hard to tell the difference between a 28-year-old man and a 35-year-old man just by looking at them.” The paper’s authors considered factors including coloration and those nasty nose scars to gauge the age of 761 otters encountered over 34 years, but they had the best luck with teeth.

Researchers have used sea otters’ teeth as an age indicator for decades—but typically it involved yanking out a tooth under anesthesia and then examining the build-up of cementum, a calcified substance that grows each year, like toothy tree rings. (Otters’ teeth aren’t the only cementum troves: Researchers from the Wisconsin Department of Natural Resources and Iowa State University recently studied cementum annuli in the incisors of white-tailed deer, too.) In otters, the extracted tooth was generally a premolar—the first one behind the canine and the smallest of those in a sea otter’s mouth. The idea was that, if you’re going to defang a carnivore, you ought to leave its strongest assets behind. More recently, though, researchers in California have veered away from this approach, Mayer says, both because they learned that the buildup isn’t equal every year and because it seemed invasive and potentially harmful. “It was thought that its extraction would at least affect the otter’s ability to forage,” writes Teri Nicholson, a biologist at the Monterey Bay Aquarium and the paper’s lead author, in an email. Researchers studying sea otter populations in Washington, Canada, Alaska, and Russia still use cementum as a proxy for age, Nicholson adds.

Peeking into an otter’s mouth isn’t so tricky when the animals are pups. Those spend most of their time floating on the surface “like little corks,” dependent on their mothers or human handlers for food and grooming, Mayer says. They “have a lot of gum and not much tooth in the mouth,” he adds. “Not a lot of weaponry for them to bite you.” But as they age, more teeth erupt—typically farther back in the mouth, which is harder to see—and run-ins with human fingers get a lot more painful for the humans, which is where Kevlar or leather gloves come in. A researcher might only have a few seconds before things get hairy (or toothy). Scientists often place the older otters under anesthesia even to get a look inside.

Otter teeth don’t wear down in exactly the same way everywhere. The degree of bustedness depends, in part, on what they eat. The teeth of otters who use tools to feast on clams tend to hold up better than, say, those of the cluster of otters around California’s San Nicolas Island, who use their incisors to scrape the meat out of spiny red sea urchins. But typically, the researchers found, there is a strong correlation between advanced age and a mouth full of horrors. It would be a lot more complicated if the otters brushed, flossed, and saw a dentist regularly.

The Evolution of a German Town's Centuries-Old Passion Play

The Delicate Art of Identifying Bats By Their Penis Bones

They're roughly the size of a hyphen—which makes them extremely easy to lose.
science

The Long-Term Effects of COVID-19 on Field Science

As scientists wait, worry, and hunker down, they’re also looking ahead to how their projects will need to adapt.
science

Keep an eye out for the giant sea bass's spots.
science

Lactose intolerance was no match for a prehistoric desire for dairy.
Video • Object of Intrigue