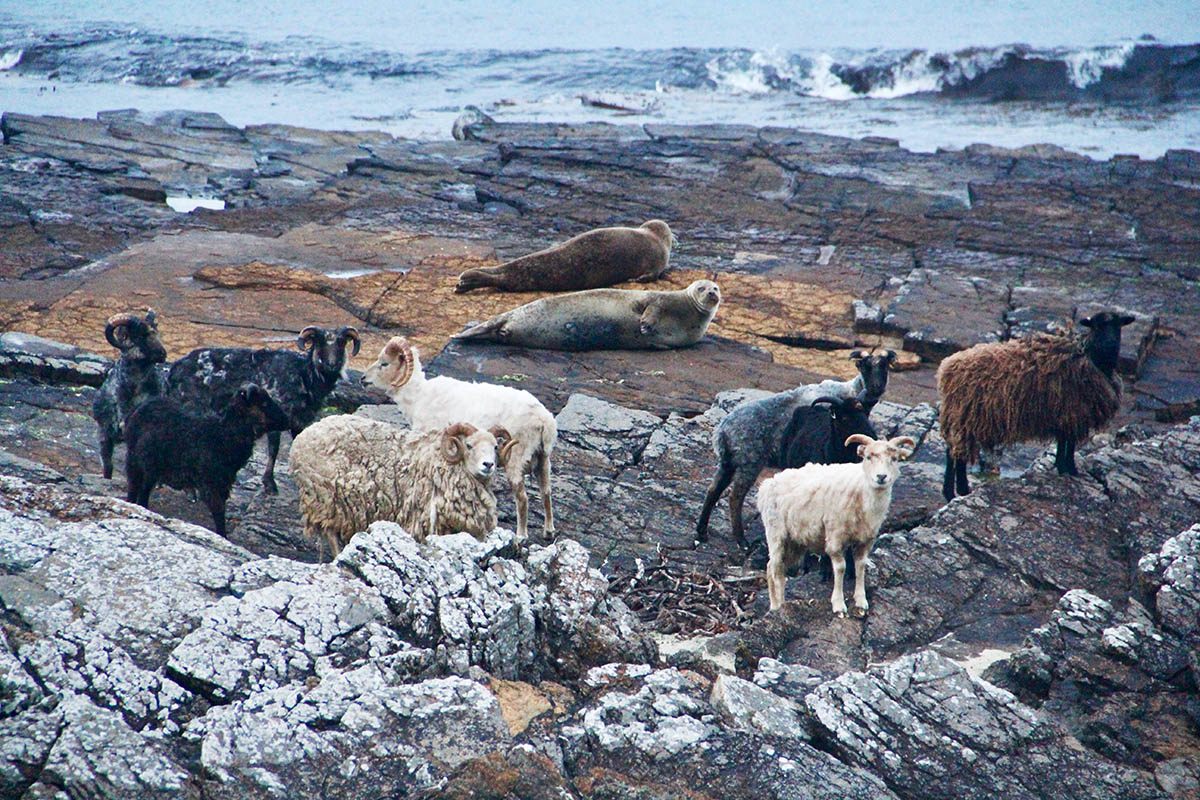 A fairly unusual sight: Sheep share the shore with seals, known as "selkies" in Orcadian dialect. Karen Gardiner
In This Story
Destination Guide

North Ronaldsay, the most northerly of Scotland’s Orkney Islands, shares several properties in common with the country’s other remote northern isles. There’s the Neolithic-era standing stone, for example, and the lighthouse built by members of the famed Stevenson engineering clan. But look out to the shoreline and you’ll spot something altogether more particular to this island. Small sheep—wrapped in thick fleeces of brown, black, white, and gray—nimbly pick their way across sand and wet rocks. As waves break close behind them, they pass basking seals and munch on seaweed, thick pieces of brown kelp trailing from their mouths.

A primitive breed, part of the North European short-tailed sheep group, and smaller than most modern breeds, North Ronaldsay sheep have evolved in isolation since their arrival on the island, possibly as far back as the Iron Age. There are currently around 3,000 on North Ronaldsay, grazing all along the coastline and eating seaweed at low tide. Aside from the Galapagos marine iguana, they are thought to be the only land animals able to survive solely on seaweed. This is not just a quirk, but the result of necessary evolution.

In 1832, the island’s laird, or landowner, cleared the land for more valuable cattle and crops. He banished the sheep to 271 acres of shoreline, encircled by a roughly 13-mile-long stone wall known as the sheepdyke. Left with no choice but to adapt to this new stark environment, the sheep survived by feeding on the abundant seaweed they found. They have remained on the sea-facing side of the dyke ever since, fattening up in winter when storms throw plentiful seaweed onto the shore.

Semi-feral, they roam freely but tend to keep to their own patch, or “clowjoung.” For a few days each summer, when the moon is full and high tides limit the space to which they can flee, the island’s sheep are rounded up to be shorn in an event called “punding.” Thought to be one of the last examples of community agriculture in the U.K., the punding sees the islanders help one another to chase their sheep off the shore and into the nine stone “punds,” or pens, dotted around the island.

Once thought to be a burden, the sheep are now crucial to all three main strands of North Ronaldsay’s economy: wool, meat, and tourism. Wool from their double-layered fleeces—coarse on the outside, fine and soft on the inside—is spun at the island’s mini mill and sold around the world as yarn or knitwear. Succulent North Ronaldsay mutton is considered a delicacy for its strong, gamey flavor, even making it onto the Queen’s plate at the start of her Diamond Jubilee tour. Tourism marketing for the island invariably mentions the “iconic seaweed-eating sheep.” The animals are mutually dependent upon humans for their survival, as the U.K’s Rare Breeds Survival Trust lists them as “vulnerable.”

Sheep management is overseen by the Sheep Court. Established in 1839, the Sheep Court was made up of 11 elected crofters (small scale tenant farmers), known as “Sheepmen.” The Court is responsible for managing the grazing, deciding which bits of the dyke need to be rebuilt, and counting the sheep—every household on the island has a certain number they are allowed to keep.

Kevin Woodbridge, a crofter and councilor who arrived on North Ronaldsay in 1977 to work as the island’s doctor, says there is “a need for a revision of how the whole thing is managed.” The island’s dwindling human population—from 500 in the 19th century to around 50 today—means there aren’t enough people in each township to even nominate a Sheepman. In the early 2000s, the laird reconstituted the court so that simply everyone who kept sheep was a member. “But that’s dwindled and now less than 10 people actively keep sheep, and not all of them will come to the Sheep Court anyway.”

When he arrived, Woodbridge says, he was one of only three non-native islanders out of a total population of 160. Now native islanders are outnumbered by newcomers, some of whom have little interest in the sheep. Historically, says Woodbridge, the sheep “glue the island together” because people have to work communally during the punding. “Even though these sheep are individually owned, grazing and building the dyke has always been a communal activity.”

The dyke is critical to the survival of the breed. The sheep do eat some grass from time to time, but their bodies have so adapted to their seaweed diet that eating too much can cause copper poisoning (seaweed inhibits copper absorption). The dyke keeps them off the grassy fields inland and also prevents gene-pool pollution through crossbreeding with other types of sheep kept on the island. In-breeding, however, has not been a concern because fertile rams tend to cross the clowjoung boundaries to mate, according to Peter Titley, Secretary of the Orkney Sheep Foundation.

But this important piece of livestock infrastructure needs constant care. Winter storms batter the dyke yearly and so, historically, the islanders worked together to rebuild the parts that had been blown down. Now, as with the Sheep Court, depopulation is forcing a change to the system.

The island once had a pool of able-bodied people capable of undertaking the hard physical labor of rebuilding the dyke, but now there are only about half a dozen fit enough people left, “and some of them are in their eighties,” says Woodbridge. “The numbers are now so few that it’s difficult to maintain the old system. We need to find a new way of keeping it going forward.”

A solution of sorts has been found in the two-week-long North Ronaldsay Sheep Festival, which brings volunteers to the island to rebuild the dyke. The festival was launched in 2016 and, over the past two iterations, “more than half a mile has been re-built, from scratch, by the festival volunteers,” writes Kate Traill Price, one of the organizers and a descendant of the original laird who banished the sheep, in an email.

Some come for as little as a few hours or as long as both weeks, some with dyke-building experience but many with only an affection for the sheep. The festival coincides with punding so visitors have the opportunity to immerse themselves in the community by helping chase the sheep and clip them before enjoying more relaxed island activities, including traditional dancing.

“The festival is about celebrating the past and looking to the future,” writes Traill Price. But that future remains unclear. This summer, the island’s school lost its only student. Twelve year-old Teigan Scott is moving to secondary school on Orkney’s main island and so, with no other school-age children left, the school has been put on “standby.” Scott told the BBC she felt “sadness because the school will be closing and the island might fall apart” as it becomes more difficult to attract the young families the island needs.

If the island were to depopulate completely, a plan would need to be put in place to maintain the sheep. The island would become “some sort of reserve,” says Woodbridge, “where you have to employ people just to make sure the breed is maintained.” But, he says, “I can’t see that happening. There’s been people living on this island since prehistoric times and things have always gone up and down. It’s going to go up again.”

Regardless, if the festival, held in early August this year, is any indication, the future of the sheep is in committed hands. Volunteers from as far away as Vancouver made the long trip to spend up to six hours a day rebuilding the dyke in ever-changing weather patterns of rain, wind, and sun, their only reward the satisfaction of helping to conserve this very special breed.

On Seeing the Eclipse With a Crowd

What I learned while camping out with hundreds of people in the middle of the Oregon desert.
sheepanimals

For Thousands of Years, People Have Been Obsessed With Fat-Tailed Sheep

When Bighorn Sheep Decide to Cross a Highway

For decades, they stayed on either side of Interstate 40, but those days appear to be over.
animals

A Bunch of Stoned Sheep Might Have Rampaged Through This Village

Two new ones just turned up in a tomb on a remote Scottish island.
Video