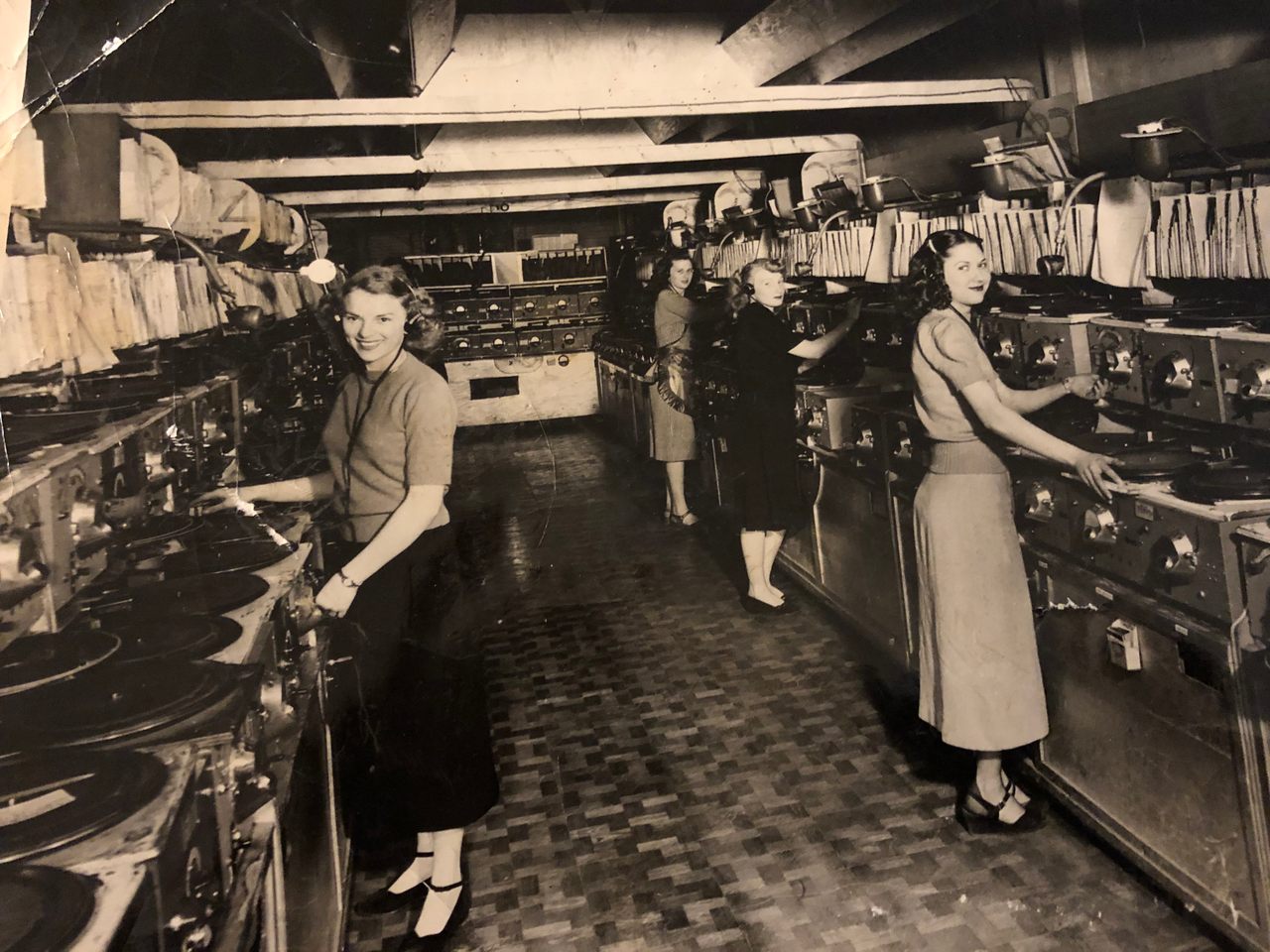 An undated image of women DJs staffing a Shyvers Multiphone studio in the Seattle-Tacoma area. Courtesy John Bennett
In This Story
Place

This Seattle museum displays the history of the telephone through an impressive collection of telecom equipment.
Destination Guide

Loretta Shepard was still a teenager when she started using an alias and talking to strangers in the middle of the night. It was 1953 and Shepard, who called herself Joyce, worked past midnight in an undisclosed studio, operating what was, for its time, state-of-the-art technology. “We were told to give no information of ourselves, so we had to work under a different name,” recalls Shepard, who chose to go by her middle name. “I remember they were real strict about having someone know where you were at all times. It was for our own protection.”

“Joyce” was no Cold War spy, however. She was one of a small army of women in Washington State who worked as DJs for Multiphones, telephone-based jukeboxes. The devices were the Spotify of their day, providing what some might consider to be the earliest form of commercial streaming. Shepard, who worked in Tacoma, says she also on occasion played the role of therapist—especially with lonely servicemen who’d call in as much to hear another human voice as their favorite song.

“If we weren’t too busy, we talked with them,” says Shepard, who still lives in the Tacoma area. “They just needed someone to talk to. We would just listen, you know, [and] be kind to whoever was on the other end.”

The brainchild of Seattle inventor Ken Shyvers, Multiphones came onto the scene in 1939. At the time, jukeboxes were only spinning 20 or so records, at most. Shyvers wanted to expand the playlist, so he created the Shyvers Multiphone: a mini-jukebox, with an Art Deco aesthetic. It stood about 20 inches tall and, during its mid-century heyday, could be found anywhere from diner counters and bars to drive-in theaters.

The machine had over 170 songs to choose from, each one assigned a different number. Customers would use its built-in telephone to connect with the local Multiphone station, filled with records and turntables. A DJ with a friendly voice would be waiting on the other end to answer the call and play the requested record. The stations, located in Seattle, Tacoma, Bremerton, and Spokane, were staffed entirely by women.

“You’d put your nickel [into the Multiphone] and you would hear a hostess from the central station ask through the speaker, ‘what number, please?’ And you’d say, I want number 202, ‘Fools Such As I.’ And then they’d grab the record from the rack, put it on the turntable associated with the location you were at, play it, and that was it,” says Seattle historian John Bennett, author of the upcoming book The Shyvers Multiphone Story. Bennett, who runs Jukebox City, a vintage jukebox business in the Georgetown neighborhood, is a Multiphone collector himself. A self-proclaimed antique hoarder, Bennett bought around 500 Multiphones in the 1980s, which he sold at an antique shop he owned at the time. Back then Multiphones only sold for $100 a pop—today, they’re much rarer, and can go for over $2,000.

While Shyvers certainly enhanced the technique, listening to live music over the telephone was nothing new. The first live streaming system, the theatrophone, was invented in France in 1881. The coin-operated wall phone was set up in hotels, cafes, and clubs, among other locations across Paris, and broadcasted live opera, theater, and news programs at five-minute intervals. Sounds were transmitted via cable wires running through the sewer system. The so-called wired music fizzled in the early 20th century as record-playing jukeboxes and radio became more widespread. However, it had a resurgence in the late 1930s.

“Sound quality on phone lines was better at that point and in 1940 the big jukebox manufacturers were pretty much thinking well, phonograph jukeboxes are obsolete, and if I don’t get on board with this wired music, then I am going to be left behind. So basically, everyone jumped on board and made their version of it,” says Bennett. “The difference with Shyvers was that he invented the Multiphones, and he produced and ran them himself, so he was the total proprietor of everything. But since he was kind of a small-time guy, he just operated in the Northwest.”

Shyvers Multiphones not only brought a wider music selection to Washington’s business establishments; it also brought employment for the scores of women who took phone requests at the stations. Like Shepard, many of them were young. “It was actually my first job. I was a senior in high school and worked there for a year,” says Shepard. She adds nonchalantly, “It was a job. It kept money in my pocket.”

Since most of the music requests came from bars and restaurants, hours ran late. On Fridays and Saturdays, Shepard’s shift would typically finish at 1 a.m. “My husband, who was my boyfriend at the time, would come pick me up,” she says. Though the women were instructed not to engage in phone conversations with patrons, it happened more often than not. To keep their identity protected, Shyvers had them choose a microphone name and made sure to keep the station locations a secret. Still, this didn’t stop some male admirers, mostly sailors on shore leave, from leaving roses and boxes of candy outside the studio door. Sometimes they’d even propose marriage to the women over the Multiphone.

At the height of their popularity, Multiphones could be found at 120 locations throughout Washington. Then, says Bennett, other companies “came out with these really great stereo jukeboxes and Shyvers just couldn’t compete with them.” By 1959, Multiphones were obsolete and Shyvers pulled them off the market. Most surviving machines are in private collections, though there is a Multiphone on display at Seattle’s Connections Museum, which showcases antique telephones and related equipment.

“The Multiphone really was an early version of streaming music,” says Peter Amstein, president of the nonprofit Telecommunication History Group, which runs the museum. Amstein plans to eventually make the Multiphone light up and play music again, like it did in its heyday. “It’s a really nice artifact to be able to display at the museum,” he says. “It was a pretty crazy invention for its time.”

How the once-ubiquitous convenience became a rare museum piece.
food

Before your favorite tools, cooking was hell.
music

Sessions in a Tokyo hotel room with a sound engineering pioneer captured a nation in transition.
food

The biggest names in Japanese technology vied to bring them to market.
Video • Object of Intrigue