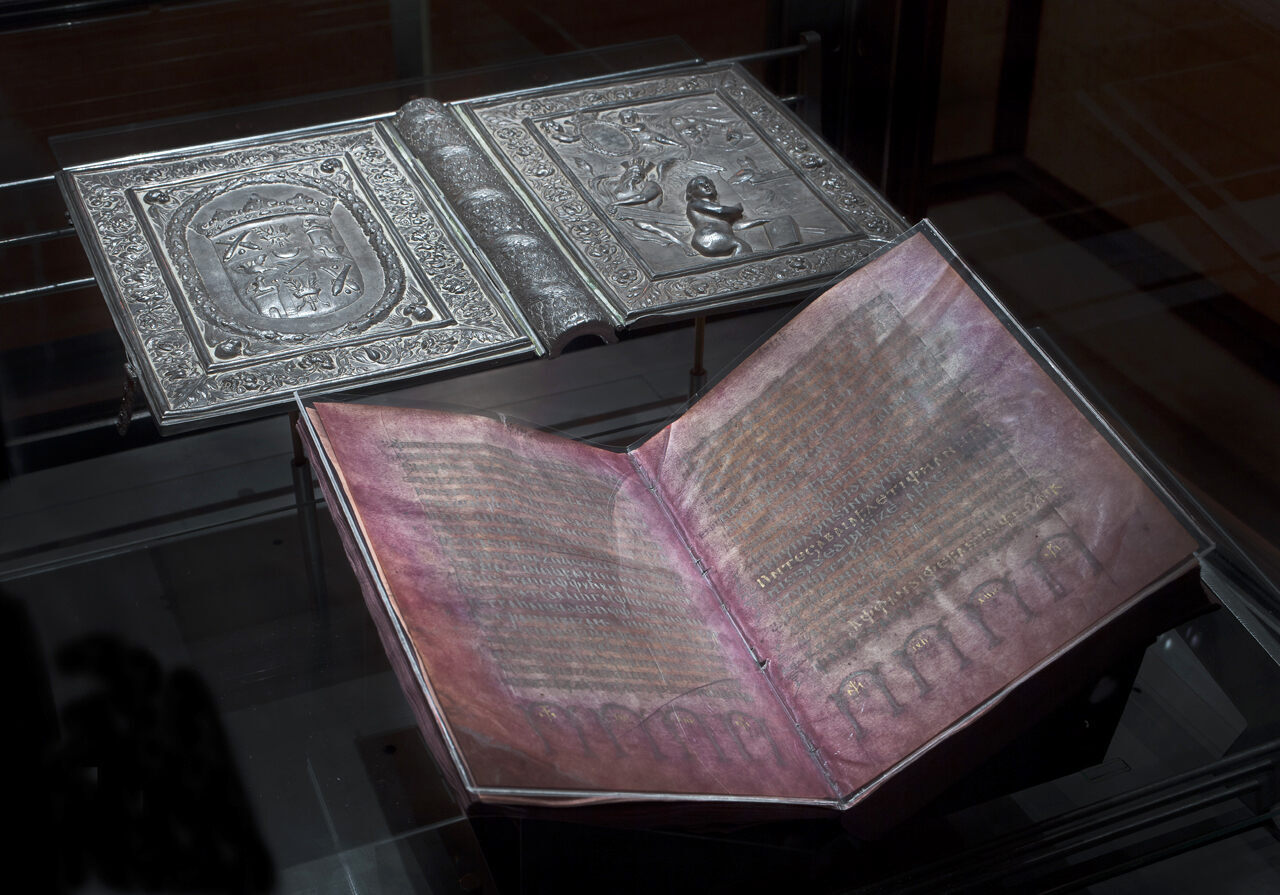 The oft-coveted Codex Argenteus, aka the Silver Bible, is now ensconced behind bulletproof glass at Sweden's Uppsala University. Magnus Hjalmarsson/Uppsala University Library/CC BY 4.0
In This Story
Destination Guide

Tucked into a far corner of the annex to Carolina Rediviva, the main library at Sweden’s Uppsala University, a book sits alone behind bulletproof glass. You might think its remote placement indicates its minor significance. But look closer and you’ll see a work of visual splendor—a uniform script in silver and gold ink, written on purple parchment, as bright and vibrant as if it were brand-new

This is the Codex Argenteus, or Silver Bible. Created more than 1,500 years ago in northern Italy, it was commissioned by the ruler of a people long since vanished. But their lost language is preserved on the pages of the book before you.

Fittingly, the story of how this bible ended up on display at a Swedish university is as mysterious as the book is beautiful.

The codex arrived here in 1669, when Count Magnus Gabriel De la Gardie, a Swedish nobleman of French ancestry, donated it to his alma mater. His hope was that it would remain there forever, and thus strengthen the historical bond between the Swedes and the Goths, a lost people believed to be their ancestors.

But the Silver Bible’s journey to Uppsala began in the sixth century, in the northern Italian city of Ravenna. The king there, Theoderic the Great, wanted to turn Ravenna into a capital city worthy of his imperial ambitions. The Silver Bible was part of his plan, and it’s clearly a book that’s meant to impress—a copy of a fourth-century translation of the Bible from Greek to Gothic, an extinct Germanic language once spoken from the Black Sea to the Atlantic Ocean and the Mediterranean. Of its original 336 parchment folios, only 187 remain today. All of them are dyed purple, a color so expensive to produce in the ancient world that it was reserved exclusively for emperors.

But by the time of his death, in 526, Theoderic’s kingdom had broken apart. Soon after his passing, Ravenna’s importance began to fade too. The Silver Bible disappeared, and for a thousand years its whereabouts were unknown.

In the middle of the 16th century, however, the opulent bible was rediscovered—on a shelf in the library of a Benedictine monastery in Werden, Germany. No one knows for sure how or when it arrived there. Nor does anyone know who found it or broadcast its existence. What we do know is that in 1569, parts of the Gospel of Mark showed up in the Netherlands, printed in Gothic. The origin of those excerpts could only have been the Silver Bible.

Seven years later, in 1576, Rudolf II ascended the throne as emperor of the Holy Roman Empire. An eccentric obsessed with the occult, Rudolf established his court at Prague Castle, where he began collecting books from all over Europe. One of the books he acquired was the Silver Bible.

The book remained in Prague until the end of the Thirty Years War. Though hostilities had ceased by the summer of 1648, the Swedish army staged a final push to strengthen its position at a peace congress then under way in Westphalia. In July, the Swedes descended on Prague, and when the city fell, a looting spree began. One of the books carted off to Sweden by the victors was the Silver Bible. Once it reached Stockholm, it became part of Queen Christina’s personal library.

Magnus Gabriel De la Gardie and Queen Christina were friends, with a close relationship that went back years. But in 1653, after a falling out, the queen banished him from her court. Soon after, she converted to Catholicism, abdicated the throne, and left for Rome. Her court librarian, the Dutch scholar Isaac Vossius, joined her on the journey. Strapped for cash, the queen paid his back salary in books—one of which was the Silver Bible.

For the next three centuries, it seemed as if the Silver Bible had found a safe home. But on April 15, 1995, the book’s existence was upended once again. Two men wearing gas masks walked into the Carolina Rediviva, smashed the bible’s glass display case, and grabbed what was inside. As they ran off, they sprayed tear gas to elude capture. A month later, the stolen goods were discovered in a deposit box at Stockholm Central Station. The perpetrators have never been identified.

Today, the Silver Bible is encased in bulletproof glass, bathed in the soft glow of a light designed to protect its ancient pages. If its benefactor De la Gardie has his way, it will remain there forever this time, in the university’s “eternal possession.”

They could help piece together his life and work.
objects of intrigue

Another reminder that covers can't be trusted.
objects of intrigue

And it's sitting on the shelves at several university libraries.
Video • Object of Intrigue

The Best 18th-Century Toilets Were Designed to Look Like Books

This shit is lit.
Read more
Thanks for sharing!