What It Takes to Build an Anarchist Desert Town - Atlas Obscura
Want to see fewer ads? Become a Member. 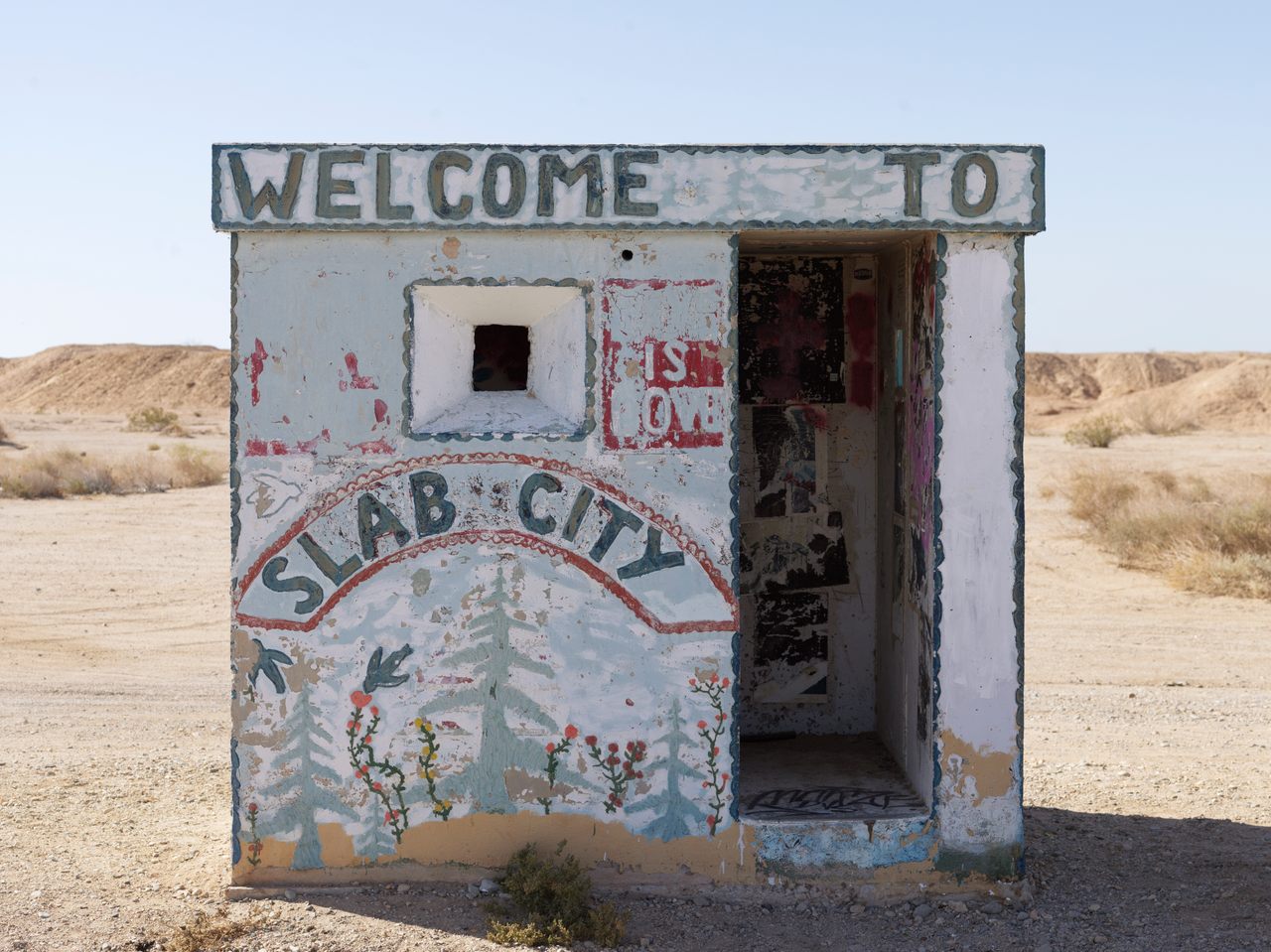 On the perimeter of Slab City. All photos courtesy Donovan Wylie/MIT Press
In This Story
Place

During winter months, this abandoned navy base becomes an off-grid home and alternative living community for thousands of retirees.
Destination Guide

In Slab City, the public library has no due dates and no library cards. The books are organized by section, but not alphabetized. In this anarchist squatter town in California’s Sonoran Desert, established on the empty foundations of a military camp created in the 1940s, the library runs on donations and good will, and if you want to borrow a book, go ahead.

“I decided to honor the anarchist library rules,” says Cornelius Vango, an “anarchist librarian and career tramp.” “I didn’t want people to feel any reason not to take a book. A lot of people are passing through and will never be coming back.”

The current incarnation of the library came to life about four years ago, when Vango moved in. “I had been coming to Slab City for years, and I had never heard of the library,” they say. It had been founded by a woman who went by Rosalie, a librarian by trade, who died in 2003. Her grave is just outside the library. The year before Vango took on the project, a few people had tried to revive it, but the next season the library was in worse shape than before. People had taken the good books, but no one wanted to add new ones because the place wasn’t being cared for. Encouraged by others in town, Vango started rebuilding through salvage and donations. Today the library has thousands of books, divided into fiction and nonfiction sections.

“We’re out in the desert, and there are no building codes,” they say. “I can live how I want, and I can make the library how I want to.”

No one’s ever written a full history of Slab City; it’d be impossible. In a new book Slab City: Dispatches from the Last Free Place, architectural scholar Charlie Hailey gathers some fragments to begin to piece together this past. A survey in 1902 that parceled the land into one of California’s places for “free public common schools.” The establishment of the distinctive concrete slabs, in May 1942, as foundations for a Marines training base. A survey of RVs and travel trailers that started in 1980 and went through 1997, with a peak population of 872 rigs in January 1992.

Hailey, who is a licensed architect and teaches at the University of Florida, has made a study of camps, or any places that muddy the lines of temporary and permanent settlement. Slab City, he found, is unique in the way it taps into three key aspects of camps—autonomy, necessity, and control (or, put another way, desire, need, and power). Slab City’s been called the “last free place,” but that doesn’t make it an easy place to live. “Freedom is something you really have to work at,” Hailey says. “And the people who are living there are putting themselves in a situation where they really have to work at it.”

Even though it is mercurial, there’s been plenty written about Slab City and plenty of photos taken of its residents. “Slabbers,” as they call themselves, also tell their own stories. On Vango’s YouTube page, you can watch a mini-doc “by a Slabber for Slabbers,” take a tour of the library, see what it takes to survive the brutal desert summers, or peek in on live-streamed bar sessions.

In the new book, Hailey and his collaborator, photographer Donovan Wylie, focus on the architecture of the place: the town’s layout, its boundaries, its infrastructure, and the sites people built within the constraints of an anarchist desert city. Building materials are mostly limited to salvage and the desert climate is harsh, but Hailey sees the making of places like this as an important expression of freedom. “They can build whatever they choose to build,” he says.

In the book, Hailey and Wylie visit Vango’s library. “There’s no door because the library never closes,” they note. But the library also can’t close, in a sense. According to the rules of Slabs, says Vango, “You need to occupy a space for it to be yours. If you don’t occupy it, people can come in and take your shit.” If Vango left the library for the summer, for instance, when the desert’s so hot that the population of Slab City drops dramatically, the place would be looted.

This is one of the contradictions of Slab City. There’s freedom, but it has an edge. “In a certain sense, it’s hidden,” says Hailey. “It’s really remote. But it’s also a place of exposure. Everything is exposed there.”

But it’s not a lawless place, exactly. “A lot of people come to Slab City and think they can act however they want without consequence,” says Vango. “It’s a community, and you need to respect people like you would anywhere else. The library is not just the library, it’s also my home. Ask before you try to take pictures. You wouldn’t walk into someone’s yard and start messing with their stuff. You have to respect the space here.”

That being said, drop by. “Everyone’s welcome. Don’t have expectations. Just enjoy your time here,” says Vango. “We’re really chill and friendly. And we really like ice donations.”

Show Us Your Tsundoku!

We want to see your shameful stacks of unread books.
anarchycitieslibraries

How to Resurrect Gold-Rush Era Orchards Ravaged by Fire

The 2018 Carr Fire destroyed historic fruit trees—but not the will to make them bloom again.
science

Buckle up and join Leonardo and his family as they set out from Los Angeles to explore the California desert.
Sponsored by Land Rover
science

Thank these repositories for new and improved citrus, avocados, and more.
Video