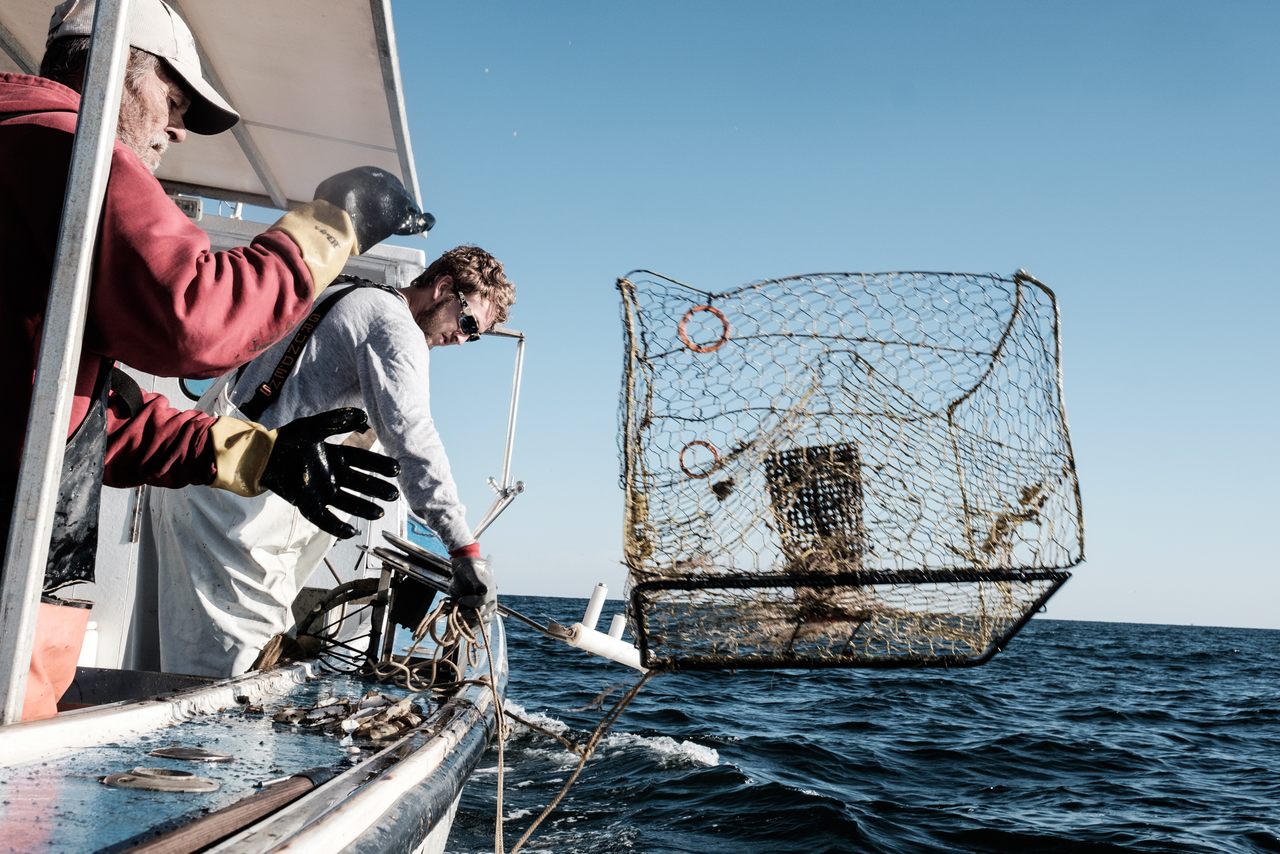 Tyler Tyler misses a crab pot, which is understandable. The seas are already rough this morning, and the sky-blue float marking his pot vaults up and down with the swells. With one hand on the throttle and the other on a gaffing pole, he guns the diesel on his crabbing boat, the Ruth, and whips it around for another pass. Glad Tyler Sr., grandfather and lifelong waterman, doesn’t interfere. This isn’t his boat; he’s just here to lend a hand. Tyler Tyler’s gotta learn.

Their family was among the first to inhabit Smith Island, Maryland’s last offshore settlement, in the 17th century. Since then, Tyler men have fished the Chesapeake Bay. They were born on the island, raised children on the island, and died on the island. Like the other islanders, they spoke a dialect unique to Smith—a slow, sly tongue that, due to the island’s isolation from the mainland, evolved inward rather than outward, building on its own eccentricities rather than absorbing the linguistic tics of the mainland.

Tyler Tyler wears polarized Oakleys, a camouflaged beanie and a faint, fuzzy beard. Were he more like his peers, Tyler would have left the island to live high and dry on the mainland. But he’s not—“I’m not much of a people person,” he says—so he decided to try his luck on the water.

But this isn’t his grandfather’s bay. Crabbing abundance has turned to austerity. Inconsistent harvests and environmental regulations have forced many to abandon the job—more a way of life for men like Glad Sr.— while start-up costs have largely warded off a new generation of crabbers.

Smith Island, once a hub for the crabbing industry, has been forced by environment and economy to contemplate a future without the watermen.

Smith Island sits 12 miles off the coast of Crisfield, Maryland. By boat—the only way to get there—Smith first appears as a low, gap-toothed fuzz of trees on the horizon. Get closer and you can make out homes, hulls, the white steeple of a church.

The roads here are too small for two cars to pass abreast. Most of the houses could use a fresh coat of paint, but there are lights on in the kitchen, clothes flap on the line, and flowers bloom in pots on the doorsteps. Islanders greet tourists with a warm smile and wave, and lest you be disoriented by your trip back in time, a communications tower helps fix you physically and temporally.

In the general store, you can sample Smith Island’s great cultural icons: its cake, and its dialect. The Smith Island Cake, Maryland’s official dessert, may be heavy, with nine layers of sweet cake pressed between layers of frosting with geologic density, but the dialect is heavier. The vowels aren’t vowels, they’re troughs between the peaks of a wave, sloping and wide. Every day, the island elders drift in to pick up a few sundries, maybe order something from the grill, but mostly to chat.

At first, it sounds like a parody of a southern accent, the vowels comically elongated. Down becomes dane. There becomes thaar. Nearby Holland’s Island is pronounced Hallans Ahlan. You can caulk a boat on Smith Island, but it’ll sound like you’re corkin it.

This pronunciation is often and inaccurately described as “Elizabethan,” or “Shakespearean;” in fact, wrote Natalie Schilling, a linguistics professor at Georgetown University, the innovation is original to Smith. In her 2003 article “Fighting the Tide,” she notes: “It seems to have sprung up on the island itself, and it did not attain widespread usage until the mid-twentieth century.”

The island’s most distinct linguistic innovation is “talking backwards,” Schilling writes: the art of saying the exact opposite of what you mean. If She ain’t pretty none, she is. If he ain’t headin’ it none, he should probably ease back on the throttle.

Schilling wrote in an email that while some aspects of the dialogue are eroding, others are proving surprisingly resilient: according to data collected from 2015 to the present, she said, backwards talk is alive and well on Smith Island.

Men like Hoss Parks, a 56-year-old native, tone it down for outsiders. If he doesn’t: “You’ll leave outta here saying, ‘What the heck did he just do?’ I don’t want to leave you baffled,” he says.

If you ask him to baffle you—even if you insist—he’ll just shake his head. “I’m sorry,” he says, “but I’d have to sit with pretty well my own kind to get it right, because every time I look at you I want to laugh, and that ain’t right.” He isn’t being mean, and his chuckle is warm: if you aren’t from here, it’s obvious. You just ain’t from here.

Parks owns a television, which is tuned to an old black-and-white movie, but it’s a recent addition. He doesn’t own a computer. He figures the dialect comes from this isolation, both physical and cultural: “You’re around with no TV all your life, and no radio, and just reading books and talking to your neighbors. If you haven’t got much to say, you ain’t got much to say.”

It takes a few days to realize that Parks might be talking backwards.

According to the Maryland Department of Natural Resources, the Chesapeake Bay will rise between 2.3 and 2.9 feet within the next 100 years. Dr. Donald Boesch,* a climate scientist with the University of Maryland Center for Environmental Science, says this could render Smith Island uninhabitable “before the end of the century.”

“I don’t go to bed worrying over it,” said Eddie Somers, a native islander and president of Smith Island United, a citizen’s group. He references nearby Spring Island, a flat pad of marsh that can’t rise more than two feet above the bay: if the seas were really rising, wouldn’t they swallow Spring? Even Holland’s Island, nominally submerged, still has a few stands of hardwood trees marking it on the horizon.

But even if the seas aren’t rising, he says, they’re certainly eroding the island. Strong storms and floodwaters released shave feet of Smith’s beaches and marshes, bringing the waterline closer and closer. When the state opened up Conowingo Dam in March 2011 to prevent the Susquehanna River from flooding, the water rushed down the Chesapeake and overtook Smith Island, bringing the sea to Hoss Parks’s front door in Ewell.

In 2013, after Superstorm Sandy ravaged the northeast, the Maryland Department of Housing and Community Development earmarked $1 million to buy out Smith Islanders. They rejected the offer and formed Smith Island United to present a counteroffer. Instead of abandoning Smith, they said, the state should invest in the island, and fortify it against the erosion.

Working alongside state planners, Smith Island United produced the Smith Island Vision Plan, an ambitious and optimistic roadmap that envisions a full-on renaissance for the island. Under the plan, new jetties will protect the island’s major settlements. Tourism will boom during the summer, and more year-round residents will stick out the Chesapeake winters. The ranks of watermen will swell, even as they work with state authorities and conservation organizations to sustain the fragile blue crab population.

It’s wide-eyed, almost utopian, but Somers reels it in: nobody on the island wants to be St. Michaels, a mid-bay town in the style of Hyannis. “We don’t want 300 condos,” he says. “We want to stay just the way we are. We like our quiet lifestyle.”

But Boesch trusts his data, and the data is clear: if current warming trends persist, the front yards of Ewell will eventually be swallowed by rising seas. “The rate is relatively slow, compared to the natural fluctuation of the tides and wind effects, so it is hard to ‘see,’” he says, “particularly when one doesn’t want to believe it.”

If Smith Island sinks, Hoss Parks says: “I’ll be here when it goes under. And I’ll just say”—he raises a hand in salute—“God save the queen, glug glug glug.”

*Update: The story originally misstated that Dr. Boesch worked at the Maryland Department of Natural Resources.

Tracking Bumblebees Based on Their Buzzes

The technique could be a boon for famers who rely on the services of pollinators.
languagevideofeatures

The Rhythmic Art of Stick Pounding

Maere, mara, mahr, mahrt, mårt—by any name, it was and still is a terrifying visitor.
language

How the Internet Changed the Meaning of 'Mamihlapinatapai'

An untranslatable word used among the few members of the Yaghan tribe has attained an odd sort of online fame.
hats

What Do You Call This Hat?

The strange case of the knit cap and its many, many regional names.
Video • AO Docs